Homer & Wyeth in the studio

You can’t tell much about a painter or a writer from the place where they painted or wrote. That’s true even when the wax apples and fruit bowl are still on a table, as in Cezanne’s studio, or the outline of a novel is written on the wall, as in Faulkner’s study.

Nevertheless, many people (and I’m certainly one of them) are moved by the chance to stand in the space where someone else’s brain, eye and hand created wonderful things. For lovers of American painting, there’s a chance to do that at two places within a hundred miles of each other on the Maine coast. The destinations are the Winslow Homer Studio, in Prouts Neck, 12 miles from Portland, and the Olson House in Cushing, south of the mid-coast town of Rockland.

Winslow Homer (1836-1910) made many of his narrative paintings (“Lost on the Grand Banks,” “The Gulf Stream,” “Fox Hunt”) and virtually all of his seascapes in the oceanside studio, in which he also lived for the last 25 years of his life. Andrew Wyeth (1917-2009) painted in the Olson House for 30 summers. Its occupants, an eccentric brother and sister, their farm and the building itself were frequent subjects of his paintings, most famously in “Christina’s World.”

Both sites were rescued from destruction or decay. The Olson House has been open to the public since 1993, the Homer Studio only since 2012. Each place reveals (and hides) its famous occupant in different ways.

A visit to the Homer studio requires planning, and in some seasons, patience. It is owned by the Portland Museum of Art, which runs two tours a day, each accommodating only 10 people at $55 a head.  When I first tried to get one, in August 2013, registration was filled six weeks out.

A van carries visitors from the museum to the studio, a 25-minute ride that allows the docent to describe how the Homer family came to buy land on Prouts Neck, the area’s history as a summer resort, and the six-year, $3 million rehabilitation of the studio.

Homer moved to the Neck in 1883 from New York City. His father and brother offered to provide him with a studio in the compound’s main building, called “The Ark.” Winslow, however, wanted his own place, and claimed the carriage house. He had it moved 100 yards away and closer to the ocean — a decision with both symbolic and practical effects. He also had a balcony, called the piazza, built across the entire water-facing side.

Homer was a bachelor, a dandy, an outdoorsman, an intermittent grump. Some scholars believe the trauma of the Civil War (which he’d chronicled as a newspaper artist) or unrequited love (of a woman or man) led him to an intensely private life. Whatever the reason, the studio has a monastic feel.

The big downstairs room is dominated by a fireplace in which Homer cooked some of his meals.  (Others he got from a nearby hotel by displaying a flag outside the house whenever he wanted a meal delivered.)  The walls are unpainted headboard.  The decor includes several dessicated and mounted fish skins.  There’s a hand-painted sign announcing the presence of snakes and mice, which he put outside to discourage visitors.

Upstairs is another large room, where he painted until a room for that purpose was added on the ground floor. There is no bedroom described or displayed.

Thankfully, visitors are allowed to linger on the piazza, with its view of rock ledge, ocean, islands and whatever boats may be passing by. It is from there a person can see a bit of what Homer turned into his famous “marines”–the paintings of crashing waves, anthropomorphic pillars of spray, weather-blown grass and bush, water and sky barely distinguishable from one another.

A webcam on the roof provides a daylight feed of the view to the lobby of the Portland museum.

Homer had a wonderful eye, and this place continuously beckoned it.

When a school of herring arrived offshore in the summer of 1884, he had a local boy row him out so he could watch fishermen hauling fish (“The Herring Net”). A decade later, he was sitting outsidethe studio smoking with a nephew one summer evening when he leapt up and said, “I’ve got an idea! Good night, Arthur,” according to one account. He painted until 1 in the morning and produced “Moonlight, Wood Island Light.”

But he wasn’t a literalist. It’s often hard to see the paintings in the landscape. “Cannon Rock” shows a piece of ledge jutting over the water and a wave breaking on an offshore bar. Those are events that occur at high and low tide, respectively, and thus never at the same time.

The tour, including the van ride out and back, takes 2 1/2 hours. It’s not enough time, especially at the price. The docent’s lecture and slideshow at the studio lasts too long; I wanted more time to explore both the house and the grounds.

That isn’t a problem up the coast at the Olson House.

Visitors may wander almost unrestricted through the 14-room structure, which is owned by the Farnsworth Art Museum in Rockland (which also has a large collection of Wyeth paintings). Weathered nearly black, it was built in the late 1700s, gaining its present appearance and a third story a century later. It’s a “saltwater farm” on a spit of land called Hathorne Point, although the water is less visible than it once was, and most of the outbuildings are gone.

Andrew Wyeth first visited the farm in 1939 on his 22nd birthday, brought by the teenage daughter of a family summering nearby. (They would marry the next year.) He also met Christina Olson that day and painted a watercolor — the first of 300 paintings he made there.

Olson had a neuromuscular disease that began in childhood. (It may have been Charcot-Marie-Tooth disease, and almost certainly wasn’t polio, as often claimed.) When Wyeth met her in her mid-40s, she couldn’t walk. Indoors, she transferred from chair to chair using her arms. Outside, she dragged herself over the ground, the strategy depicted in Wyeth’s most famous painting.

Both Christina and her brother, Alvaro — neither ever married — slept on the ground floor. The rooms above were unoccupied. Wyeth set up an easel in one of them and came and went as he wished. (His family had a summer house nearby). He painted some pictures of Christina and fewer of the shy Alvaro. His tireless models were the house’s rooms, the views out the windows, the battered exterior.

The kitchen and pantry today contain a few household objects and pieces of furniture. A poignant relic is a wooden dory in the loft of a shed attached to the house. Alvaro gave up lobster fishing when his sister’s disability became so severe that he had to be around during the day. The boat has never been moved, the docent said.

Most other rooms are empty. The house’s contents were sold at auction in 1968, although a few have since trickled back. Someone donated a rocking chair last summer.

What the Olson house displays is what can’t be taken away: the play of light on walls, the landscape seen through glass, the texture of worn wood and nubby plaster. They are among the things that make Wyeth’s art so memorable and moving. To stand alone in a room and look out the same window (different frame) he depicted in “Wind from the Sea” is to experience some of the “hair-standing-on-end” sensation he recalled he had upon opening the window one summer day in 1947.

What’s not obvious in the house (and even less in the pictures) is the inescapable fact that Christina and Alvaro lived in shocking squalor and poverty, even by the standards of rural Maine 75 years ago.

The house had no running water, and for most of the time the Olsons lived there, no electricity. There was no bathtub. A nephew recalls that the door into the kitchen left a four-inch gap to the outdoors, through which the winter wind howled. They burned 14 cords of wood a year, much of it stacked inside. Christina was incontinent and the house stank of urine. At the end of her life, there were too many cats.

Wyeth emphasized the Olsons’ dignity and self-reliance. Whether he owed them more is a matter of debate. He didn’t pay rent or modeling fees, but did sometimes cover bills at the general store. He stopped painting there in 1968 after Christina died. (Alvaro had died three weeks before her.) But he eventually returned.

At the family graveyard down the hill (that Christina may be crawling back from in “Christina’s World”), his is the first headstone you see.

Here are some photographs of the Olson House that were not published with the story.

The Olson House in Cushing, Maine.

Old front door, in front of which a road once passed.

The view of the house that is seen in Wyeth’s 1965 painting “Weatherside.”

Hops that are said to have been planted by Christina Olson still grow and flower each year. 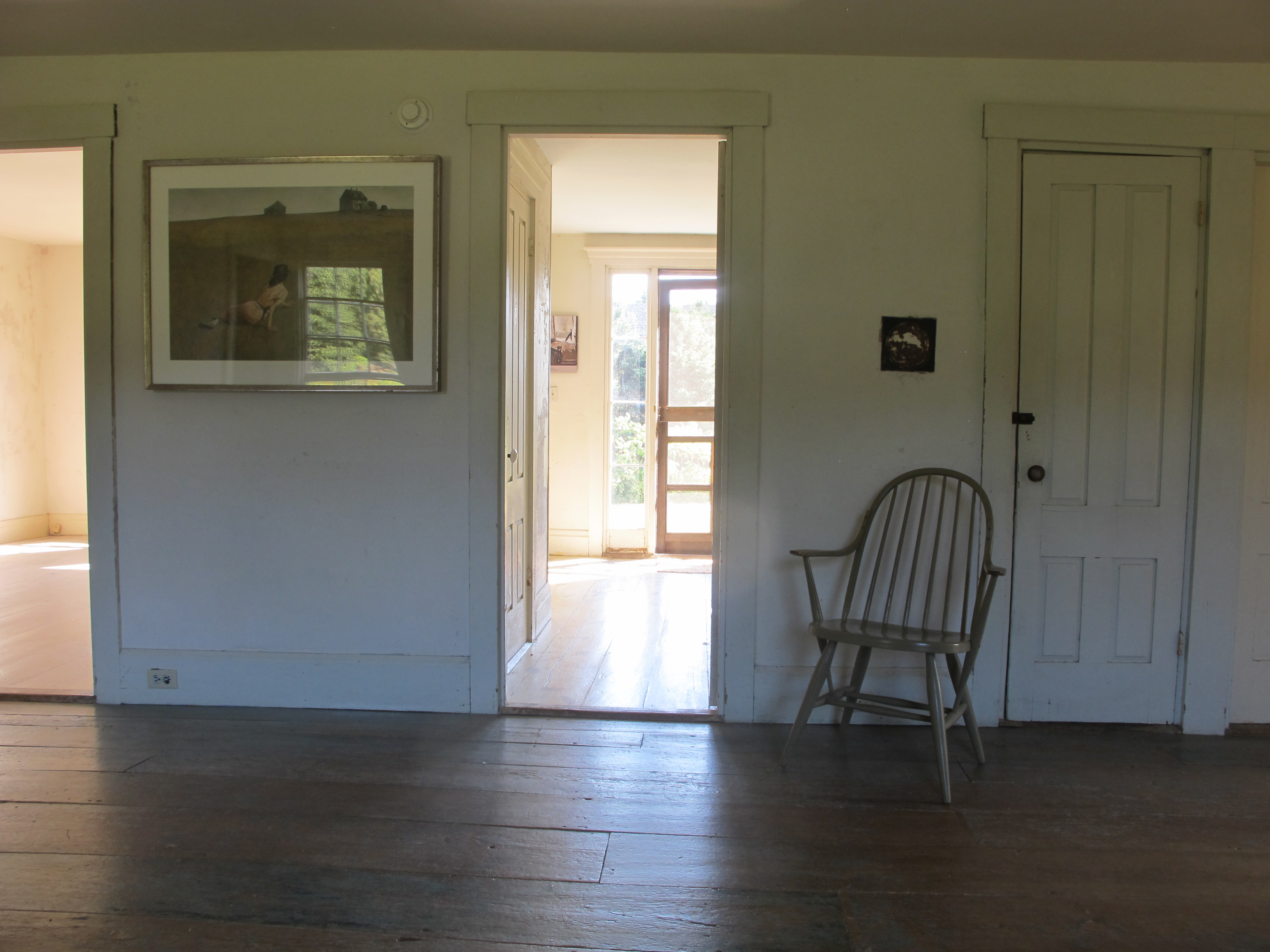 View from the living room out to the front door.

View from the shed through the kitchen and pantry to the living room. Wyeth painted this door and one out of view to its left in the 1968 watercolor, “Alvaro and Christina.”

A window in the kitchen. 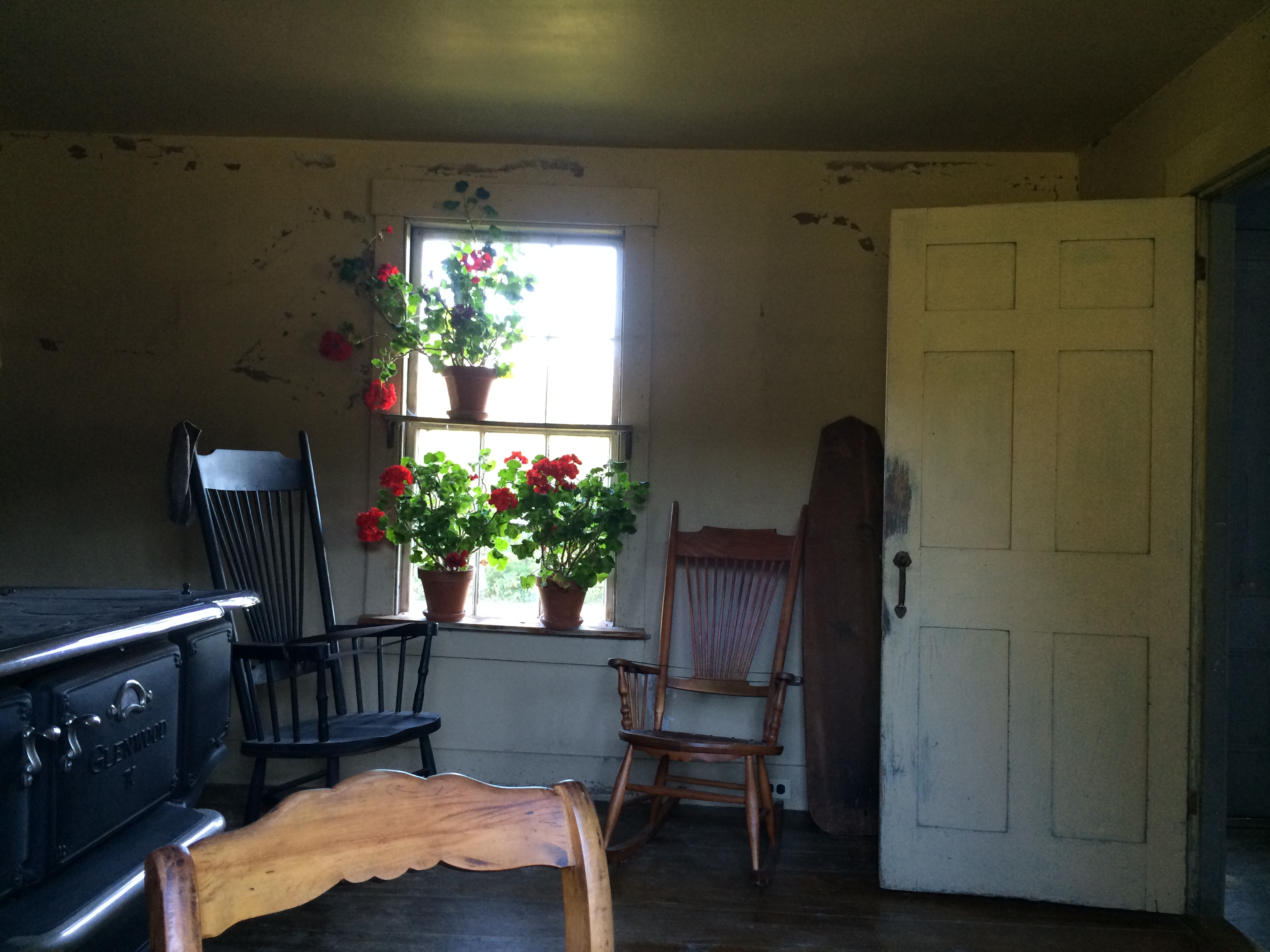 Another view of the kitchen.

The other door in the shed depicted in “Alvaro and Christina.”

Alvaro’s lobstering dory in the hayloft, reportedly never taken down since the day he put it there after giving up fishing to take care of Christina.  The door to the privy is on the left.

A rare (but allowed) view into the two-hole, outhouse-style privy.

Remnants of things pasted to the privy wall.

A close up, from long ago.

The window (not original) in the 1947 painting “Wind from the Sea.”

And the window today.

For most of Christina’s life the house was without electricity. 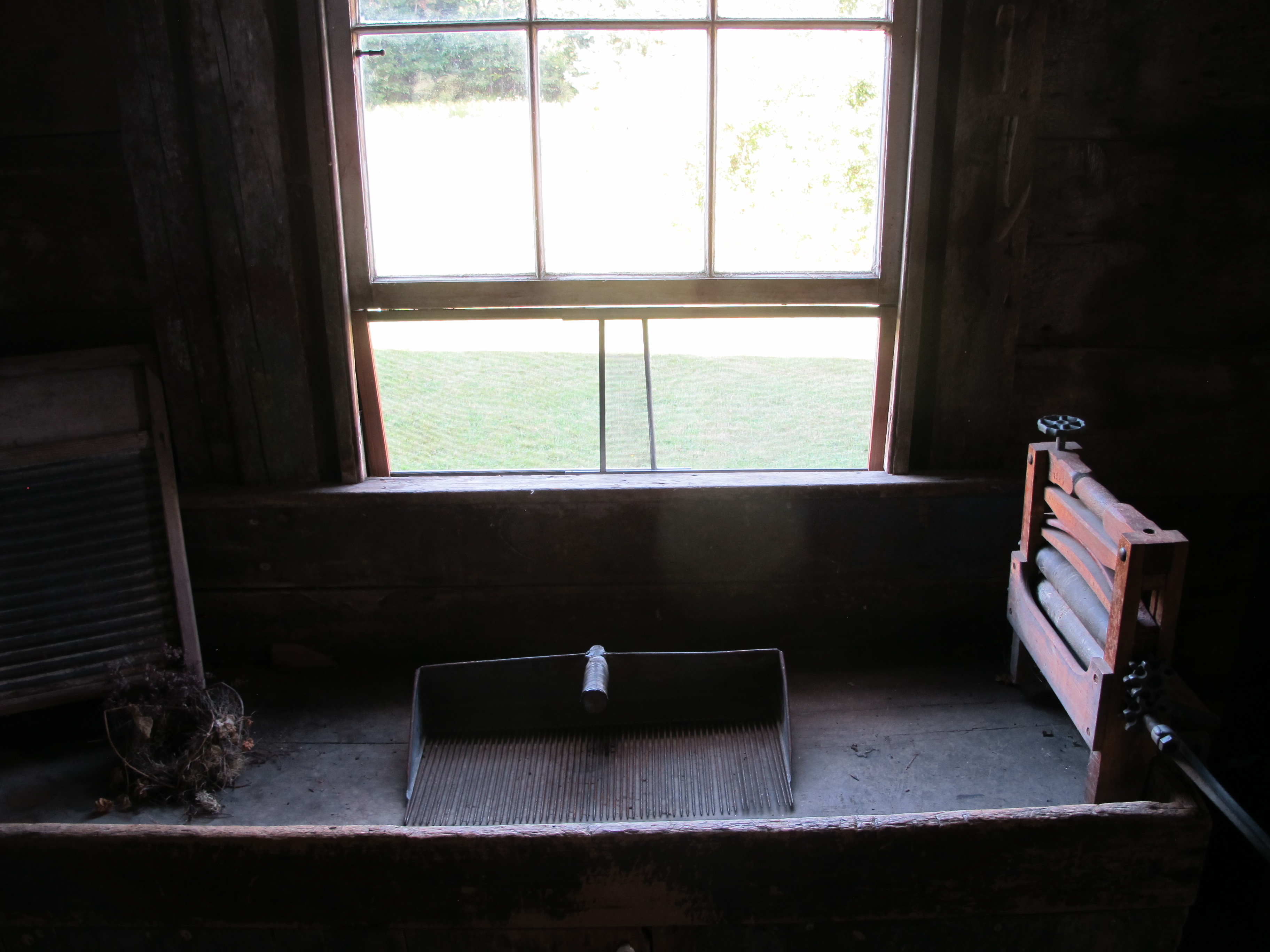 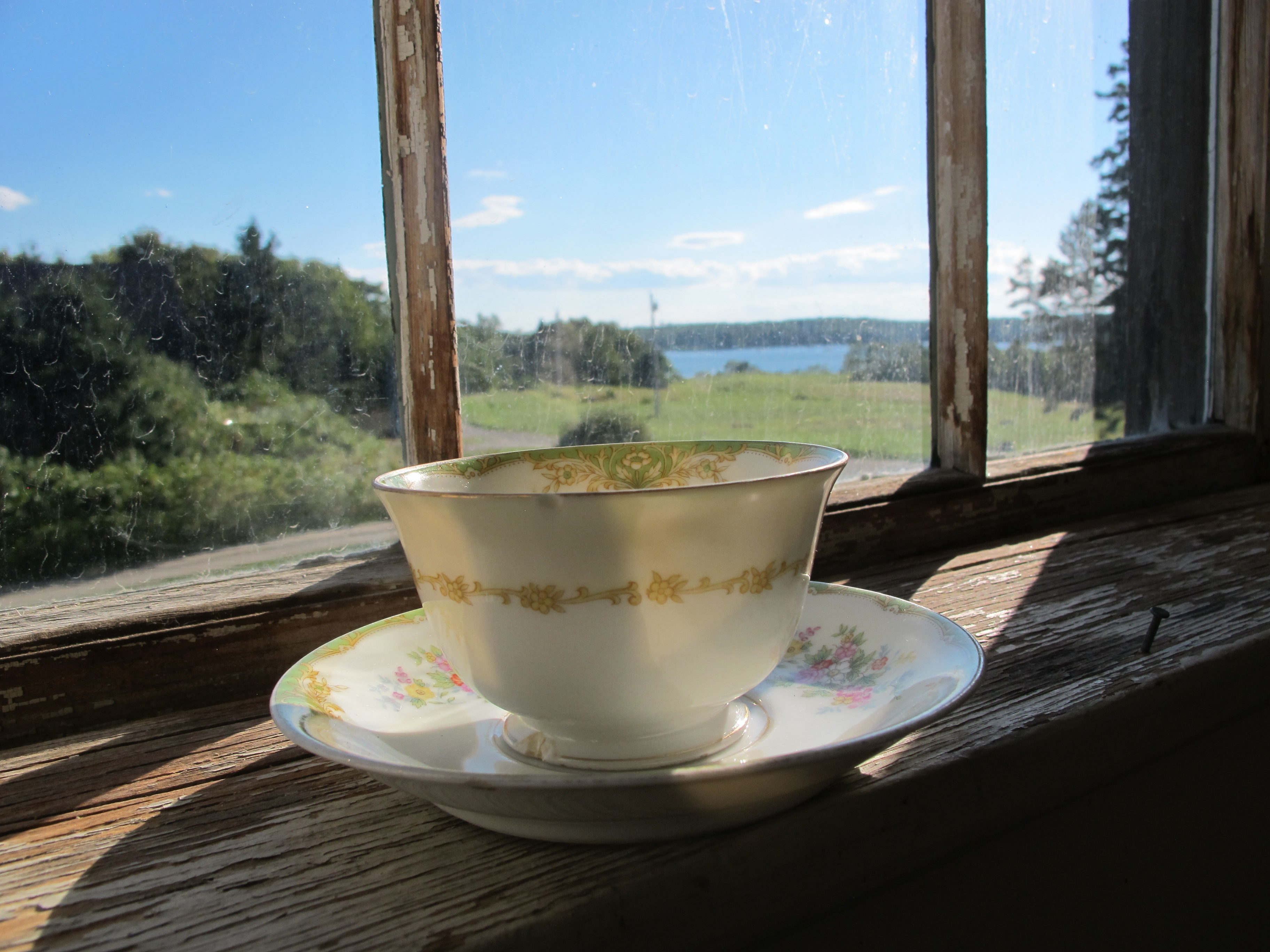 Gravestone of Christina and Alvaro Olson, sister and brother.

Deep in the heart of Big Bend