The emptiness of the Highlands, especially the western half, is eerie.  I walked alone most of the first 10 days of The Great Outdoors Challenge.  By alone I don’t just mean I didn’t meet Challengers, but that I saw no one.  I more than once walked an entire glen–which is to  say, a river valley–and saw no person, no car, no house.

What I did see was the remains of former habitations–the collapsed stone walls of cottages, barns, and animal enclosures used by people hundreds of years ago. 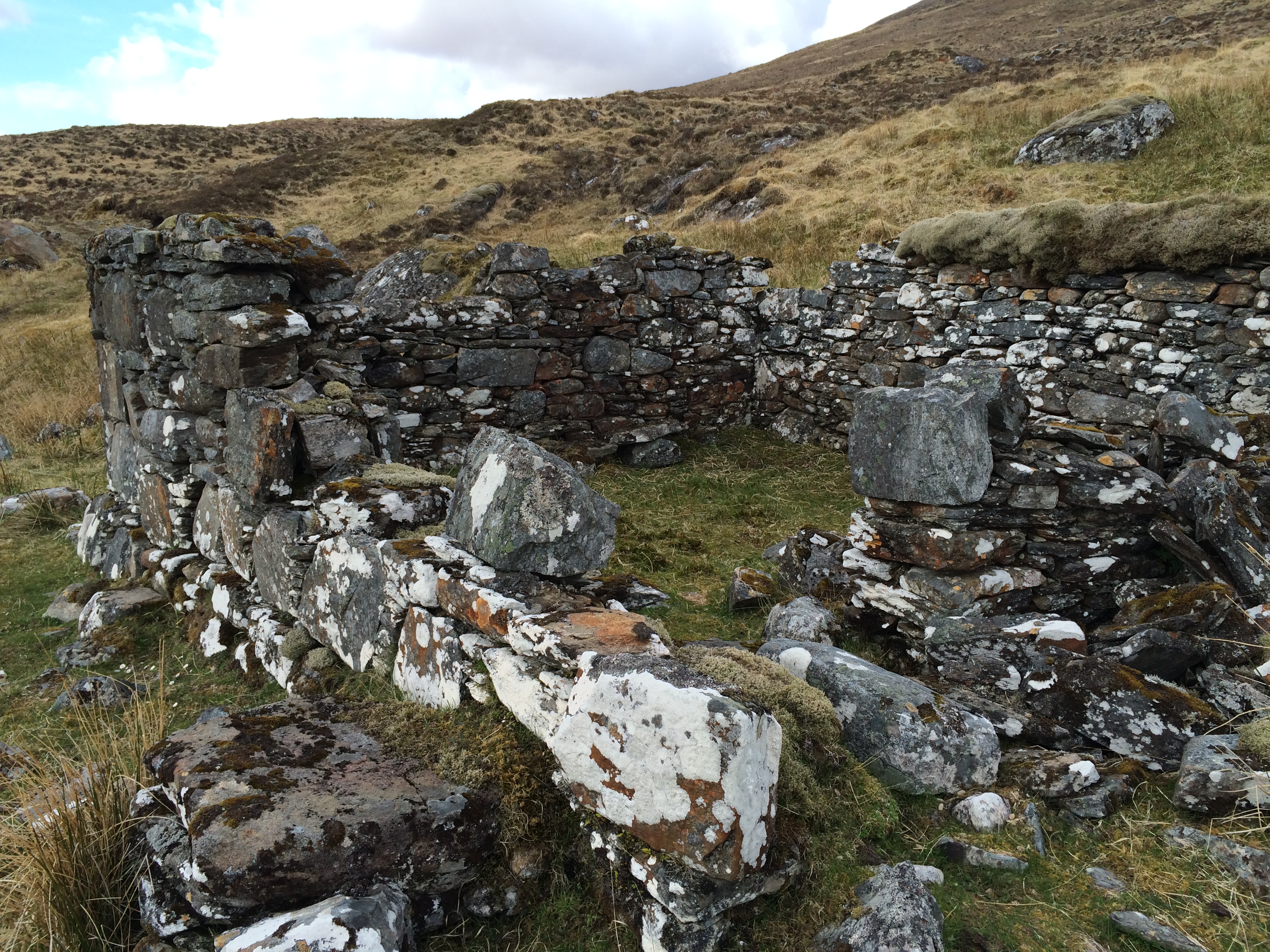 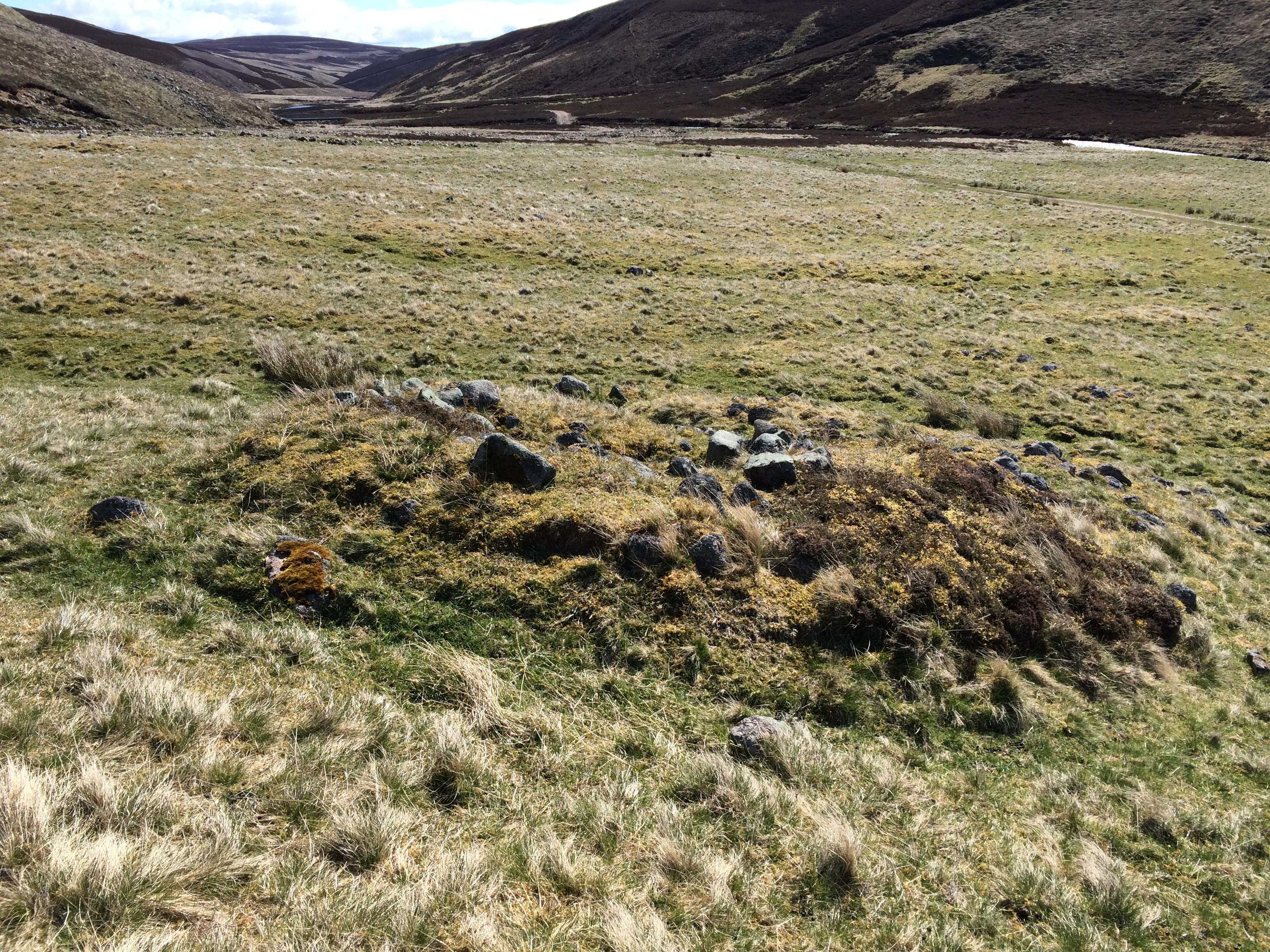 The abandonment (and, in some cases, the physical collapse) of these buildings didn’t occur by accident.  It was the consequence of a economic policy that replaced subsistence tenantry with industrial-scale sheepherding.

The Highlands was once filled (“filled” being a relative term, of course) with people growing oats, potatoes and kale, and keeping sheep, goats and cattle.  They paid small rents to huge landowners, many of them English aristocrats who didn’t speak their language.  They lived in small settlements, often no larger than four or five families. 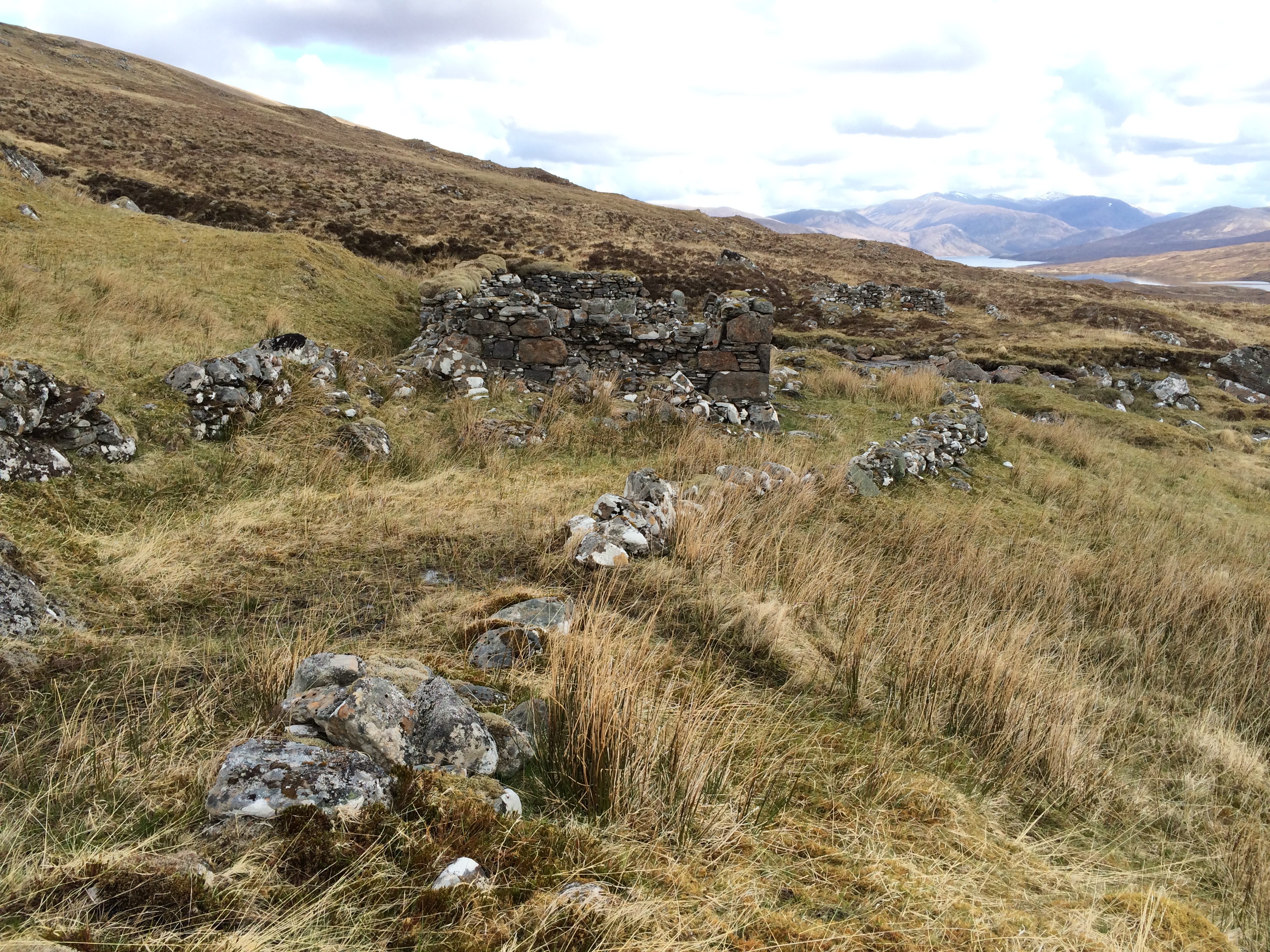 Many houses were divided, one-half for the people, one half for the animals. The duplex design can still be seen in the remains. 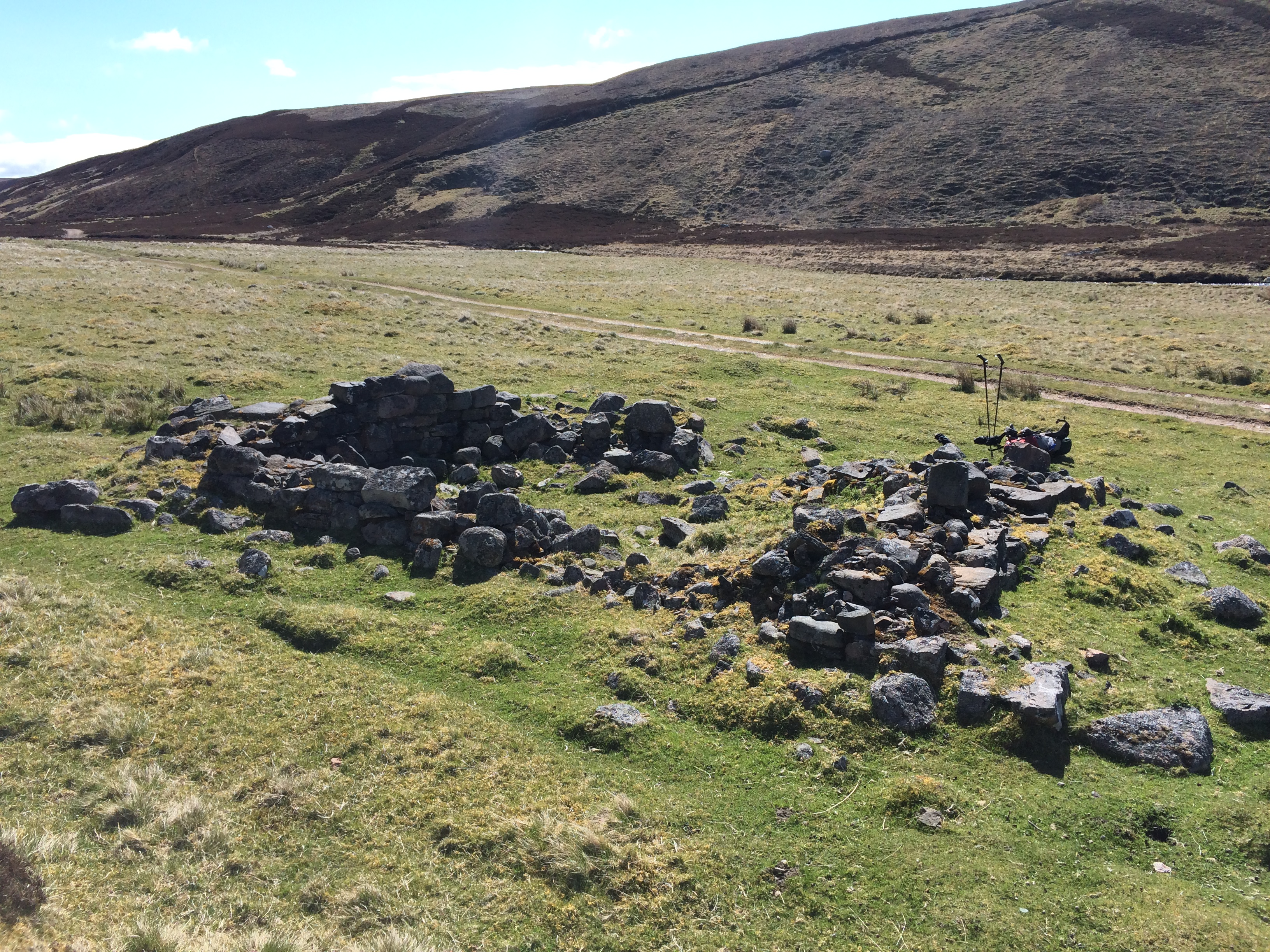 And here.  (The plastic containers hold mineral supplements for sheep.) 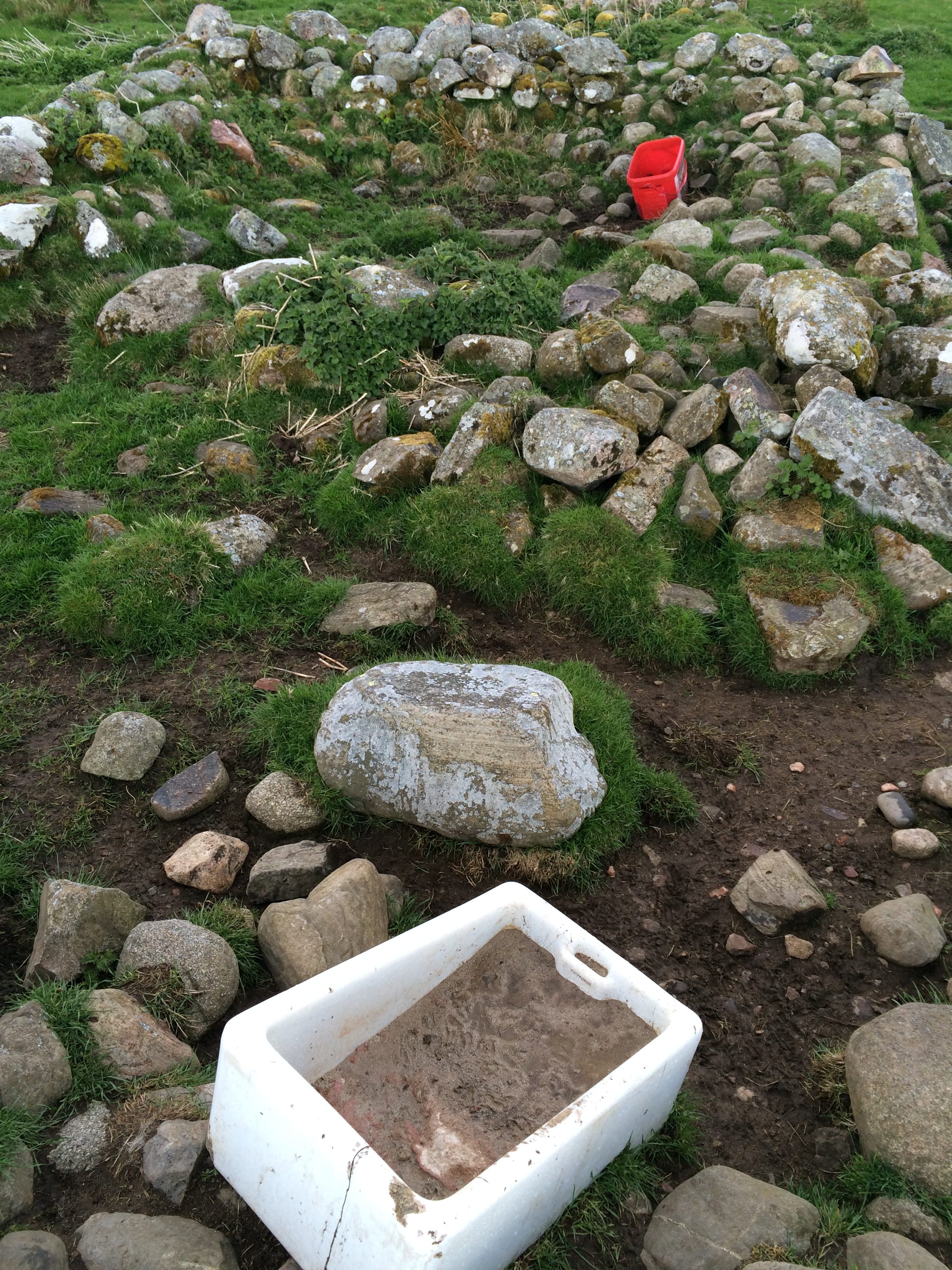 The roofs were of thatch or turf, and many had no chimneys, the smoke from an open fire exiting through a hole in the roof.

People disappeared from the Highlands over the course of 75 years, with the principal periods of eviction being 1782-1820 and 1840-1854, according to “The Highland Clearances” (1963) by John Prebble, which is the source of most of the information in this post.

The removal of people and the introduction of sheep (and a small number of shepherds, who were mostly people from the south) was termed “Improvement.”  It was defended as a program of economic rationality. As wool was a valuable cash crop and sheep were animals that required little husbandry, the change allowed estate owners to charge higher rents.  (The owners rarely ran the “sheepwalks” themselves, instead renting land to farmers and companies that did).

The new economic model was also justified by some (usually the evictors) as a way of saving Highlanders from their poor and miserable existence.  Sometimes evicted families were provided plots of land on the coast and urged to become fishermen.  However, the tenants knew nothing about fishing, the seaside land was less fertile than the river valleys they came from, and the weather was often harsher.

One of the best-documented episodes of this period was the eviction of more than 5,000  people from the valley of Strathnaver that began 201 years ago this month.

George Granville Leveson-Gower, an Englishman with five titles known principally as “Lord Stafford,” had an estate of 1,735 square miles in the shire of Sutherland on the peninsula in the far north of Scotland that juts into the North Sea.  It is well northeast of where I started from.

The evictions were carried out by Stafford’s commisioner, William Young, and his factor, Patrick Sellar.  In mid-December 1813 at a place called Golspie, Young declared in English that the first evictions would begin on Whitsunday, in mid-March.  The announcement was translated into Gaelic by the local minister.

Sellar enforced the orders.  People who hadn’t moved by the deadline had their houses burned.  “In previous removals the evicted had been allowed to take their house-timbers with them for use in the building of new homes,” Prebble wrote.  “Now it was learnt that the moss-fir was henceforth to be burned when it was torn from the cottages.  The people were to be paid the value of the wood, or the value which Sellar set upon it, but this was no compensation at all in a land so sparsely timbered as Sutherland.”

Sellar’s action caused such outrage that two years later, in April 1816, he was put on trial for murder and other crimes stemming from the evictions.

The deaths included an old woman, Margaret Mackay, who was carried from a burning cottage in a blanket,  whose scorched fabric was publicly displayed as a symbol of the outrages.  Another was Donald  MacBeth, an old man with cancer who lived with his son.  The son had to go away for several days and removed part of the roof of the house, hoping that would convince Sellar and the house-burners to hold off further destruction until he returned and removed his father. It did not. The son returned to find his father huddled outdoors against a wall of a smoking ruin; he died soon after.

The evidence did not persuade the jury of 15 men, none of whom were tenants.  They acquitted Sellar in 15 minutes, Tallahatchie County-style.

The evictions resumed, but without the burning and wrecking of buildings until people were out.  Sellar was generous enough to invite the tenants back to harvest their grain when it was ready.  However, without barns for storage they had to carry the crop on their backs through snow that fell early–in October–in 1816.  “Others came down from the north to dig what they could from beneath the snow and eat it there, cooking a few potatoes among the ruins of what were once their homes,” Prebble wrotes.

[My post-Challenge host, Paul Richard, brought to my attention this passage from the book “Stone Voices:  The Search for Scotland” (2002) by Neal Acheson.  It shows the Scots have long memories.

[“Not long ago, I met somebody who witnessed a remarkable scene in an Easter Ross churchyard.  A Canadian family was visiting the place, probably in search of ancestors.  They came across a tomb which seemed to surprise them.  The head of the family, a middle-aged man in a baseball cap, urged his wife and daughters to walk away.  When they were out of sight, he glanced around, unzipped his trousers and pissed at length on the grave of Patrick Sellar.”]

And so it went, all across the Highlands.  The Clearances are the reason for the huge Scottish diaspora in Canada, the United States, Australia and New Zealand.

I walked by many abandoned buildings during the Challenge.  Many date from after the Clearances. 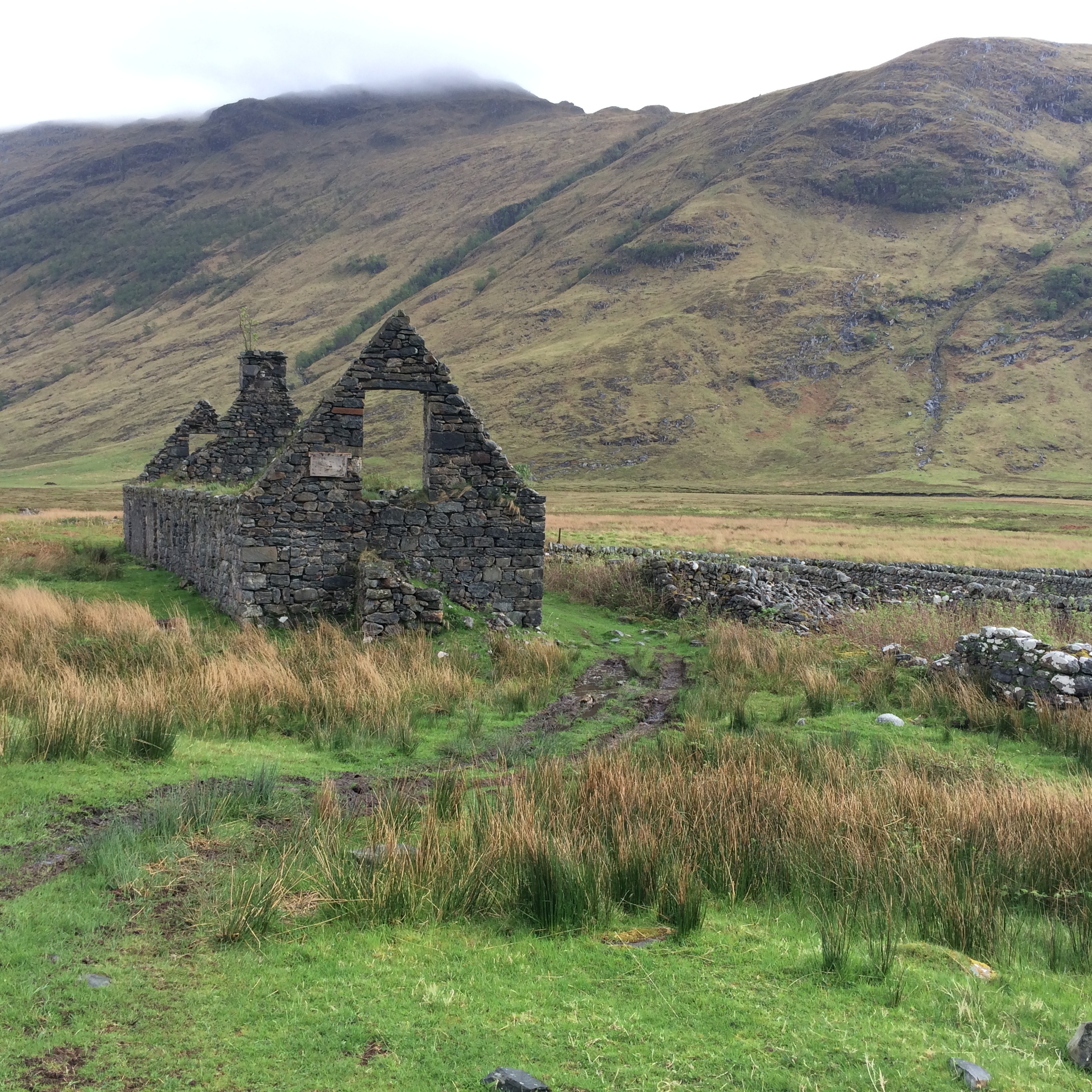 It’s the older ones I find most moving, in part because it’s so hard to feel the presence of the long-departed occupants. These ruins are being reclaimed by the land.  But it will be a long, long time before they are gone.

Early in the walk I stopped at the remains of two buildings separated by a stream you could jump over.  It had been a tiny hamlet, or possibly single homestead. 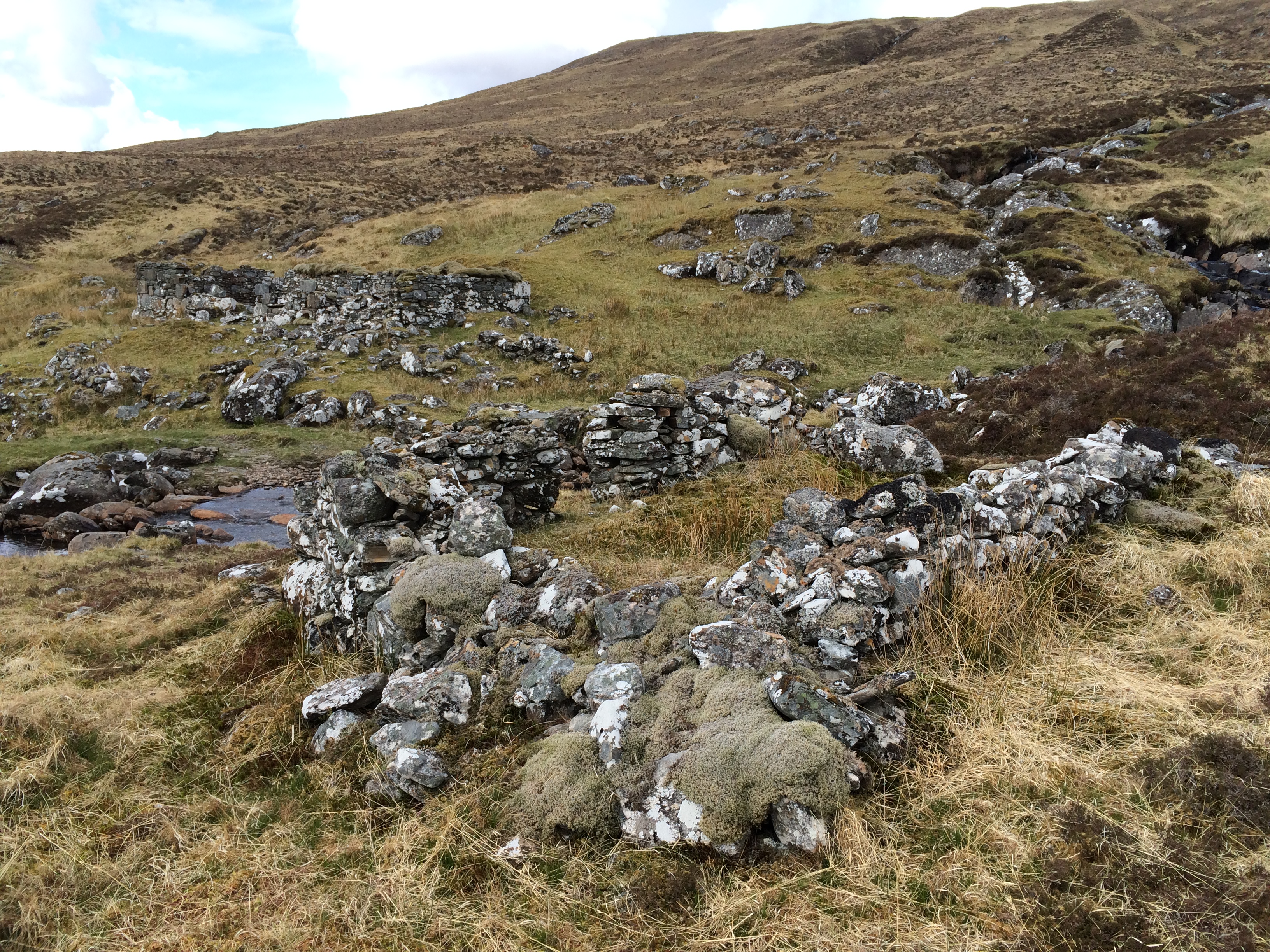 The uphill wall of one structure was covered with moss.  The moss represented decades of growth that would one day return the ruin to peat-over-stone, like so much of the rest of the Highlands.

Today, however, it looks like a family of seals that has hauled itself out of the sphagnum sea to take the sun. 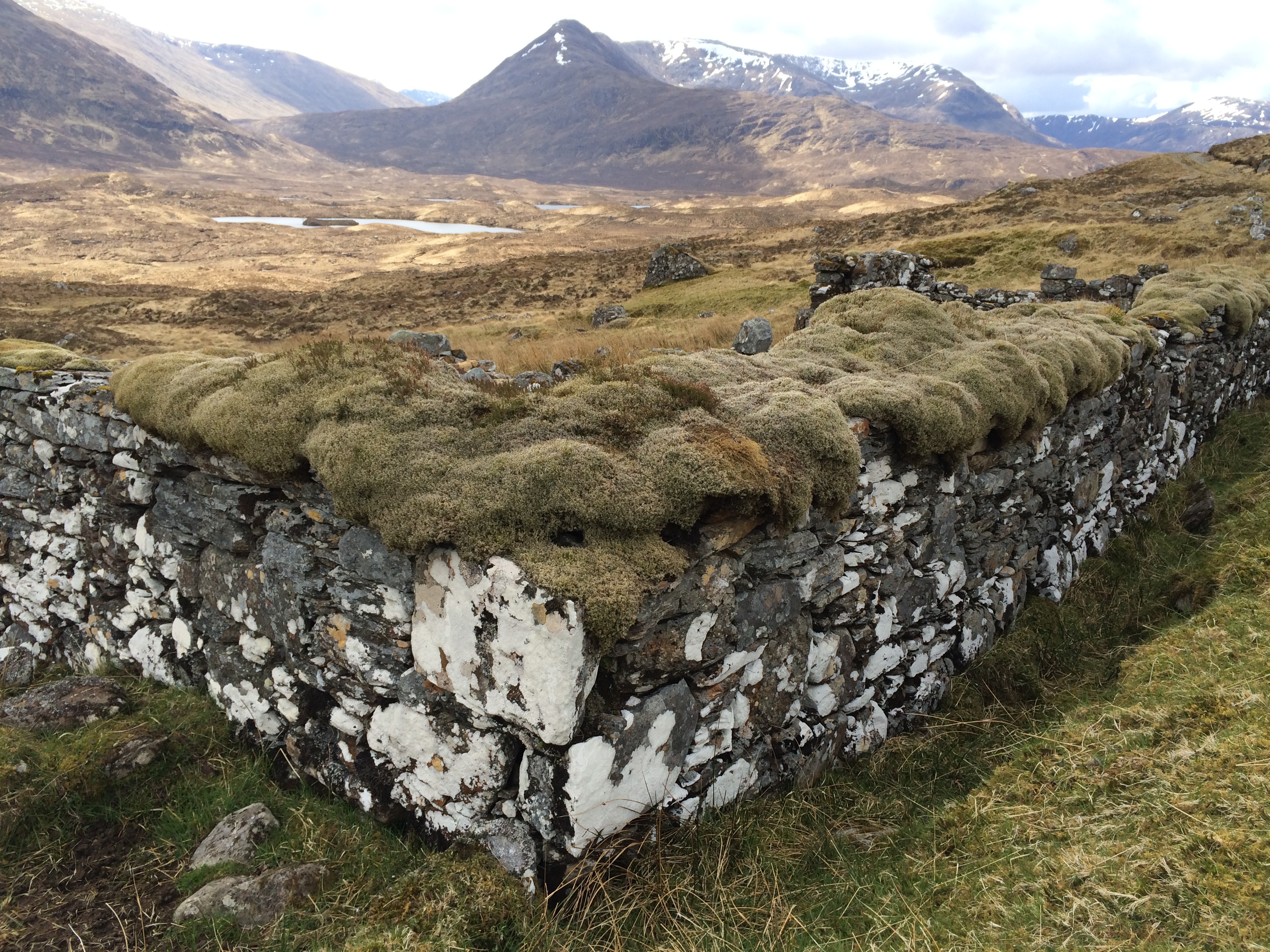 Scenes along the way