I spent nearly the whole open period of the one-room Beauly library (10 a.m. to 12.30 p.m.) using the Internet and listening to the chitchat between the half-dozen visitors and the librarian.

Then it was down the road again. I passed a horse. Or perhaps it was a donkey. 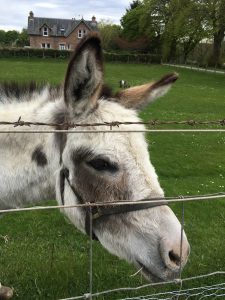 I passed something that was marked Moniak Castle on the map. The wall was covered with vines. This door hasn’t been closed in a while. I peeked into the driveway but didn’t see a castle. 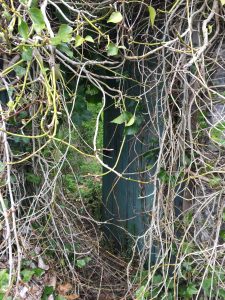 I eventually got to a forest with a small parking area and the trail head of several short hikes. My route, however, had me going up a hilly road and into the woods in another direction.

I did this, but soon found myself on a gravel road not on the map and, according to the GPS signal, not on my route. Bushwhacking to get back to the path seemed like a lot of work, so I decided to continue on the road as long as it was going uphill, as I knew I had to go over the top of a ridge eventually.

By this point it was drizzling, which it continued to do for the next five hours. The road eventually terminated at a large chalet-style building surrounded by construction equipment and split wood covered with a blue tarp. There were also a few old cars, but none that appeared to have been recently parked.

I walked onto the back porch and considered taking the pack off and eating a snack. A skeleton key was in an old lock in the back door. I looked in and saw carpentry tools and two pairs of boots. I tried the door. It was locked, so I turned the key, unlocked it and stuck my head in. I called hello several times. I heard music coming from upstairs and called again.  No answer.

I decided I didn’t want to go tramping up the stairs and surprise whoever was there, so I headed off through all the stuff to the open hillside, going in the direction I knew the path must lie. The ground was wet and it was cold. I stopped and put on mittens. I found the path eventually, crested the hill and came down.  It was a bleak and beautiful landscape. 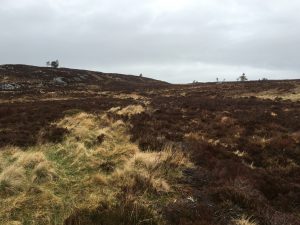 The path eventually connected with the Great Glen Way, a walking and biking trail that goes from Fort William to Inverness in a diagonal across  the Highlands. As I was coming down the final hill into the outskirts of town I saw about 20 people running up the hill in the rain. I asked if they were a triathlon club. One of them managed to get out: “We’re a hill-running club.” They passed me again, running downhill. And then again, running uphill. 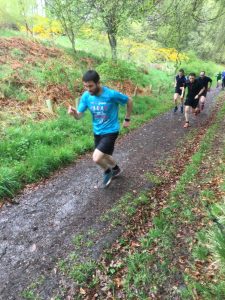 By the time I arrived at a “caravan park” in Bught Park on the south end of town my boots were soaked and I was pretty cold. I checked in and paid my £10. The place had at least a hundred trailers, and in a separate area, five tents. Three of them were occupied by Challengers, and in one of them was Anthony Driscoll, whom I’d walked with earlier.

Soon after I set the tent up the rain stopped. After I got the boots off and different pants on, and the freeze-dried “Moroccan couscous, with chicken and mild spices” under my belt, I felt better. After dinner, I invited Anthony and another Challenger named Mark Janes over to visit. 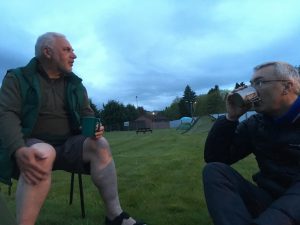 Anthony brought a half-bottle of wine, Mark a wee dram of Glenlivet, and I served honey and ginseng tea with a side of chocolate bar.  Anthony told us about one of his early Challenges when he went over seven Munros in a day and was caught in a snowstorm that turned his boots into shorty skis, making the descents adventurous.

Mark talked about moving from southern England to Tain, north of Inverness, four years earlier with his wife (who was with him on the Challenge, but had gone to bed). They have 40 acres of land, from which they cut Christmas greens for income. The only thing Mark said he didn’t like about his new home was the period after New Year’s, when the holidays are over and the sunlight starts to fade at 2 in the afternoon. That’s when he and Carol go to Morocco for a month.  Not for warmth, but for light.

There was still a little light left for us, however, when we said goodnight at 10.30 and headed for our tents. 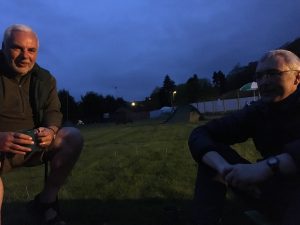