The walk from Nairn to Forres was along an empty beach that turned to grassy mudflats cut through by meandering streams. 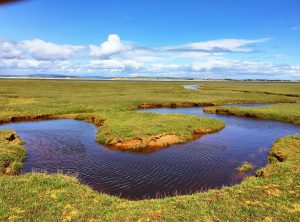 Along the beach in many places were wooden poles in states of decay. Some were mere stubs, a few were 15 feet tall.

I had seen these since Fort George. At first I thought they were poles erected early in World War II to prevent  gliders from landing safely during an invasion. I had read that such poles remained visible, 75 years after they were placed.

It turns out, however, that most of what I saw in rows going out into the firth were remnants of the armature of salmon nets. Vast numbers of Atlantic salmon once came down the coast seeking their natal rivers–the Ness, Findhorn, Spey–that flowed north out of the hills and mountains of the central Highlands. 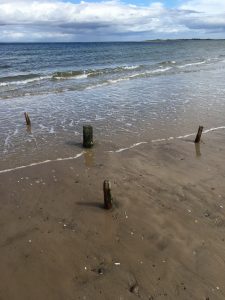 The right to set nets along specified stretches of the coast has been bought up by estates and sporting companies in recent decades, I was told.  Those owners, in turn, have closed the commercial fishery in favor of a sport one.  All that remains of the working salmon industry are the poles.

The beach was lovely.  When a high dune appeared on the water side of the hard-packed marsh, I climbed it and descended to the sand on the other side. 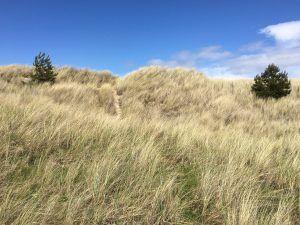 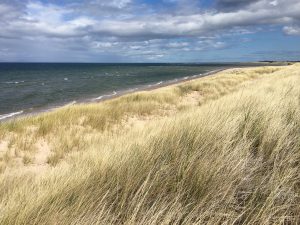 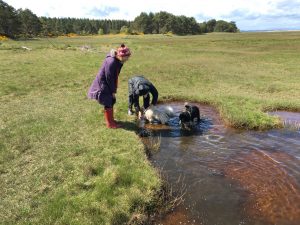 There are always things to see on a beach. I’m happy to report I didn’t pick up a single stone. 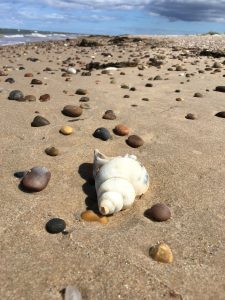 I knew the long dune was a peninsula of high ground on a tidal marsh.  I also knew it would end long before the land did.  The map showed a channel of water through the mud flats. As the tide was more than half-way out, I figured the channel would be crossable, or at least wadeable. (The black target-like icon is my position when I went over the dune). 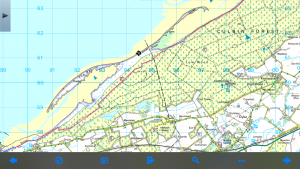 Near the end of the dune I encountered a colony of seals. There were at least a hundred up on the beach. They took to the water in batches and looked at me with great curiosity.  Here are some seal tracks, going to sea 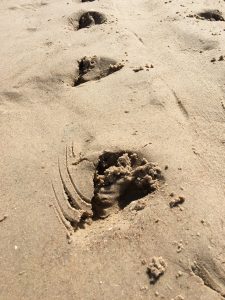 and coming back to the beach. 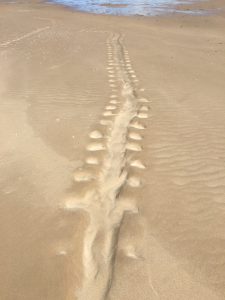 Wanting to save a little time, I didn’t go all the way to the end of the dune. I climbed back up on it, expecting to see mudflats with a channel running through it. Instead, I saw a vast bay, completely uncrossable, despite what the map suggested.

There was only one conclusion: I had to walk all the way back. 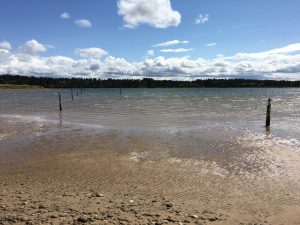 This was discouraging news for someone with a pack on his back. I felt like sitting down and calling an Uber. Or the Coast Guard. Or something.  But there was no choice. I started walking–this time into the wind.

The mudflatted area (now covered in water) also had poles in it. I later found out they, in fact, were the anti-glider defenses. They were so remote that they hadn’t been scavenged for firewood or fence posts after the war, as had happened to those closer to settlements.

There were many tributary channels feeding the head of the bay when I finally reached it. I stepped and jumped over as many as I could, until I finally decided that as an alternative to backtracking even farther I’d start wading.

This was a bigger decision than it might seem because it required taking off the boots and getting them into the pack, which wasn’t easy. However, it felt good to cool off my feet. 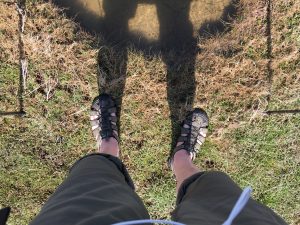 This stretch of coast was bisected by the mouth of the River Findhorn where it met the Moray Firth. I’d planned to walk up to the western edge of the mouth and then turn upriver a mile or two to a bridge.

However, having done a lot of walking I hadn’t planned on, I decided to take a more direct route–namely, on logging roads through a huge forest. It saved me at least a mile.

At one point there was a traffic jam–two logging trucks and one walker, all stopped. 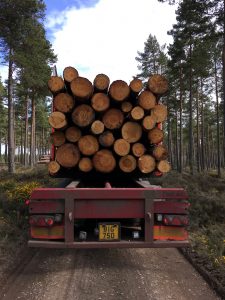 I eventually got out and crossed the River Findhorn at the Broom of Moy, which is quite close to the Snab of Moy, Wester Moy, and Moy Ho. 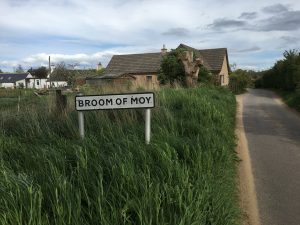 The next day, I walked downstream on the other side of the river, back toward the mouth of the Findhorn.  I eventually got to the village of Findhorn, which lay right across the place where I’d been the day before.

I went to the local museum, where two volunteers–Sue Finnegan and Tim Negus–were most helpful in showing me around and answering lots of questions. Sue was one of many people I’d corresponded with by e-mail while doing research months earlier.  Tim knew a huge amount of local history and archaeology. 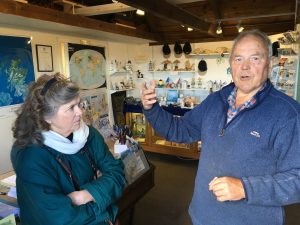 Nearby, Sue’s husband, also named Tim, was manning the Ice House, a historical structure rehabilitated in the early 2000s.

In the old days, at the end of each winter ice would flow down the Findhorn, piling up on the shore. Enterprising people built a stone building, most of it below grade, with a hole in the roof, through which tons of ice was shoveled. The ice lasted nine months. Fishermen caught salmon, packed them in ice in wooden boxes, and shipped them to London. This worked until more than half-way through the 20th century.

Tim took me up on the berm behind the ice house and pointed out another, rounded-top ice house next to it. 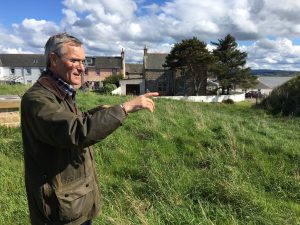 Alas, it was soon time to close up.

He lowered the Scottish flag, and I walked on. 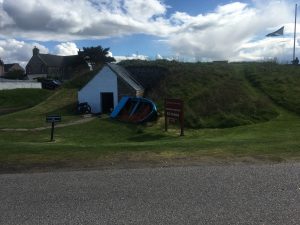