I camped the last night once more on postage stamp of ground where it was hard to tell which end of the tent was higher than the other.  (That’s a problem when it comes time to lie down.) 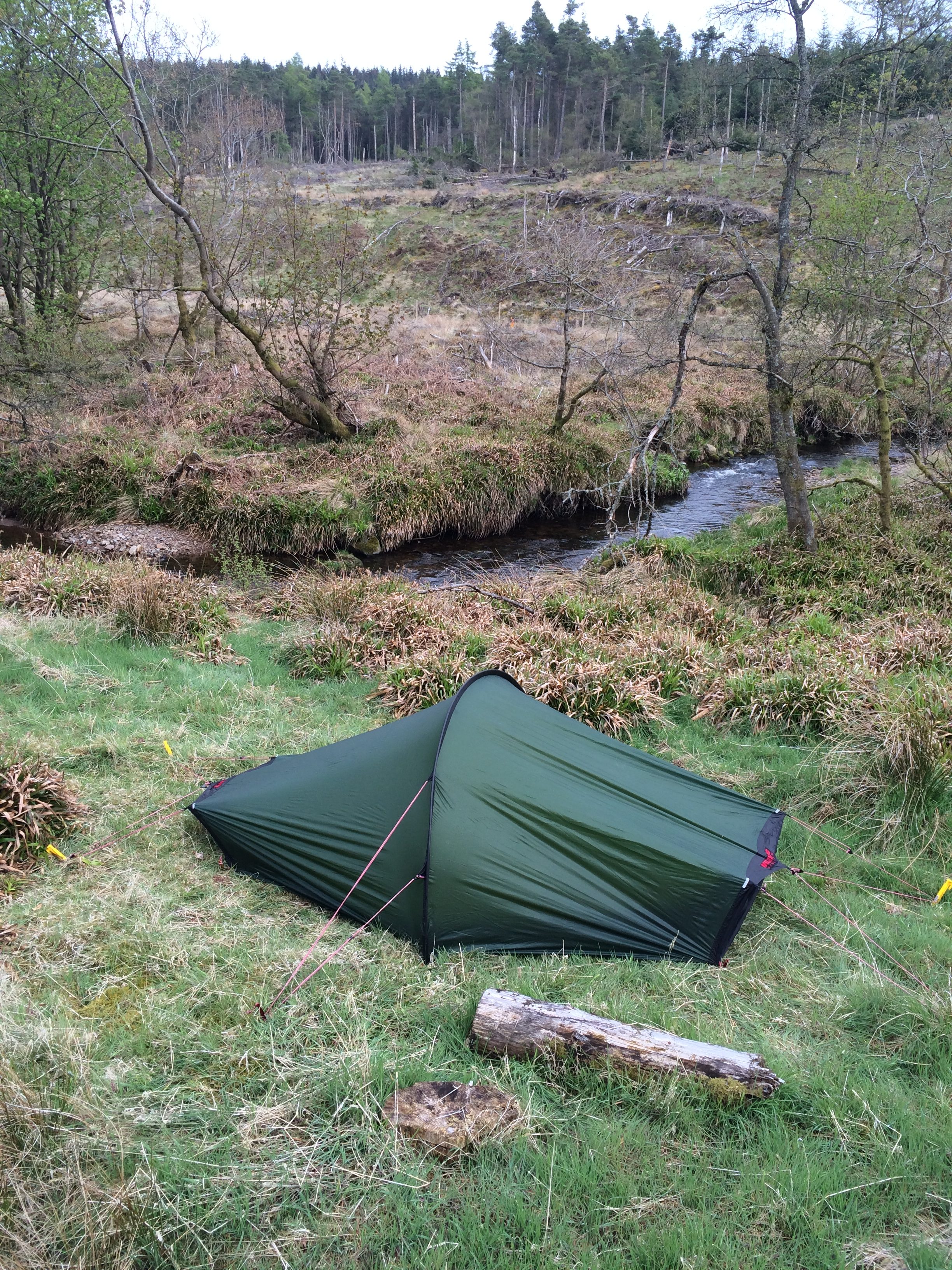 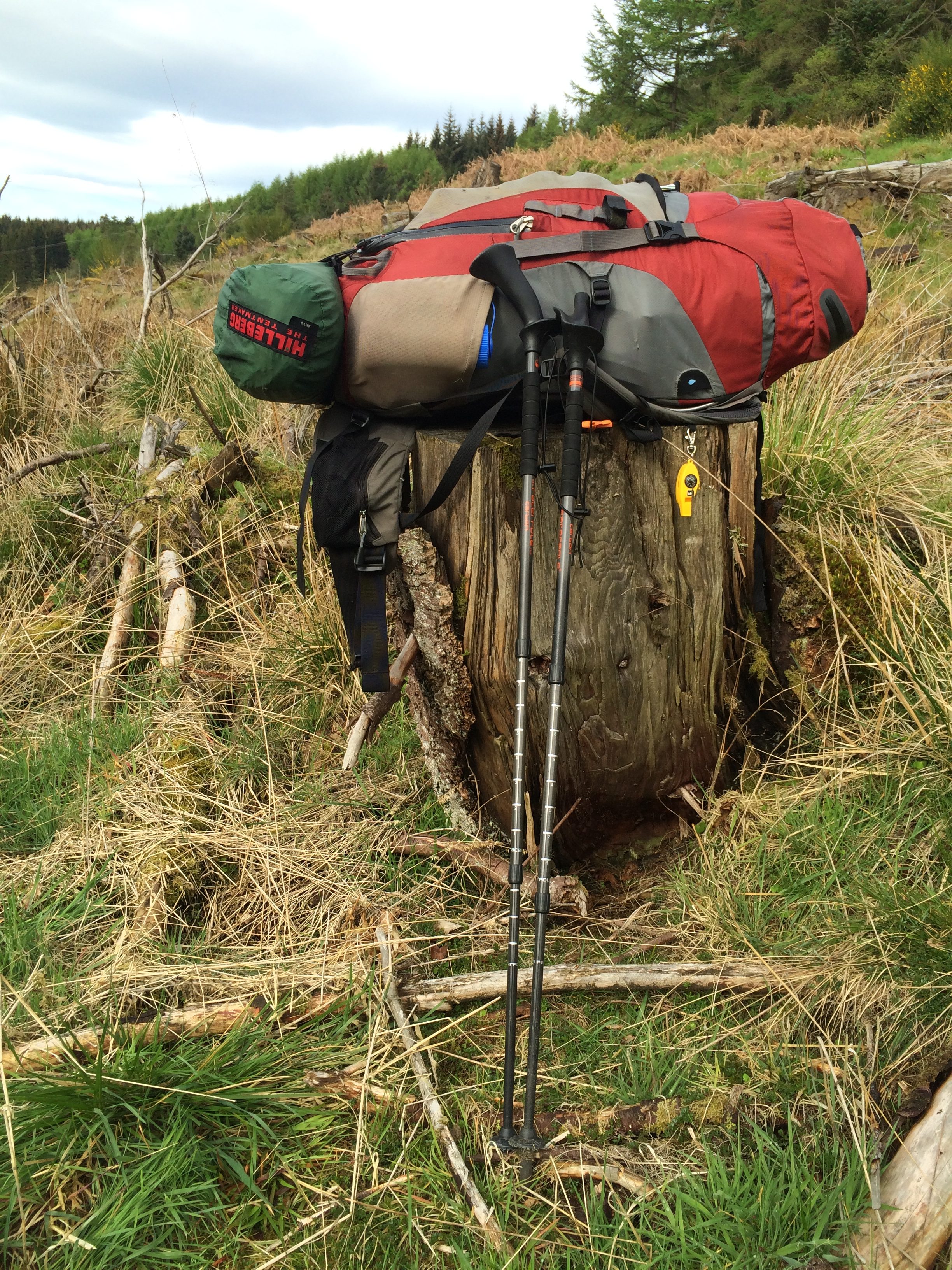 This part of Scotland is bucolic and manicured rather than empty and haunted.  Most of the walking was on roads. There was little traffic. The sun was out and it was beautiful. For the first time, I zipped off the legs of my pants.

I passed a farm in which a bunch of cows were running around in what appeared to be delight.  They got to the end of a pasture and went through a maze gate into the next field, all but one female.  She didn’t like the maze, but also didn’t like being left behind, and bellowed plaintively.  The rest of the group ran to the end of the field.  One of them, a young male, began bellowing himself when they reached the far fence.  He wasn’t happy that his mother was unhappy, so he led the group back.  He’s the dark brown one turning around. 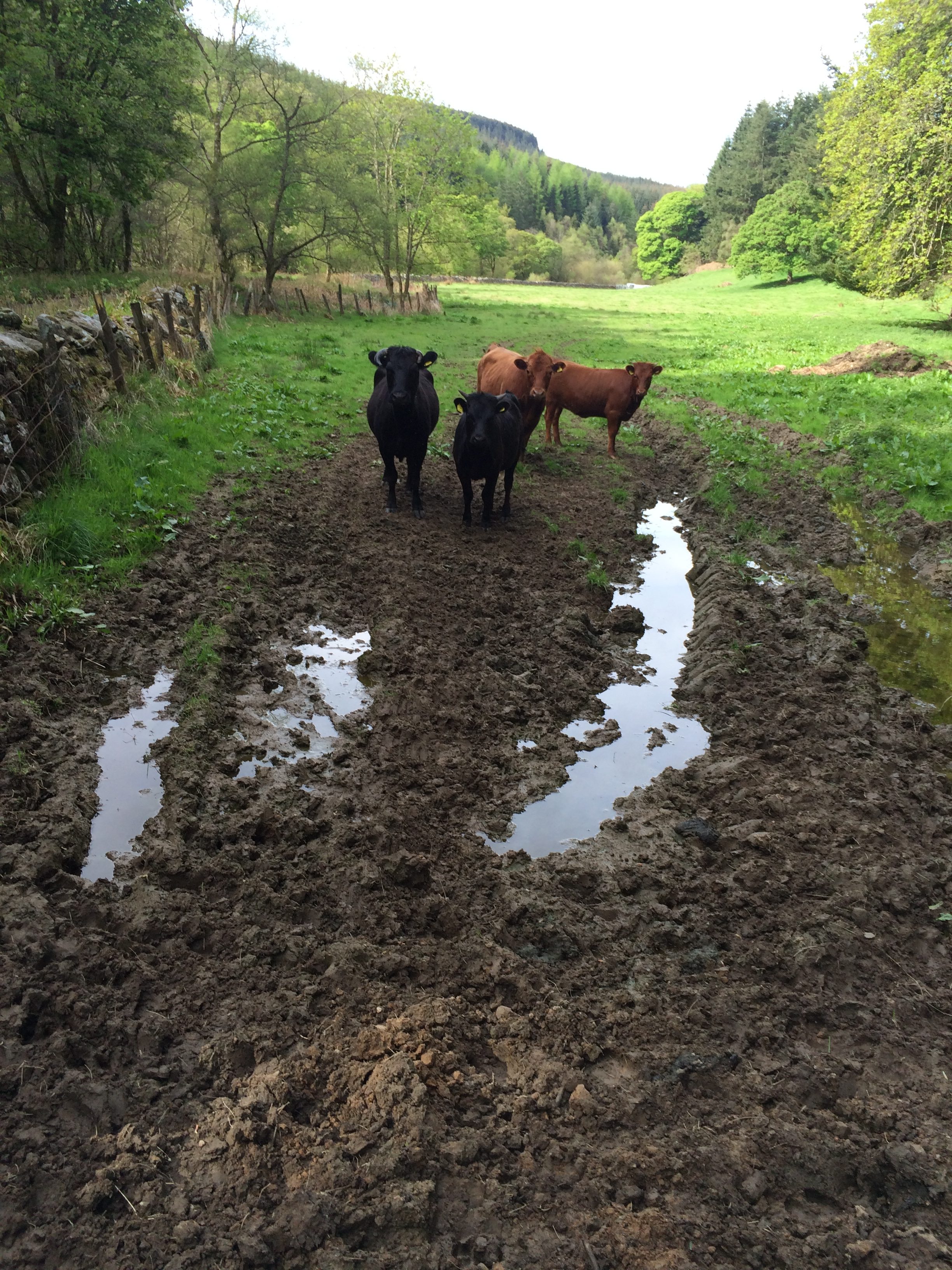 I went by a strange structure, of which I’d seen one other on the walk.  It looked like a coast-watching station, although it wasn’t in view of the water.  No idea what it’s real function is. 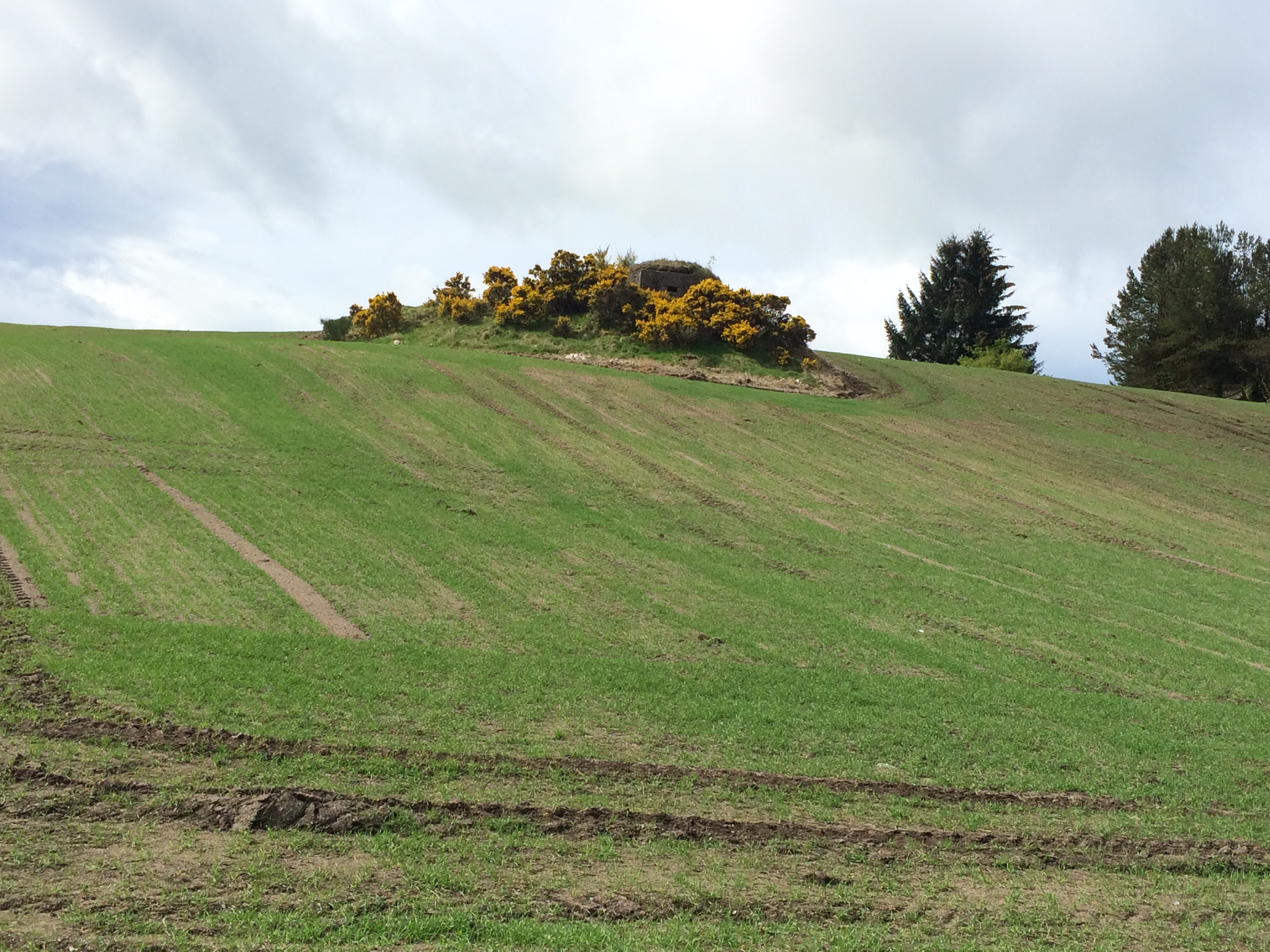 I went over a few hills, but the vertical ascent for the day was only 837 feet, so it wasn’t hard.  Coming down a single-lane road I stopped at a collection of trash cans (“bins”) for farmhouses up a dirt road.  A man drove by in a car and stopped.  I thought for a moment he might object to me offloading a bag of empty freeze-dried food envelopes.  But he wanted to congratulate me on almost making it.  He’d obviously seen other Challengers.  He told me that when I got to Stonehaven, I should go down to the beach and get fish and chips at a place called The Bay.  It was the best in town. 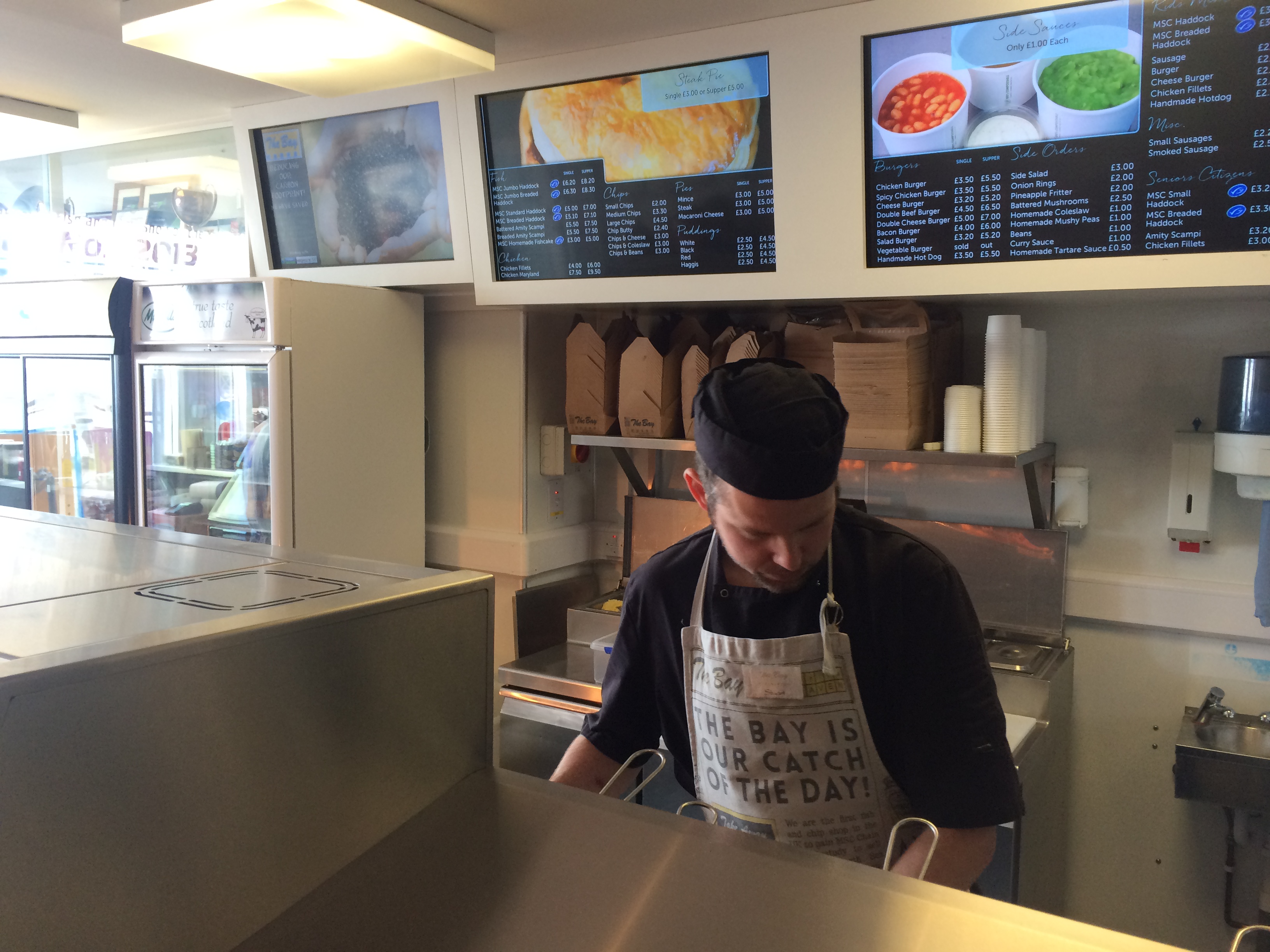 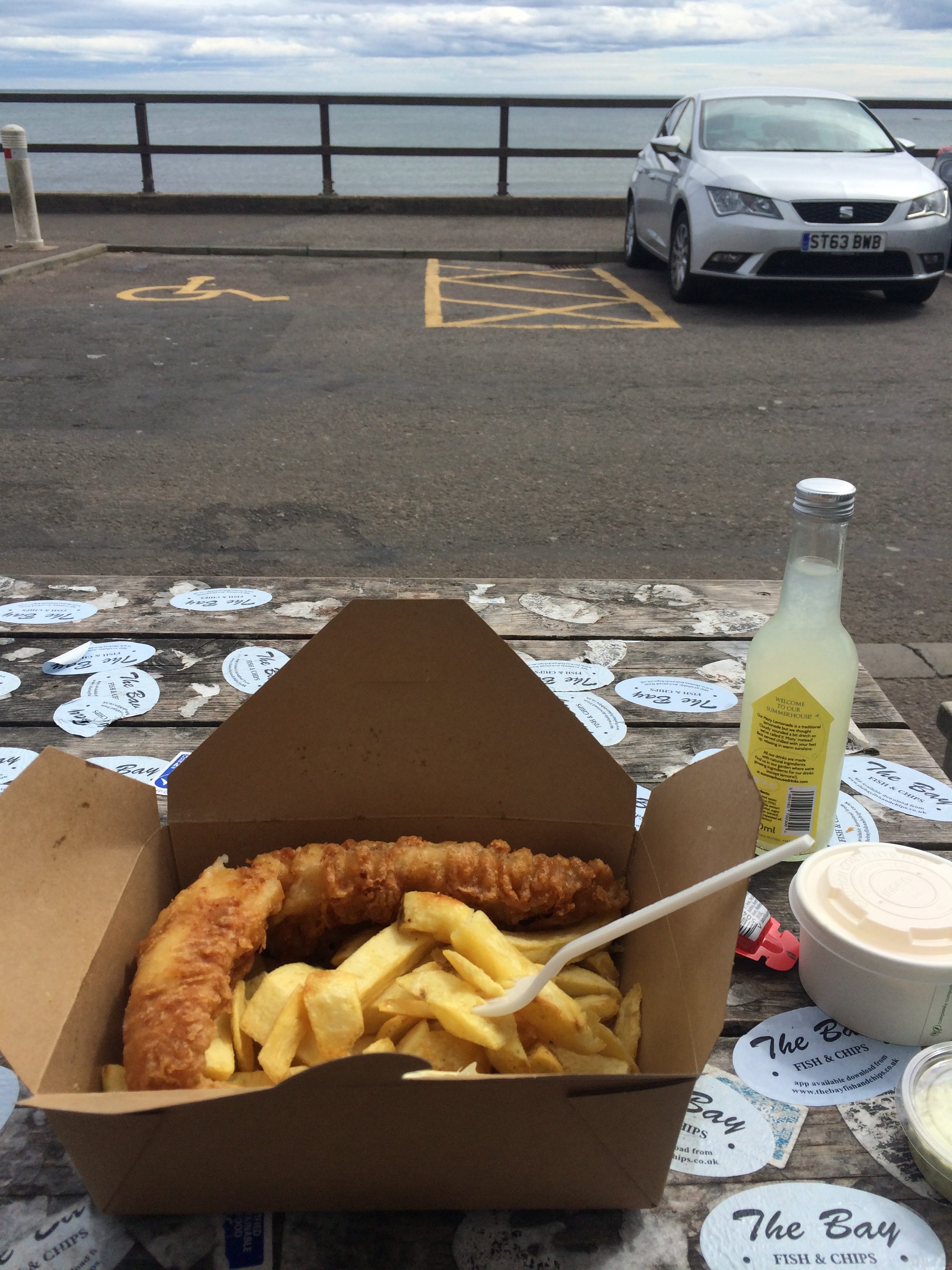 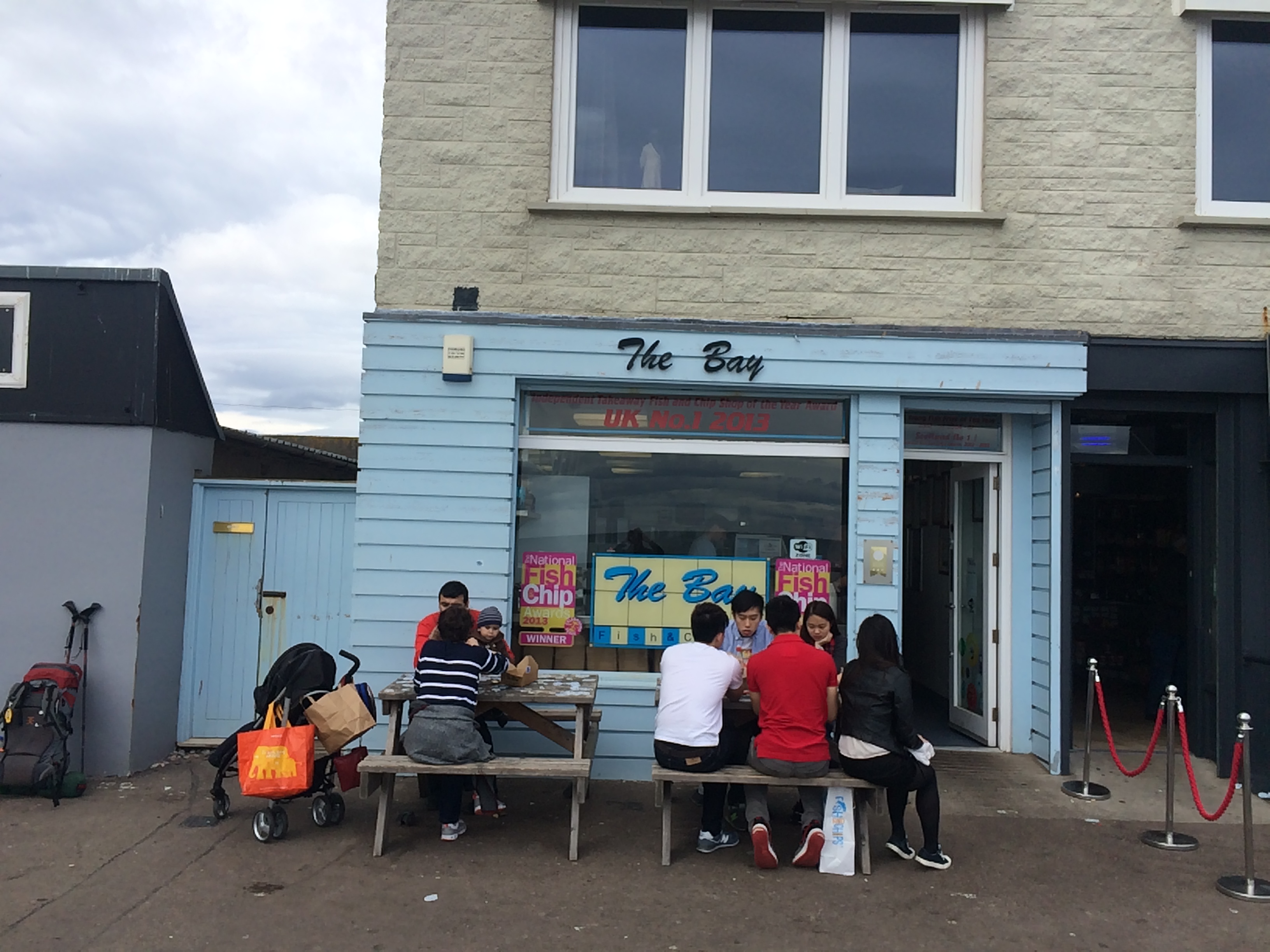 I was originally supposed to end at Dunnottar Castle, a medieval castle 2.5 miles south of Stonehaven.  It’s where the Scottish crown jewels were hidden from Oliver Cromwell’s army, and also where Franco Zeffirelli filmed “Hamlet” in 1990.  But the five-mile roundtrip would have taken too long, so I headed to the train station.

But first I had someone take a picture of me. 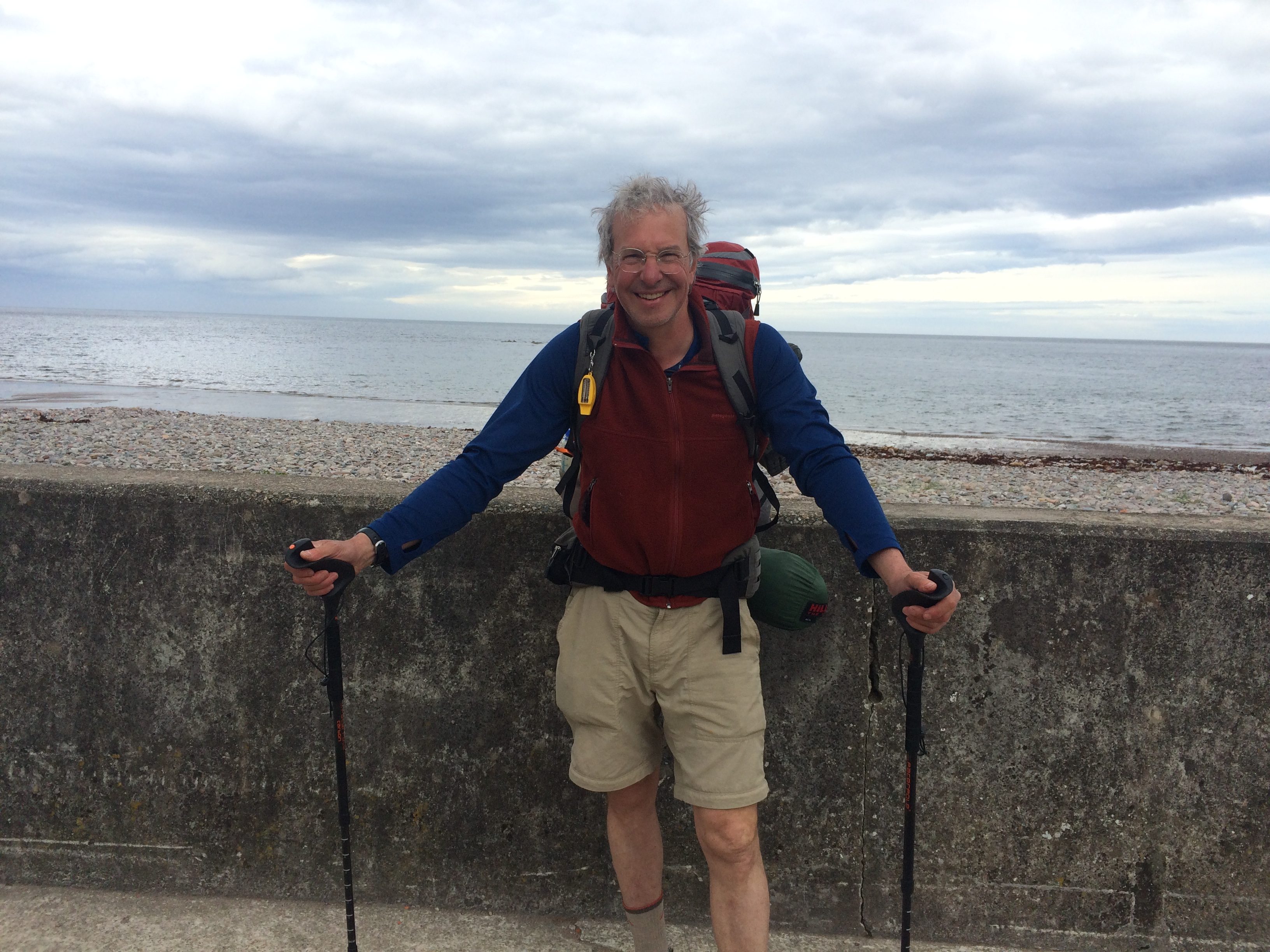 I took the train to Montrose and at 3.45 p.m. on Friday became the next-to-last person to check in after completing the Challenge.  Some things don’t change.

That night at the celebratory dinner at the Park Hotel I sat across from a woman I have to tell you about.

Her name is Heather Werderman.  At 31, she was one of the younger people on the Challenge this year.  She walked at least part of the way with a German man who was with her at dinner. 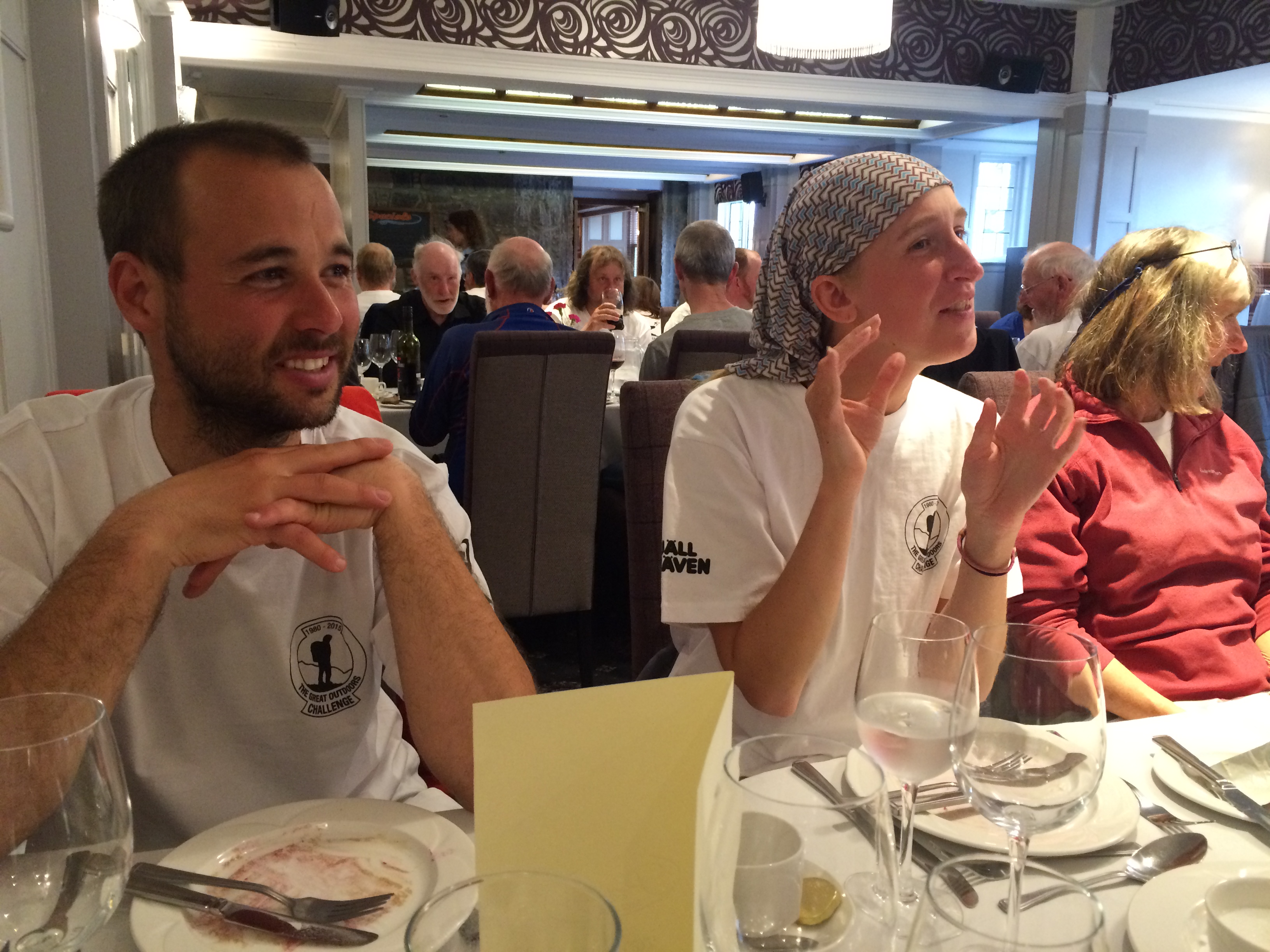 Heather is at the extreme end of the minimalist backpacking movement (although she says there are people to the left of her).  Her pack weighed 9.5 pounds without food or water.  Mine weighed 40.75 pounds with four days of food.  (I didn’t carry water).  How does she do it?

She doesn’t carry a tent.  She has a tarp that weighs 1.3 pounds that she erects as a roof with her trekking poles. Under it she puts a  ground sheet that can be staked with the edges up so that water flows under it.  She has a sleeping bag that weighs just under one pound and comes only to her shoulders.  She wears a down hood  when it’s cold.  She carries no stove, eating cheese, cereal and snack foods.  (Pop Tarts are a favorite). She has a cell phone and carries a rechargeable battery, which is her luxury item.

She goes hungry a lot.  She can never climb into her shelter on a cold and wet day and have a cup of hot tea.  When she finished the Appalachian Trail in 2011 she weighed 103 pounds, down from her base weight of 127 pounds.  She is one of about 300 people who have done the “Triple Crown” of American hiking:  the Appalachian Trail; the Pacific Crest Trail; and the Continental Divide.  The last doesn’t have a trail much of the way, and requires map-and-compass navigation at an average altitude of 11,000 feet.  The distance is 2,700 to 3,000 miles, depending on the route.  It took her five months, some of it hiking in hip-deep snow. 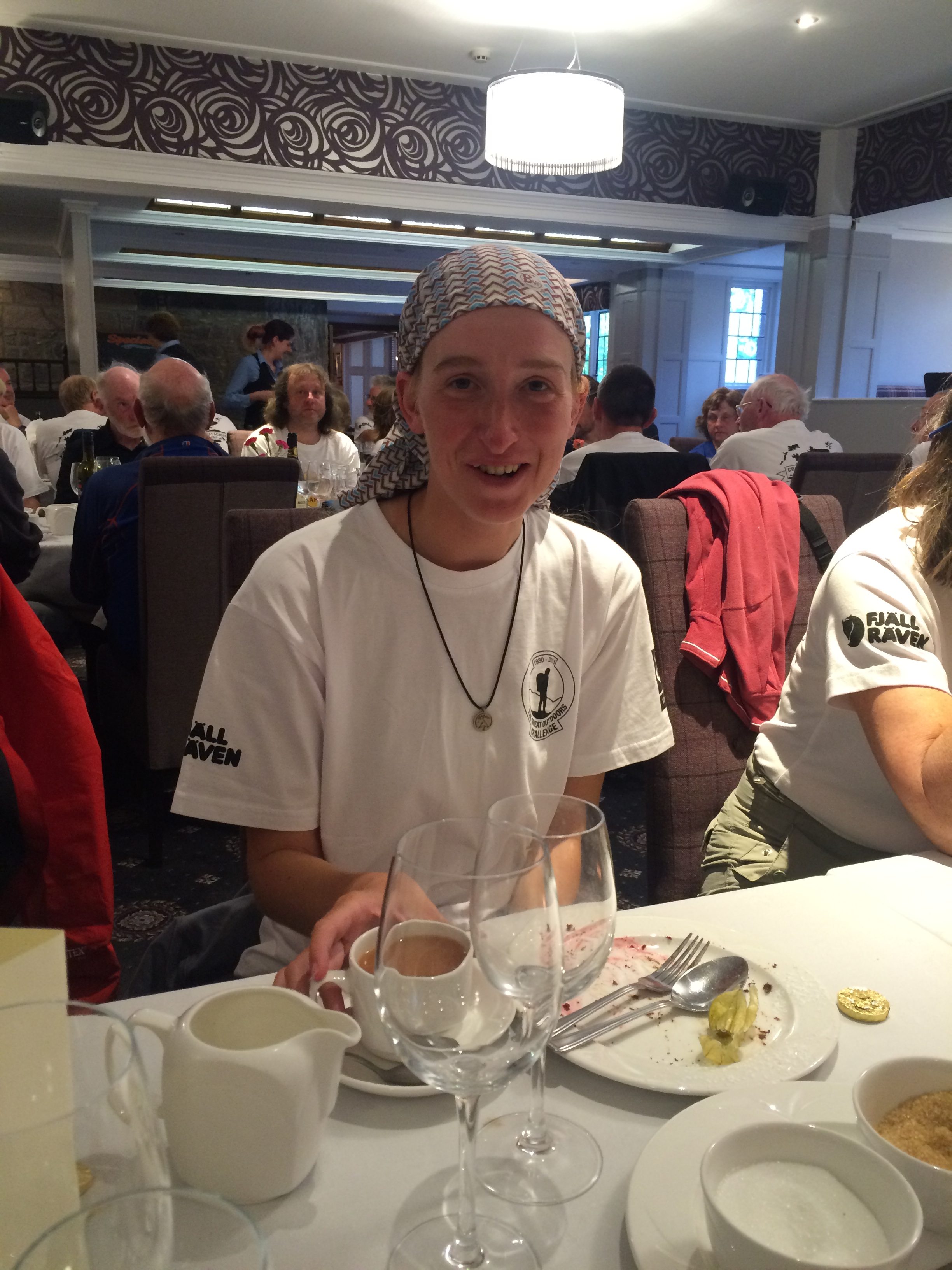 Two people have done all three trails in a single calendar year–a feat that requires walking about 30 miles a day, with only a few days off.

Heather walks April through October.  Before the Challenge, she was hiking in Spain; after it she was going to Sweden.  In the winter she returns to her home in Bristol, Tenn, and gets IT contract jobs, which she bids for on the internet.  The work is not esoteric and the jobs are not high-paid, she said.  But they are enough to underwrite her lifestyle.

“I like to be nomadic.  I like to meet people like that,” she said.  Then she added this:  “I hate walking.  I don’t enjoy it for the physical exertion.  I just like to see something different every day.”

Long-distance hiking for her is a combination of obsession, worship, and mortification of the flesh.  She couldn’t be more different from me.  Yet I recognize some of all three impulses in my choice to do The Great Outdoors Challenge once, and then again.

There will be one or two more posts of a family-historical nature, not about the Challenge.  But they might interest you.

Oh, I almost forgot.  In Stonehaven I did go down to the water and put my feet in the sea. 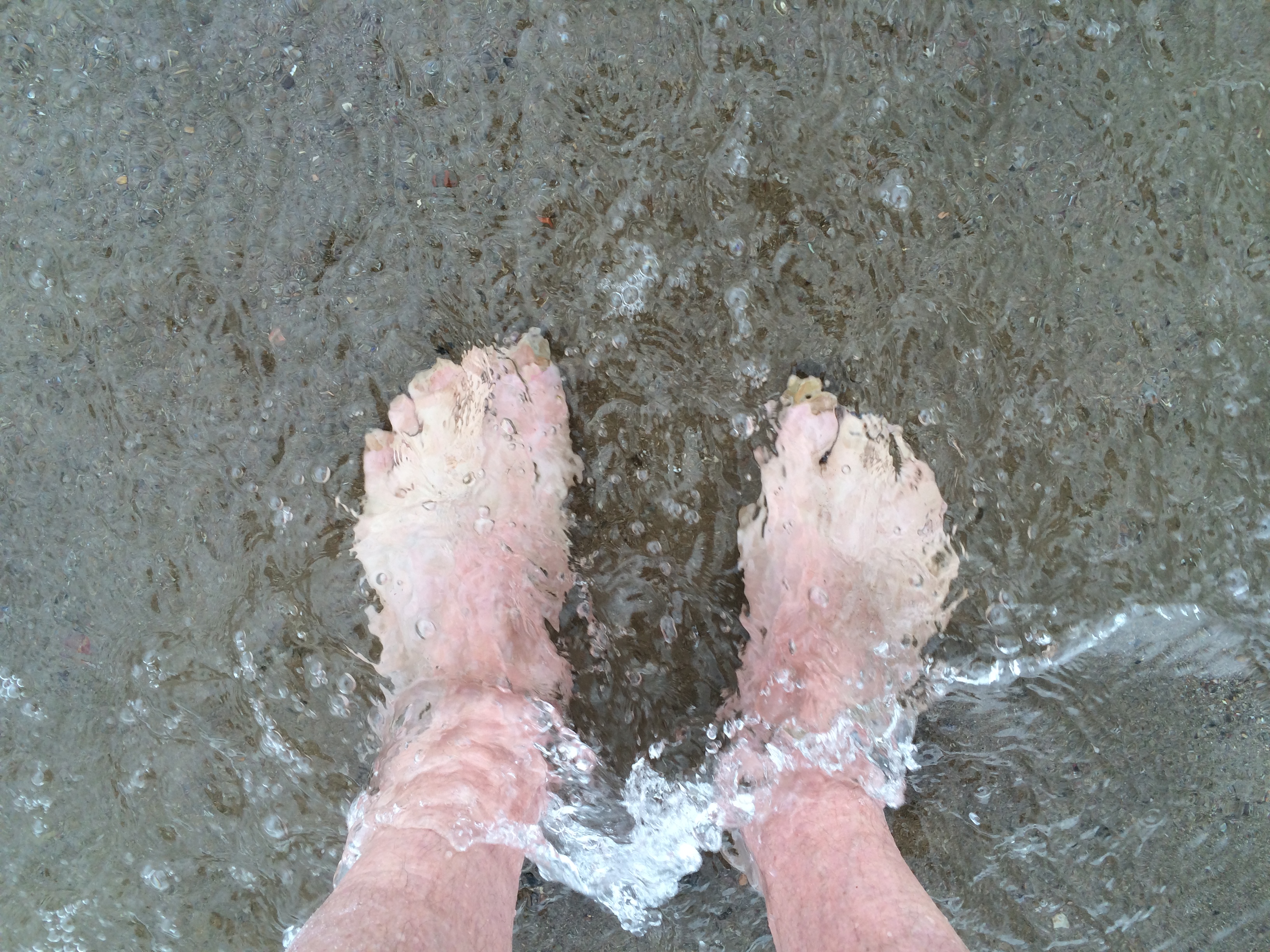