The tragedy at Slapton Sands

This post isn’t about Scotland.  It’s about events I learned of while researching the rehearsals for D-Day carried out on the Moray Firth, whose southern shore I walked on The Great Outdoors Challenge.

The events described aren’t well known to Americans, and were briefly suppressed by the United States Department of War after they happened.   The memorial to the American men who died in Lyme Bay off Slapton Sands on the south coast of England was organized by an Englishman who was a child living nearby when they happened.

The memorial now includes an amphibious tank that foundered during the exercise, and was recovered decades later. 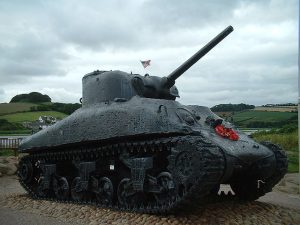 “Exercise Tiger” was one of the last and more elaborate rehearsals for the Normandy invasion.  It involved 30,000 men and was a multi-day event that started on April 27.  Among the participants was Force U, headed by American Rear Admiral Don P. Moon, of the U.S. Navy.  Part of the Western Task Force, his vessels were a mix of American landing craft and British warships.  They were added to the D-Day plans late in the day, and were undertrained for the occasion.

Moon was born in Kokomo, Indiana, in 1894. He graduated from the Naval Academy in 1916. He caught the end of World War I at the dawn of his career.

The commander of the Western Task Force was Rear Admiral Alan G. Kirk.  His authority did not extend to activities off Cherbourg, France, across the English Channel from where his ships would be operating. The Germans had a naval presence there.  Instead, authority to respond to that threat rested with the British naval authorities for the harbor at Portsmouth.  Kirk had requested a change of command structure, as his vessels were the ones at risk, and was turned down by British Admiral Bertram Ramsay.

On the day of the exercise, several vessels were late leaving Portsmouth Harbor.  Moon postponed the amphibious landings an hour, but gave the order to do so just five minutes before the landings were to begin.

The British cruiser shelling the beach, HMS Hawkins, received the message, but many of the landing vessels did not. As a consequence, troops were being discharged at the same time shells were landing. This resulted in friendly-fire casualties; the exact number is disputed. Ramsay said in his diary that the exercise was “a flop,” with “much to criticise.”

Soon after midnight, eight LSTs (landing ship, tank) with thousands of soldiers were offshore, awaiting to play their part in the mock invasion. Two British ships, the Scimitar and the Azalea, were supposed to be protecting them.  However, the Scimitar collided with an American landing craft in Plymouth Harbor just before departure and suffered a two-foot hole in its bow.  The commander-in-chief of Plymouth Harbor ordered the ship into the yards for repair.

Neither he nor the captain of the damaged vessel notified Commander Bernard Skahill, the commodore of the convoy of fully loaded LSTs offshore. Skahill saw the Scimitar going in the wrong direction “but he assumed it was part of the complicated maneuvering necessary to get all the ships out of port and into formation,” according to “Neptune: The Allied Invasion of Europe and the D-Day Landings” (2014) by Craig L. Symonds.

About 10 p.m. that evening, nine German E-boats left Cherbourg. The so-called Schnellboote–fast boats–had 7,500-horsepower Daimler-Benz engines and were faster and longer than PT boats. Each had a 40 mm gun, carried four torpedoes, and were camouflaged to operate at night. Their departure was noted by British radar technicians, but neither Skahill nor the captain of the Azalea were notified until after midnight. But the Plymouth Harbor commander realized the convoy was under protected, and dispatched a destroyer, Saladin, as a relief escort at 1.37 a.m.

Shortly after 1 a.m. the German boats attacked the waiting LSTs.  Many people on board the landing crafts thought it was part of the rehearsal when they saw green tracer rounds.  At 2.07 a.m. a torpedo hit LST 507, knocking out the electricity and starting fires in the gasoline-powered tanks, with small arms ammunition “cooking off.”  The ship had nearly 500 soldiers, and more than 100 crew. The metal pins holding the life rafts to the bulkeads had rusted in place. Men began jumping overboard.

Another LST (531) was hit 11 minutes later, and less than a minute later, a second time. It sank in minutes.

The life vests given the soldiers were like bicycle tubes wrapped around their chests, although most men wore them at their waist so they wouldn’t interfere with their packs. When they triggered the CO2 cartridges, the vests inflated, tipping many wearers over and putting their heads under water. The water was extremely cold, and people who held onto the two-man rafts (20 people on one) eventually lost consciousness from hypothermia.

The first two LSTs sank. A third LST was hit in the crew quarters and galley after the skipper made an avoidance maneuver after seeing the torpedo, which otherwise would have hit it amidships.

Skahill, the commander of the convoy, ordered the remaining vessels to head to shore. But the skipper of the vessel Skahill was riding on objected.  “In an act of near mutiny, he got on the 1-MC loudspeaker and explained the situation to the men on board. Their shipmates and fellow soldiers were dying out there, he announced.  Who wanted to go back to get them? A rousing cheer went up, and Skahill capitulated. The [vessel] returned to the scene,” Symonds wrote.

There is no better example of the Navy principle that a ship’s captain is the person responsible for what his vessel does, even when the commander of the fleet of which it is a member is aboard the vessel, too.

At that point, however, only a few people were still alive.  A few were rescued. The destroyer dispatched from Plymouth, Saladin, and the LST began retrieving bodies, but stopped when orders from shore told them to return to shore.

Over the next few days the bodies were collected. Among the dead were slightly more than a dozen people who knew the exact details of Operation Overlord, including when and where it was to occur. There was much anxiety until all those bodies were recovered. D-Day planners worried that someone with the knowledge might have been captured alive by the Germans and could reveal the plans under interrogation or torture.

The official Navy death toll was 639 people–198 sailors and 441 soldiers. The memorial at Slapton Sands lists the death count as 739. There are other estimates, some higher and including large numbers of friendly fire casualties on shore.

What is certain is that the number of American servicemen who died at Slapton Sands was more than the number who died on Utah Beach–one of two landing spots for American forces–five weeks later.

The debacle was kept secret–probably on Eisenhower’s orders–so it wouldn’t undermine morale and support for the invasion. Survivors were kept in hospitals, isolated from other members of the invasion force. Families of the dead were not notified until after D-Day, and their loved ones were officially listed as among the dead from D-Day.

The tragedy led to a coordination of radio communication between the British and American forces, and an improvement in the life jackets.

“Another failure,” according to one author, “was that almost everyone involved with Exercise Tiger had conceived of it as another rehearsal and had behaved accordingly. There had been so many practice landings that the sailors and soldiers–even the officers–had trouble making the mental adjustment to actual combat . . . [M]any clung to the idea that this was a rehearsal right up to the moment they found themselves in the water.”

Admiral Moon had no role in the events that occurred that night. Nevertheless, in Navy tradition, he was deemed responsible because he was commanding officer of the flotilla that had been attacked.

The day after the debacle he was brought before the chief of the Western Task Force, of which his vessels were a part.  Rear Admiral Arthur Struble looked out a window and saw a British submarine sail by with a broom tied to its periscope signifying a “clean sweep.” He said: “Well, I see somebody did his duty.”

One of Moon’s staff officers, Captain John Moreno, recalled: “that Struble thereupon turned on Moon with ‘the coldest glance I’ve ever seen . . . [and] brutally snarled, “All right, Moon, tell me what happened” ,’ ” according to historian Joseph Balkoski.

Moon’s forces performed acceptably on D-Day.  By early August, however, Moon was called to command the invasion force for an attack on southern France called Operation Dragoon. He told his superiors that he and his men were unprepared, and requested a delay.  He was turned down.

Moon had worked 15-hour days, seven days a week, for months. He suffered from such obvious exhaustion that he had been referred to both the medical officer on his ship and the Eighth Fleet medical officer. The losses at Slapton Sands weighed heavily on him.

On the morning of August 5, 1944, in his cabin, he wrote a message that said in part: “With the mind stalled & crazy . . . things once easy are not in sight. Command is wrong under such a condition . . . Overwork thru the years–I have given the Navy everything I had–too much–it has broken me. My country, what am I doing to you. My wife & dear children . . . I am sick, so sick.”

He wrapped his .45 automatic in a towel, put it to his temple and pulled the trigger. 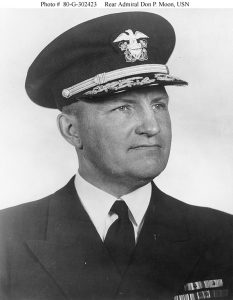