Well, that began with a bang. (And I’m sure I’ll be whimpering in the morning.)

The hospitable couple who ran the B&B where I stayed (the Cromasaig) kindly delivered me to Torridon 10 miles away, where the walk officially began. I first had an errand to attend to, so I walked the half mile from the hostel where I had to sign out to the village. And back, of course.  So I guess that makes 14 miles today.

On the way I passed the medical clinic run by the National Health Service.  The staff is two women physicians. 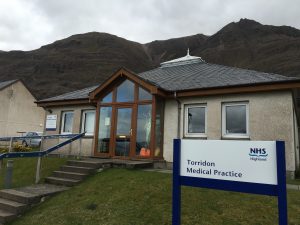 Not far beyond was the memorial to the dead of the Great War, which had names on four sides and just enough room to include some of the dead from World War II. 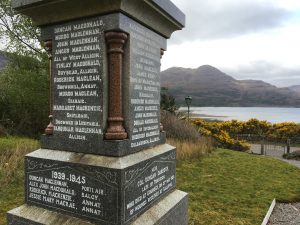 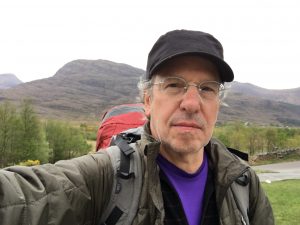 The first mile or so was on road, to a hamlet called Annat. I walked by the “new cemetery,”  which I wager has four or five times the number of living souls as Annat does today. 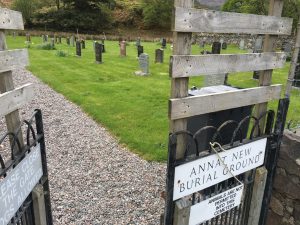 A name caught my eye. (There’ll be a little more about that in a future post.) 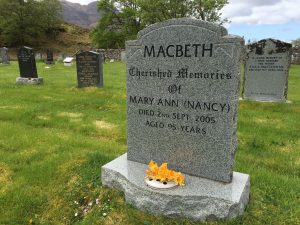 And then it was off the road and into the hills. 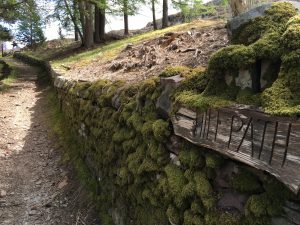 I can’t do justice to the landscape in words, so I’ll use mostly pictures.   Here’s a last look down into Annat. 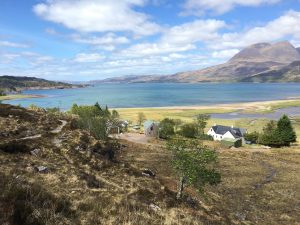 As you can see, it’s land in a spare palette, which personally appeals and is conducive to ruminative walking, and on a good day, meditative walking as well. 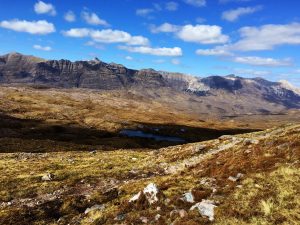 I thought for a while I’d see nobody. But I was wrong. Soon enough, I met Vanessa and David, and their 19-month-old border collie, Shep. Vanessa is doing the walk; her husband is accompanying her for the first two days. Dogs aren’t allowed on the Challenge, but Vanessa got permission to have Shep come along for these first days in a sheep-free zone. The couple has sheep and Shep is a working dog, which I guess means he’s on holiday.

He’s a gorgeous dog, too fast for an acceptable picture.  He’d run a quarter mile ahead just to sniff me once ran more and get some effusive human nonsense. He’s sleeping well tonight.

I ran into three guys doing a different northern route, who headed off after a brief chat. 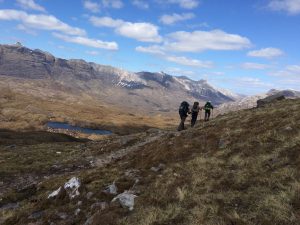 I wasn’t planning on having lunch, as I’d gotten a late start and had a three-egg breakfast under my belt. But sometime between 3 and 4 in the afternoon I decided I was wrong. I shucked the pack, took off my boots and had oatcakes and Gruyere, with date-heavy gorp and water after. It was the right decision.

Soon enough I was joined by Andrew, who remembered me from two years ago. (He looked familiar, too.) 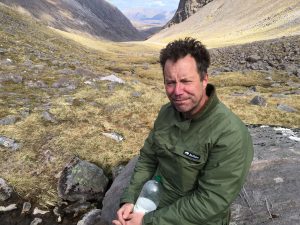 “We met outside Newtonmore when you were sitting disconsolately at the side of the road,” he recalled. “There was a sign ahead with three slashes and you asked, ‘Does that mean three miles to Newtonmore?’ I said, ‘No, it’s three hundred yards.’ I made your day.”

My recollection is that we also walked by the remains of a medieval castle, with the only part remaining the tower-like keep. He said this was true.

He gave me a brief history of the creation of the list of Munros, the hills in Scotland over 3,000 feet. I thought height was the only requirement for listing, but it turns out the creator, Hugh Munro, had a character requirement, as well. (Munro was a Victorian.) There were 277 when he made the list.  There are now 282. Or thereabouts.

Andrew had climbed a few Munros the previous two days, and was debating whether to go up a steep scree in front of us hill to bag another.  From a neighboring summit he’d spied a patch of grass near the top where he thought he could pitch a tent out of the wind.

I did not have a similar debate. I was going down after several climbs. 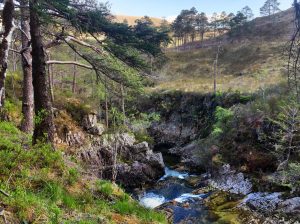 Descending is easier than ascending, but it nevertheless requires considerable muscle power. I was feeling a bit wobblish from jet lag and general exertion. The trail was made of stones and boulders, and in places carpeted with what looked like rejected product from a ball bearing factory.

I took a spill in one such place, coming down hard on my right thenar eminence. Without trekking poles it would have been as lot uglier.

We’re at the latitude of southern Alaska. The sun isn’t setting until 9.15 p.m. (and of course each day later). 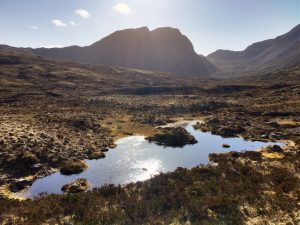 It was after 8 when I finished the last descent onto a road beside a railroad track. The plan was to camp near a hostel about two miles ahead. As I walked, it occurred to me there might be room in the hostel. Which there was, just barely.

It was nice to not have to set up a tent, get water and cook dinner in the fading light. I was quite sore and a bed–even a top bunk–would be nice. Plus there was a shower.

This change of plans didn’t cause me much guilt. But it’s not like the old days, I’d been told.

Tom Forrest, the husband of the couple who ran the bed and breakfast where I spent the previous night, was one of the original Challengers. In fact, he did it back when it was called The Ultimate Challenge, in the early 1980s.

Back then, people were required to walk 250 miles and choose either a route on the tops or in the glens. If you chose the former you had to go over at least 12 Munros. Only two nights indoors were allowed. You had to carry all your food or cache it in advance. Tom said he once did it in five days, which required 50-mile, 16-hour days.

Tom is a tough guy. He spent 23 years in the equivalent of the Special Forces in the British Army. He was one of the first people to hit the ground in the Falklands War, doing a HALO (high-altitude, low-oxygen) jump from 34,000 feet. He retired from the military after being wounded by an IRA bomb. 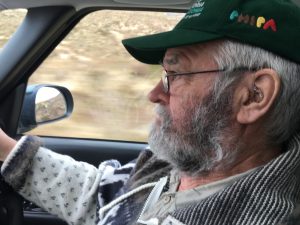 He thinks the Challenge has gone soft. Too many people, too much partying, not enough time on hard ground.

“It’s lost its character,” he said. “I think they ought to bin it”–trash it–“and start over.”

I was born after the day when people walked five miles to school and back, uphill each way. The Challenge is good enough, and hard enough, for me just as it is.