The walk from Edzell to St. Cyrus is all on roads, although with both corner-cutting and intentional indirection a person can make at least some of the way through farm roads.

I spent the morning updating this and headed out about 3 p.m. as it was starting to drizzle.  Normally such a late start would fill a person with anxiety, but here in May there’s still nearly a workday’s worth of daylight left in mid-afternoon.

This is a high-latitude place, the equivalent of Sitka, Alaska.  In a month, I’m told, it won’t get fully dark, although the sun will disappear.  My headlamp broke halfway through the walk and I didn’t miss it at all.  Here’s a picture I took at 10.08 p.m. a few days ago. 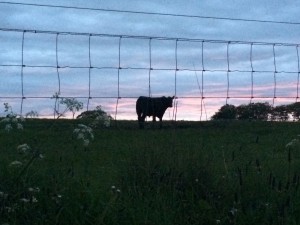 I had lunch just before I left Edzell in a tea shop that also sold plants and local crafts, run by the woman whose B&B I spent the night in.  Sitting at a table nearby were an older couple and young woman, all in hiking gear.

I left and headed out of town in what was if not the wrong direction at least not the right one.  I was set right by a couple who gave elaborate directions about how to find a foot bridge over the River North Esk.  I took them and on the far side of the bridge ran into the man and the young woman consulting a map.  As I had surmised, they were Challengers.  I asked them where their other companion was.

“Oh, Maggie’s not walking.  She’s following us in the car with the dogs.”

I walked on, not wanting to disturb their consultation further.  I walked on back roads, on a dirt road that took one right through the middle of a farm’s cluster of modern cattle barns, down a paved road.  Once or twice I looked back and saw the two of them in the distance.

So I was a bit surprised when I came off a farm road and prepared to cross a divided highway–a “dual carriageway”–and saw the two of them standing there waiting to cross too.

They turned out to be Alan Wormald, 63, and his daughter, Lucy Wormald, 22, the youngest woman on the Challenge.  Soon after we crossed the highway and got back on a country road, Lucy got a call on her cell phone and fell back.  Alan and I walked along and talked.

They are from Inverness, several hours north.  Alan and his wife, Maggie, are originally from England but have lived in Scotland for decades.  They are original back-to-the-landers.  They did what I and some of my friends fantasized about in the years immediately after college but none of us did.

They live in a stone crofter’s house that Alan has slowly improved over a quarter century.  It has walls a foot thick and used to be as cold as a refrigerator.  He has sheathed and insulated the inside.  They have two children–Lucy and her brother– and Alan divided one bedroom to give them each their own, although they were barely larger than closets.  He’d recently taken the partition down.  They have a one-acre garden.  The house is up a drive accessible only by Land Rover.

Alan has had many jobs.  He’s a tree surgeon, a woodcutter, a teacher of outdoor skills.  About 15 years ago he spent half a year building hiking trails for the government.  This required splitting large rocks with a sledge hammer (“like the ones they have prisoners use,” he said) and muscling the shaped pieces into dikes and steps on the path.  The crews worked every day and he got in the best shape of his life, even though he was no longer young.

“I went to the sports day at my son’s school,” he said.  “Even the teachers run races.  I wanted to show them what I could do.  I ran in long trousers and wore a hat.  I beat them all.  And the hat didn’t even fall off.”

He was also quite a gear-head, extolling the statistics of his tiny MSR stove (“It’s an American company, you know”) and offering thoughts on the profusion of new tent designs. Also on the over-promise of wind power and the virtues of cider vinegar for longevity.

Lucy was just about to finish college in Edinburgh, where she is a music major.  She is also the president of the hillwalking club.  At least part of the phone conversation involved plans to go north for four days of Munro and Corbett climbing with the club in the days immediately following the Challenge.

Alan and Lucy had started at Tarfside that morning–the place I’d come from the day before.  They were also headed to St. Cyrus.  If they made it (and they did) it would be 39 kilometers–24 miles–in one day.  Surprisingly, this is the first Challenge for both of them.

At some point (I forget exactly where) Maggie appeared.  She had driven ahead, parked the car with their two dogs in it, and walked back to meet them.  She is clearly an outdoorswoman herself.  She asked about the crossing and I mentioned, among other things, that I had met Jim Taylor, the 91-year-old man who was doing it for the 20th time.

“I had a great time talking to him about his life, working on farms before the war,” I said.

“Did he tell you the story about having to go to the doctor to get a new shirt when he was in the forces?” Alan asked.

That’s the best story on the 24-minute video I made of Jim Taylor.  I’d repeated it to many people along the way.  Someone had told Alan about it the day before; he wasn’t sure who.  I’m curious to know whether this was a retelling of the version I’d heard, or whether Jim had told the story to many people over the years and it’s simply part of the lore about him.

By late afternoon they all wanted a break, including the dogs, so they went into a village called Marykirk to get something to eat.  They hadn’t completely decided whether to finish that day or knock off the last five miles in the morning.

We parted ways.  I wasn’t going to stop that close. 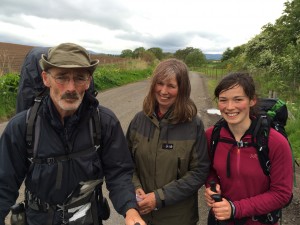