On one of the early days I walked about four hours through a forest and down a glen until I came to a bothy.

Bothies are buildings open for public use, the public in this case being walkers quite far from civilization.  For that reason, an expected level of respect and responsibility generally obtains.  They aren’t trashed and covered with graffiti.  In many cases, they have a small supply of emergency provisions–a few tins of food, the remains of propane fuel bottle, candles, occasionally even an unfinished bottle of whisky.

They are almost always owned by the “estate” on which they lie, which is to say to owners of vast tracts of land in the Highlands.  Estates all have names (often ancient ones) and are the size of townships or counties.  The owners are individuals, or families.  Rich, of course, and sometimes foreign.

This is Luipmaldrig bothy, as seen from the stream (“burn” over here) I crossed to get to it. 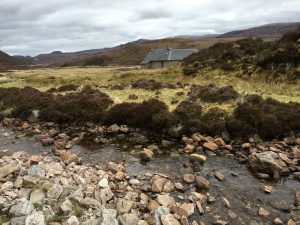 Bothies are usually former farmhouses or tenant cottages.  They vary in size and architectural sophistication.  This was one of the bigger ones I’d seen.

It was well kept, with a bright and recent paint job. 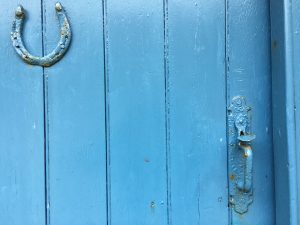 The front door led to a stairway, and to the right to a door to a room with two wooden storage bins (one assuredly for wood and peat).  There was the remains of a cast iron stove in the fireplace. 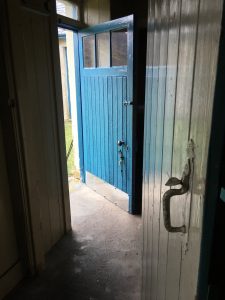 Finishing a tea break were Jean and Tony Pitchforth, an English couple who’d done the Challenge numerous times. Tony, a retired physician, at 75 was a year younger than the most senior walker.  They were an example of the remarkable number of fit and adventurous older people who year after year come out for this event.

We talked a while and shared some gorp before they moved on.  I explored the house. Upstairs at the head of the stairs was a mounted deer trophy with a single strand of spiderweb between two prongs of its antlers. 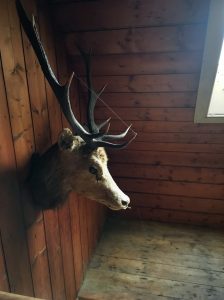 I soon left, too, and headed across a bridge onto the south side off the River Orrin.  It turned into the Orrin Reservoir, which was river-like much of its way because there hadn’t been much rain recently. . 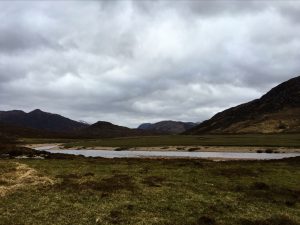 There was no path on the south side of the reservoir.  I was apprehensive about this when I drew up my route.  The estimable Roger Hoyle, who provided this route–he’s the father of a Times of London correspondent, whom I met on a visit to Moscow three years ago–told me that a person’s map-and-compass skills had to be “up to scratch” to take this unmarked route. (Mine are adequate, nothing more).

He had walked it several Challenges ago when it had been raining for three days.  The sky was so foggy he couldn’t see the reservoir as he walked.   To make matters worse, the streams coming out of the hills from the south–water flows north in this region of Scotland–were “in spate,” which is to say, in flood.  As a consequence, Roger and his companion had to walk upstream (and uphill) every time they came to one in order to find a safe place safe to cross.  It was a memorably exhausting day, he recalled.

It was a memorably exhausting day for me, too.   And I was walking under relatively clear skies with the streams low.

I passed Jean and Tony pitching their tent, briefly considered stopping there, but moved on.

There were things to see along the way.  Because the streams were low, what they’d excavated by their flow was visible.  Ancient parts of trees, buried in the peat for centuries, appeared like the bleached bones of extinct ruminants. 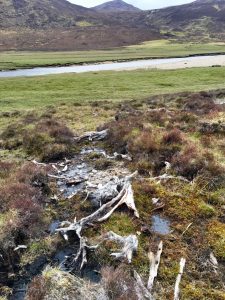 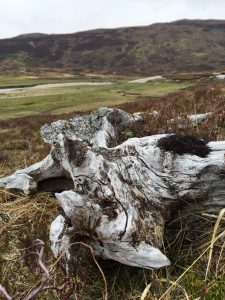 Walking over heather, grass, and sphagnum moss for hours is exhausting.  It’s like walking on ground covered with sprung mattresses. (Not, of course, that I’ve ever done that).

The sun was going down, and I was still going up and down, when I decided I didn’t have to get as far as I’d planned that day. So I looked for a place to stop.

Coming down a steep slope I descried a stream.  On the near side we’re a few small terraces of grass.  On the far side was nothing but steep heather.  I stopped and chose one of the terraces.

This violated one of the rules of Scottish hill-walking, which is that if you camp beside a stream, camp on the far side.  That’s so if it rains in the night and the water rises, you’re already on the side you want to be on when you take off the next day.

I, however, had no choice.  In fact, I barely had room for the tent.  This was the tame equivalent of the cliff-hanging “campsites” that rock climbers sometimes must create. 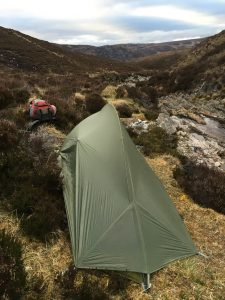 It was hard to tell which end of the tent was higher than the other.  I actually changed my mind and switched in the middle of the night.  You can see the interior lines aren’t plumb. 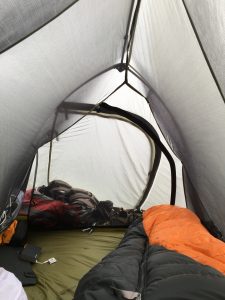 It didn’t rain in the night.  I crossed the stream easily.  And I walked on. 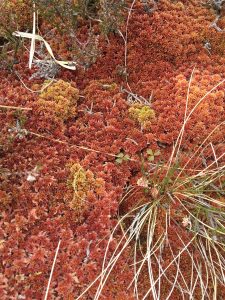 I passed another bothy off the trail and saw from a distance a figure in black outside.  I didn’t investigate and walked on.  Soon enough, “Butch Cassidy”-like, the person was gaining on me.

I got to a place where the path ended and trackless navigation was necessary, and he caught me.

His name was Anthony Driscoll (pronounced “Antony”), and he was a semi-ultralight serious walker.  He works in the quality-assurance department of Bentley Motors’s parts division.  Bentley doesn’t make its own parts; it has 800 suppliers, and assembles the cars.

Anthony has a wife and a 12-year-old daughter, and he does the Challenge with their indulgence.  He moves fast.  Several years ago, he started one three days after everyone else.  It never takes him two weeks.  On this day, he wanted company.  So we conferred on compass bearings and headed off over the heather.

He was a good companion.  He even volunteered to take a break at one point.  He smoked a small cigar and shared his water, as I had none. 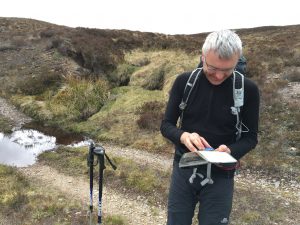 I was heading to a bed-and-breakfast in the town of Beauly.  Anthony, harder core, was walking just south of Beauly to a camp spot.

Soon we approached the village.  This Highland cow was waiting to welcome us. 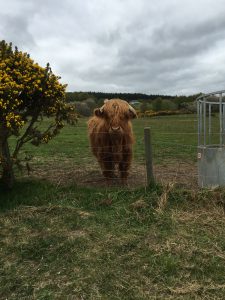 Soon we parted ways.  But it wasn’t the last I saw of him.