There’s no getting around it.  Sometimes one person’s misfortune can produce another person’s vacation.  (I won’t say good fortune.)  That’s what happened to me.

Bob M, my cousin-by-marriage–it’s a relationship of love, not blood–suffered a partial retinal detachment about five weeks ago.  This frightening event forced him and his wife to cancel their plan to go on a guided kayak tour of the Ligurian Coast and Sardinia, in Italy.  Bob’s treatment prohibited air travel, and his arc of recovery after surgery was uncertain.

He can now fly safely, and I am happy to report his eyesight is improving and the treatment appears successful.  Nevertheless, he and his wife decided a while ago to cancel the trip.  They made the decision too late to get a refund.  They looked around for a couple to take their place.  Not finding one, they offered a place to me.  This was a generous and entirely unexpected gift, for which I am very grateful.  So I’m taking in the sights for three.

Getting here, however, proved more difficult than expected, which given my travel karma should not have been unexpected.

I took the light rail from the bottom of the hill to Penn Station, where I planned to take a train to the airport.  The next one leaving was a pricy Acela, so I took a cab instead.  The entrance to the airport from the Baltimore-Washington Parkway was blocked by a police car.  The cab driver exited onto Interstate 95 North, drove almost back to the city before using an “Official Use Only” crossover to head south again.  We got to the airport by a different approach; it was $15 more than the Acela fare.

The route was Baltimore-Atlanta-Paris-Genoa.  The first leg was uneventful.  But after boarding the flight to Paris in Atlanta we sat on the runway for an hour.  The pilot eventually got on the intercom and apologetically said the aircraft wasn’t mechanically ready to fly to Europe.  The groans were notably low decibel.  People don’t mind getting off an airplane they’re told it may not make it to the destination.

Another plane was found–does every airport have a hangar of spares?–and took off at three in the morning.  That was too late for me to make the connection in Paris to Genoa, so I wasn’t on it.  The next available flight was at four in the afternoon.  So I would miss the gathering of the group–that much was certain.

I spent the night in an airport hotel that seemed about a county away.  The flight took off on time the next day, headed to Rome, not Paris.  Soon it was time to sleep again.

In Rome we disgorged and unaccountably had to go through security (where could we have picked up scissors and bombs?) before going to passport control.  I had only an hour to make my connection, and I didn’t.  So caught the noon flight to Genoa, caught a cab to Principe train station and found myself here. 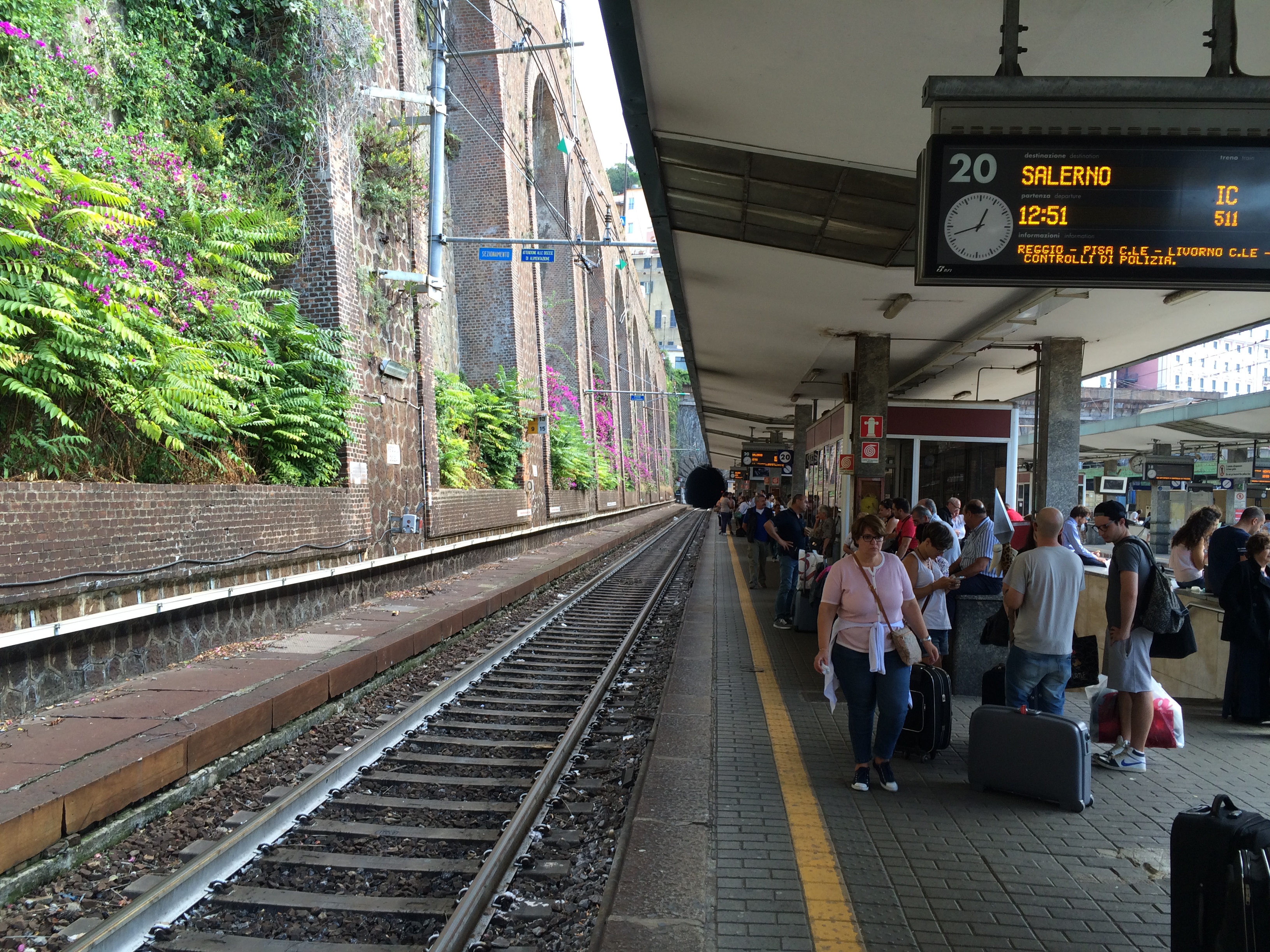 I carried an elderly couple’s bags up the stairs to the platform.  This proved to be a  valuable deposit in the karma bank.

I changed trains at Sestre Levante and got on the local to the Cinque Terre as the door shut behind me.  The stations weren’t announced and there was no route diagram in the train car.  Luckily, I didn’t fall asleep.  I managed to get off at Corniglia, the third of the five villages. 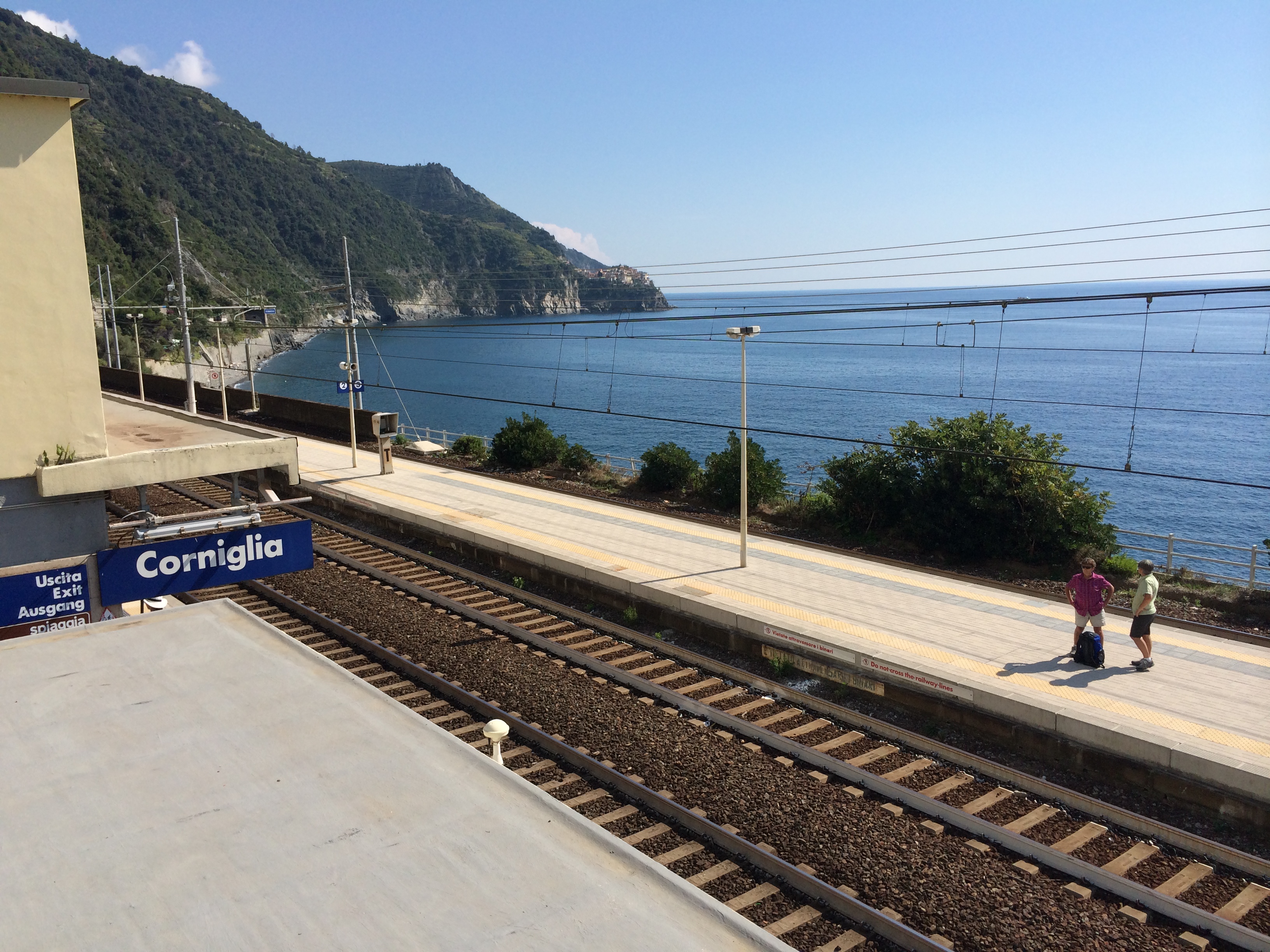 The station is on the edge of a steep slope; there’s nothing below it but stone and water.  The sun was bright and tourists were arriving and departing, many with trekking poles.  A sign announcing Corniglia (and the rest of Cinque Terre) as a UNESCO World Heritage Site said the village was 350 steps up the hill and also accessible by a 2-euro van.  I chose the latter.

The van deposited me a hundred yards from a hotel and restaurant where I was greeted by Daniele Ratto, the trip’s driver, humper of luggage, interpreter of local ways. 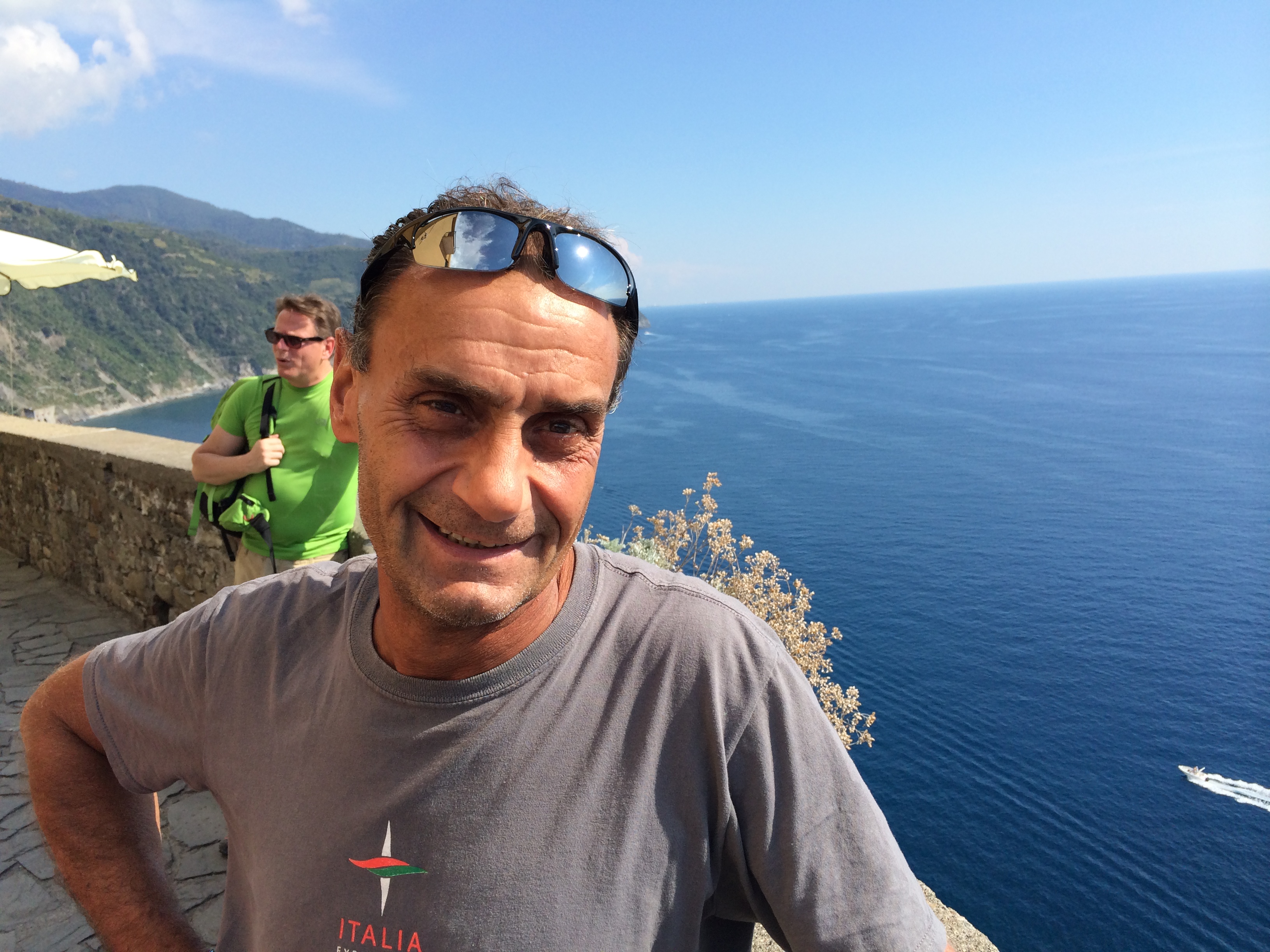 This was the view. 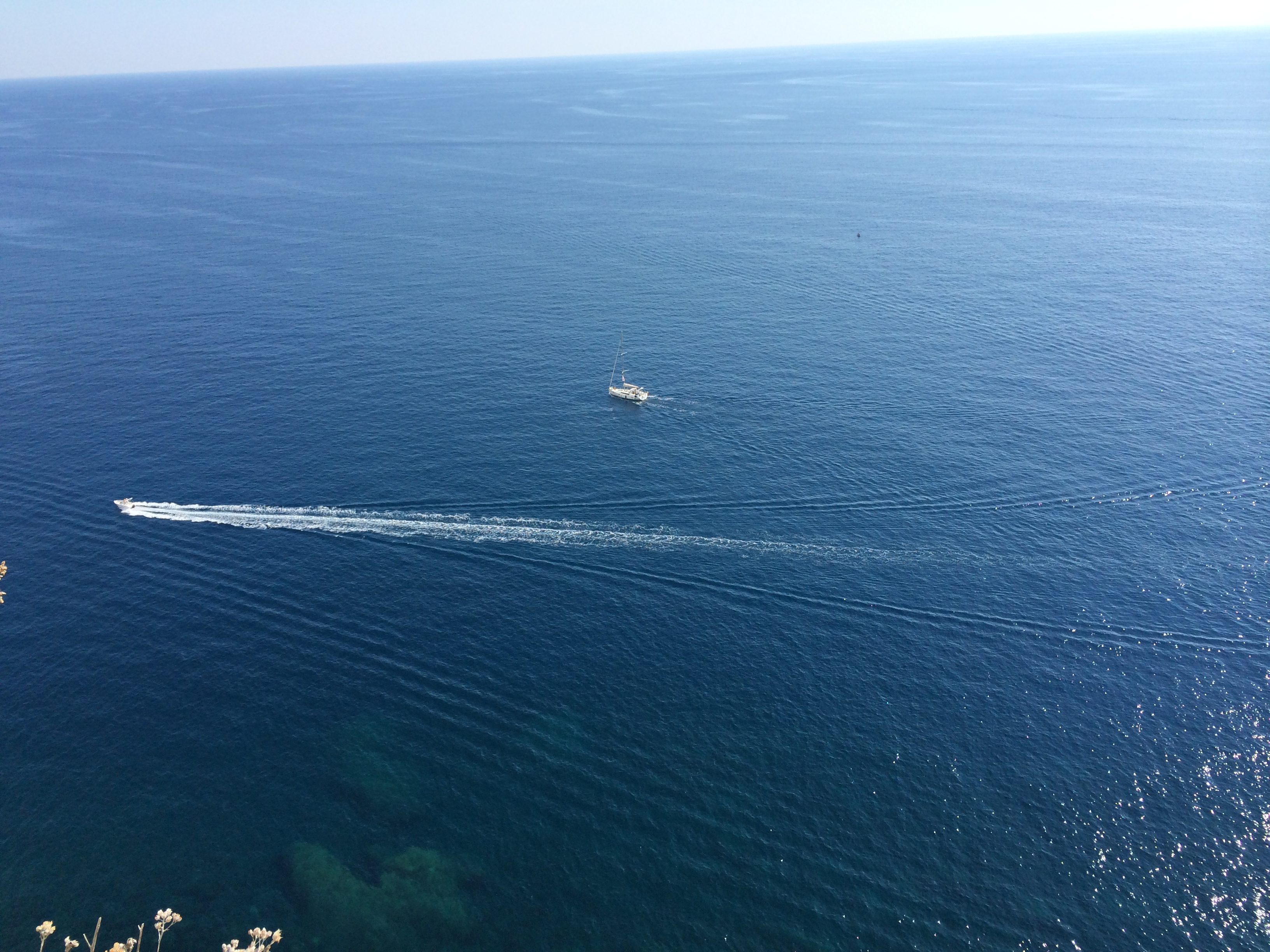 Corniglia has a small square with a large church and bell tower.  There’s also a chapel, also with bells, and another church at the top of the ridge a half-mile or so up.  The entire village is in an unlikely place, as (we will soon see) are its four sisters.  It’s on a slope of dense vegetation, scrubby trees, granite ledge, friable rock and thin soil.  The grade is so steep that it would require clambering on all fours in many places.  Building houses and farming would seem very far down the list of recommended activities.

But of course that’s what makes it such an amazing place.

A road–really an alley, navigable only by three-wheel delivery trucks–went off the square into the town.  The houses are like ones I’ve seen in other old European cities but that I’ve never seen in an American one.  It is hard to determine where one begins and the other ends; they appear to be part of one big simultaneously built structure that was then subdivided.  Undoubtedly that’s now how it happened.  But it has a mysterious unity and permanence, almost as if it had been excavated from the rock itself.

I’d love to get inside one, and I’d love to know how water, sewerage, electricity and gas were added.  But the only views possible are the clothing, wine and gelato emporiums that line the road.

The group was out on the water. They started from Monterosso, two towns to the north and were heading to Corniglia. All the outings are day trips. The nights are spent in hotels, and the meals (except for an occasional picnic) are taken in restaurants. Some of the expeditions of Tofino Expeditions are camping trips.  But not this one.

I put my stuff in the hotel room and walked into town. I took a stairway off the alley and climbed it until it leveled off into a passageway between front doors and the gates to back yards. The end of the summer vegetable season was on display in the back gardens—plum tomatoes hanging from staked vines, tan crookneck squash, greens.

The path led to a cemetery of crypts made of concrete, faced with marble and stacked eight high. Many had photographs of the deceased in oval brass frames. The earliest birth dates were from the 1830s. One that caught my eye was Gaetano Andreani Castagneto (1841-1932) who was (in Italian) “a veteran of the war of secession of the United States,” as well as a “capo squadron della MUSN.” No mention of which side he was on, but if MUSN referred to the Marines of the U.S. Navy, then it was the Union.

There was no obvious clustering of deaths during the influenza epidemic of 1918-19.

I walked back down to the main alley. As I was heading deeper into town I looked up and saw Jim Bean and behind him, Ellen, my sister, who were coming up from the landing and swimming spot at the foot of the slope, hundreds of feet down. They suggested I go for a swim.

I took the suggestion. The ancient stone path descended in switchbacks, protected in places by modern handrails. It’s hard to imagine carrying anything up it, although undoubtedly hundreds of years of the Corniglia’s contents arrived exactly that way, on head, back and beast. 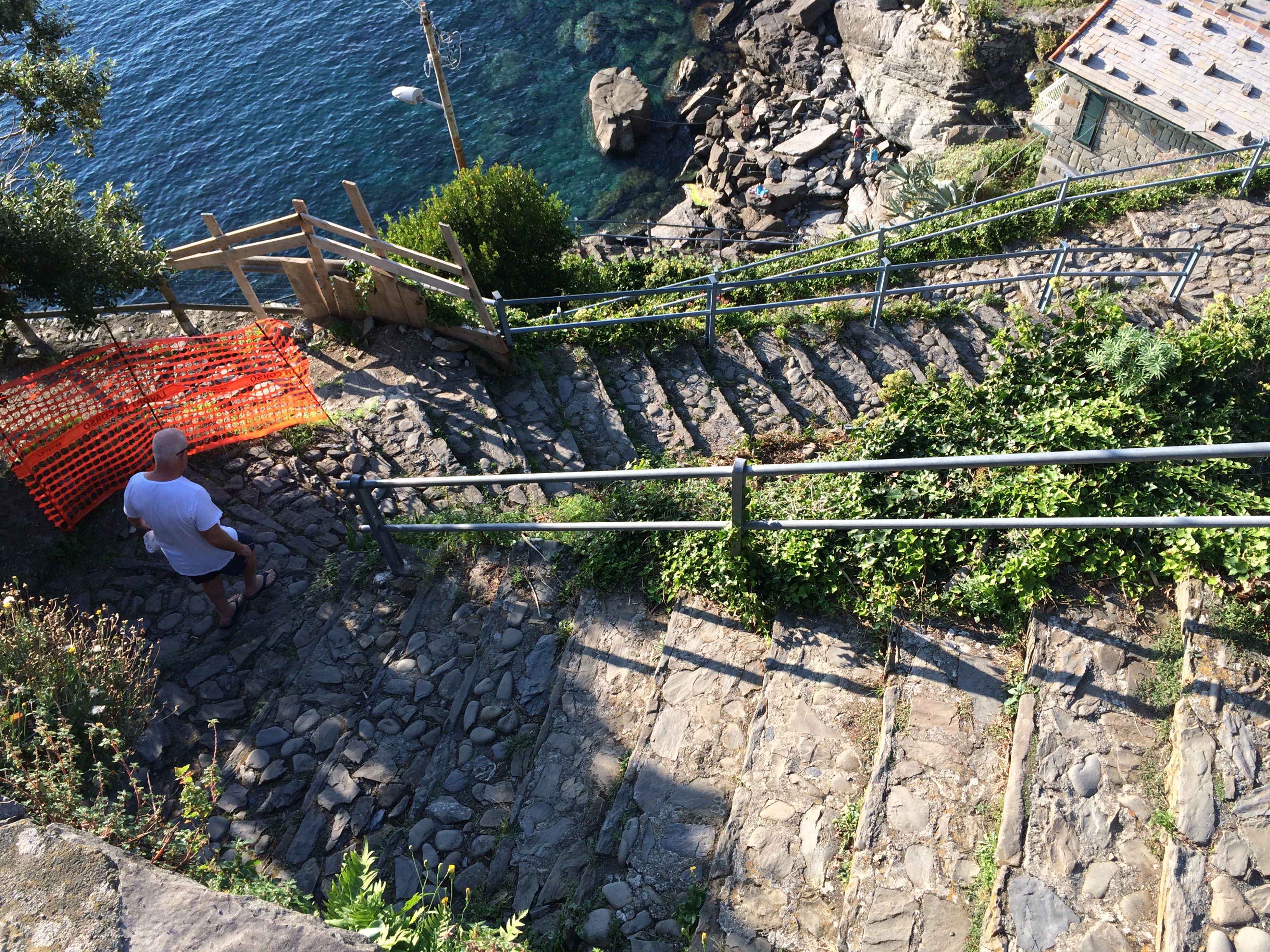 The town is separated by a swale from an equally steep slope with remnants of dry stone walls and the terraces they created barely visible. 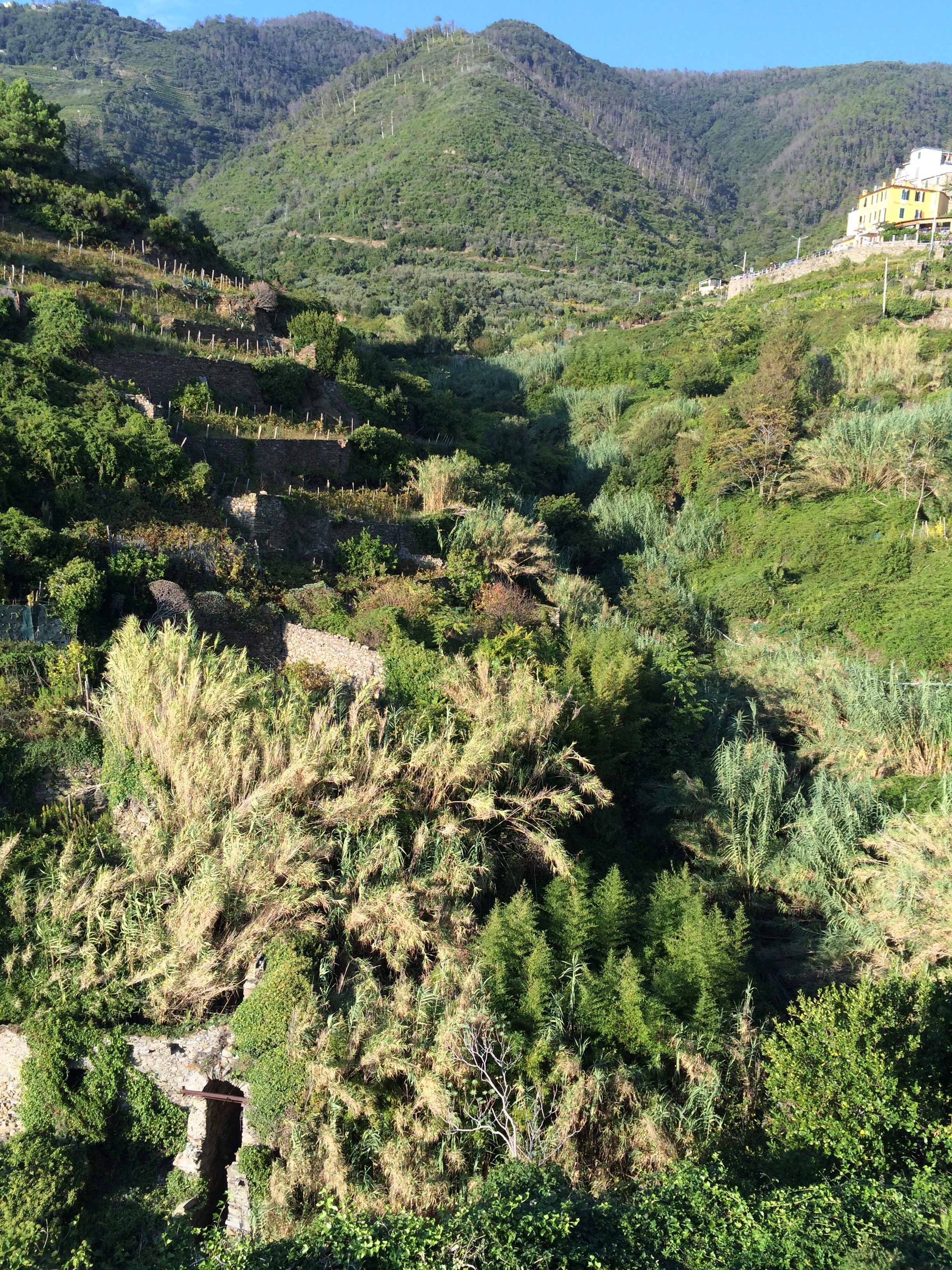 Daniele, my new friend, had given me the single room with the best view—a bit of the square, the headland across the swale, the sea. 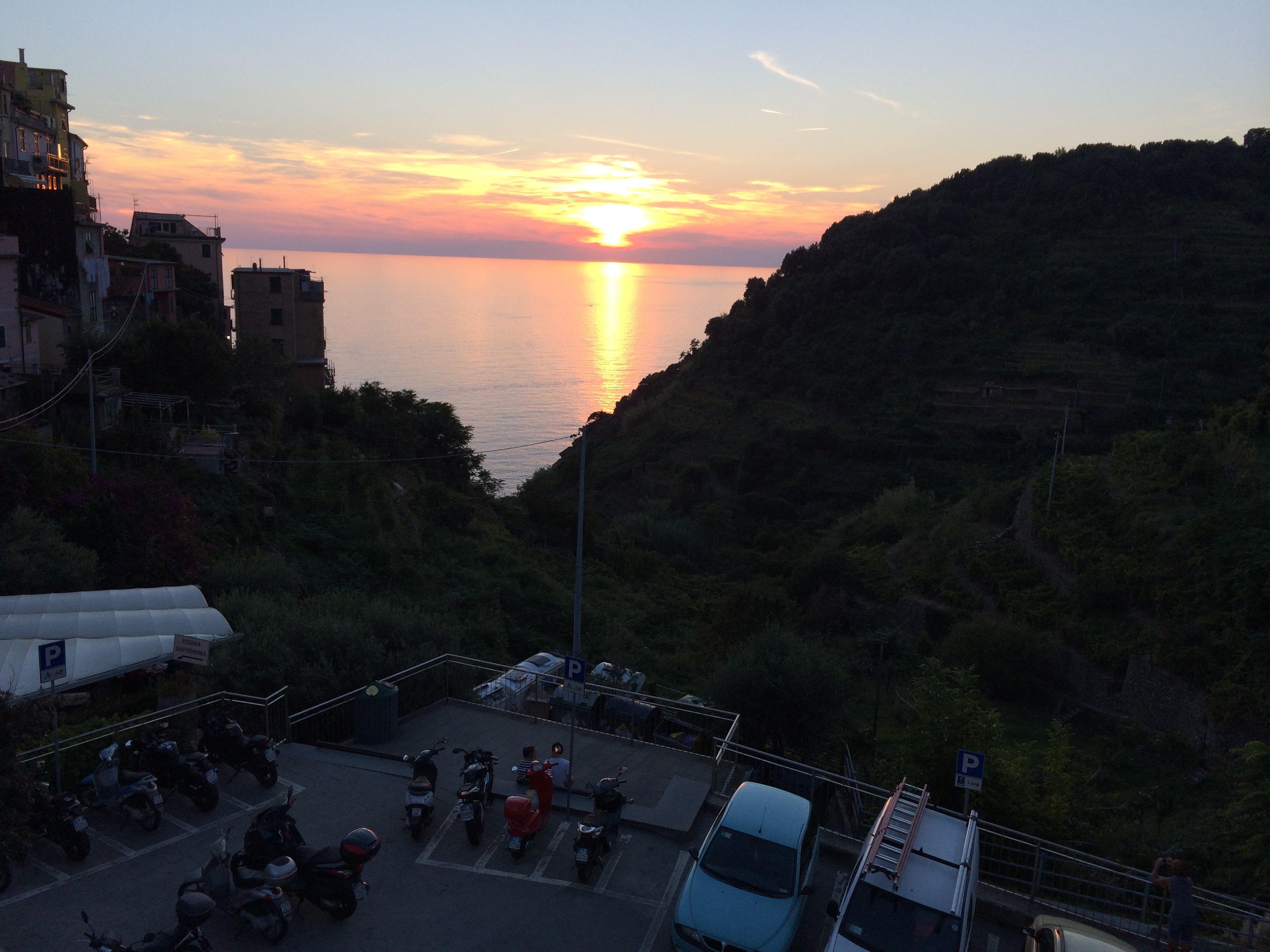 Although the town—and all of Cinque Terre—is crawling with tourists, it gets quiet early.  Maybe that’s the effect of wine meeting age.  When the church bell rang once at one o’clock in the morning I stuck my head out the window and looked at the square.

It was empty. I listened for another sound and heard nothing.