The goal of the walk along the Moray Coast was to stay next to the water to the greatest extent possible. 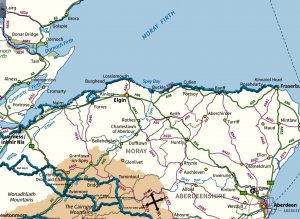 At the coast’s western end that’s easy enough, as the shore is sandy or rocky beach, or in a few places, mudflats. 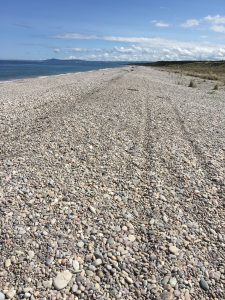 At Burghead, about one-third of the way across, cliffs appear intermittently between stretches of beach.  From Buckie onward, cliffs that dominate, with pocket beaches in between. 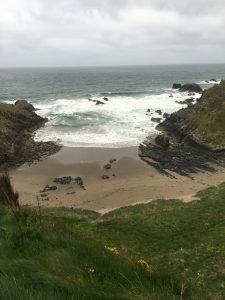 As a consequence, walking beside the water involves a calculated risk.  Several actually.

At high tide, there may not be enough shoreline to walk on at the bottom of a cliff face.  At high or low tide, the walking surface may be slippery.  There may also be streams coming down into the firth that are too deep to wade across.

I eventually figured out I didn’t have the time and energy to risk having to backtrack from an obstructed water-side route, and so shouldn’t walk on the shore unless I was pretty sure I could get up onto the cliff-top easily should the beach suddenly disappear.  I learned this lesson in a most convincing way just east of the village of Cullen.

I got to the end of a beach.  Although it was late afternoon, the sun was out, and it was warm and not windy, I decided to see if I could get around this headland.  Note the steep diagonal with the lighted ground behind it in the distance. 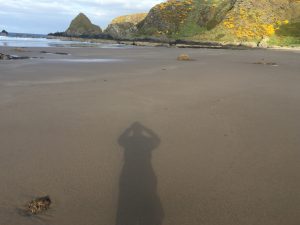 It quickly became obvious that going around the conical rock along the water’s edge wasn’t going to be possible.  So I started climbing over and around a series of grass- and scrub-covered rock buttresses that came down from the cliff top. 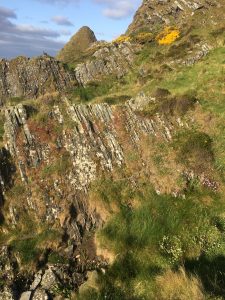 I got to a place where the descent down the buttress to the next piece of  walkable ground was too steep to consider.  There were two choices.

One was to go back to the beach and head inland from there.  This is the look back.  (It appears darker than it was because the picture is shot toward the sun). 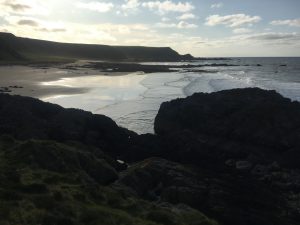 The other was to go up the knife-edge of the buttress to the top of the cliff.  This is as close as I’ll ever get to the Hillary Step on Mount Everest. 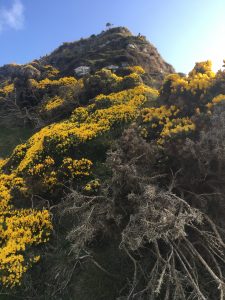 I decided to go up rather than go back.

It took careful choosing-of-steps, and would have been dangerous in wind or rain.  Trekking poles were helpful (indeed, I would say essential).  At one point I looked to the left and saw my shadow cast on the side of the next buttress, across the crevasse. 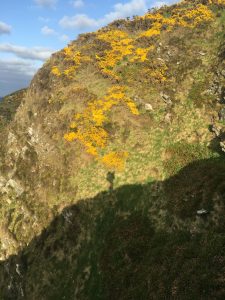 This was the view down. 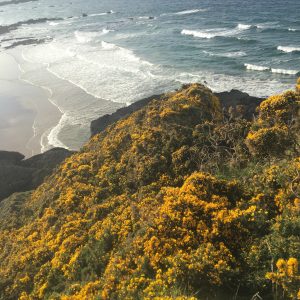 It was impossible to avoid going through gorse bushes in some places, with the attendant effects. 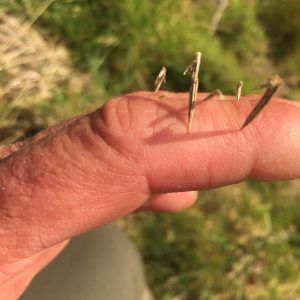 When I got to the top I hoped to find a gentle slope covered with grass, heather, or something else easily crossed.  Instead, I found more gorse.  And it was head-high in some places.  This was a problem.  It seemed I might not, in fact, be able to make my way through it to a farm field I could see in the distance.  Descending the route I’d taken to the top wasn’t really an option.  Or at least not one I wanted to take.

I’m happy to report I made it out.

Like a rat in a maze, I followed little clearings until they were obstructed by impenetrable gorse, backtracked and tried another.  I was lucky.  In the end there was always a route with a little walkable ground not covered with gorse where I could sidle through.  It would have been hard to bull one’s way through the thicket, although I supposed I would have tried that if I had to.

I was never so happy to see a trackless field of hummocky grass as when I got to the edge of this one. 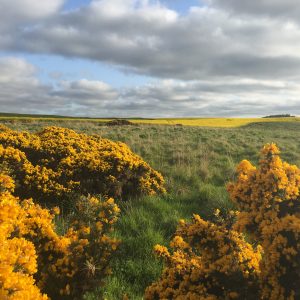 I stuck to the cliff tops from then on.