Within reason, a Challenger can decide where to end his or her hike. There were 42 finish points “nominated” (as they say) this year, 14 of them to be used by a single person. What they have in common is they are all on the North Sea.

The tradition is that one wades into the water with bare feet, a pedal baptism that returns one to ordinary life. These days one often takes a picture, too.

The place where I landed was St. Cyrus.  It is a village about 10 miles north of Montrose, the town where a post-Challenge celebratory dinner takes place at a hotel.  Eighty-six people were scheduled to finish there, nearly three times the number of the next most popular spot.

After I left the Wormald family and continued on my own there seemed to be a kind of time dilation.  The miles got longer, as did the time it took to walk them.  The sky was dramatic, both sunlit and dark.  This gave an intensity to the green of the grass and the yellow of the rapeseed fields, lens-shaped in the distance. 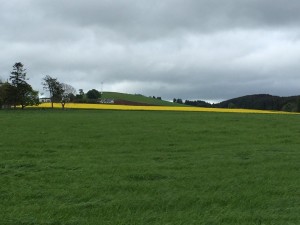 I chose the latter.

The road went between a pair of eagle-topped entrance pillars, leading me to conclude that Morphie was now the name of a farm, no longer even a hamlet.  I walked past a house with six cars parked beside it, and numerous sheds and barns.  I saw no one.  Beyond the buildings the road turned 90 degrees and rose straight and steady.  It would be the last climb of the walk. 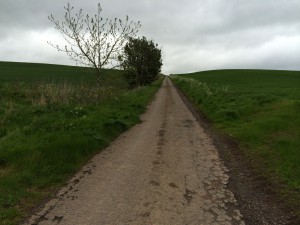 It seemed to go on forever.  After a while I decided to do something I hadn’t contemplated for the previous two weeks:  run.  With a stride both lumbering and mincing, and barely faster than walking, I got to the top.  I tell you, I could have used a little Morphie myself about then.

The road leveled off and in the distance, almost indistinguishable from the sky, was a stripe of gray, the North Sea.

As the road headed down the air turned colder.  Or perhaps it was the end of exertion and that it was almost 8 o’clock at night.  Suddenly a tee shirt wasn’t nearly enough.  I put on a hooded fleece, then my rain jacket and finally my mittens.

The road descended further and by dead reckoning I got to what I think was the intended terminus. It was a bluff just beyond a church graveyard that overlooked a beach and a bight with a single fishing vessel off shore.  Near the edge of the bluff was a bench and the start of a path that led down to the beach. It was a goat trail that would have taken, I guessed, at least 15 minutes to go down.

I initially saw no one, but in a few minutes a woman appeared on the grass along the bluff, walking an ancient basset hound.  When she got to me I asked her if she would mind taking a picture.  She readily agreed.  After a little instruction, this is what she took. 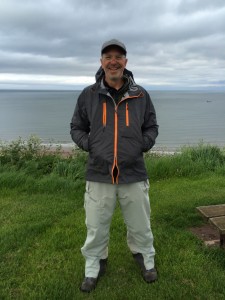 Her name was Sheila Brown.  This what she looked like. 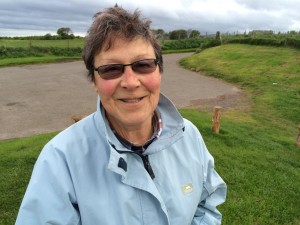 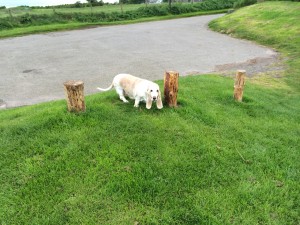 I didn’t walk down to the water.  I decided to do that the next day.  I was freezing and I needed to get to the hotel, which was a couple of miles on this side of Montrose.

As I walked passed the graveyard, who should appear but Maggie Wormald, hopskotched again in front of her husband and daughter and walking back to meet them.  They’d decided to go the whole 25 miles that day.

I walked to the main road and found a small hotel with a pub (and kitchen) still open, and a bartender with the bus schedule.  I had just enough time for dinner before the bus to Montrose arrived.

I caught it.  The driver said he couldn’t drop me in the burg of Hillside, where my hotel was, as it was not a stop.  But he offered to call a friend who drove a taxi who could meet me at the Montrose stop and take me back to Hillside.  I accepted.

I got to the hotel, checked in and went to sleep.  The walk was over.  But not officially.

I got up the next morning, did some writing and then went down to the hotel bar to see if someone there had a bus schedule.  People were eating lunch.  The bartender said I would have to take a bus south to Montrose and then catch one north to St. Cyrus.  After my foot-dipping ritual, I would then have to catch a bus south to Montrose and sign out at the Park Hotel, marking the official end of the Challenge.

It was going to be a complicated afternoon.  But I’d just walked 240 miles with a pack on my back, so who was I to complain?

I left my pack at the hotel–I was coming back for the night after the celebratory dinner–and went out to walk around Hillside until the bus arrived.  There wasn’t much to see.  As I stood at the hamlet’s main intersection, a car pulled up.  A woman got out and asked if I wanted a ride to St. Cyrus.  She and her male companion had been eating in the hotel bar and heard my inquiries.

I of course accepted.

It was a kind gesture at the right moment from April and Alan (yet another!)  They dropped me off at the unmanned visitor center at the southern end of the St. Cyrus beach, a strand perhaps two miles long under cliffs 200 feet high. 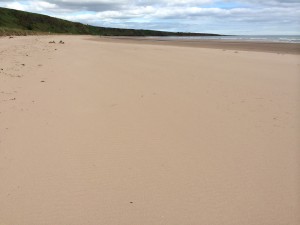 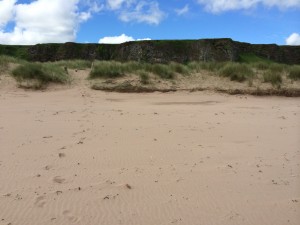 I walked up the beach.  It was a beautiful sunny day.  A couple of people were running their dogs but it was mostly empty.  Sticking out of the sand were the stubs of poles that once anchored nets that ran perpendicular to the beach into the ocean, driving salmon heading for the River North Esk into traps. 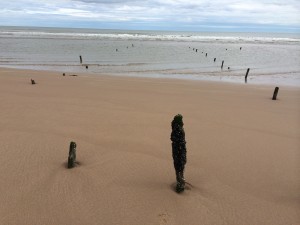 Every once in a while I came across the end of a rope, secured to its past somewhere under the sand, washing back and forth in the incoming tide. 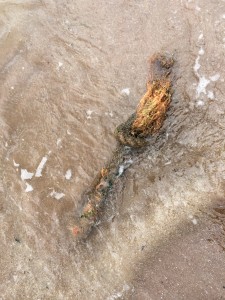 The sun was warm and the sand was wide.  I picked a place and took off my shoes and put my feet in the sea. 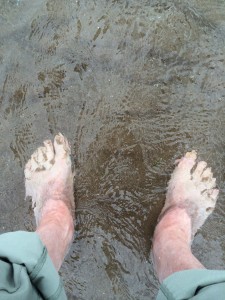