I was the last to leave, except for two people with German last names who were arriving by train later in the afternoon. As I sit in the mouth of my tent on a gravel beach at the end of a loch I have entirely to myself I expect to see them coming along the edge of the water any minute.

I don’t think I project confidence or experience to the fellow Challengers I’ve met so far. The night before the start there were about 10 in the bar or the Strathcarron Hotel, drinking serial pints, talking about the election, trading stories about previous crossings, describing with modest British ego gratification their gear and how they chose it. At one point a guy came in with a pack the size of two rugby balls, eliciting exhalations of admiration.

All the while I was at my own table tapping away on the miniature keyboard with sotto voce curses and sighs. I introduced myself to no one. At one point a man who had played a couple of reels on a harmonica (quite well) came over and gave me a mini-lecture on the pentatonic scale and how it might be used to unite peoples. (I don’t do his argument justice; there was more to it.)  I closed the bar down at 11 o’clock; it was the only place with good internet signal.

The next morning at breakfast I was seated by the maitre d’ at a table with three Challengers. I introduced myself, and after a while one of them asked, “You’re not doing the Challenge are you?”

The previous night, and indeed right then, I was wearing khaki pants (but British khaki!) and a collared shirt. They’re my dress-up clothes, or possibly my disguise. In about an hour I would stuff them into an envelope and mailed them to myself in Montrose.

My interlocutor looked slightly incredulous. The three were dressed in wicking, quick-drying, water-resistant fabrics. Britons have come a long way from climbing mountains in broghans, tweed and ties.

After about a minute he asked, “Have you done it before?”

I thought I might see at least one of these three guys today, but that was the last of them.

When I was finished breakfast and checked out of the room, I went over to the mail-sorting room in a nearby building where the twice-a-week circuit-riding mail clerk had just opened for business.  I gave her the envelope stuffed with twice-worn clothing and a book on how to navigate by map and compass.  I mailed them second class, no rush.

After I checked out, I brought my pack downstairs and put it on a picnic table in front of the Strathcarron Hotel.  It was a gorgeous, sunny morning in the low 50s.  I had an idea.  I went back to the mail clerk and asked her if she had a scale that might weigh a “rucksack” (as they call them here).  She said she might.

I brought mine over and she cleared a space on her desk.  It beeped three times the two times I put it down.  Its limit was 15 kilograms.  She went in the back and came out with a bathroom scale that measured in kilos and stone.  I stood on it and then hefted the pack and stood on it again.   Approximate weight:  19 kilos.  (She rounded it up to 20, but she wasn’t carrying it).  I thanked her and staggered back to the picnic table.

Here’s what I looked like.  (I promise, there won’t be a lot of these.) 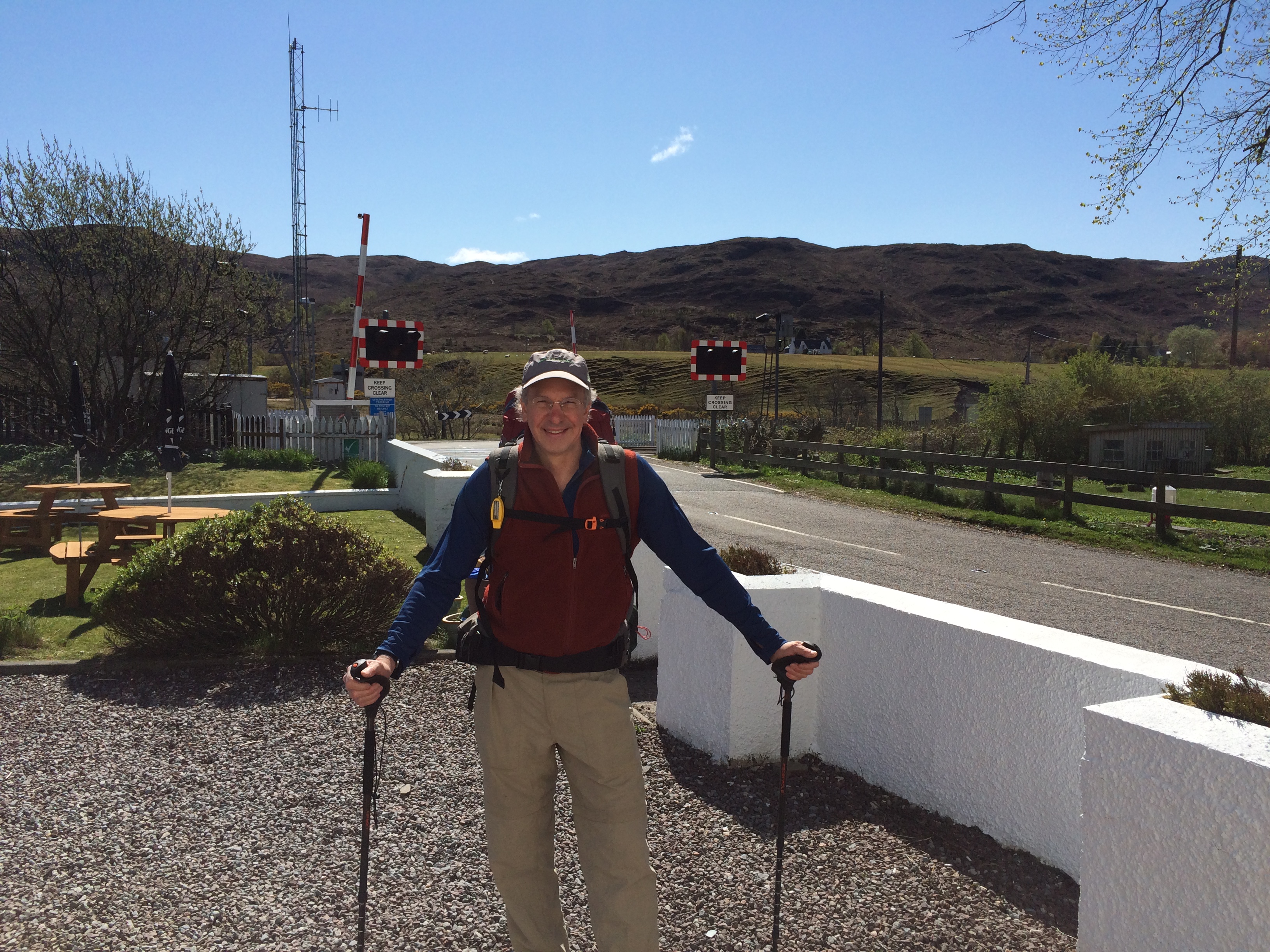 On the first pitch off the road and into the bare brown hills I turned around and saw a farmhouse with a bonfire blazing next to it. Spring cleaning. I could hear the wood crackle. 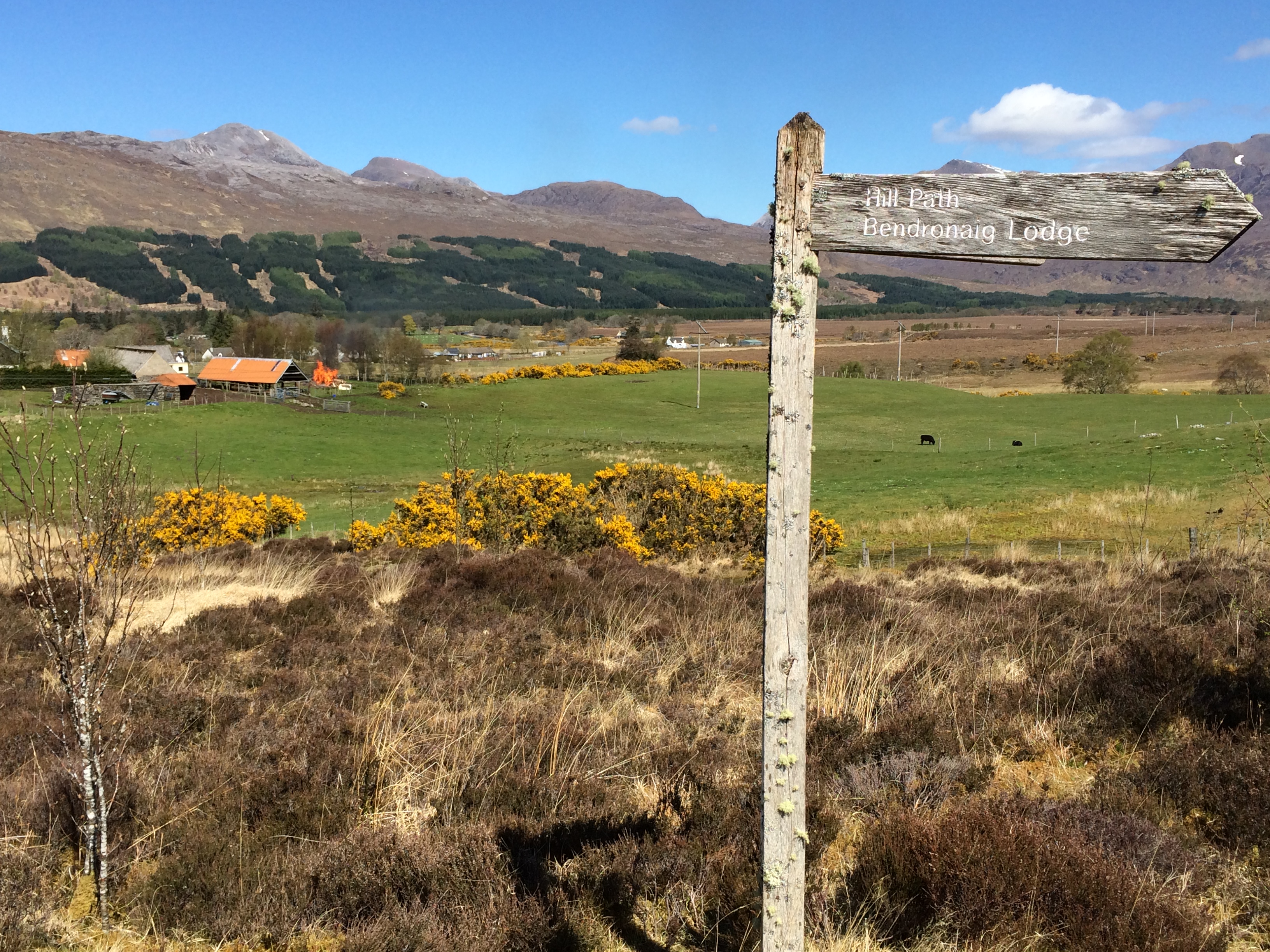 It was a classic Scottish landscape (I say like an old hand) the first few hours of walking.  Round hills covered with heather and moss except for the few geometric patches of twelfth-growth trees. The palette had five colors: brown, gray and green for the ground, blue and white in the sky. There were a few birds, an occasional salamander in the grass, but otherwise no wildlife. Coolness and warmth cycled almost by the minute as the wind blew and clouds covered the sun. 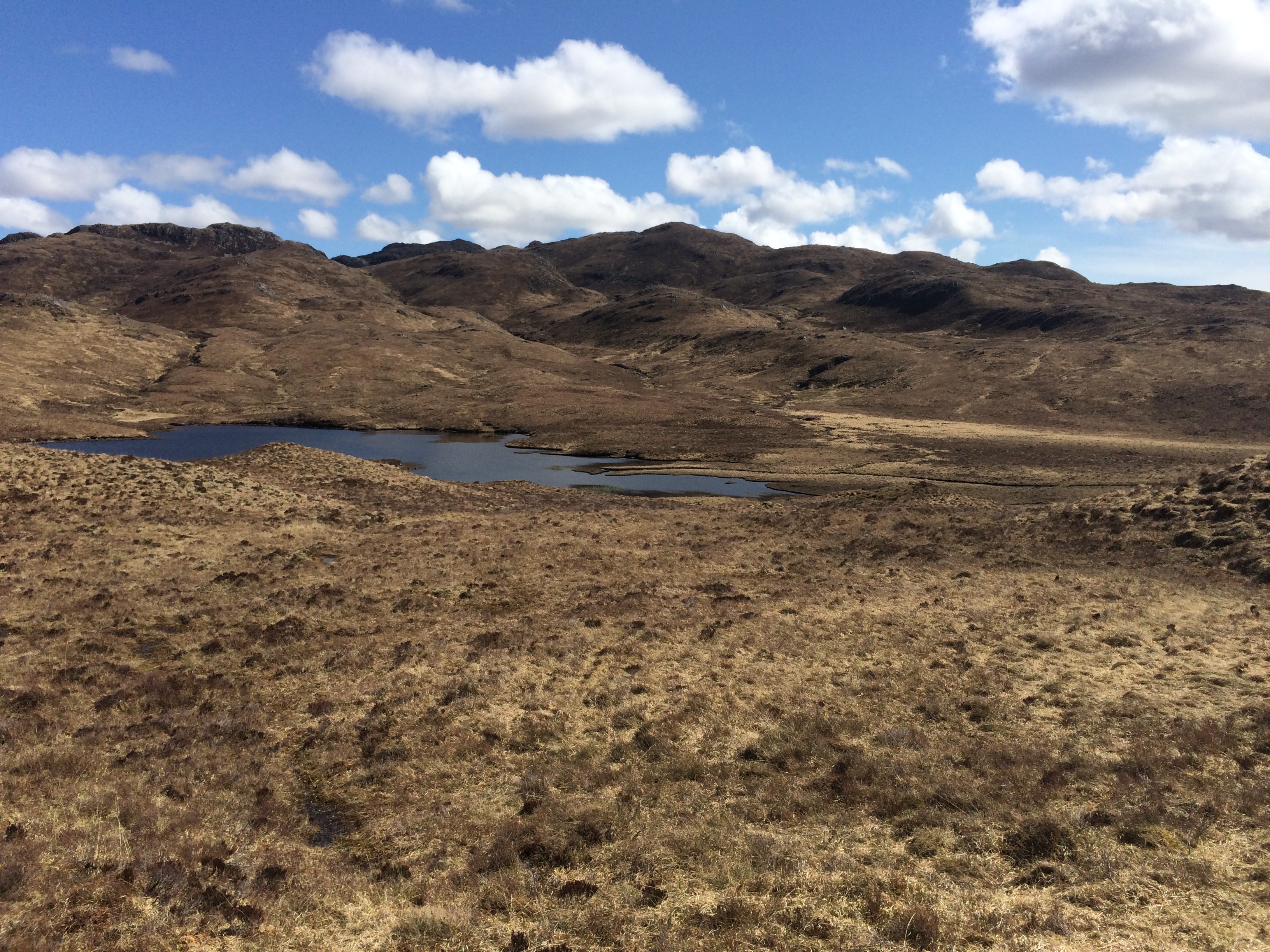 I passed a couple of people coming the other way, obviously not Challengers. I stopped for an oat bar and half of my mini-thermos of tea at 2 in the afternoon. The tea was so hot I had to drink it slowly. I pronounced to myself that bringing a thermos was brilliant.

I eventually came to a bothy owned by the Attadale Estate–the gigantic tract of land I was tromping on. Bothies are abandoned stone farmhouses repurposed for hillwalkers. This was a particularly nice one, although most of the stone had been covered in siding. 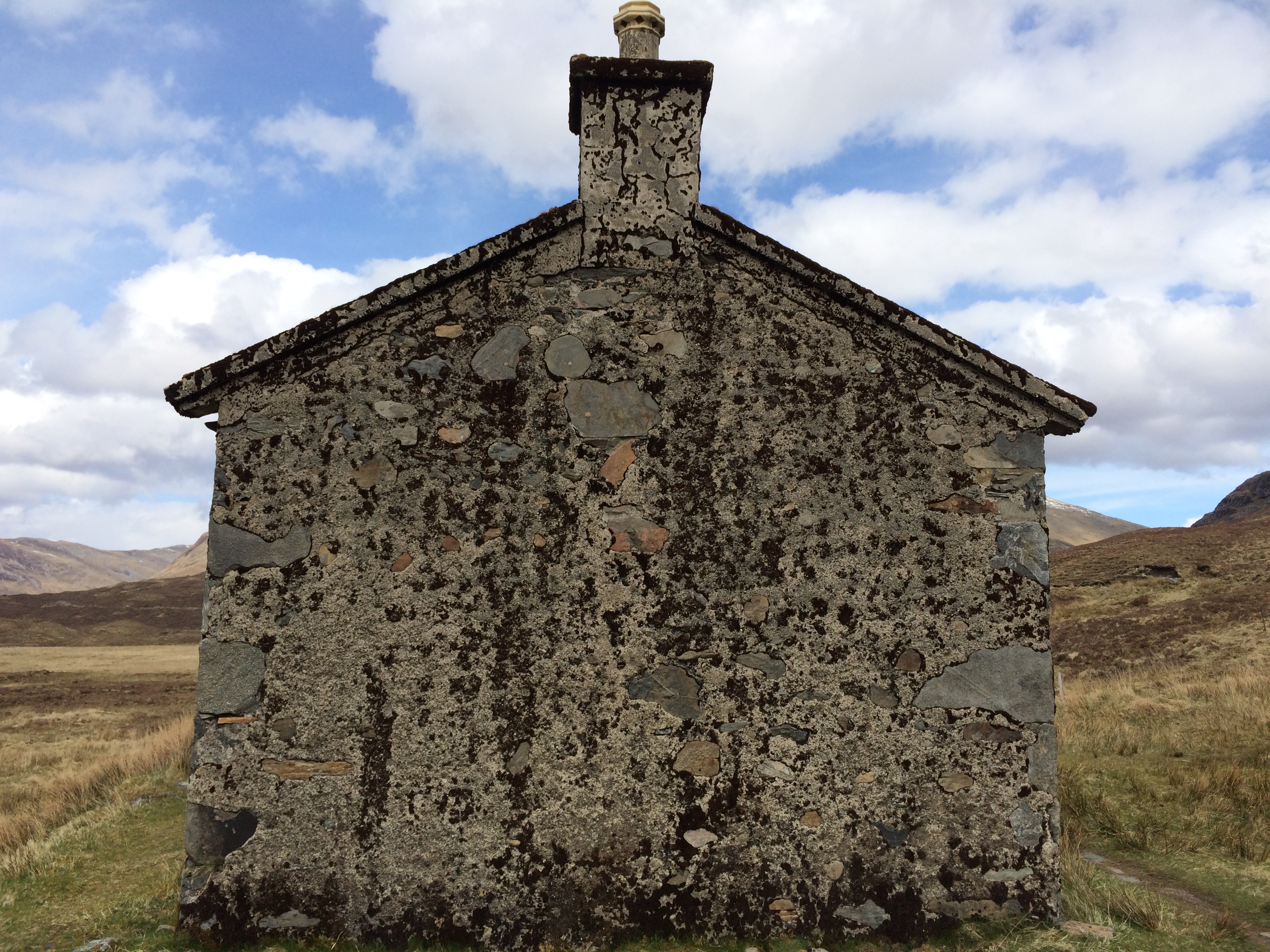 There was a large central room and one one side a room with a table and candle stand, and on the other side two smaller rooms. Each room had a small fireplace surrounded by glazed tile for burning peat or coal. 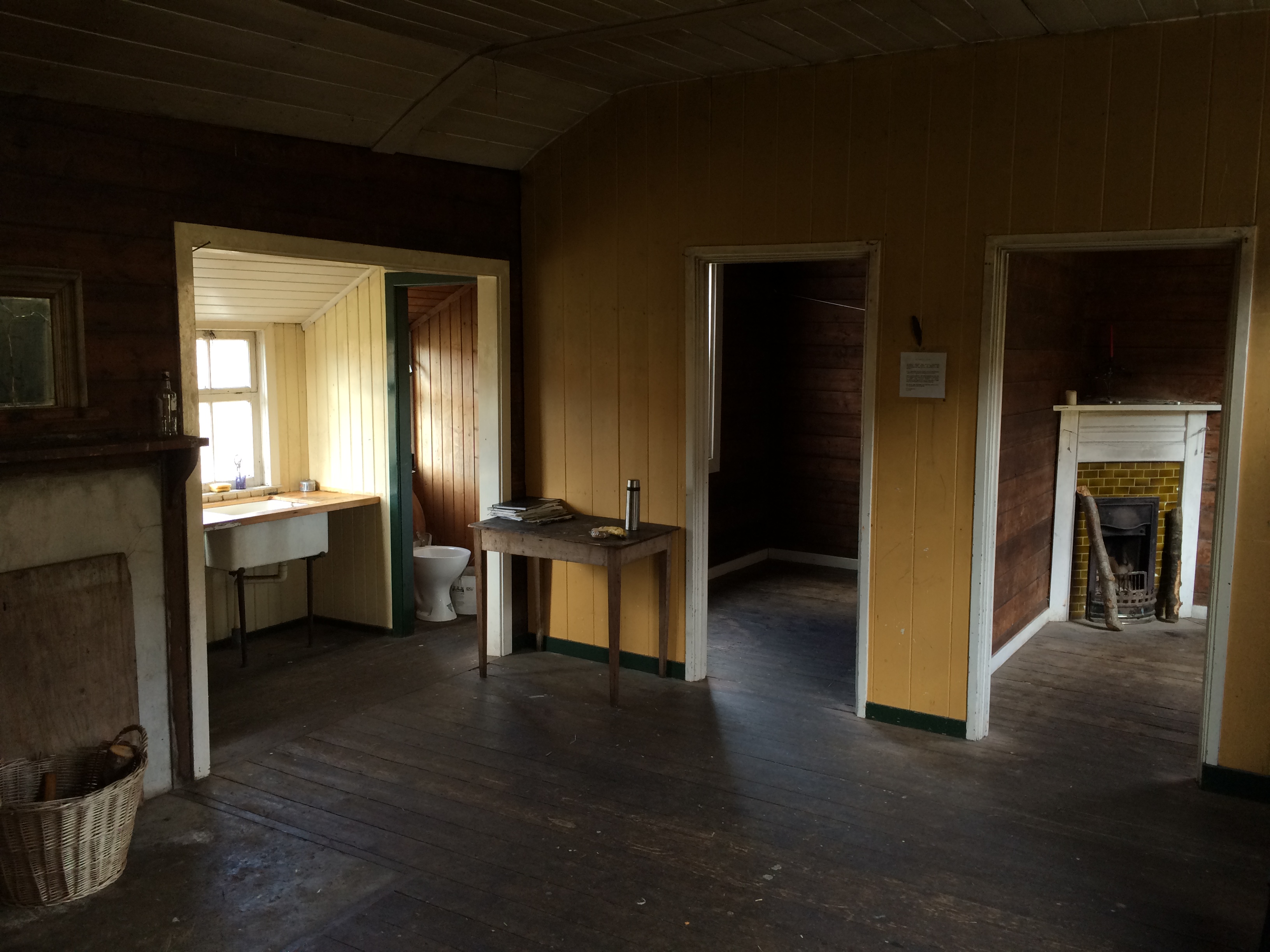 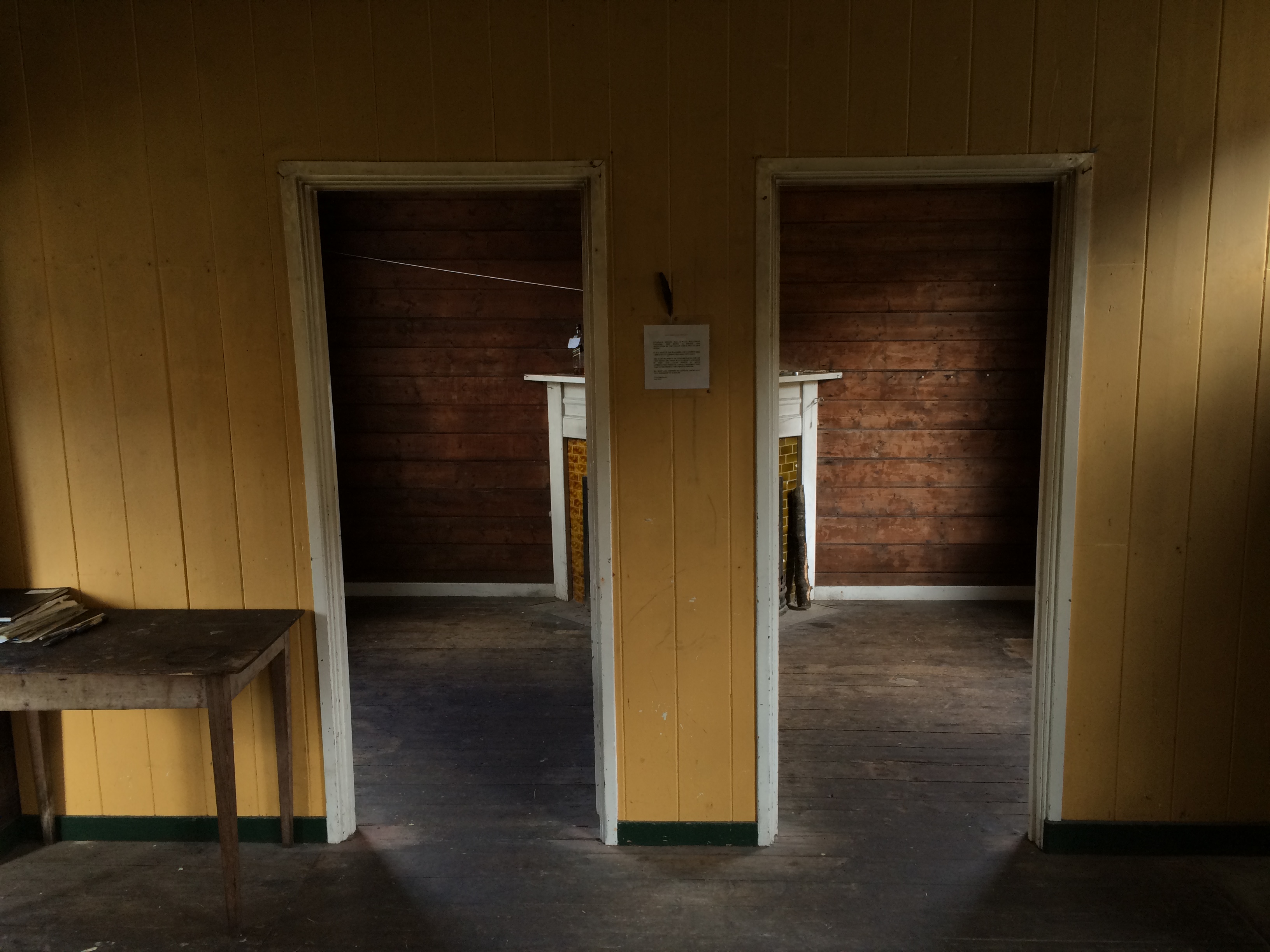 A plastic-covered notice on the wall from Ewan Macpherson, dated June 2004, asked people to limit their stay to two nights. “It is a refuge for walkers and climbers, not a free self catering holiday cottage.

There were a couple of empty tins, two saucepans and a kettle with a broken handle on the wooden counter next to the sink. A window with four divided panes looked out on the meadow, the barely visible bank of the burn, and the brown hills beyond. I was sorry I couldn’t stay my allowable time. 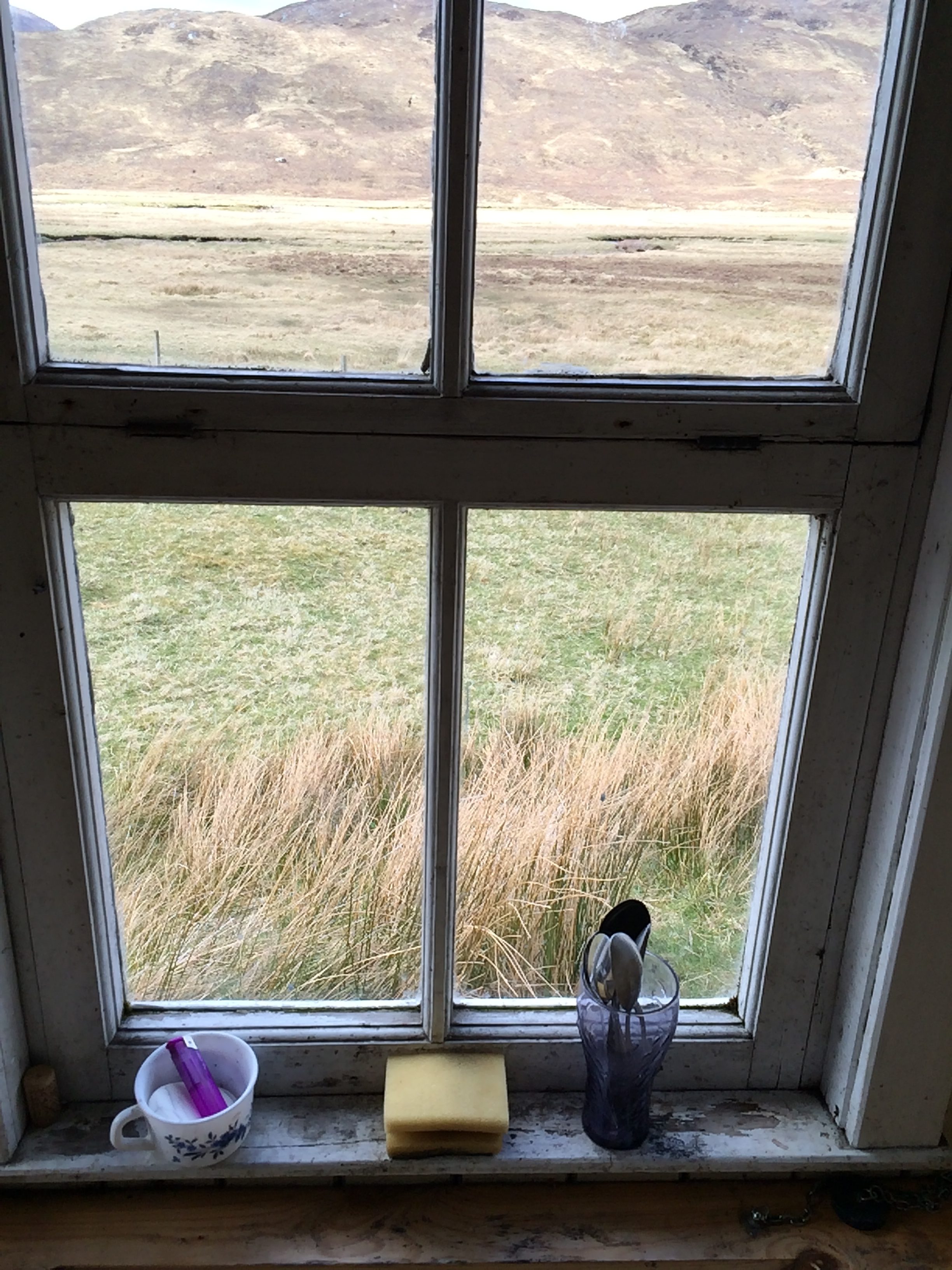 But it was on to Loch Calavie. This is what it looked like when I came over the hill. 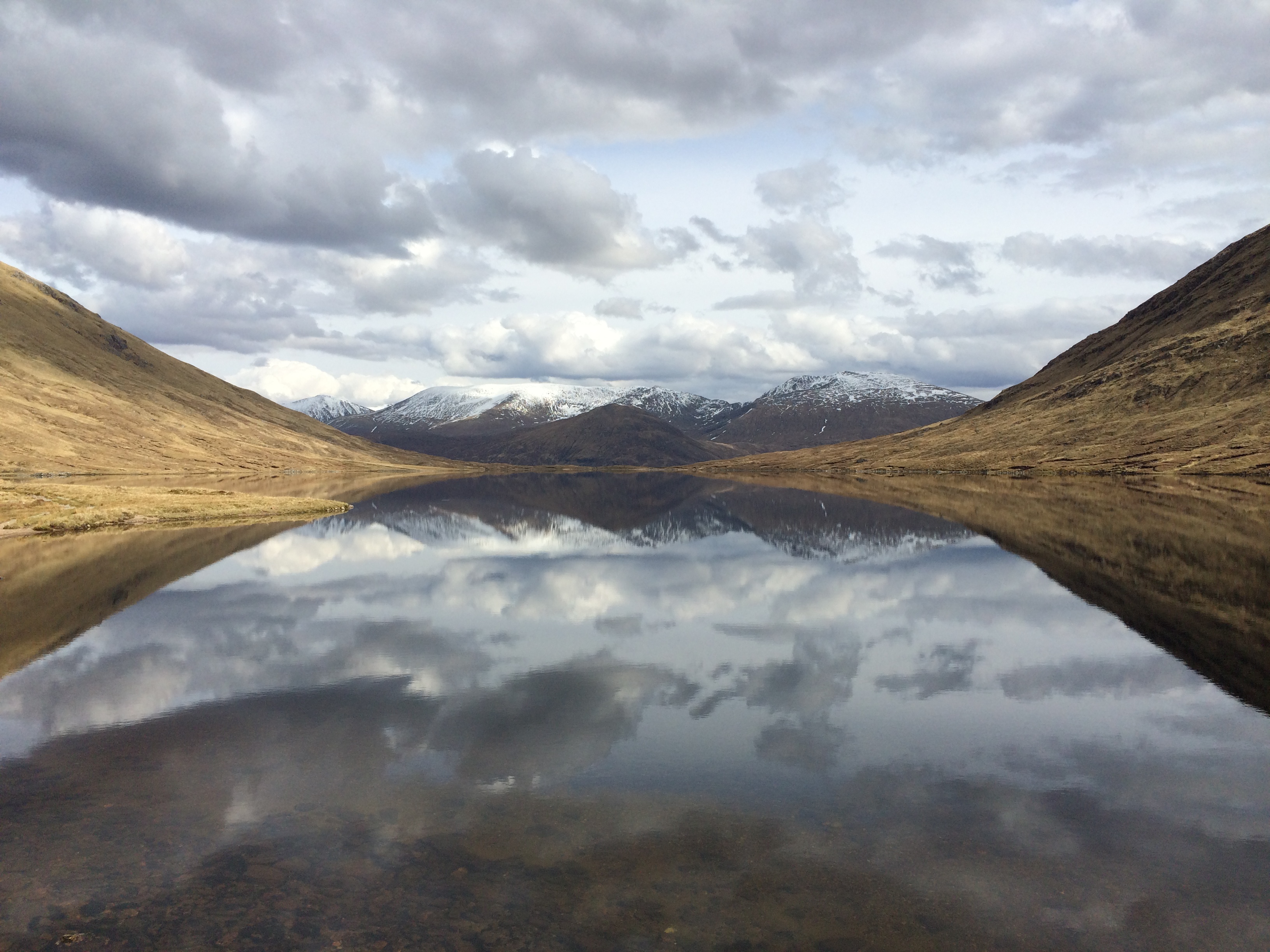 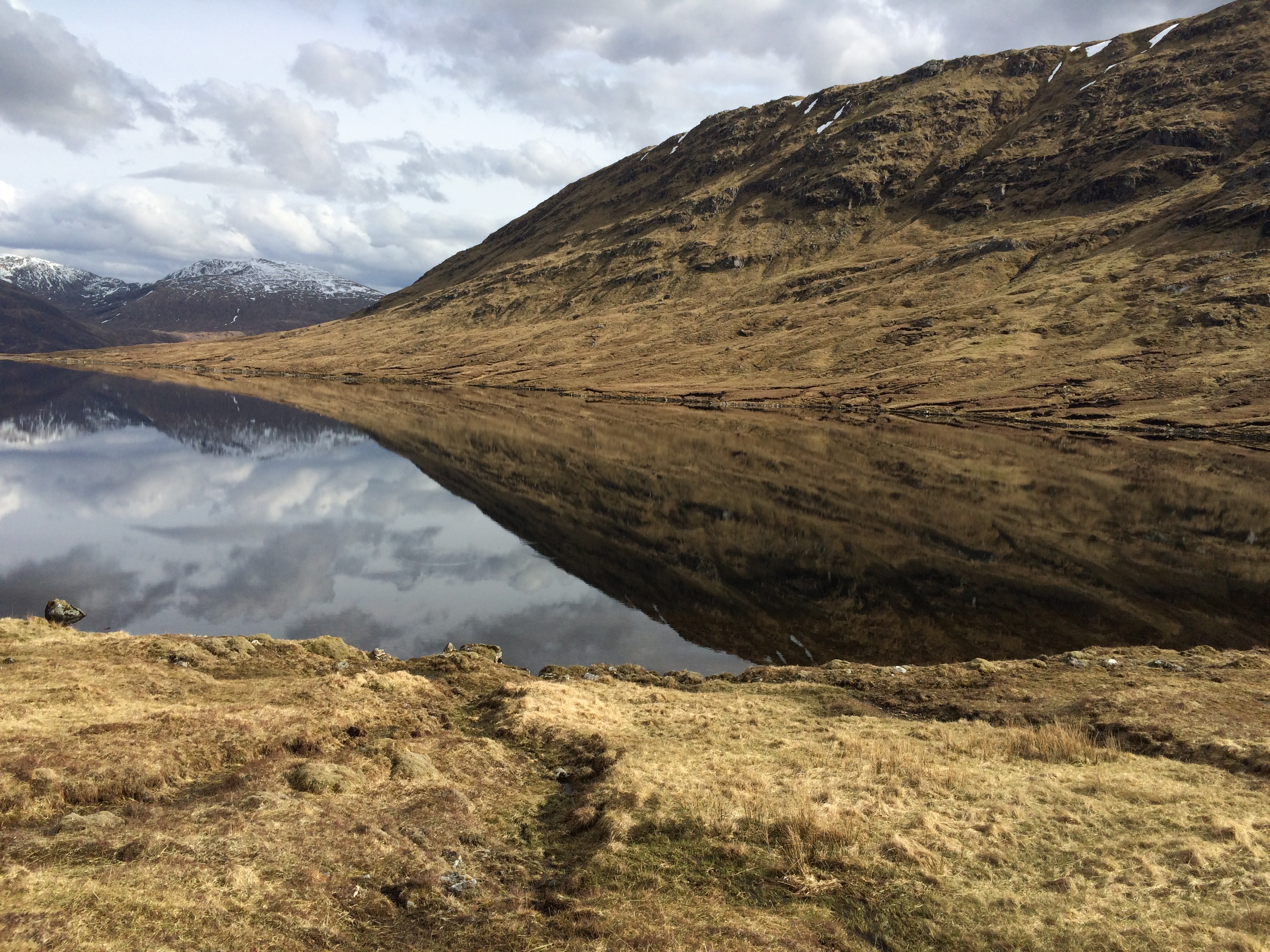 I was told it might be hard to fine a place to pitch a tent at the eastern end, which is where I had set my stopping point in February, where everything was just places on a map.

As I walked along the northern border looking down from the stone road down the slope of grass and moss, it did in fact seem unlikely there was a flat place for a tent, let alone a dry and good one.  Then I noticed a couple of tan smudges at the end of the lake.

As I got closer, they declared themselves to be gravel beaches, although how big and how slanted and damp was uncertain but they seemed the best bet. 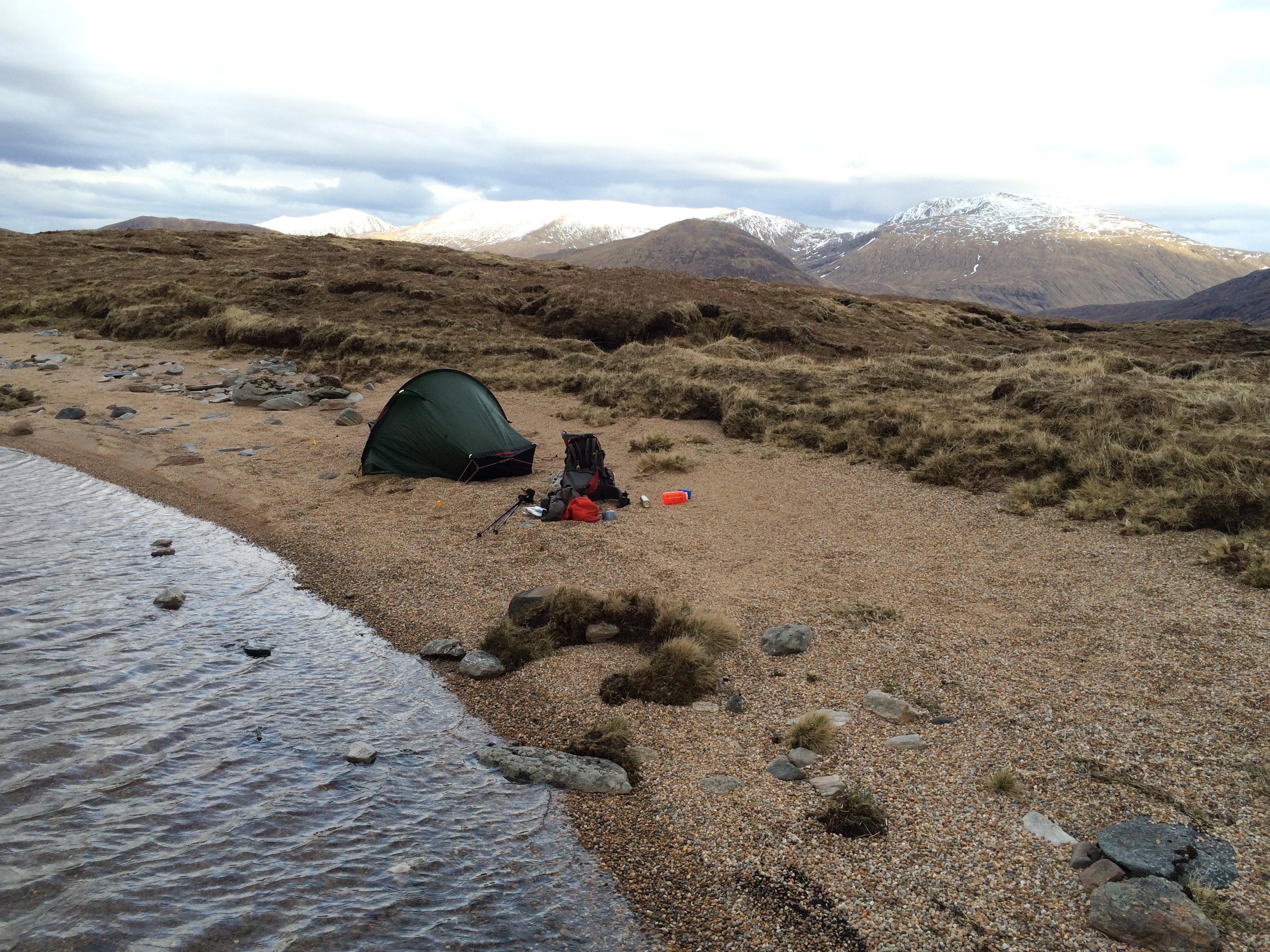 I surveyed three spots, started setting up on one but then moved to another farther down the beach that required moving fewer rocks.  There are few things better to pitch a tent on than gravel, in my experience.  It’s a surface that can be sculpted; it dries quickly, and it doesn’t stick to things.  Its only drawback is that it takes pegs poorly.

But gravel turned out to be the least thing to recommend this place.  I’ll just call it beautiful.  This is what it looks like from my tent, just before 9 o’clock. 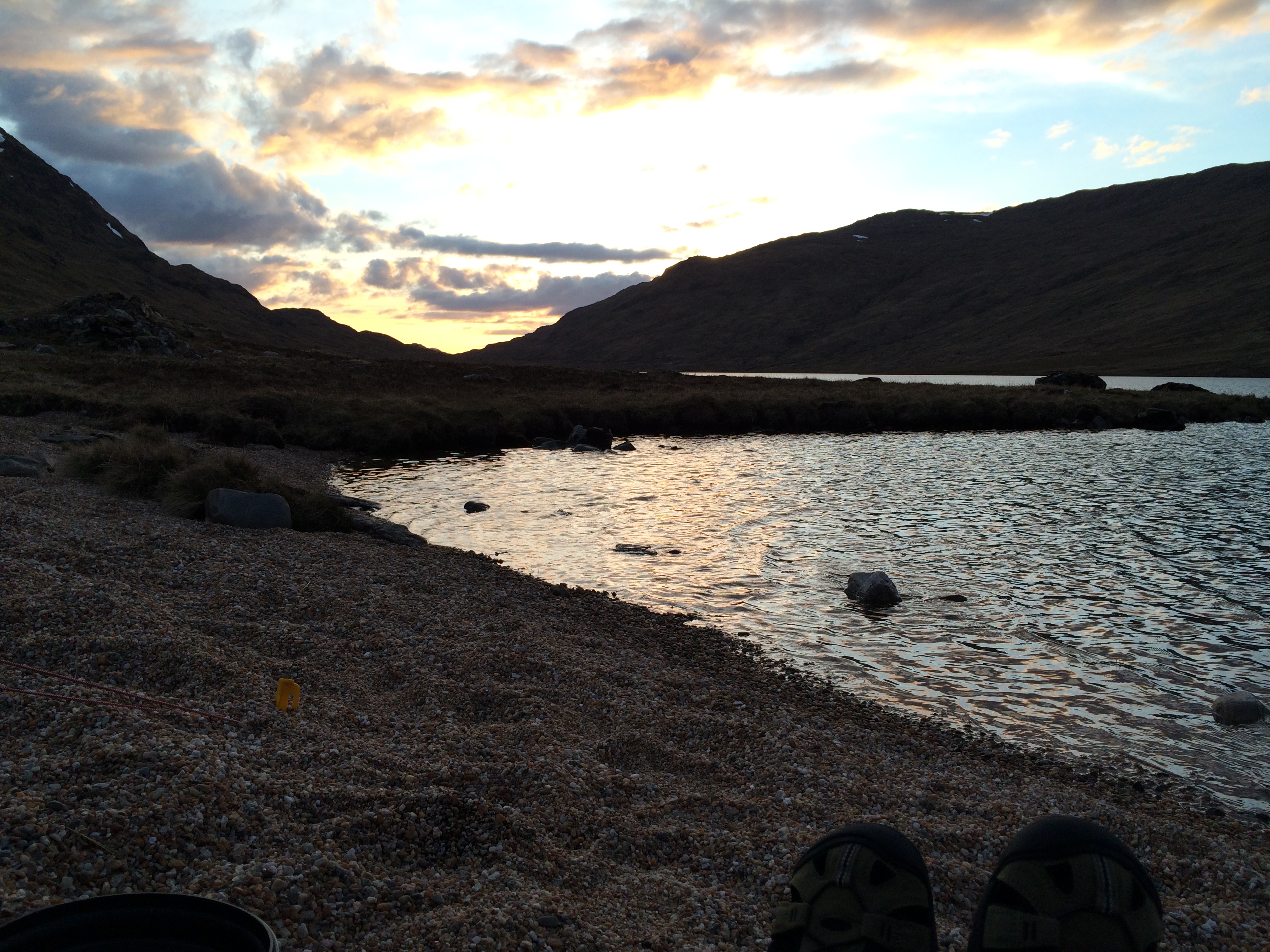 There’s nobody here but me.

When I got up and went outside at 10.49, I looked down the loch.  The sky still had a tint of afterglow.  Venus had just risen over the V-shaped slot between the hills that I’d walked through.  The only thing already visible in the night sky, it hung like the bead over a gunsight.