One of the interesting things about The Great Outdoors Challenge is that it preferentially attracts older people, for a variety of reasons. Of course, there are many exceptions. But I’m not one of them.

You get to meet people of one’s own cohort who’ve lived very different (but oddly familiar) lives. I met Brenda Manders.

We ran into each other where Glen Avon meets Glen Builg, late in a day in which BB-size hailstones had fallen three or four times. 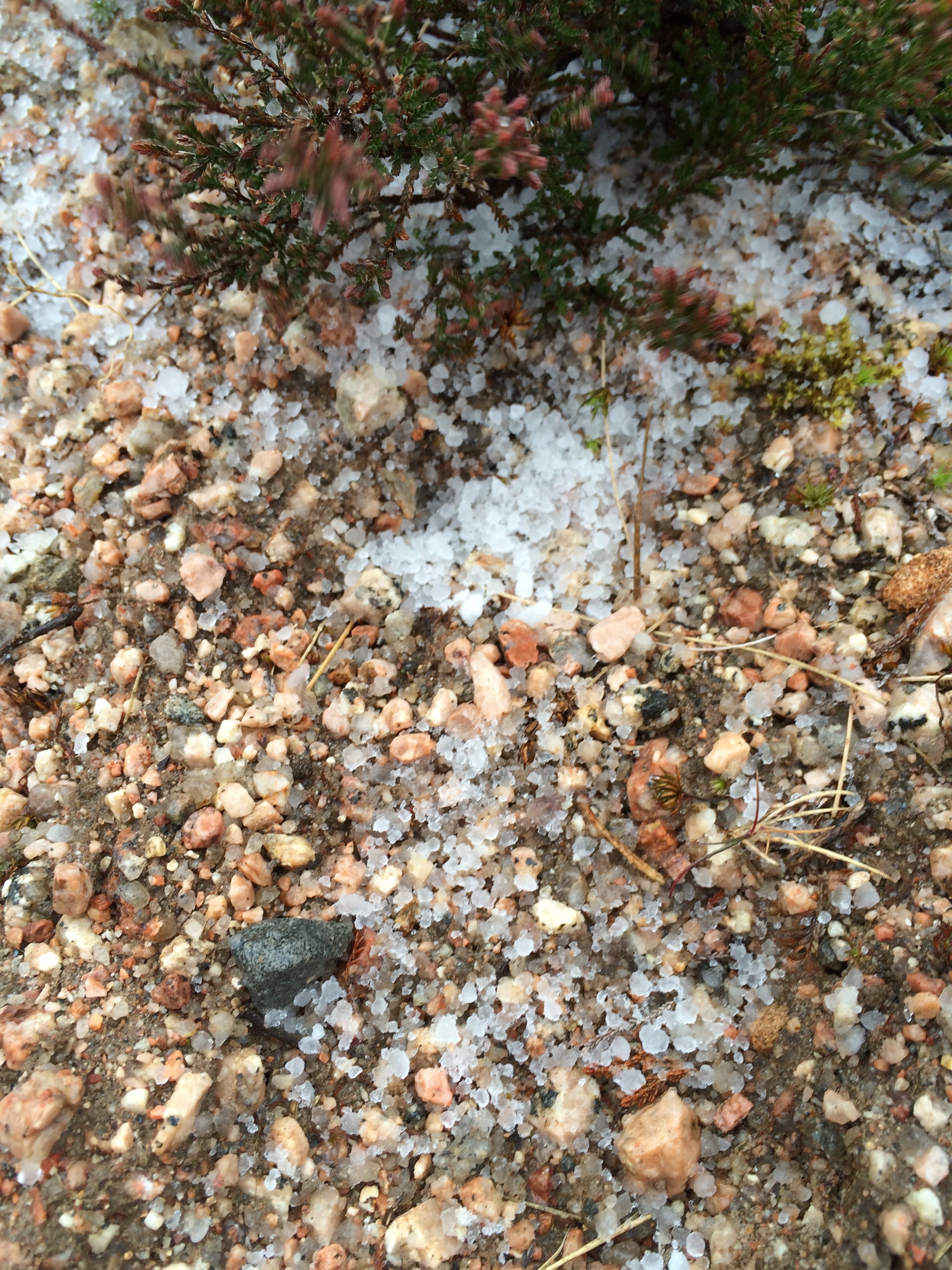 It was sunny, however, when I crossed a bridge over Burn Builg, looked left and saw someone coming. I waited and Brenda approached.

She is a 59-year-old woman, a semi-forcibly retired accountant who lives in Nottingham, England. She was born in 1955 and is roughly my baby-boom equivalent, not counting the difference in sex, nationality, and lots of other things.

Brenda came from what she called “a very working class family.” Her father was a mechanic who, like her mother, left school at age 14. His father was a farm laborer, and Brenda’s father followed him. He learned how to maintain and repair tractors, which were a new addition to agriculture in the 1930s. He was young at the outbreak of World War II and got into it near the end. His mother was unhappy because his brother was already serving. Brenda’s father spent time in Egypt, repairing airplane engines. Both men survived.

After the war his brother opened an electrical appliance shop in Lincolnshire, where they were from. Brenda’s father worked there for a while before returning to being a farm mechanic. The shop, amazingly, still exists, with the Manders name on it.

Brenda has an older brother and one six years younger. When she was young they lived on farms in “tied cottages”–houses that came with the job (and were taken away when a farm laborer’s contract expired or wasn’t renewed). Universal moving day on English farms is April 5, which was also Brenda’s father’s birthday. Brenda moved more than once on her father’s birthday. They moved a lot because, she said, he didn’t think he was paid enough for his skills.

Brenda’s mother entered “service” at 14, becoming a scullery maid and all-around chore-doer for a unelectrified manor house in Lincolnshire. “She could do nothing for herself until everything she had to do for the family was done,” Brenda said. One of the last chores of the day was shutting up the chicken coop.

She worked in service, making almost nothing (but getting room and board), for seven years. “This was considered a good situation,” Brenda said. When she got married she stopped.

Food rationing still existed when Brenda was an infant, but she doesn’t remember it. I asked her if she remembered hardship. Her mother made her clothing, but that wasn’t hardship. My own mother made some of my sister’s clothing, and my sister made some of her own clothing. Neither was hardship; it was learning and using women’s skills.

But Brenda did remember one thing.

After moving many times, her parents decided they wanted a house of their own. It would require saving money, of which they didn’t have much. Her parents got everyone together in a family council. Brenda’s younger brother was an infant; Brenda was around six and her other brother was older.

“We’re going to save money this year to buy a house,” her father said. “We won’t be able to increase the amount of money we give you children. We’re going to have to economize.”

“I asked my father what ‘economize’ meant. He said: ‘It means that if you have a piece of toast, you can have either margarine or marmalade on it, but not both’.”

At the time, Brenda and her older brother got eight pence a week as an allowance. “It was enough for a few sweets,” she said. These were “old pence”–before English money went on a decimal system. There were 12 pence to a shilling, 20 shillings to a pound.

In one year, her parents saved 100 pounds, enough for a down-payment on a 900-pound post-war terrace house. It had two floors. The downstairs had a parlor (where all the good furniture was and which was used only on special occasions); a living room; and a kitchen. Upstairs were three bedrooms.

The house had cold running water, but no indoor bathroom. There was an outhouse in the back. A few years after they moved in, Brenda’s parents got a small second mortgage to have an indoor bathroom built. They lived there for 35 years before moving.

Brenda left school at 16. “My father didn’t think it was a good idea for me to stay in school if I didn’t know what I would do with it. Of course, parents don’t think that way now. They want all the education they can get for their children.”

My own mother would have sympathized. Her father didn’t consider college necessary (even though both of his sisters had gone to college). So she went to secretarial school.

Brenda went to work. She eventually decided she wanted to become an accountant. One of her employers allowed her to go to school one day a week. The rest of the courses she took at night and by correspondence.

Brenda is not married. She has no children. She saved early. The only money she ever borrowed was for a mortgage.

She has experienced three “redundancies,” which is the euphemism for layoffs. She has always liked walking and camping. After one layoff, she walked the Pennine Way in England. After the last one, she took a break and then couldn’t face the prospect of going back to work full-time. So she didn’t. Now, she takes contract work. She’s squeaking by, and has some pensions to look forward to.

Unfortunately, I don’t have an up-close picture of Brenda. Only this one, when I stopped to explore an abandoned farm and she walked on. 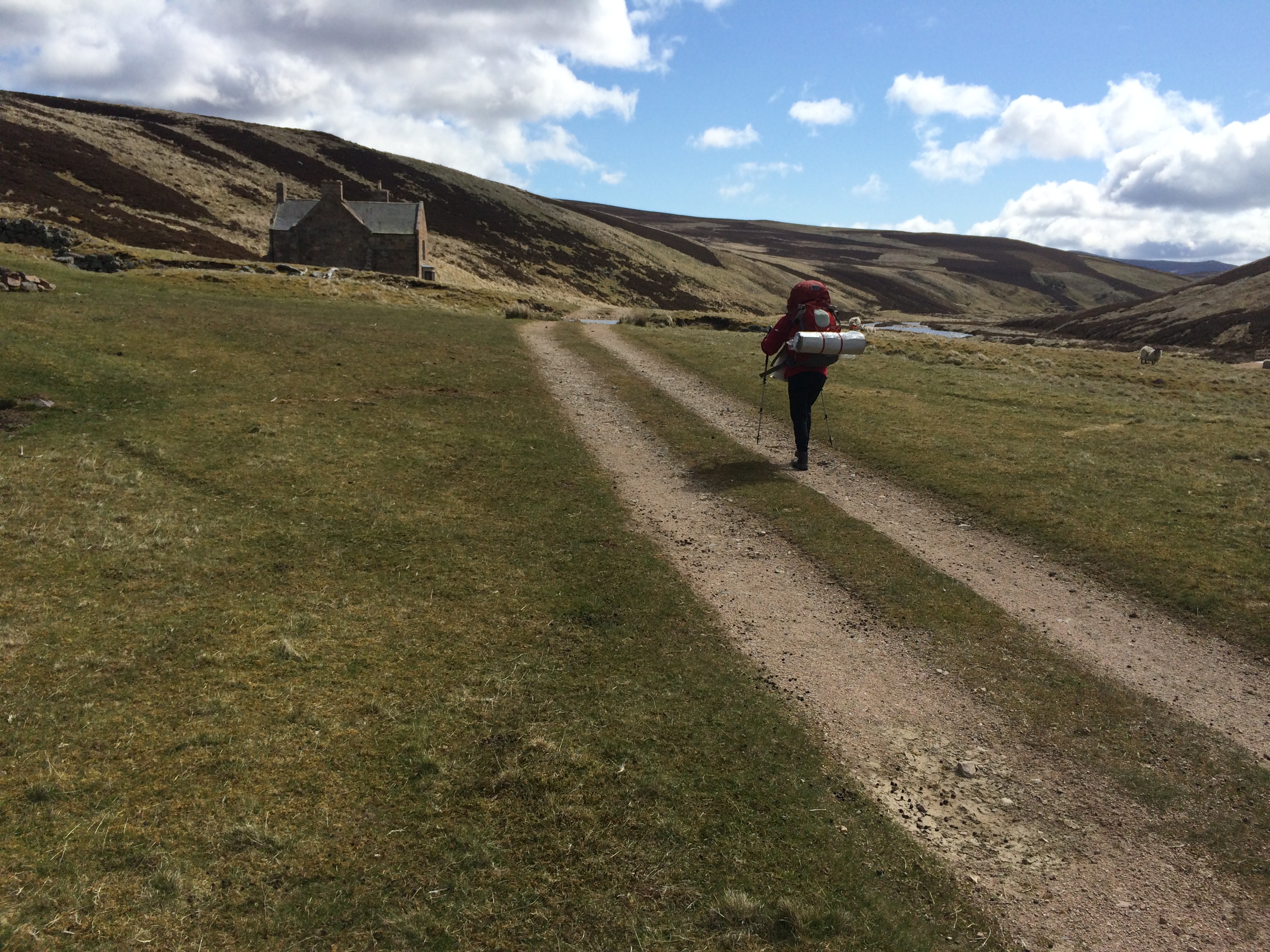 Postscript:  I saw Brenda at the post-Challenge dinner and took a picture of her.  Here she is: 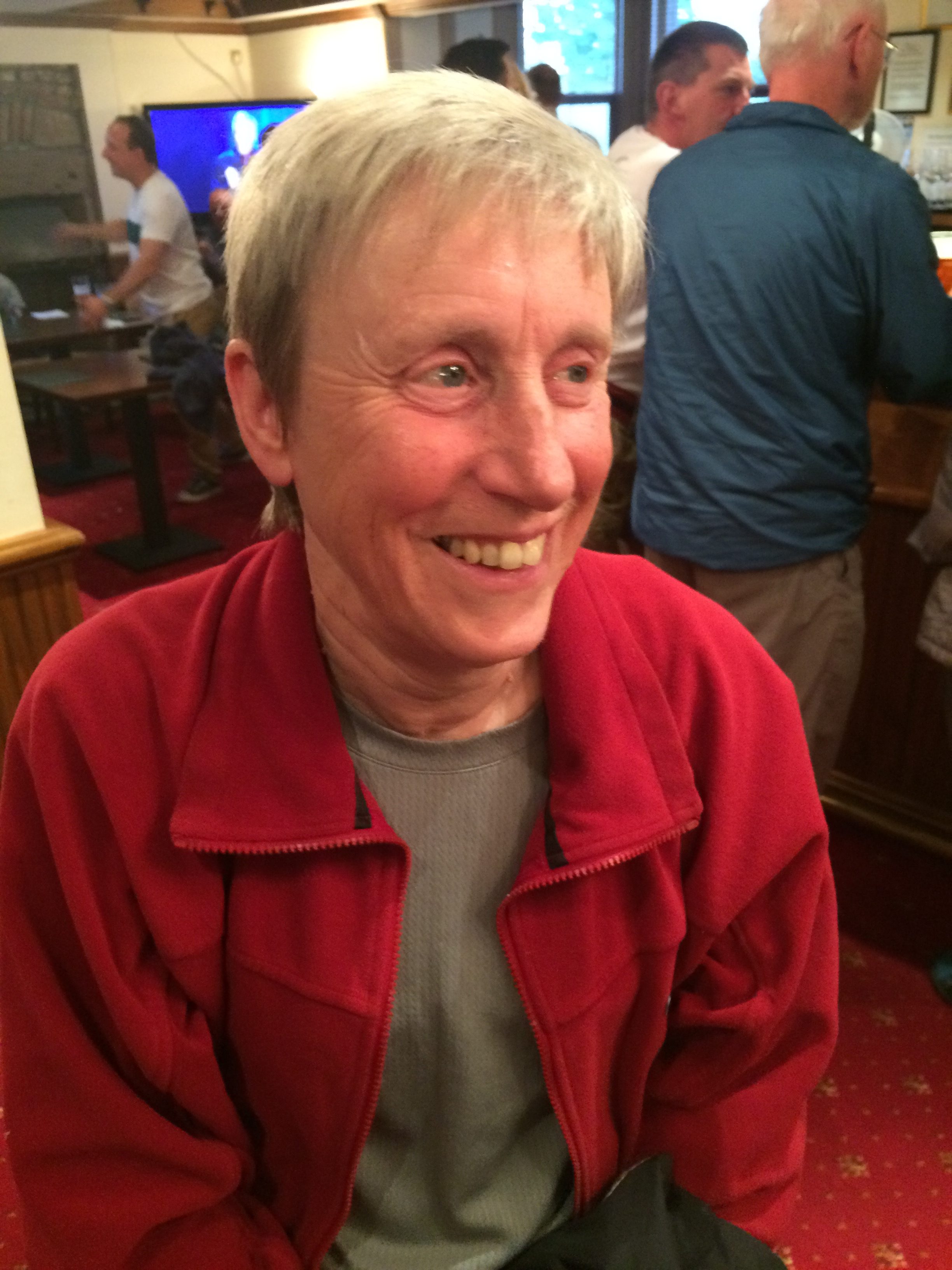