There was more navigation to do on the third day, and more up and over.

It didn’t require navigation–at least not assisted navigation–and it didn’t require GPS. As Roger Hoyle, my advisor in all things Challenging, said, all it required was “going over the watershed” between two obvious hills. They happen to be called Meallan Odhar and An Soutar, a climb of a little more than a thousand feet. It doesn’t look like much from here. (In the distance on the left you can see a bridge over the river I’d spent such effort to stay on the correct side of.) 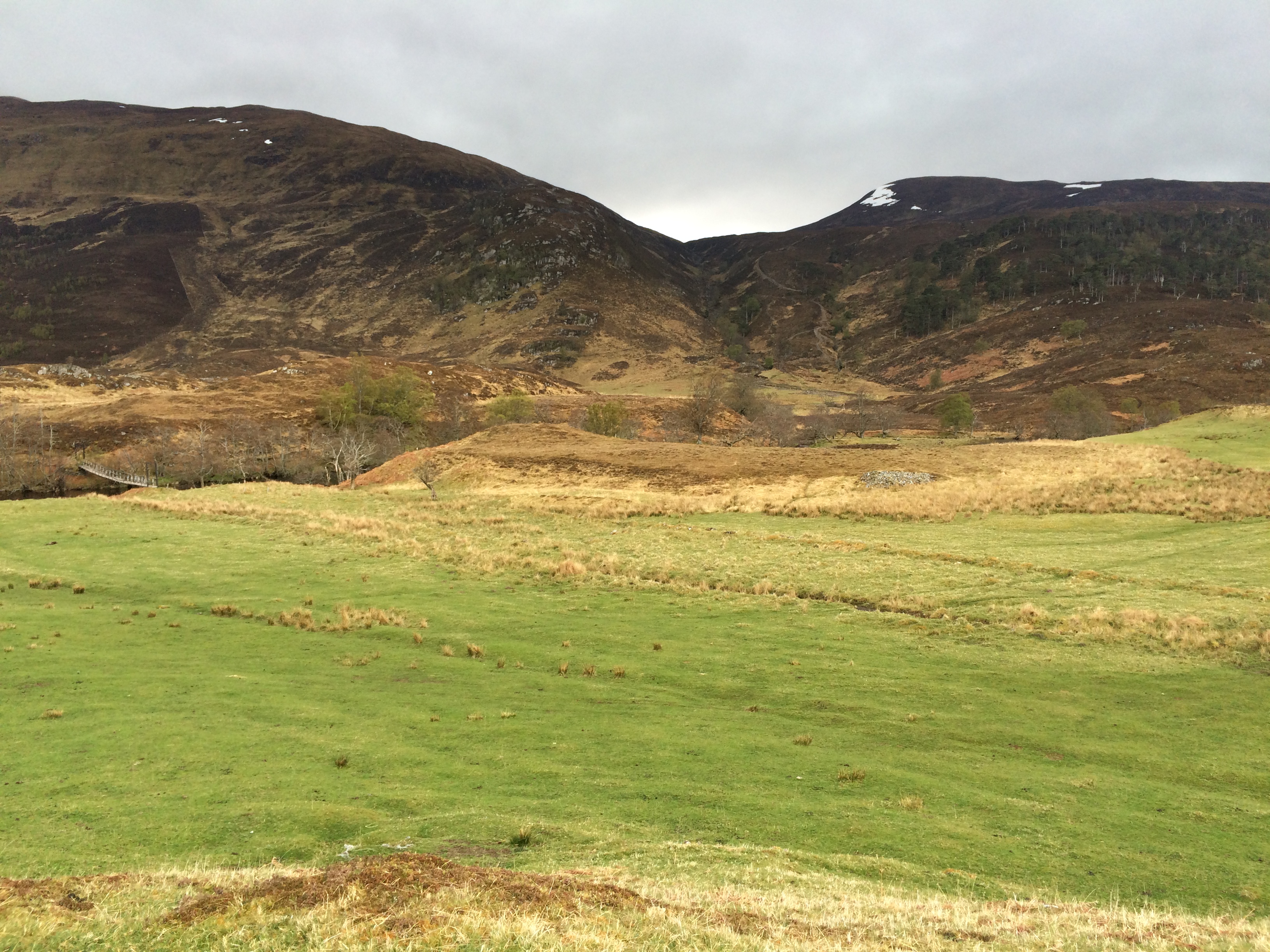 Here it is up close. 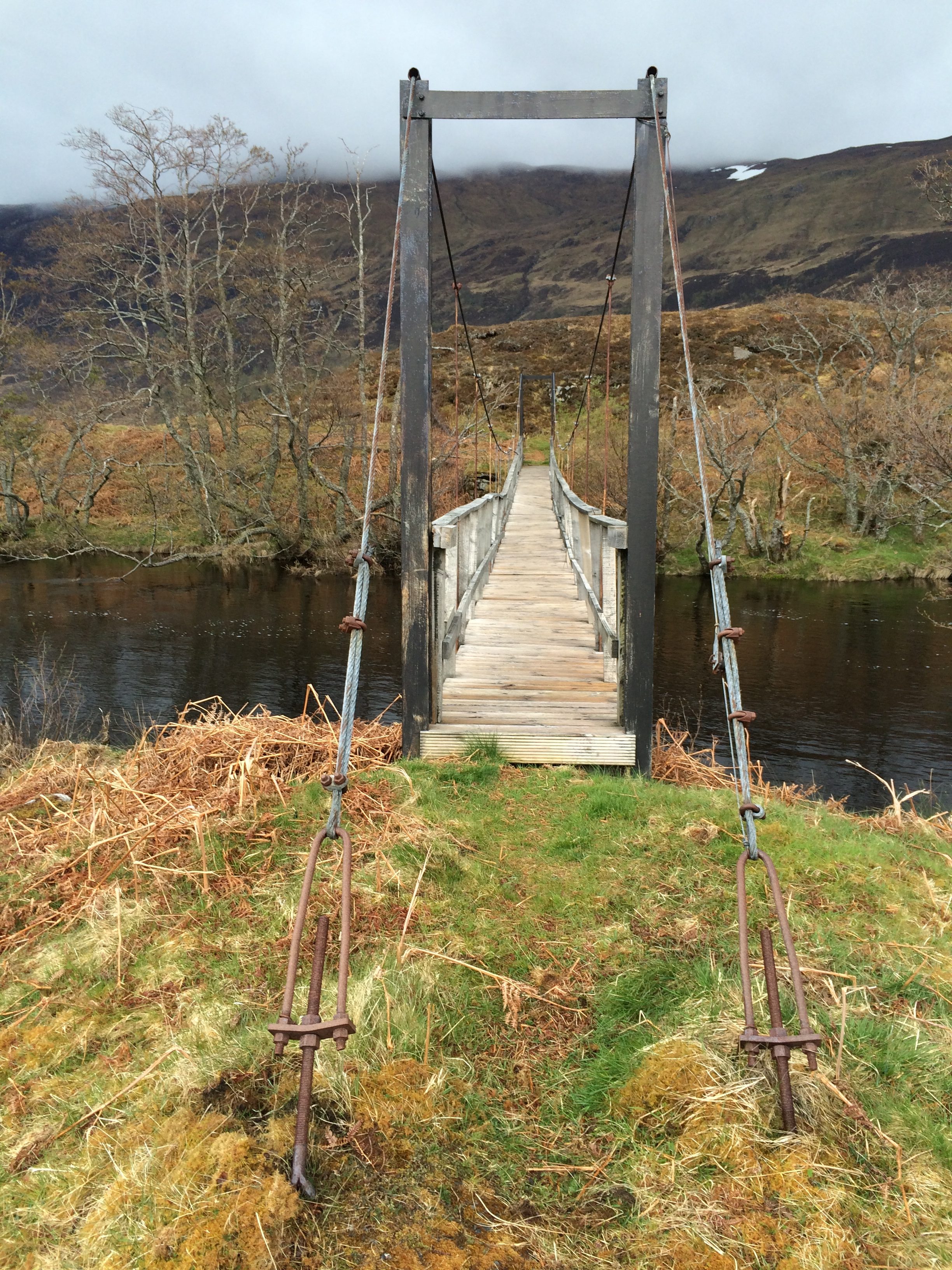 The stream whose watershed I was going up was quite pretty. It demonstrated the fact that almost every surface of the Highlands is a watercourse, given the right circumstances. 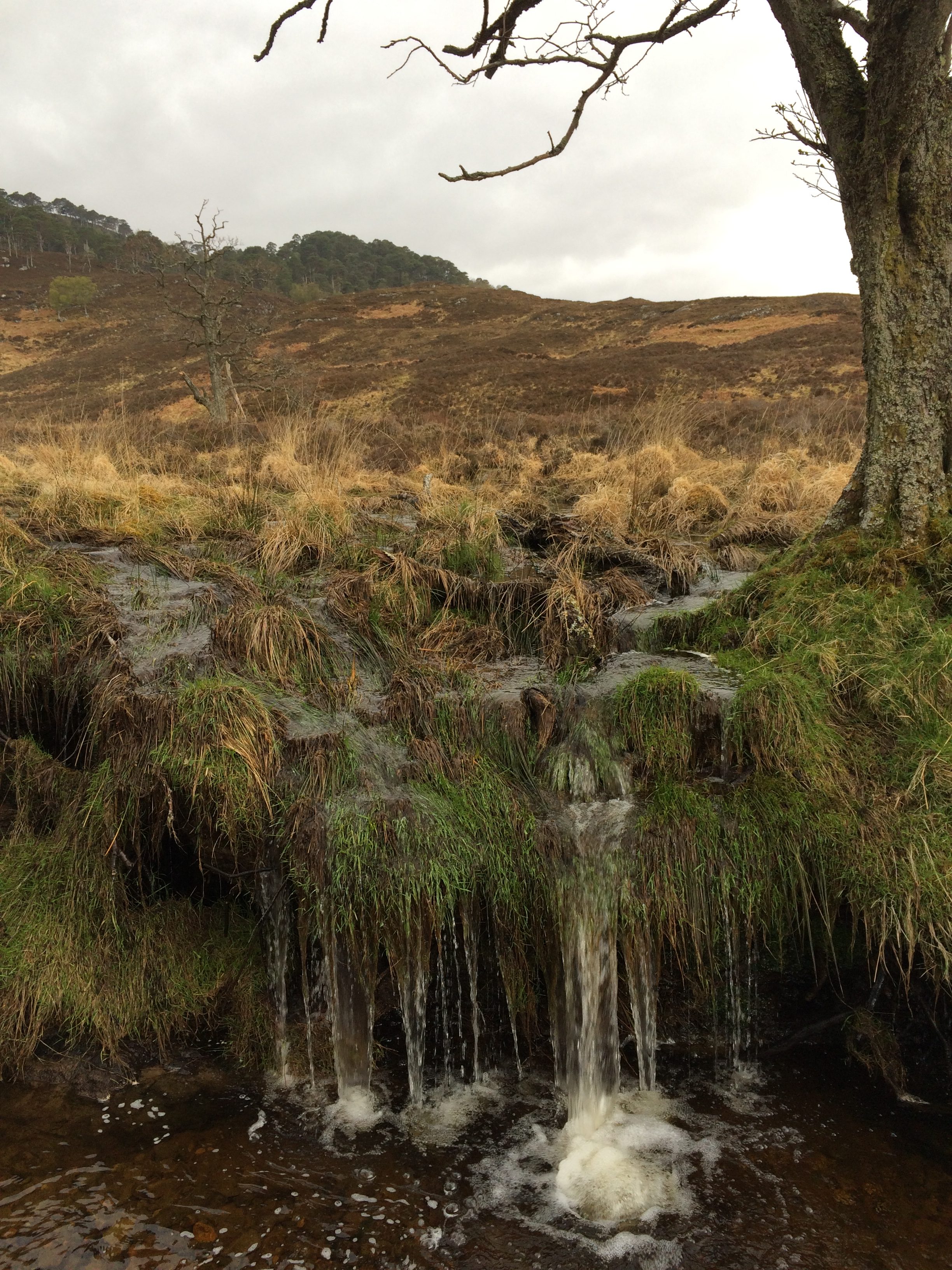 It was tough climbing. I did not go along the stream bank, which may have been a mistake. Although there was no trail on the map, there was a clear one going up the east side of the watershed, which is where I wanted to be. 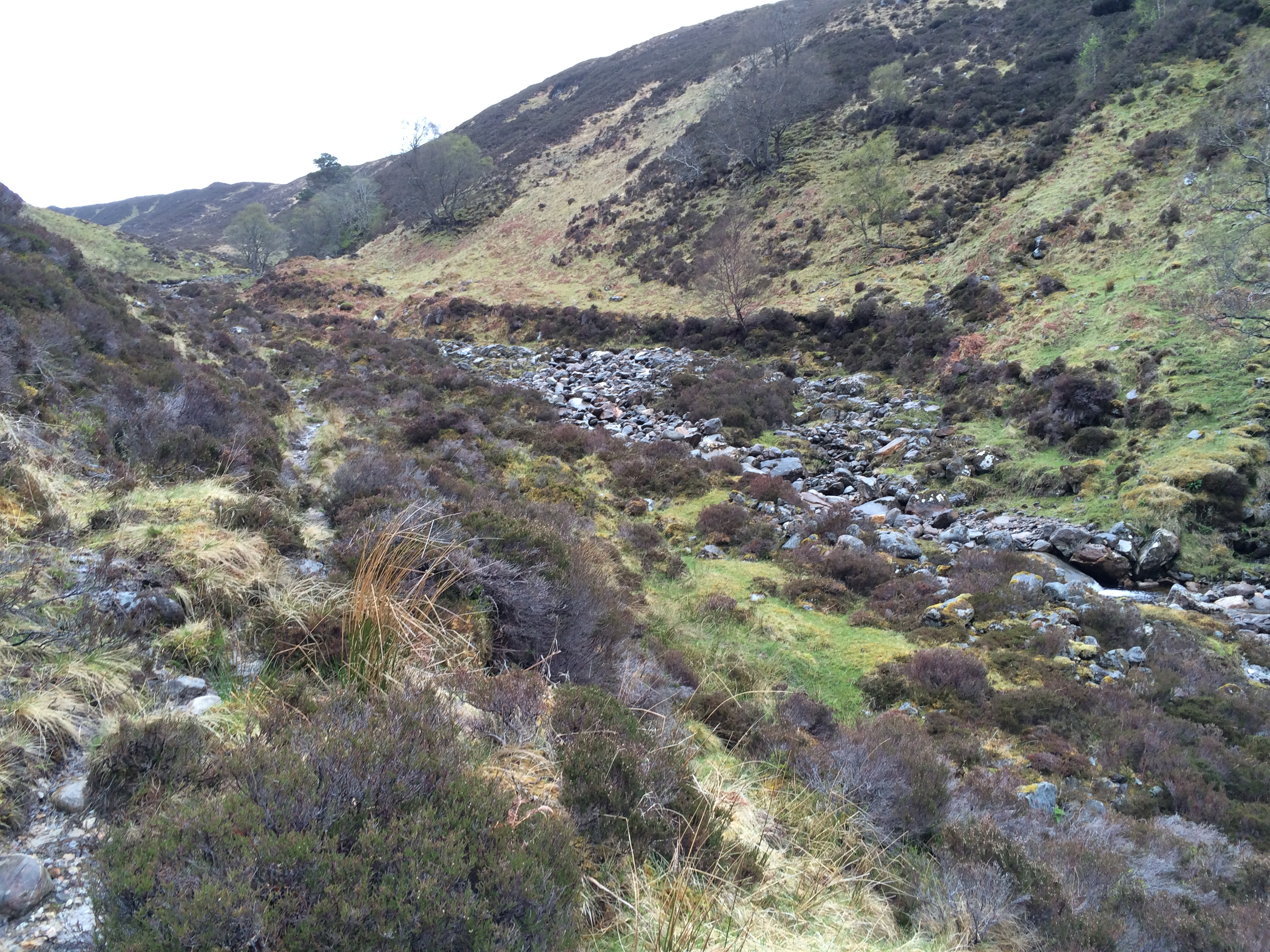 As is so often the case, the big question was what to wear. Or rather, what to wear for the next 20 minutes. The variables were exertion and weather. It often rained once or twice over the course of a few hours. And of course one can warm up considerably walking uphill with 40 pounds on your back.

After a while I took off the fleece vest under my pullover rain jacket, and then, when it stopped raining, the jacket. These changes require taking the pack off, undoing three buckles and one draw cord, stowing or unstowing, closing up, and then heaving the pack back on, which makes it feel heavier than it is.

I was in a zip-front running shirt when I saw a rock cairn along the path I was following. The path looked to be an animal trail–which is to say, made by deer–but the cairn made me think it had been approved by human beings, too. Why that was reassuring is unclear in hindsight (so to speak).

Scotland has one poisonous snake, the adder.  I came around the corner and encountered one.  Like me, it was moving pretty slow. 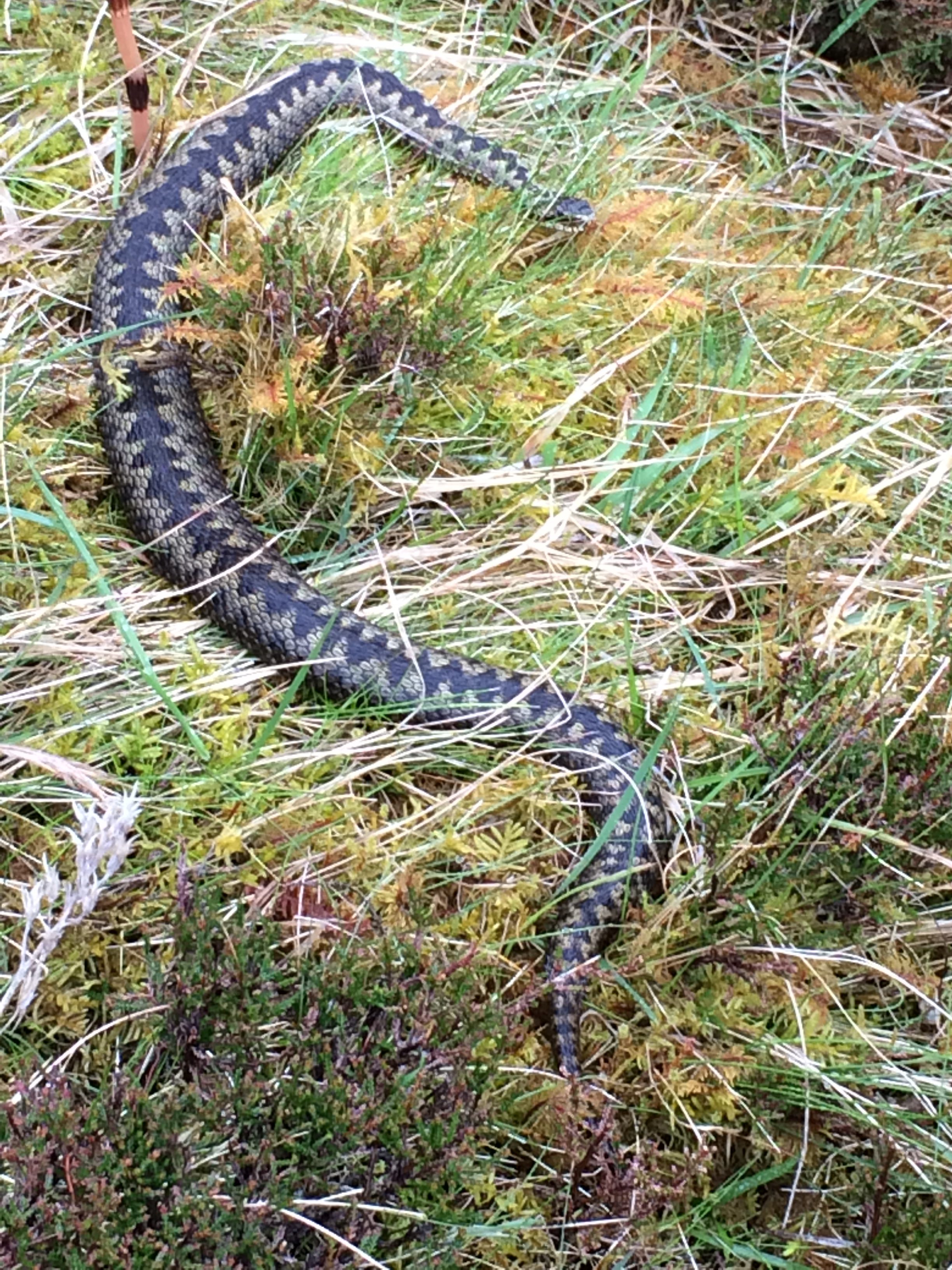 The path took me slowly up the shoulder of the left, or eastern, slope. The ground was the usual mix of heather and bog. Hard to think that bog plants can flourish on a 10-percent grade, but they can.

It occurred to me that this trail might be headed to the top of the left-hand hill, a route made by someone wanting to bag an undistinguished summit. As the trail got farther and farther away from the stream, morbid fantasies came to mind. If it got too far away–and it was cooling down and had started to rain again–I thought I might want to get back to the stream. That would require going down the sand-and-rock ravines that periodically appeared, or going over the steep and occasionally precipitous heather. What would happen if I fell and twisted an ankle? How about a compound fracture? Could I set up a tent, crawl in and wait for rescue? But I had no water because I operate on the assumption that because there is water every 300 yards in Scotland, there’s no need to carry it. How much oxycodone did I have?

So I trudged and trudged, reading the ground as best I could as the air got mistier and cold. There were numerous animal paths and I took the downward ones at every chance, eventually coming back to the stream near the col. By then it was so small you could cross it with a dance step.

When I got to the top, the stream disappeared. The view was foggy in the direction of where I’d come and where I wanted to go. The only clear view was of the hills on either side–exactly where I didn’t want to go. 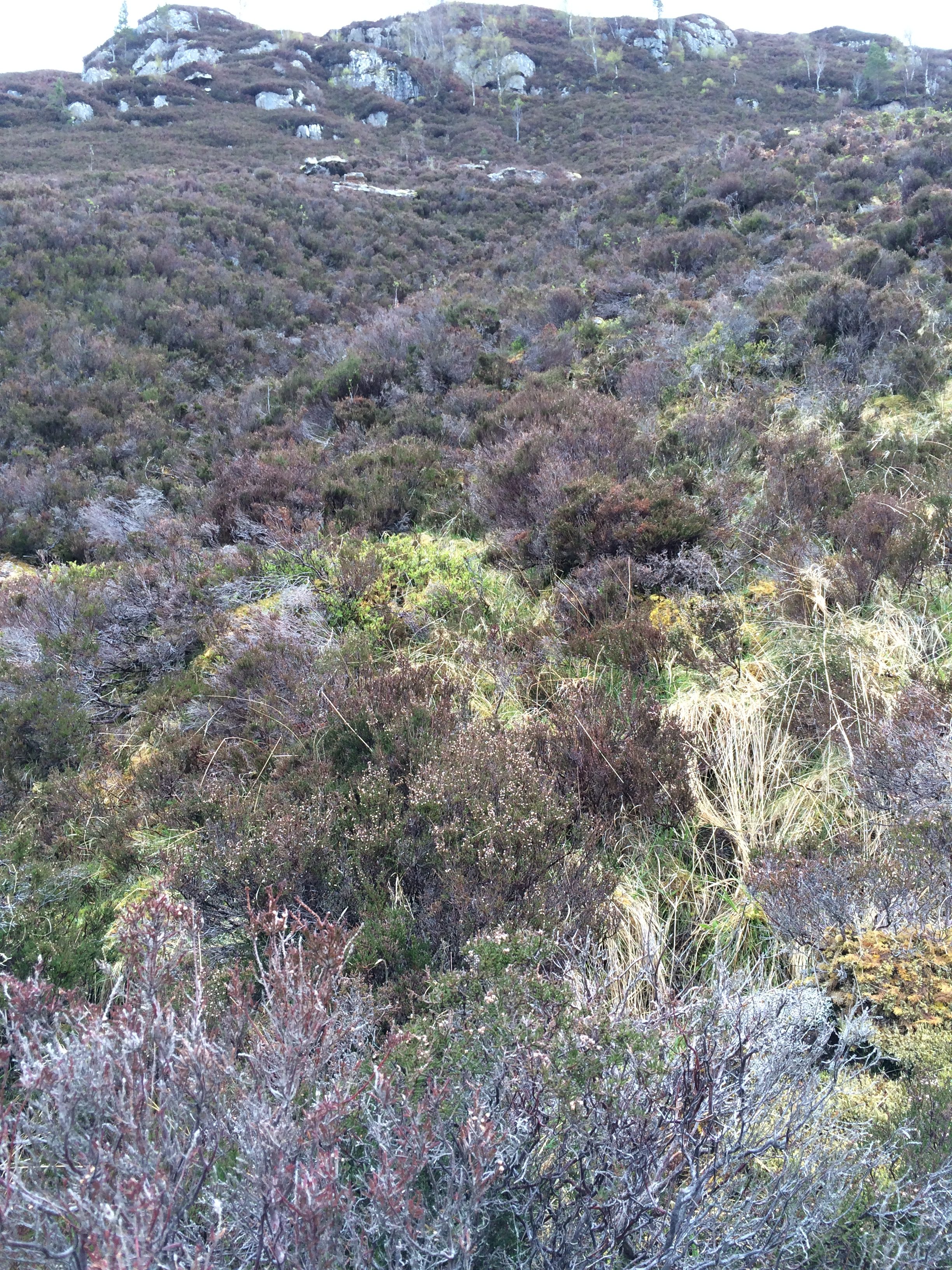 Here, where the water didn’t know which way it wanted to go, episodic runoff had carved a mini-Canyonlands in the peat. The mostly dry channels were, in fact, a kind of peat quicksand. Want to be a 21st-Century Bog Man, and have the contents of your pockets displayed in National Geographic in 1200 years? Step here.

The carved walls and overhanging moss are known as “peat hags.” Well named, I think. 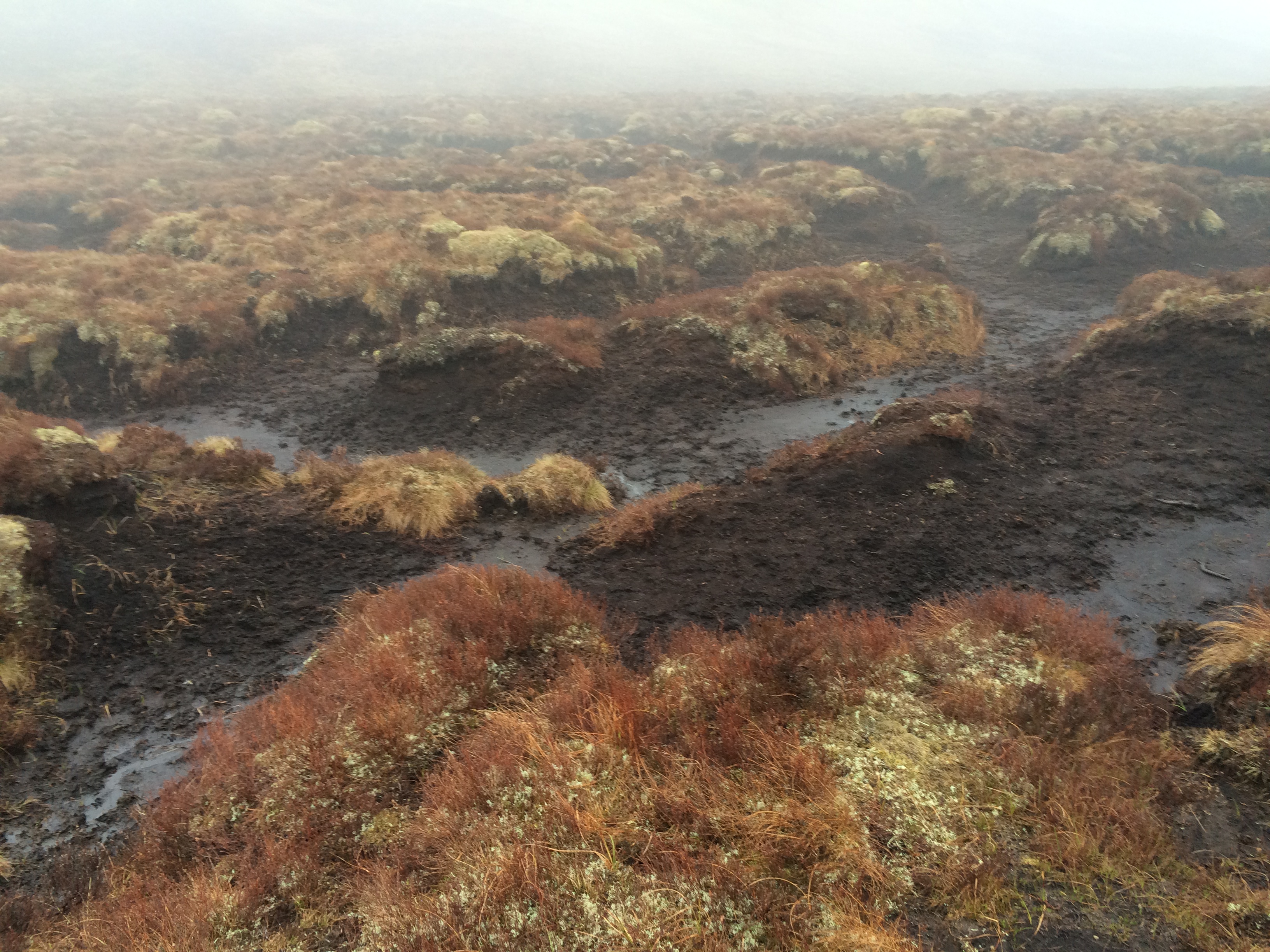 I got down in one of the cuts out of the wind and put on warm clothes, including mittens. As I went on, negotiating the least difficult route in a downhill direction, I became aware of a sound. It was water running. A rill had formed and was going down the other side of the watershed. I followed it.

It got bigger and the walking got easier. Eventually I got to a patch of woods. Not an ugly planting for pulpwood, but a Frodo-land of moss-covered rocks and gnarled pines. I took off my pack and had a snack. 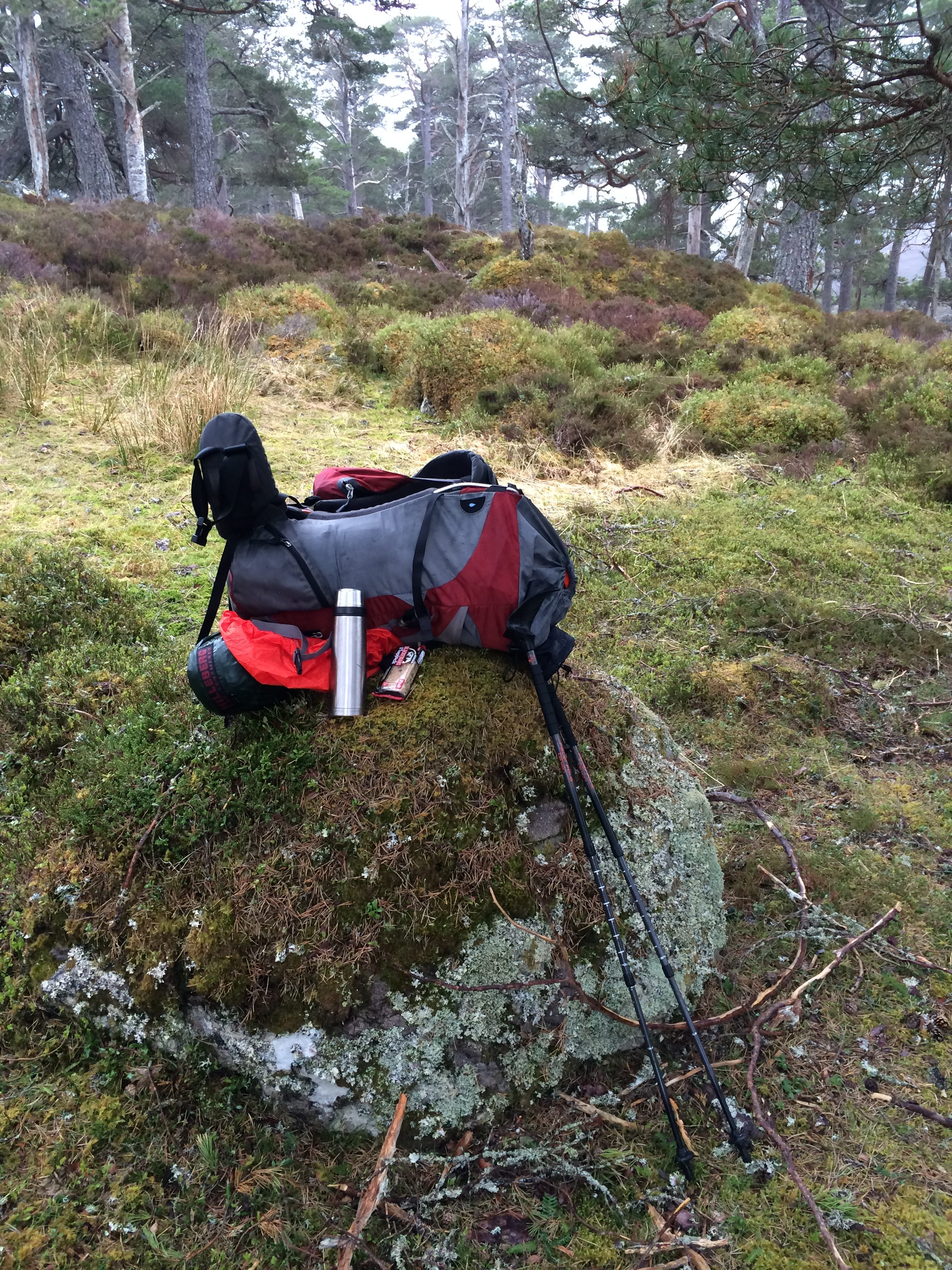 As I walked through the woods, I once again was glad that the deer knew where they were going. 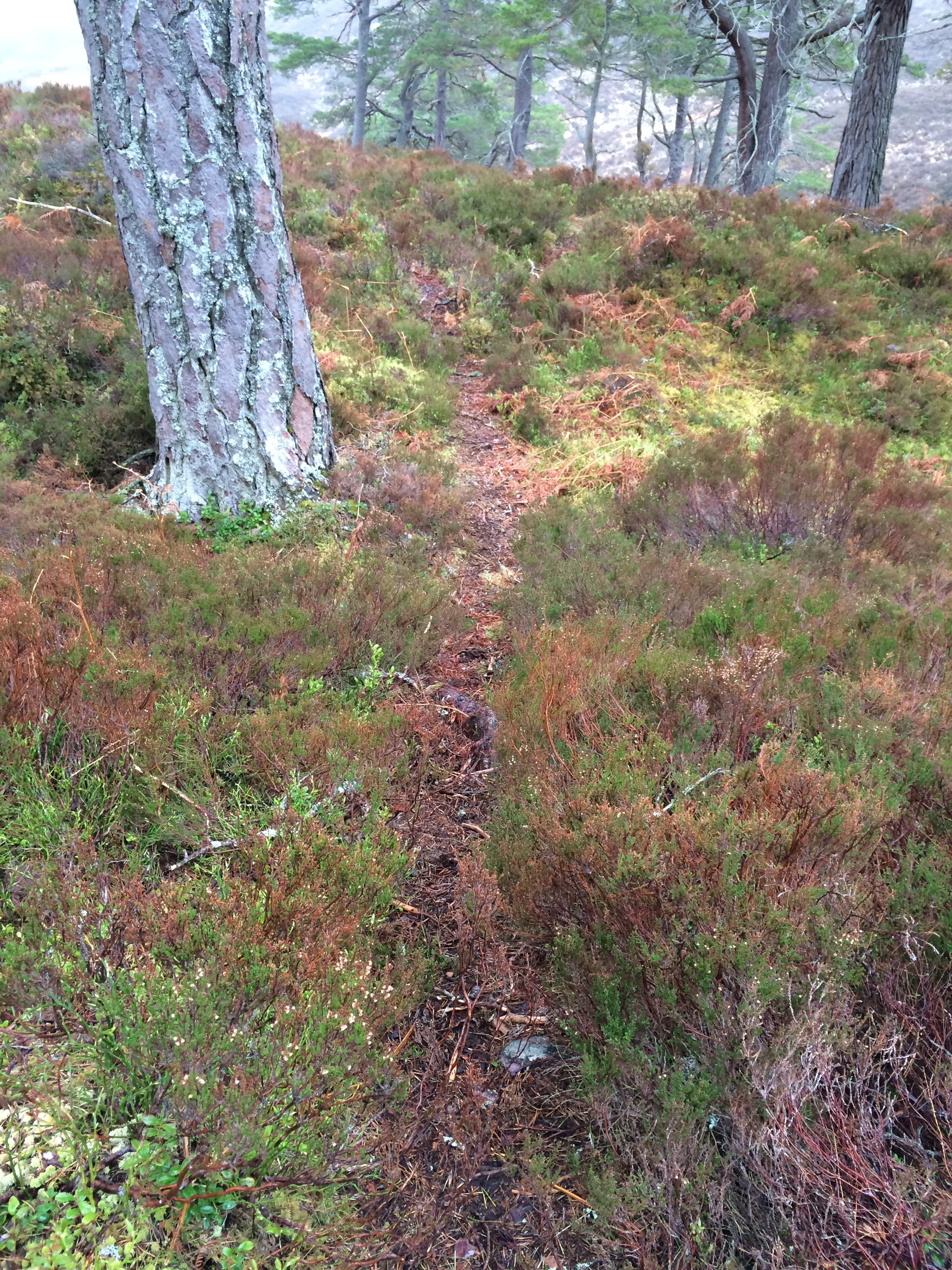 And then something strange happened. Have I told you about my iPod problem?

Last year I didn’t bring an iPod and I became quite tired of my company. This year I brought one and had a great time listening to Arty Hill sing about a “12-pack Morning” and “Me and My Glass Jaw,” and to marvel for the thousandth time at Joan Baez’s rendering of Dylan’s songs in “Any Day Now.” And then it stopped working.

I’ve also had a livelier than normal repertoire of random pocket activations on my iPhone, which holds the map, my route and GPS location on it. I take the phone out frequently to check where I am, and to take pictures. Often when it out it tells me that, sorry, I can’t connect to the App Store because there is not internet connection. Timer is done, do I want to turn it off? How about Undo Typing?

So I’m walking along and I hear the faint plucking of a guitar.  And then some other instruments.

On the first day as I walked up the hills out of Strathcarron I heard a thunderous sound. I turned around and saw a military jet flying up the valley, way below the hilltops. So I was ready for strange things. Was there some sort of loudspeaker in the woods? Blasting from an unseen building?

No, it was coming from my right front pocket. It was my tiny iTunes account playing one of a half-dozen songs I’ve bought. It was Brandi Carlile singing Leonard Cohen’s “Hallelujah” with the Seattle Symphony, a great version of an incomparable song.

I walked along as it played through my pants. A minute later I came out of the woods into a clearing and saw the river where I would pick up the trail that would take me to Cannich, where I would have a bed. 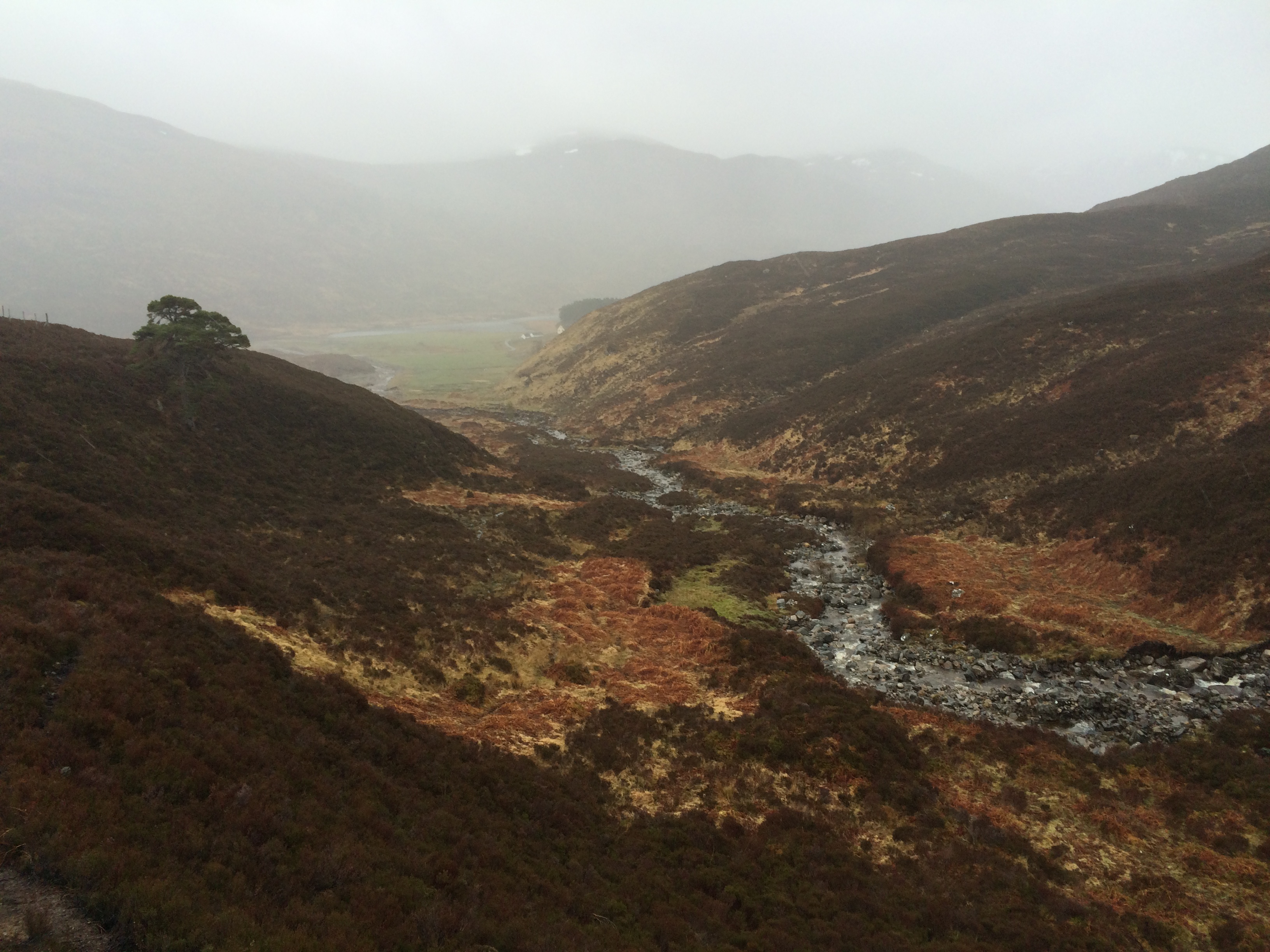 You may not believe me. But I tell you: this actually happened.