The  other day coming up from Cairn Poullachie over a watershed to Glen Mazeran I came across a stone building, obviously just finished or refurbished.  It was something right out of Dwell magazine.  It wasn’t on my map and I know nothing about it. 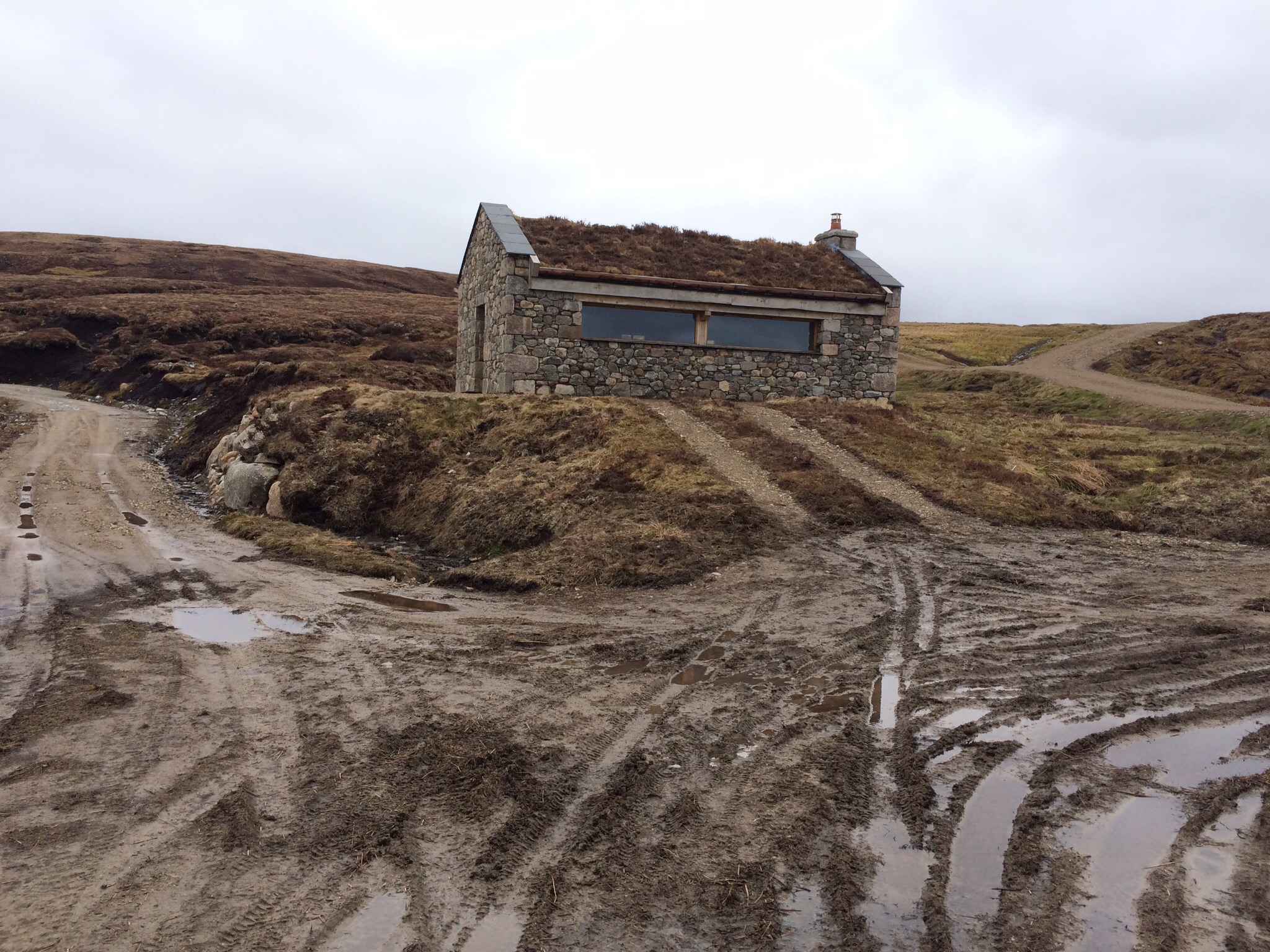 It had a turf roof and exquisite stonemasonry. 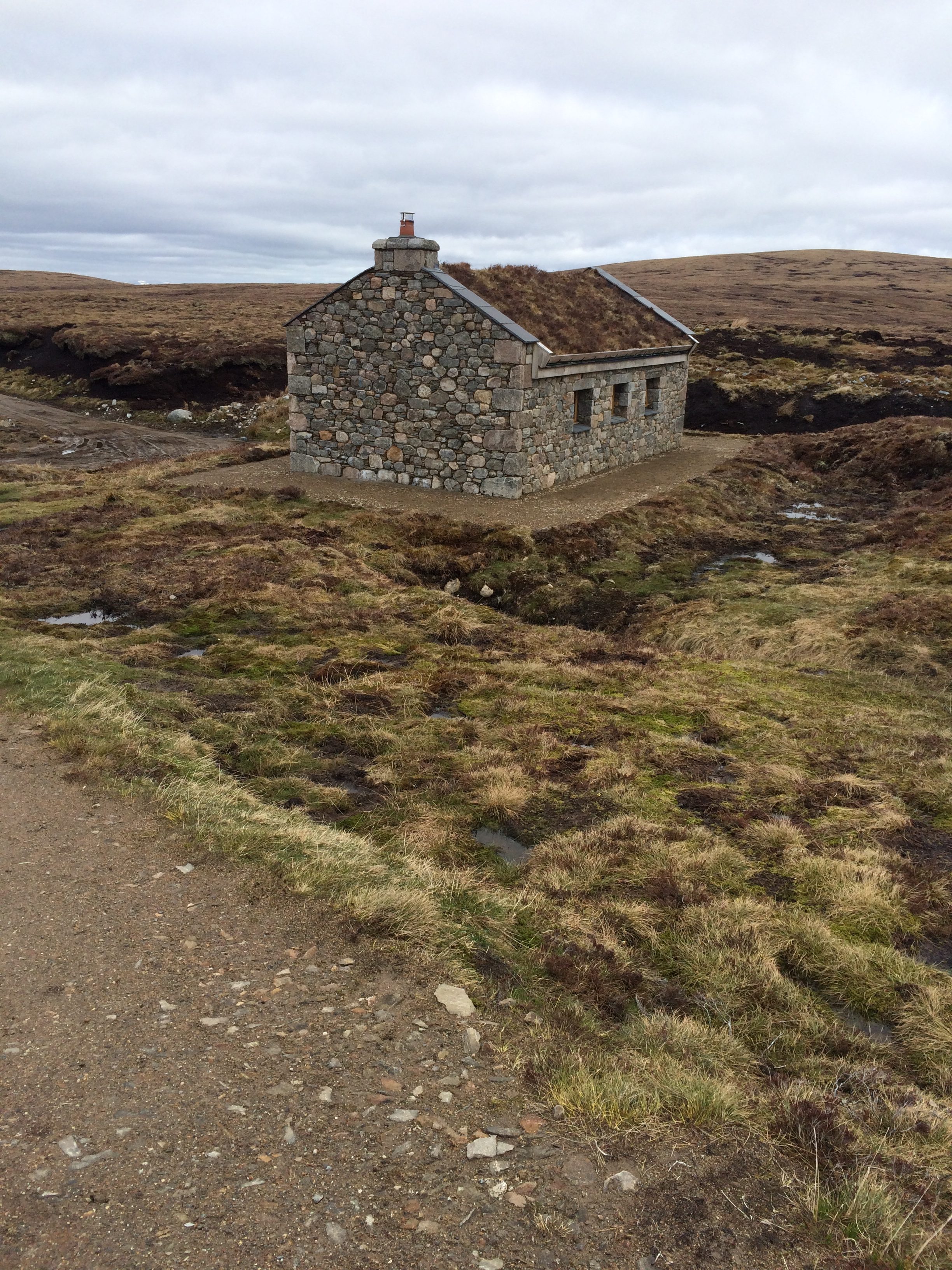 This is the exterior window. 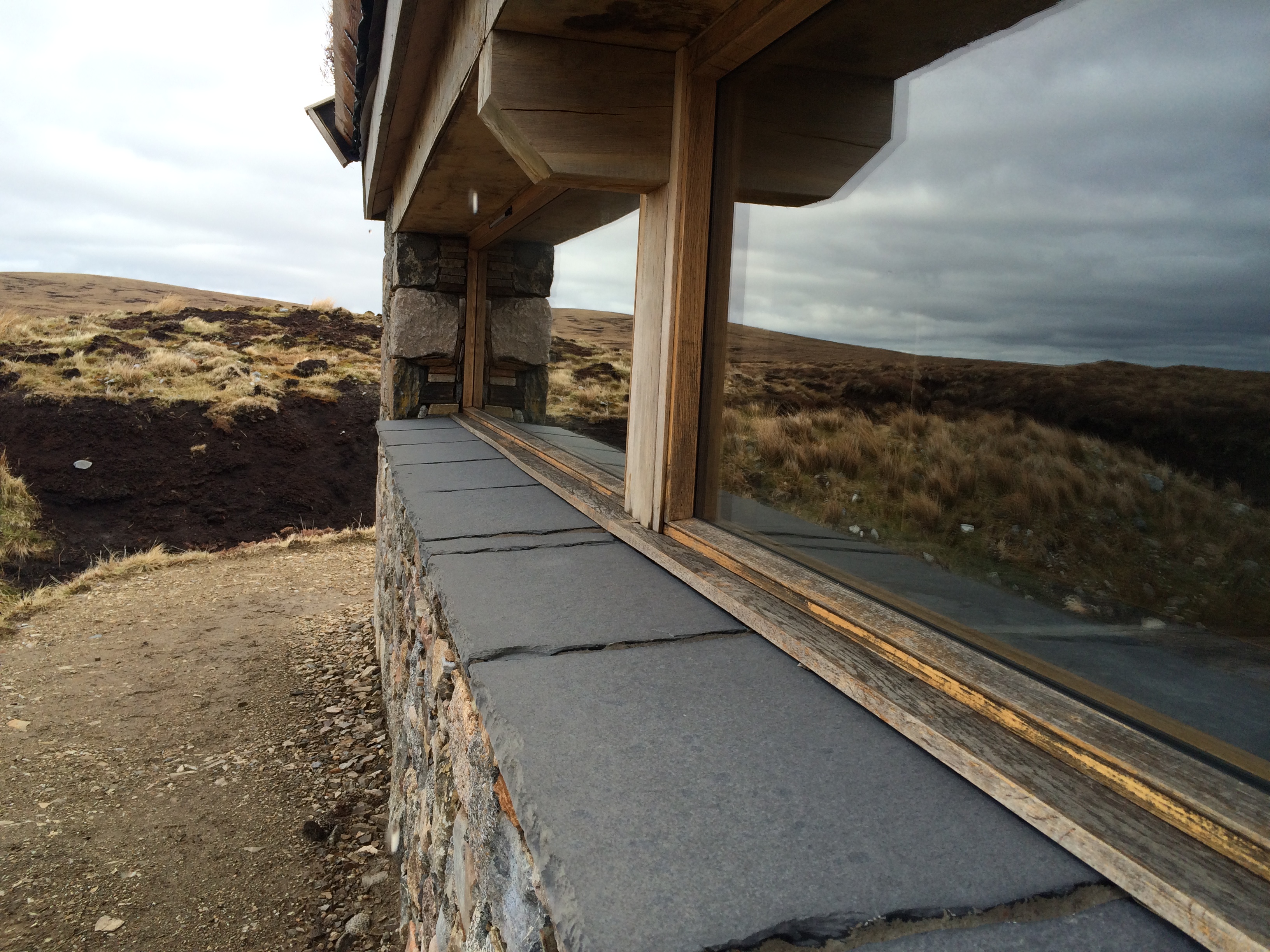 And this is the view from it. 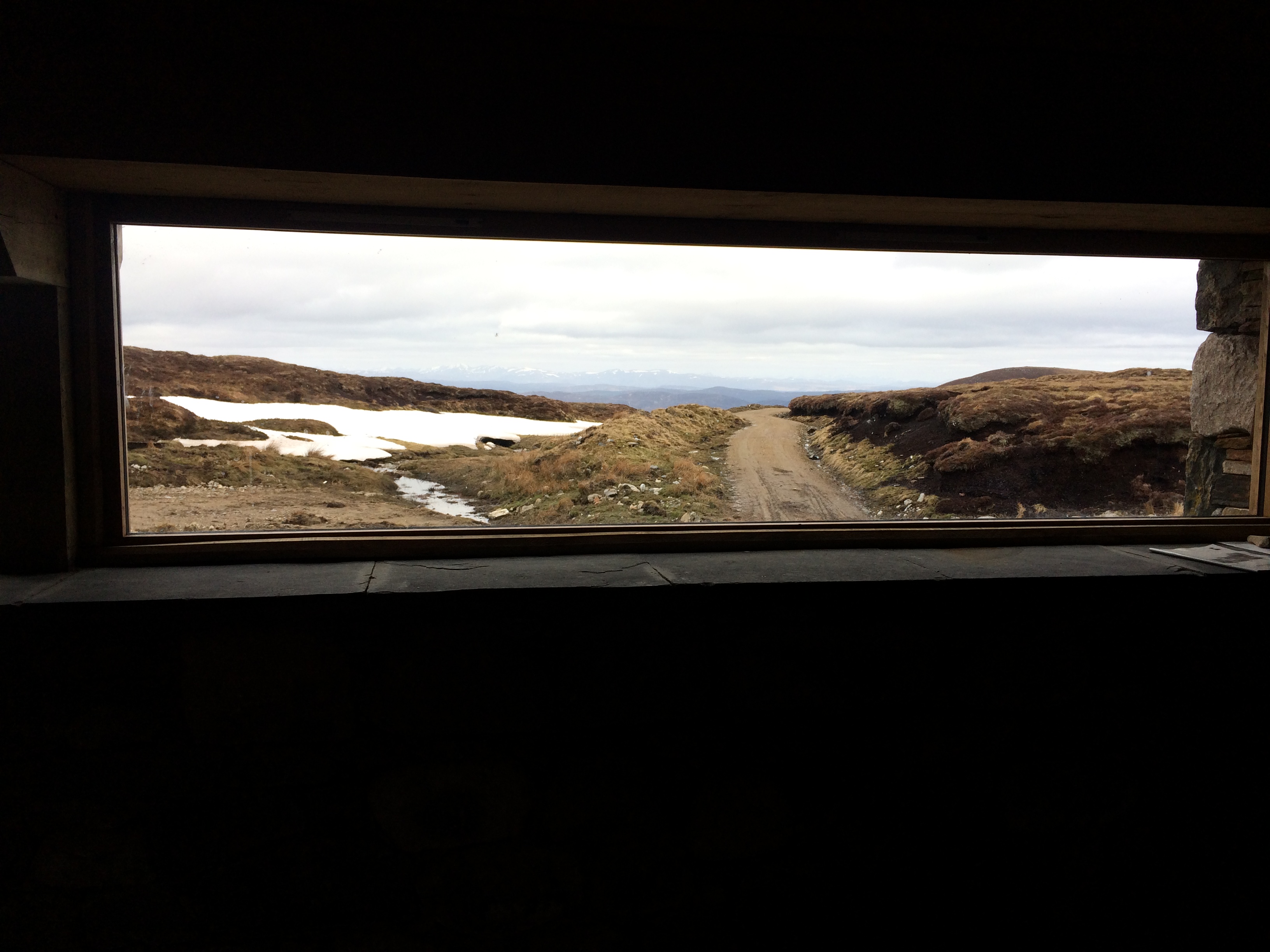 The road it was on also wasn’t on my map, whose last update was about five years ago.  There has been a lot of construction of gravel roads in the Highlands.  Some of it is to allow construction of windfarms and transmission lines.  Many, however, are built to give owners of the estates better access to remote country for hunting deer and grouse.  “Stalking” (as it’s called here) is now the major source of income for many estates.  Sheep and wool, the money-maker for more than 200 years, are now worth almost nothing.

This building is almost certainly built as a place where sports, paying thousands of pounds for a few days of guided stalking, can have a fancy lunch, brought up by workers from the estate. 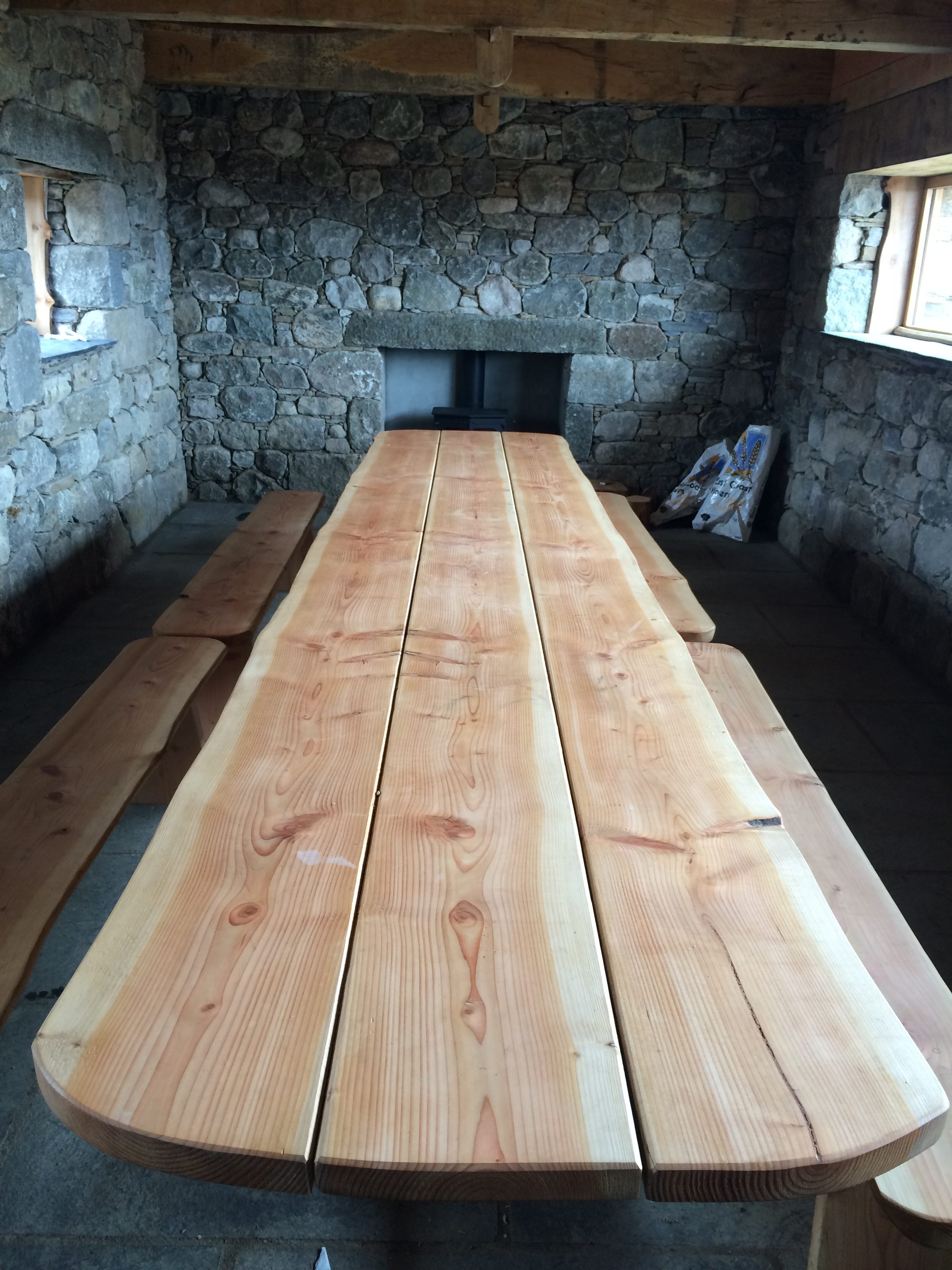 It smelled of pine sape and appeared not to have been used yet. 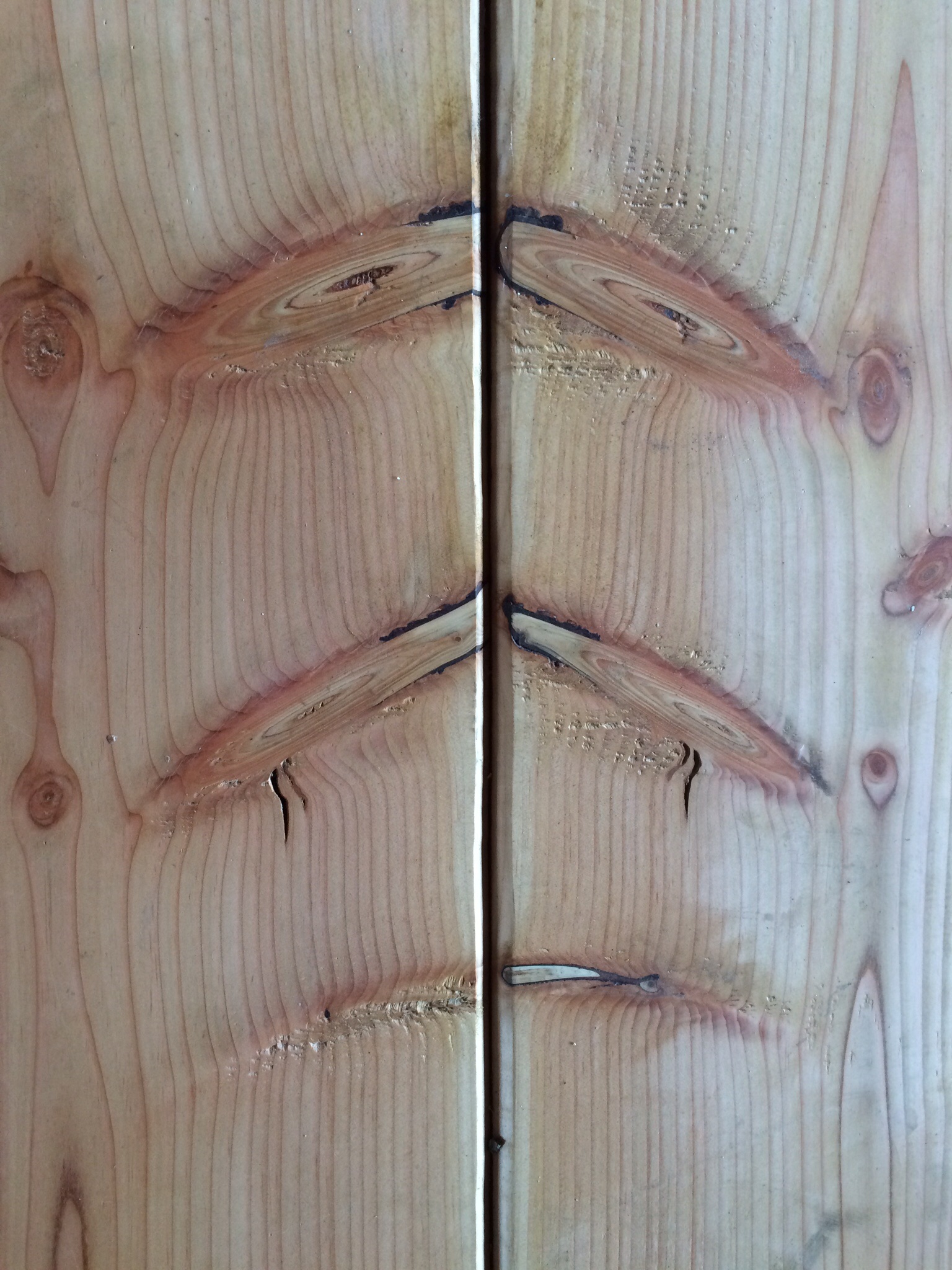 There were fancy interior details. 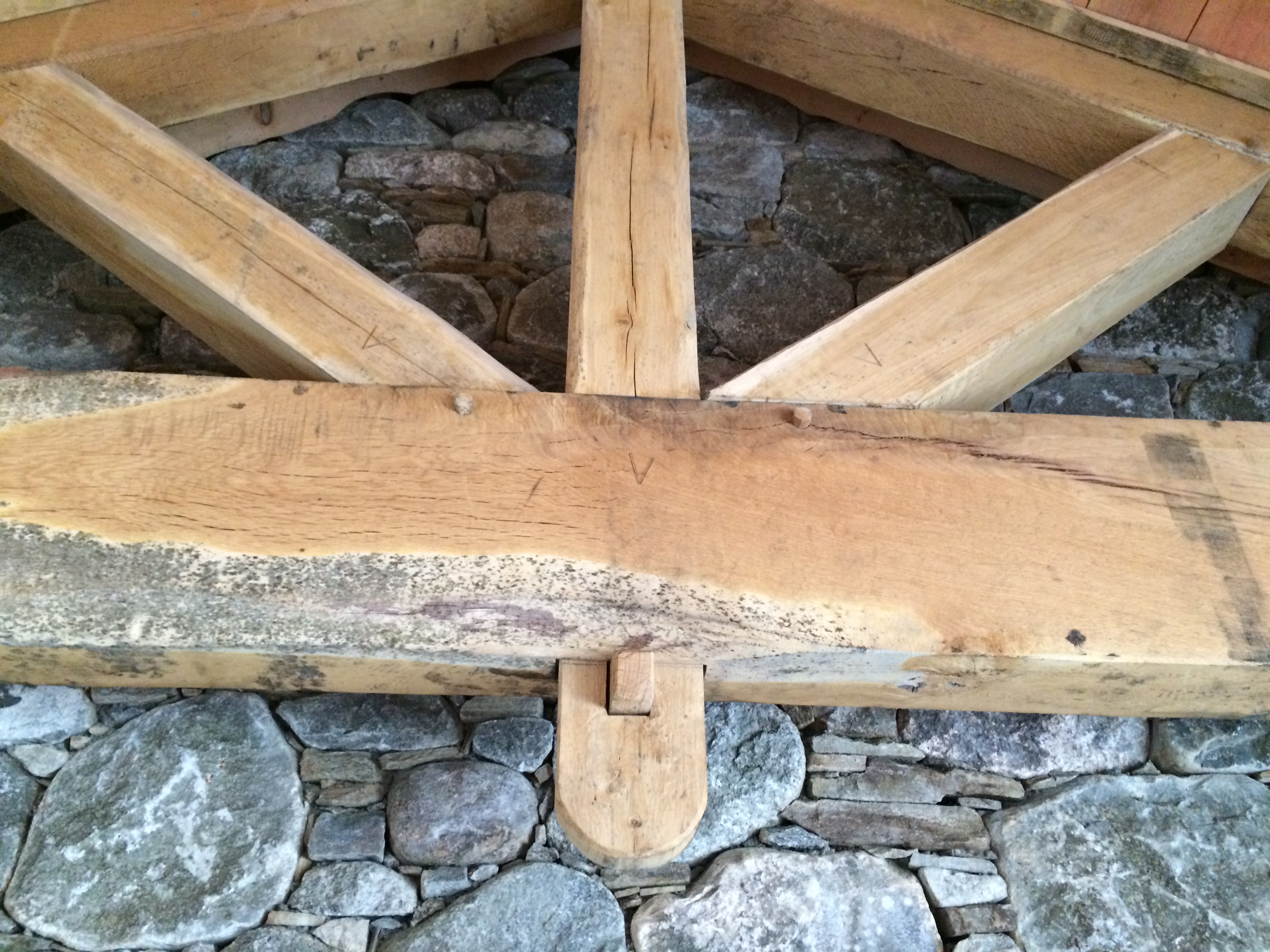 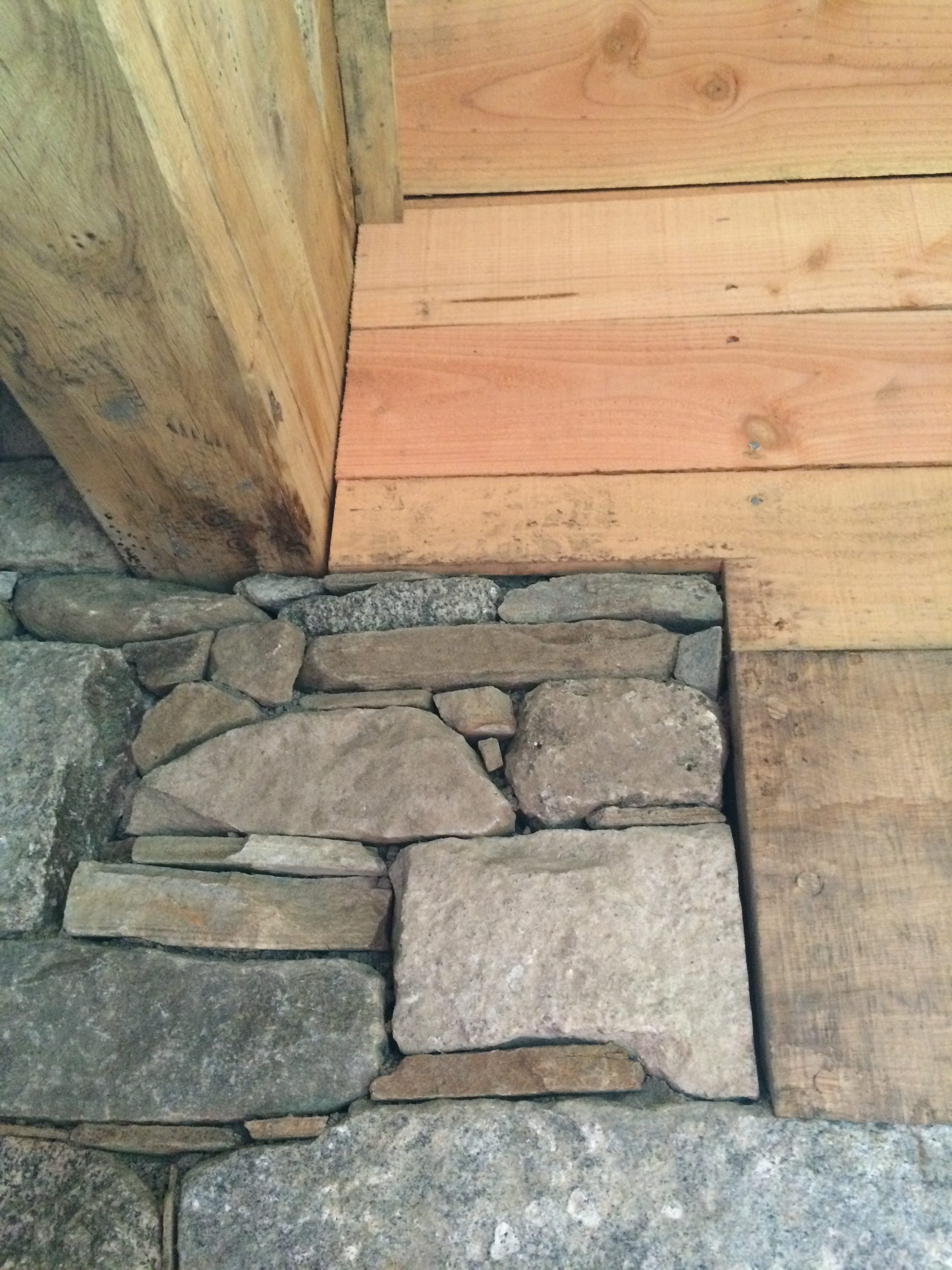 Polished wood framed the sides of the windows.  This piece included a burl. 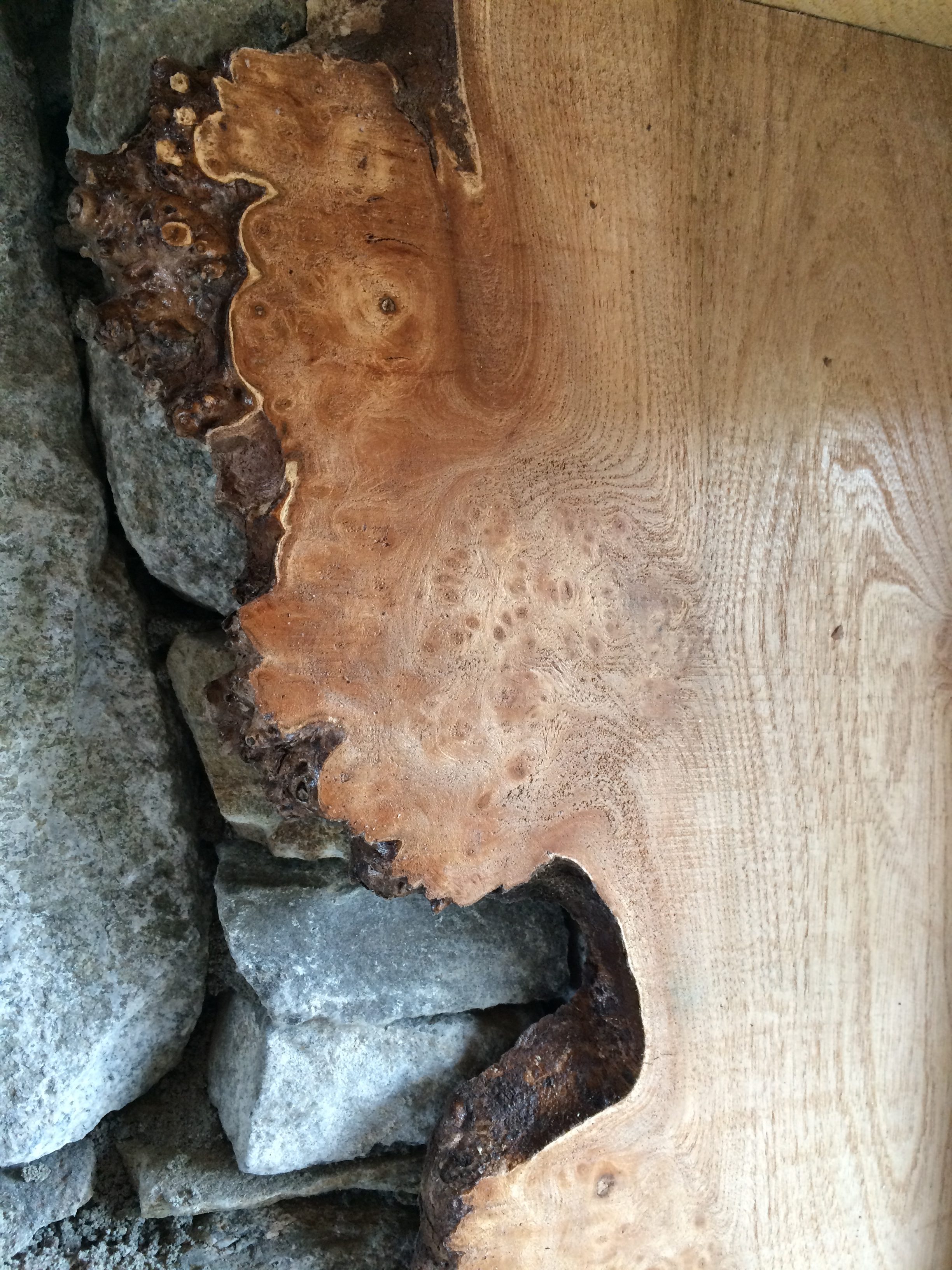 I brewed up some tea, set out the map and figured the bearing for a trail that was on the other side of the watershed.  The road didn’t go over the top. 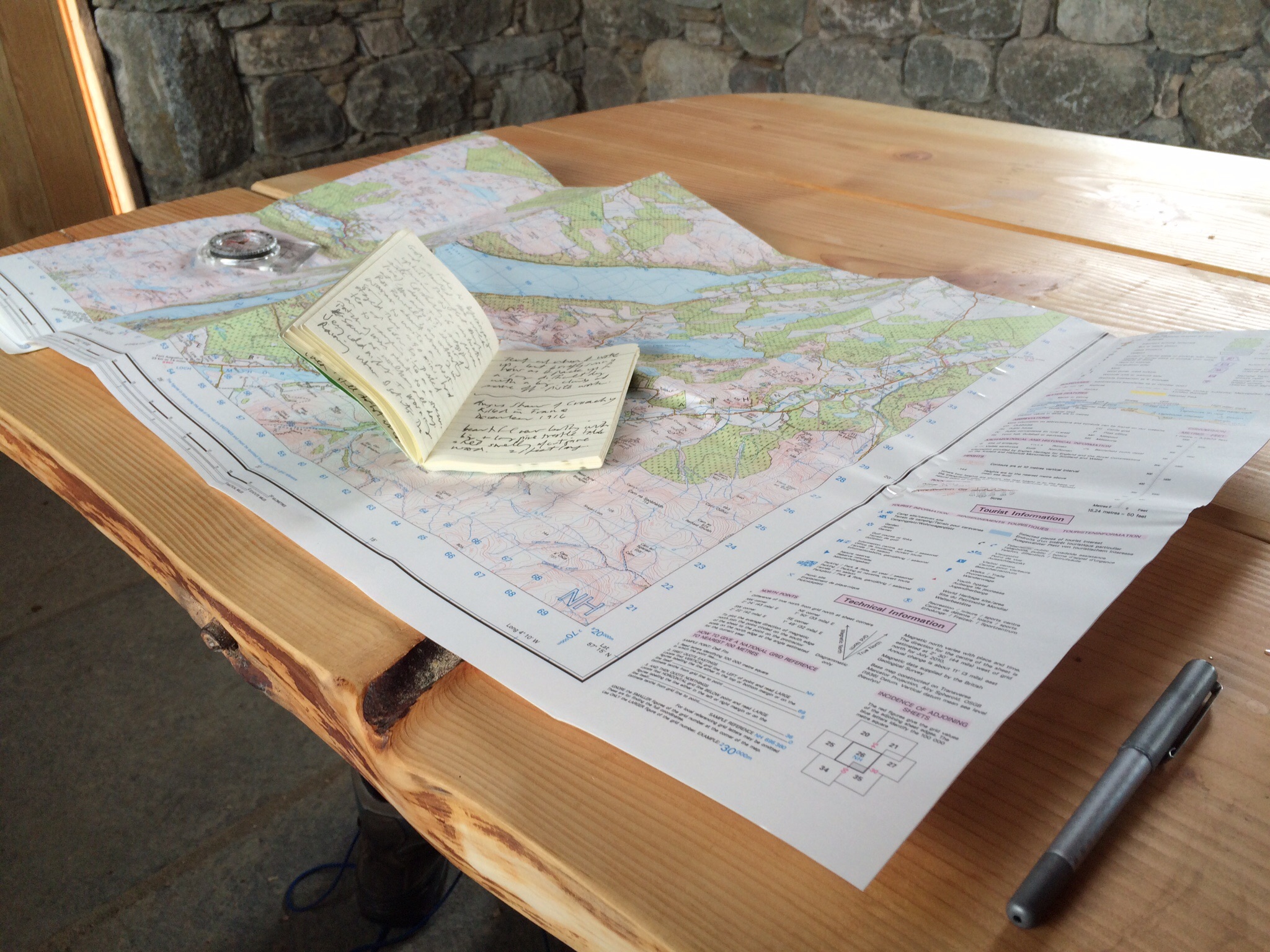 Outside, to the left of the door,  was this stone. 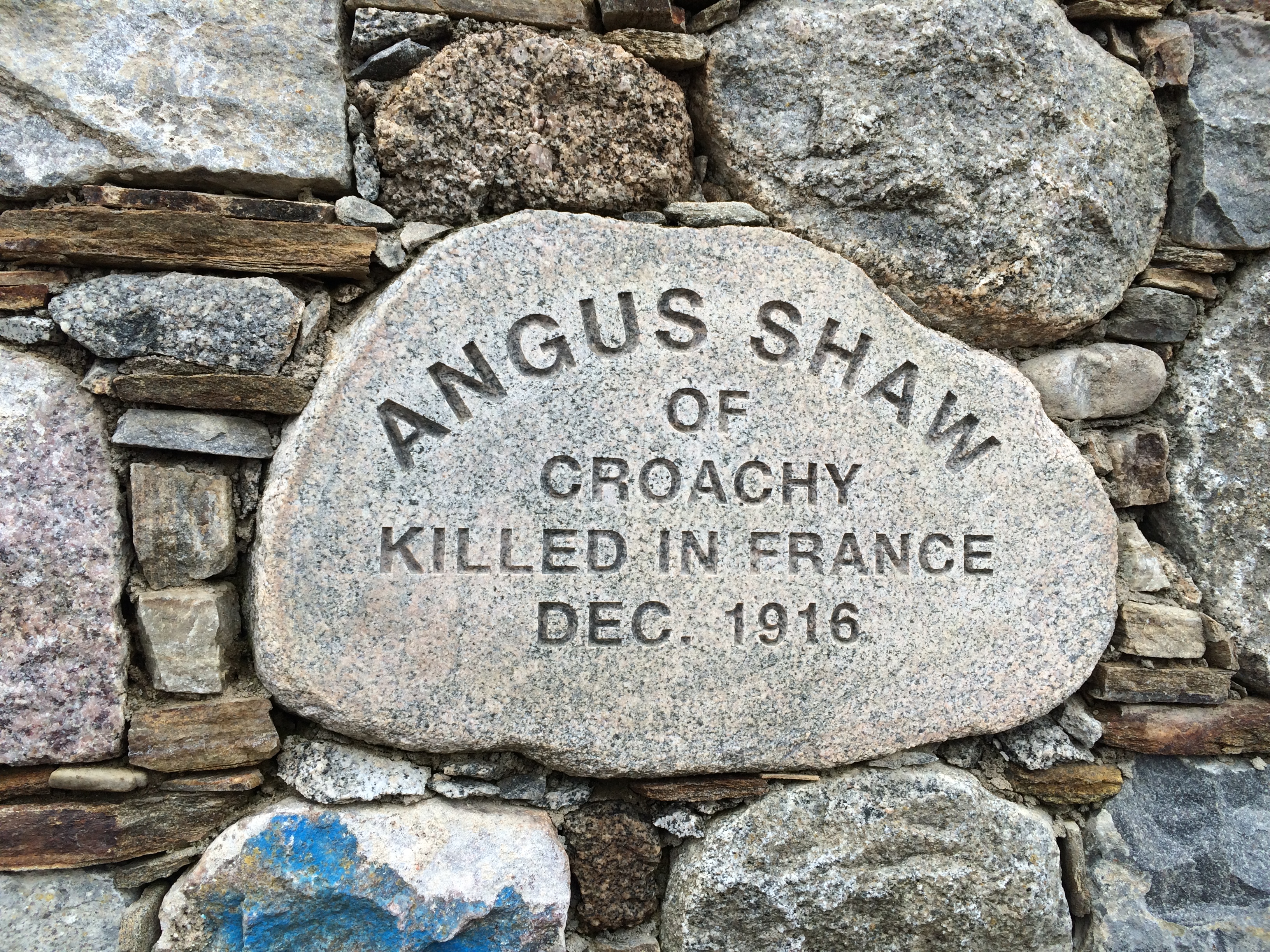 I searched for Angus Shaw in the Commonwealth War Graves Commission website but didn’t find one from Croachy.  There were several Angus Shaws who died in the war, including one from Islay, off the West Coast, who was in the Scottish Horse brigade and died in December 1915.  There is, however, an Angus Shaw from Croachy listed on a nearby village memorial.

For those who grieved his death, this beautiful building will keep his memory alive for another century.