This should be called “stupidity and good luck,” but that doesn’t sound as good.

I spent the night at Spittal Cottage (labeled “ruin” on the map; there was no cottage in sight), making camp in a light drizzle at 7.30 p.m. I know I’m giving the impression it’s raining all the time. That’s not true.  There have been many sunny days. But a drizzle in the evening, and something a bit harder overnight, are common.

Another Challenger, an American named Robert, arrived about an hour after me, discouraged after having lost a day outside Tarfside for reasons I didn’t understand. Neither of us wanted to stand outside in the rain and have anything more than a neighborly conversation. He was up before me and stuffing his pack the next morning  at the time I was just getting out of the sleeping bag.

Like me, he was a day behind. Nevertheless, he was still hoping to finish that day and get to the dinner in Montrose. Challengers can finish the walk on Thursday or Friday.

Thursday is the more common day, and the dinner that night is larger. He calculated the distance to be 30 kilometers and “definitely doable.” By my route it was 34 kilometers (21.4 miles), with 3,000 feet of climb. My conclusion: definitely not doable.

Especially not the way I was going to do it.

I had breakfast, packed everything and headed up a short path to a paved road, which I was to be on for less than a mile. It was 8.35 a.m., my earliest start yet, which allowed me to fantasize about making unheard-of time and getting to the Thursday dinner myself. (That was the orginal plan, before I took an unscheduled rest-and-writing day in Ballater.)  I wanted to finish on Thursday so I could see Roger Hoyle, the man who told me about the Challenge in October 2013 and provided me routes and endless advice. He was gone by the time I finished on Friday last year, and would be gone on Friday this year, too.

Up on the road, I turned right and confronted a sign announcing a 14% grade, which I proceeded to walk up. At the top of the hill, after the road leveled off, I was surrounded by the familiar view of heather-covered moor and grassland. Then I remembered I was supposed to spend the day in Fedderesso Forest, an impenetrable tree plantation with a confusing maze of roads. I fired up the phone, looked at the map and saw I should have turned left onto the road. So it was back down the 14%, and so much for an early start.

I walked on, up and down, through a farm, across a stream and onto a hillside above the stream. I had lost the trail but knew where I wanted to go: the wall of green pine ahead of me. I figured I’d just go along the shoulder of the hill until I hit the woods, then walk uphill along the edge until I found the trail in. (Going through the woods off-trail would be impossible. The trees were densely packed, with branches growing to the ground).

Unfortunately, the hillside was a bog. It didn’t look like that from a distance, and doesn’t look like that in a picture. But believe me, it was supersaturated sphagnum moss with tussocks of grass dotting it in a million islands.

It’s hard enough stepping from hummock to hummock, and judging which patches of moss appear to firm enough to briefly hold weight. I also had a serious desire not to get my feet wet. My boots are lined with Gore-Tex, which is to say they aren’t waterproof. Immersion over the instep is sure to result in damp socks, which is a drag early in the morning. 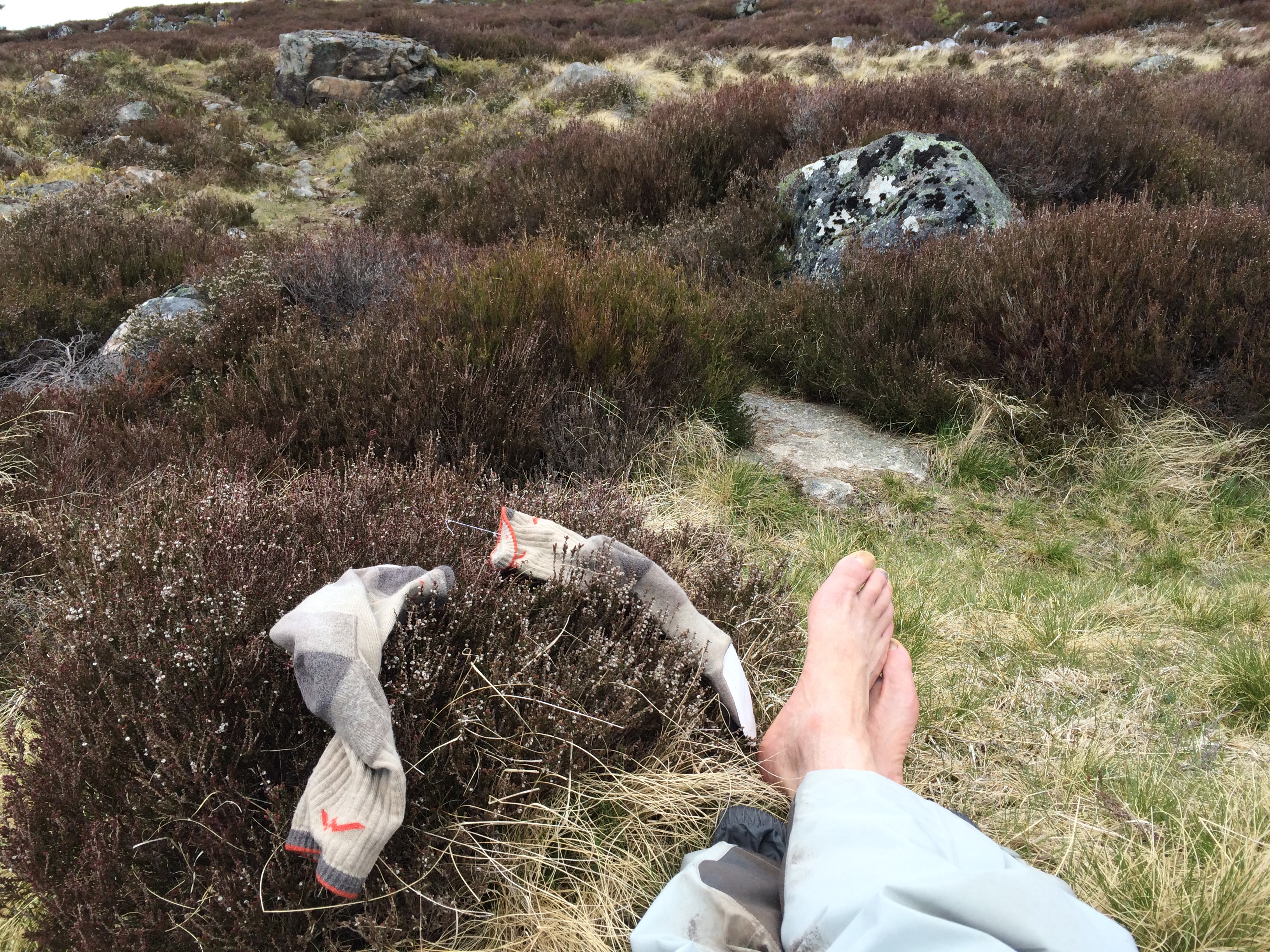 But a bog on a hillside–it’s like a slanted swimming pool. Not supposed to be possible! I named it the Bog of Curses. Halfway across I abandoned my shortcut and headed straight up the hill in hope of finding the lost track. Which I did. I turned and made good time, on the right track into the woods. 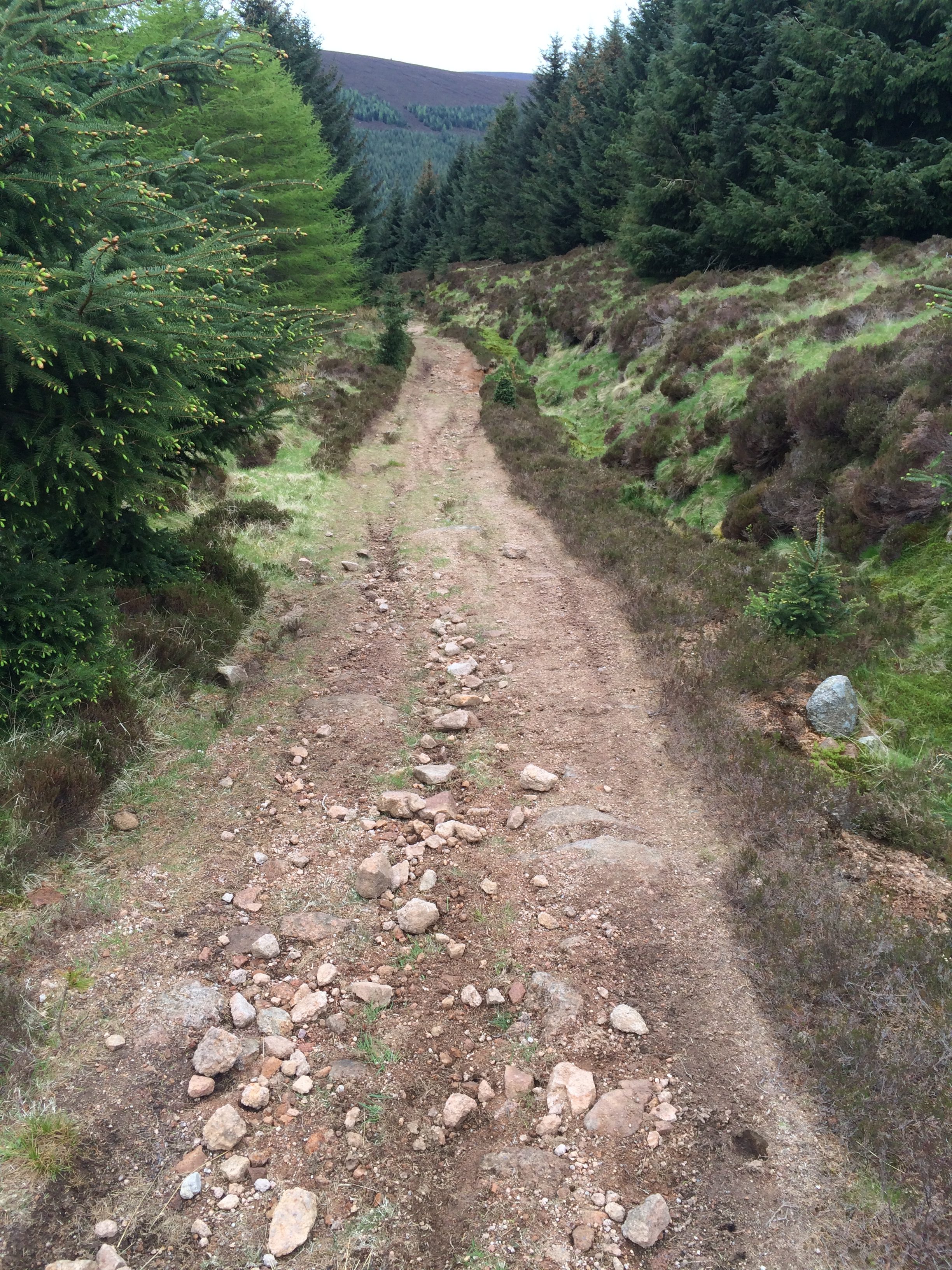 This little escapade of freelancing taught me a useful Challenge lesson (and not for the first time):  Don’t cut corners. Stick to a path, which is the product of collective intelligence. A path is the original example of crowdsourcing, by human beings and animals.

Not checking the route at every junction, I took another wrong turn for a while before getting back on track. There were steep pitches and the road was virtually washed out in places. In others, the surface was a jumble of granite stones. 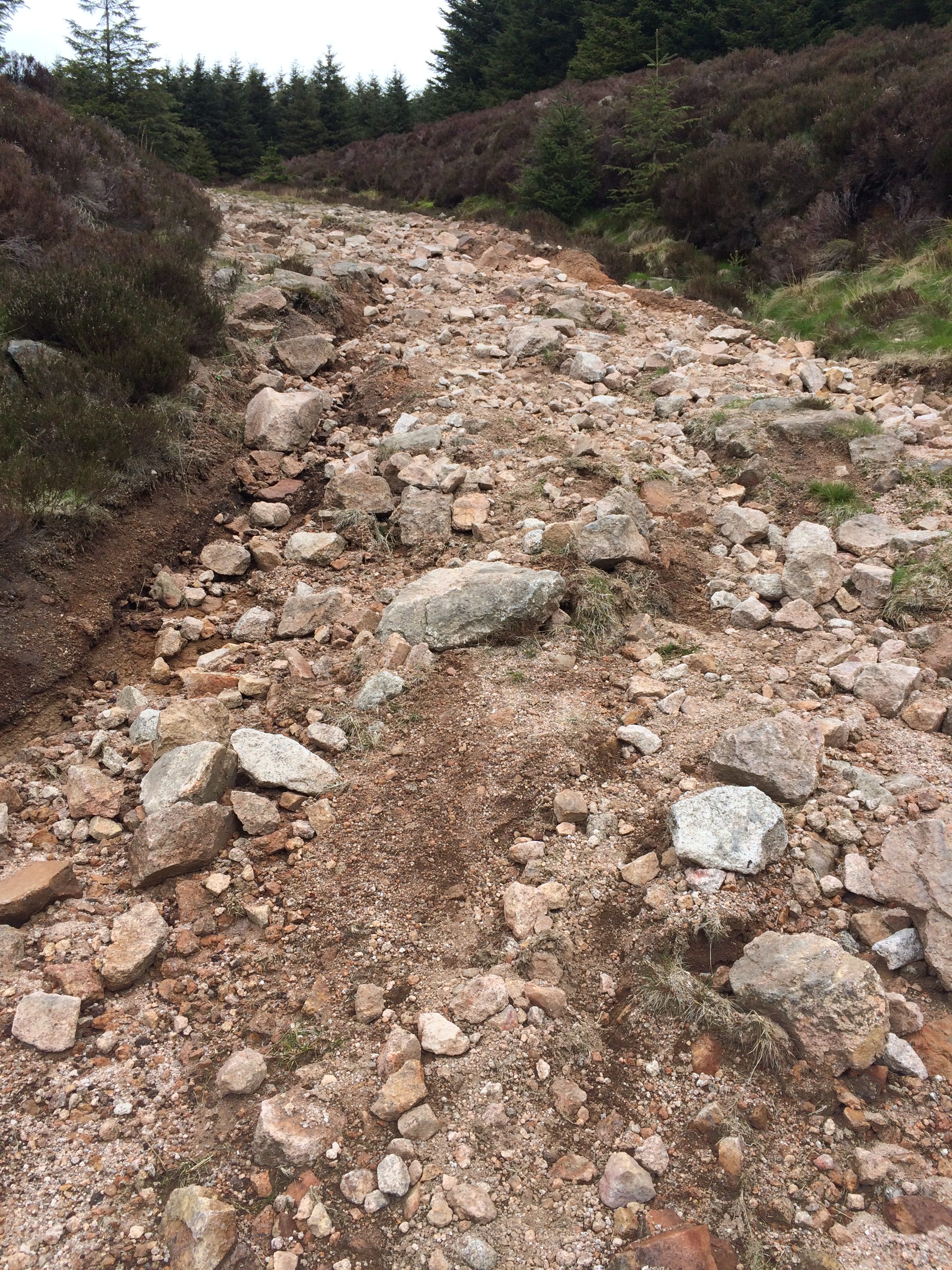 It was drizzling, which is okay to walk in for a while without a raincoat, as it often stops.  But it became steady enough that I heaved off the pack, dug out the pullover rain jacket and put it on.

I had decided not to put soup in the thermos for lunch because I didn’t want the extra weight (the tent was wet and adding enough), so I had nothing to look forward to for a break other than yet another oat bar and a little water.  Which I took out and was unwrapping on a downhill section, happy to have the pack off, when I saw two people trudging up the road.

“How you doing today?” I asked the man as he approached.

“Can’t complain too much.”

“That about describes it for me, too,” I said as I looked at him and the woman next to him.

I had gotten the man’s name wrong; Colin is his son, he is Alan. But it was close enough. 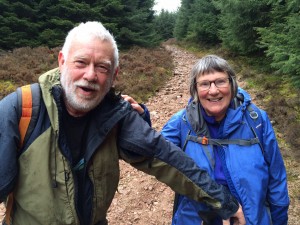 They were the first friends I made on the Challenge last year. I walked with them for parts of three days. I wrote a post about them. Alan has done many things, including worked as a custom-hire guide for wealthy people touring Scotland. Colin, a military veteran, is a helicopter pilot in a mideastern country. And Alan’s wonderful wife (his second) is named Marion and like me is descended from John Brown the Martyr, a Covenanter killed in the early 1700s by an officer of the English Army for not going to the right church. 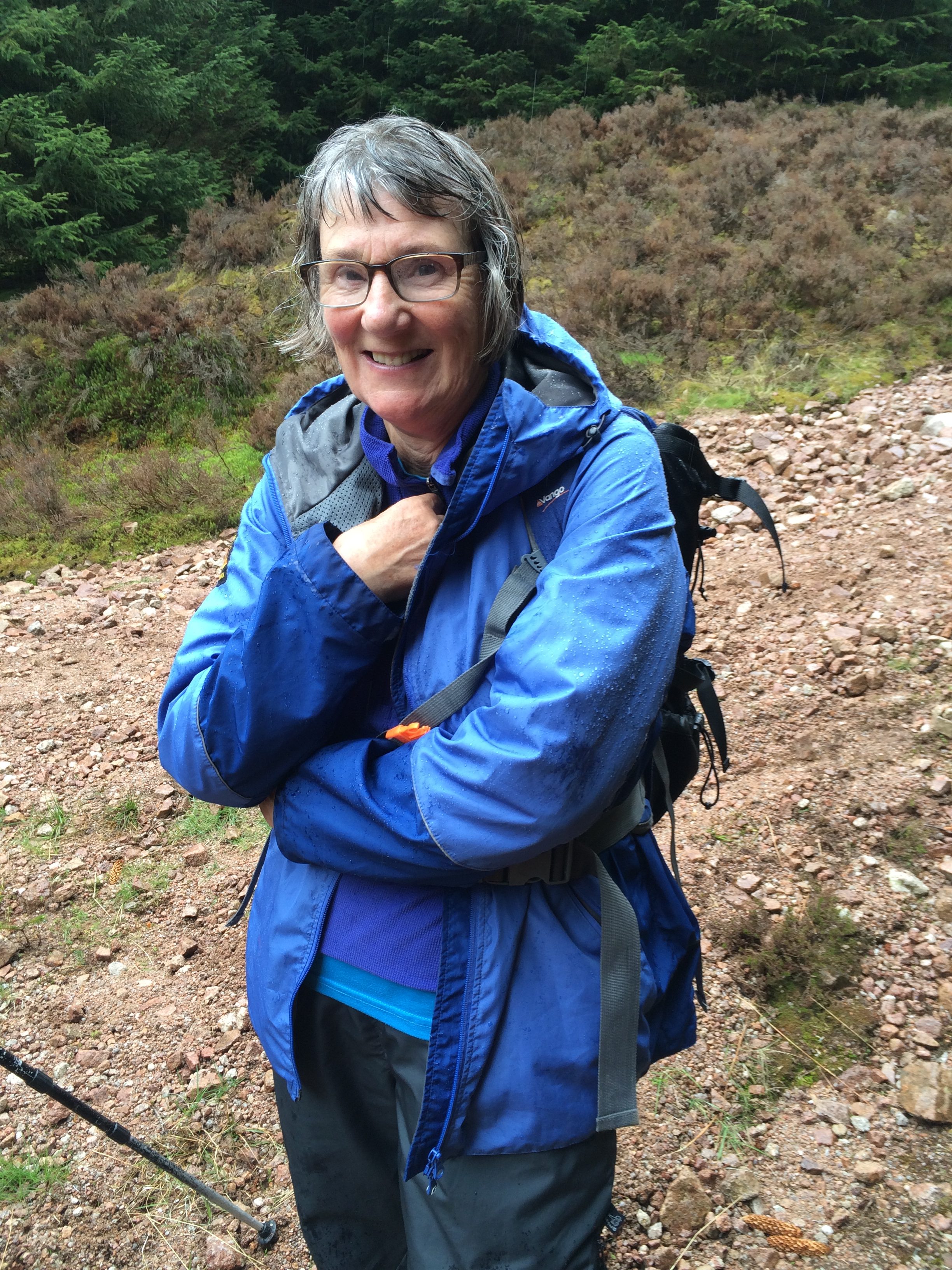 Neither is doing the Challenge this year. Marion has done many, the last one several years ago in a women-only group. Now, she and several other veterans put on a dinner and breakfast (for a modest price) at an old church in a hamlet called Tarfside. It’s such a welcome break that half the the walkers route themselves through Tarfside on the days food is served.

I was there last year–that’s when I met Marion–but my route didn’t take me there this year. Alan was helping her this year and I was sorry I was going to miss them both.   And here we all were chatting in the drizzle! 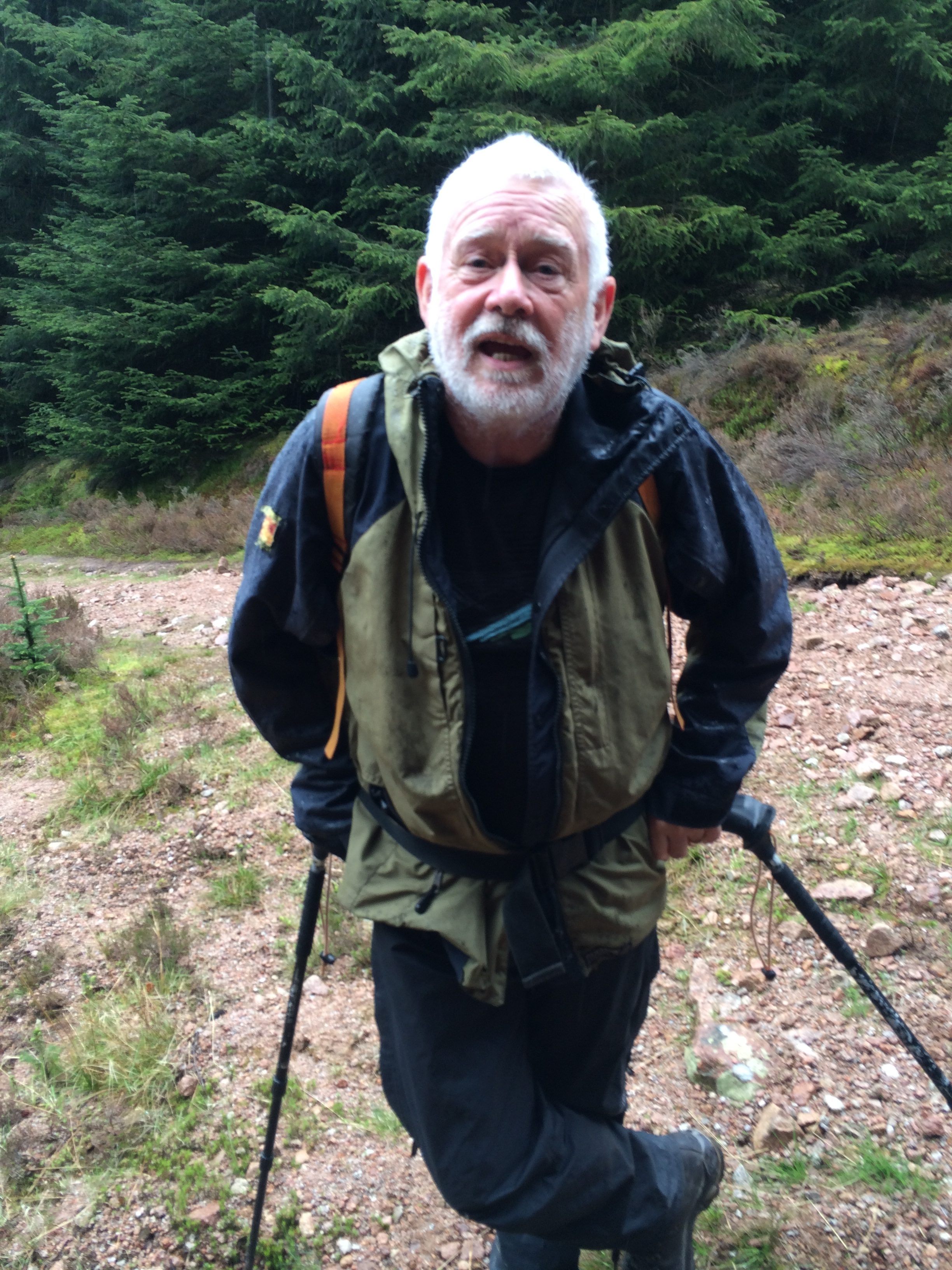 They were going for a walk up a hill they’d never climbed, and then were going to go to Montrose to the dinner. They’d gone trekking in Nepal this spring, on a route around Annapurna (and up to 17,800 feet).  They missed, the earthquake by two weeks. In dinner fees and contributions, they’d raised 1,000 pounds for Nepal relief at the Tarfside festivities.

It was so great to see them. But we had places to go, so after a quick download of news we trudged off in different directions.

If I hadn’t made all those mistakes, I would have missed them.