What follows is partly from the conversation in the bothy but mostly from a more extended conversation two days later.  The exact circumstances you’ll hear in another post.  But in the interest of continuity with the last one, I am recounting Jim’s story here. 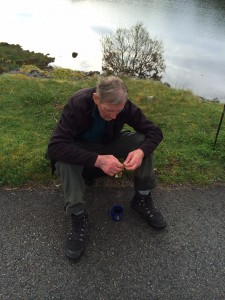 Jim Taylor, who will be 92 in September and is walking across Scotland as I write, left school at age 13 1/2. This required an exemption. Why he wanted it–and why his parents allowed it–I don’t know, but hope to find out. In any case, he was in the top group of students.

He went to work at a farm in Aberdeenshire. He remembered all the farms where he worked by name. He was an agricultural horseman until he joined the Royal Air Force in December, 1940.

This first farm was a small one called Pleidy, with one pair of horses.  Jim was an apprentice, in charge of one horse. He was paid eight pounds for a six-month term, the contract sealed with a shilling payment to the laborer from the farmer. This was in 1935.

After six months, he went to another farm that also  had only one pair of horses. After that to another, Cairn Andrew, whose farmer was a Mr. Robb, where he was a second horseman, in charge of a team.   One of the bigger places where he worked was called Strocherie. There were three teams of horses, each with a horseman. There was a also handyman, a beef cattleman, a dairy cattleman, two parttime gardeners, a greve (the overseer) and two women in the house. Strocherie also had a tractor, the only one in the district. The farmer was a Captain Barclay, a retired Army officer, a bachelor.

He eventually became a first horseman. Everything was done by horse—plowing, carting turnips, hauling muck.  His top wage was 40 pounds a term.

The horsemen got up at 5.30 in the morning, fed and watered the horses (which were Clydesdales), ate breakfast and were in the fields by 6.30.

The food for the workers was hardly more variable.

For breakfast they had rolled oats with boiling water poured on it and mixed, and salt, pepper and milk added. There was never meat at breakfast. Dinner was at noon, sometimes mincepot, sometimes just potatoes and turnips mashed together. Supper was oatcakes, stale bread soaked in milk, or more porridge. There were never fresh vegetables, he said, and only fruit if you went into the village and bought it with your own money.

When war broke out, Jim tried to join the Army. But farm work was a “reserved occupation” and farm laborers were not allowed to enlist because food production was so important. He was turned down.

So he went next door to the Navy, thinking things might be different. But they weren’t.

“‘No, we can’t take people off the land. We’re having to send them back again’.”

A week later the recruiter for the Royal Air Force came to the labor exchange.  Jim went to see him.

He said that he’d been working on a rural electrification crew, but it had moved on and he’d stayed near home.  This, of course, was a lie.  The recruiter gave him some easy arithmetic to do; Jim thinks it was adding fractions.  He passed.  The recruiter told him he’d let him know the decision.

As Jim was walking to the door, the recruiter looked at him and asked: “Now wait a minute. Are you sure you never worked on a farm?’

”He must have seen my gait, the plowman’s gait,” Jim said, remembering the moment.  To the recruiter he said:  “Oh, no no no.”

“Right-o. You’ll hear from us in a couple of weeks.”

Two weeks later he was in.

It was the easy life compared to what he’d seen.  Soon he’d put on weight and could no longer fasten the top button of the two dress shirts he’d been issued.  He went to the supply clerk to get replacements.  He was told he couldn’t get any.

“Those are perfectly good shirts,” the man said.

“But I can’t button the collar,” Jim said.

“Well, you’ll have to go to the doctor and get a chit for a new shirt.”

Everyone who went to sick call had to be prepared to be admitted to the hospital, so Jim packed a kit with his razor, toothbrush and other toiletries.  People on sick call also had to be examined by the medical officer in the nude.  But Jim left his shirt on because he wanted to show how tight the collar was.

“You can’t go in like that.  Take it off,” the sergeant said.

The doctor came into the examination room and said:  “What can I do for you, young man?”

“Whaaaat?” the doctor said.  “I’m a bloody doctor, not a draper!”  He turned to the orderly and mumbled, “Okay give him a chit.”

Jim pointed out that his other shirt was returning from the laundry the next week and he would need a chit to replace that one, too.

“Well, we’ll cross that bridge when we come to it,” the doctor said.

“So the next week,” Jim recalled, “I went through the whole procedure all over again.”

After basic training he became an airframe mechanic, responsible for the pneumatics, hydraulics, tires, controls—everything but the engine—on airplanes. He worked at a base on the northeast coast of Scotland, from which American crews left to bomb German installations in Scandinavia.

He was eventually sent to Nova Scotia, where British airmen trained. He worked on the Mosquito, the famed wooden fighter-bomber. For a time, the plans and specs for it were classified, but the head of maintenance broke the rules and let the airframe crew look at them.

“I became a welder.”

He had many jobs. When he was required to retire at age 65, he got a job helping make barrels with a cooper who had a contract with a distillery. He retired for good just before he turned 75.

He has been a hillwalker all his life.

His wife died 14 years ago this month. He cancelled his plans to go in the Challenge that year because she was ill. She died during the event.  After the funeral, there were a few days of the Challenge left.  So he drove up and walked the end.

Here is video of Jim telling his shirt story.