Further on up the road

One of the great things about The Great Outdoors Challenge is that there’s no dedicated path.  That fact is its own challenge (also great) to first-timers, off-islanders, and all who hope to have direction provided. One time or another you can count me among them.

Instead, what Challengers walk on is what other people created when they had more important things to do than walk for pleasure.

It’s interesting that it’s possible to walk across a country, including a largely uninhabited quadrant of one, on such paths. As it happens, five of the 12 miles I walked today was across open ground and on no path at all. 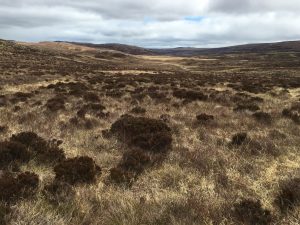 The paths have many histories. Some are drovers trails along which stockmen moved cattle from the Highlands to markets in the south once a year. Some are stalkers trails that hunters wore around the brows of hills so they could spy deer without being seen or smelled. Most, of course, are just ways to get from one place to another. Social trails (including paved ones), although that designation doesn’t express their seriousness and necessity.

Wherever we are, it seems there’s good reason to be somewhere else fairly soon. Even for the most unfree, unable or unadventurous that’s true. “Somewhere else” can be close. Just not here.

It’s impossible not to think about this when you’re walking along. Most of the time your only companion is the slightly cleared area in front of you. And when she isn’t there, you’re missing her.

Here are some of the trails I went on today.

There’s the paved road that led from the end of the loch where I camped.  As with most rural roads in Scotland it is one lane, with passing spots. 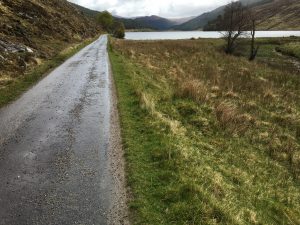 There was an impossibly steep road up through a forest. It’s hard to imagine a vehicle going up or down, although it’s built for that purpose and I was told trucks loaded with just-felled trees use it. 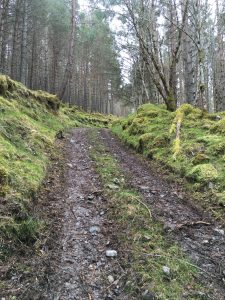 Here’s a little path that keeps your feet from getting wet. 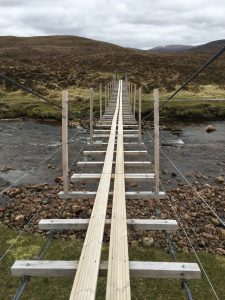 The paths that get to me, though, are those just wide enough for people walking single file, and often worn into a shallow trench that makes even that width confining. 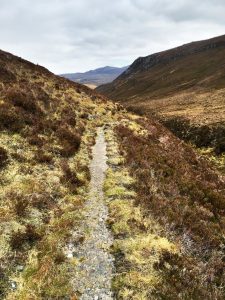 Some of these are undoubtedly animal trails, with the animals capable of making them in this part of the world being cattle, sheep,  horses, and of course deer. 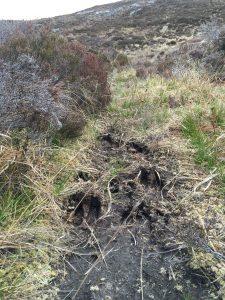 But even if they began with animals, you can be certain that numberless people for numberless generations have walked them, too.

People going to buy or sell, to borrow or repay, to visit or seek solitude, to find a mate or leave one, to pursue or flee, to come back in a few hours or never come back.  And for thousands of other reasons, and reasons in between. 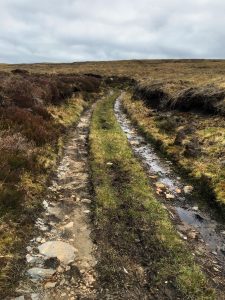 At one point the side of the hill I was walking on changed from a gentle slope to nearly a cliff edge (albeit a cliff of vegetation, not rock). The path, having someplace it wanted to get to, continued straight along the verge. 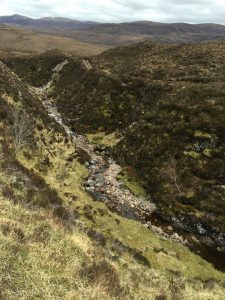 Far below, a stream of clear tannic water flowed over pink granite boulders.  Along it were bright patches of grass surrounded by brown heather, like an ancient bolt of velvet that had lost almost all its nap.

I thought about the hundreds of thousands of people who had walked on it for centuries. Not only the ordinary folks but the exotic ones, too. The Rob Roy types, rustling cattle; the “heather priests,” who spent their lives traveling from one settlement to another; the Covenanters and the Jacobites, and their English tormentors; the tenants driven to the coast in the Highland Clearances; the writers like Robert Burns and Wordsworth, who put the place in words.

Just about then on the iPod shuffle–a great addition to a Challenge, I have to say–came a song from Bruce Springsteen’s “Seeger Sessions” concert in Dublin.

There’s a break near the end where an echoey penny whistle plays the melody. It sounded like it could have been coming up the glen.

The concert was in Ireland and the song isn’t Scottish, but it was music for the moment nonetheless. 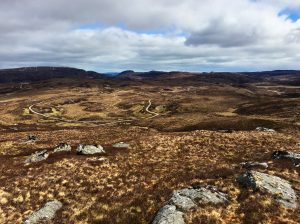