In the spring of 1940, with Nazi Germany and the Soviet Union in a non-aggression pact, France overrun, and Norway in German hands, Great Britain feared it might be invaded from the north, along the eastern coast of Scotland.

Few military planners believed German forces would advance south to England from such a landfall. But with Northern Scotland occupied, the important ship-harboring Scapa Flow in the Orkney Islands in German hands, and British forces damaged from the losses evacuating Dunkirk, some speculated the pressure to make peace with Hitler might be irresistible.

To help prevent that, a massive campaign to protect Britain’s coasts was begun. In Scotland, and especially along the Moray Firth, much of it remains.

The part of the coast I’m walking along has some of the longer unbroken stretches where such defenses were built.  They include 4.5 miles east of Nairn, 7 miles along Burghead Bay, and 2 miles on the west side of Lossiemouth and 9 miles on the east.

The most obvious of these today are the concrete cubes.  You can see them in the distance here. 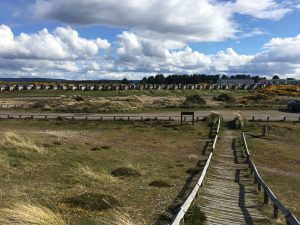 Many are exactly where they were poured 75 years ago. Some are crumbling because of salt in the concrete.  Erosion and evolution of the shoreline has brought some onto the beach and into the water. 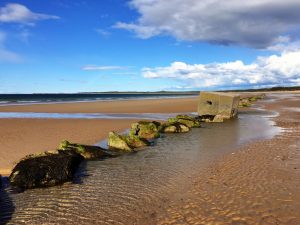 Some were reinforced with steel bars, and have loops protruding from the tops, where barbed wire would be attached. 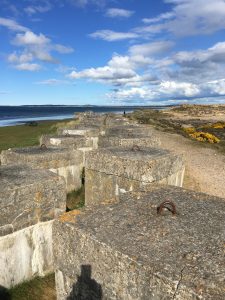 There is a wide variety of pillboxes, most specified by military architects, although some apparently with local design modifications. There were supposed to be two every 1,000 yards. Some were “bulletproof,” others “shell-proof,” and specs said they should have a perimeter of barbed wire at 40 and 60 yards to prevent the approach of flame throwers. 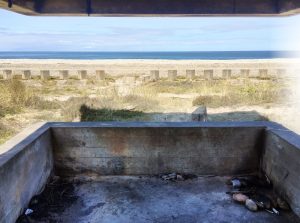 A motley crew of builders constructed the defenses. They included civilian contractors, British army units, members of engineering battalions from the Polish Army in exile, and village boys.

One of the last, Donnie Stewart (about whom I’ll write a later post), was 10 at the time. The war brought great excitement (and some tragedy) to Lossiemouth, the village where he grew up. In the fall of 1940, he and his schoolmates spent a lot of time watching the defenses being constructed. The concrete was mixed on site and shovelled into wooden forms. The boys’ job was to find flat stones to put at the bottom of the forms to keep the concrete from leaking out too much.

Mr. Stewart recalled that one day the officer supervising a crew chewed his men out in an incomprehensible tongue for scratching their initials into the wet cement at the top of a cube. He concluded years later they were probably from a Welsh labor battalion.

Some of the blocks show evidence of having their height raised by a second pour. That was apparently by order of an Admiral Dreyer, who visited the Burghead-area defenses in August 1940. The source for this, and most of the information in this post, is the book: “If Hitler Comes / Preparing for Invasion: Scotland 1940” (2013) buy Gordon Barclay. 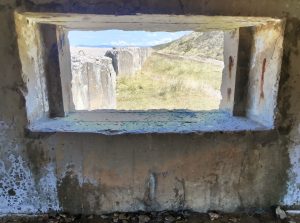 The effectiveness of the barriers was formally tested in May, 1941. It was found they delayed the advance of tanks by only 70 to 90 seconds, and were easily destroyed with one or two shots from a tank’s guns. In May, 1942, the order came down to stop building them.

Fifteen miles between Findhorn and Kingston (which I passed through yesterday) was supposed to have wire-and-steel scaffolding barriers. None were built, although 85 percent of the material was delivered to the beach. You can’t see any of it now.

The anti-glider poles are still visible in some places, as in this tidal mudflat area. 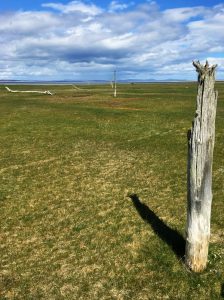 Poles put on the beach didn’t prove stable if they were just placed holes dug in the sand. To solve that problem, the crews buried a steel barrel filled with concrete and then placed a  pole in it. You can still find pole stubs, with the outline of the barrel at the level of the sand. 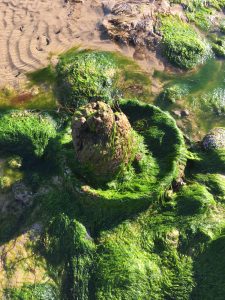 On some popular beaches the concrete barriers were eventually removed. Jean Turner, a retired surgeon whom I met last year and who grew up in the coastal village of Portsoy, recalled that when she was girl “we used to use the spaces between them as changing rooms and picnic spots.” (Jean, at 76, is this year’s senior Challenger.)

Less picturesque and romantic than ruined castles, they will nevertheless be here for a long time to testify to the belligerent history of this beautiful coast. 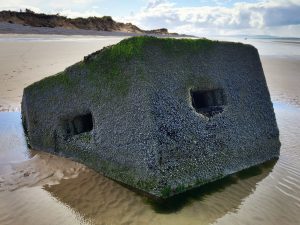