While researching this trip I wrote several museums and libraries along the route, inquiring whether there were any old people who lived in the area during the war who might be willing to talk with me.

I hoped I’d find someone who remembered watching the training exercises for the Normandy invasion that occurred along the coast in the winter of 1943-44. In hindsight that was unlikely, as the people near the rehearsal sites were evacuated, and the activities, in any case, were considered secret.

My inquiry paid off in another way, however.  It led me to 84-year-old Donnie Stewart.

The librarian for the Lossiemouth branch of the Elgin Library, Jane Thomas, with considerable generosity and effort, arranged for me to interview Mr. Stewart.  She also agreed to open the library 45 minutes early so we could talk before the public arrived.  As an added bonus, she arranged for me to get a tour of the 19th-century Covesea lighthouse outside Lossiemouth. 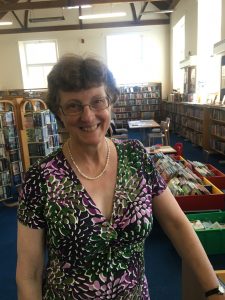 I walked out of the Skerry Brae Hotel, where I’d spent the night in a £30 room, with just enough time to get to the library by 9.15 a.m. I was, of course, carrying a backpack. The first car that came by pulled to the side.  A man rolled down the window and called me by name. It was Mr. Stewart and his seven-year-old springer spaniel, Pepper.

So we got to the library at the same time–and a few minutes early. 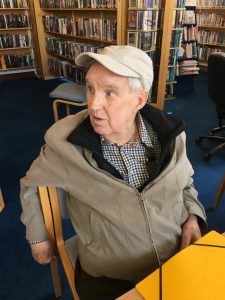 Mr. Stewart was born in 1931 in Lossiemouth, descended from four generations of fishermen. He was the youngest of five children. His father was colorblind, which prevented him from being a boat skipper. However, he owned a quarter of the boat he fished on.  One of his father’s brothers had  gone to California, working first in Needles on the railroad, and later in Los Angeles in the oil industry.

Mr. Stewart’s father started out fishing on sailboats. Those craft  were replaced by steam drifters that required crews of 9 or 10 men. They, in turn, were replaced by diesel-powered boats, which were more practical and needed only a crew of five.

They fished for herring with drift nets. “Herring fed at midnight. You put your net out at tea time, and came back at breakfast time and it was full,” Mr. Stewart said.

Most of the herring fishery collapsed with the loss of the German and Russian markets in World War I.  The catch switched to haddock and cod, caught with seine nets. A good day was 100 boxes, with each box weighing seven stone, or 14 pounds. The men gutted the fish on the boat, leaving the heads on.

Herring had been sold through futures contracts, but haddock and cod were auctioned every day (except Sunday) at 3 p.m. on the dock. The fish was then shipped south by train and truck.  The price was higher on Thursdays, when most of it went to Glasgow, whose large Catholic community couldn’t eat meat on Friday.

Mr. Stewart’s family had fish every night except Sunday, when they had sausages. I asked if he got sick of it.

“What would you want to do, starve? With five children, if you didn’t eat it it would soon vanish off your plate.”

Mr. Stewart’s brother, Peter, volunteered for the RAF in 1938 “as soon as he recognized that Hitler meant business.” He was a flight sergeant, a radio operator and a gunner on a Wellington bomber. He died in 1942, bombing Cologne, and is buried in Germany.  Another brother, Jim, was on a minesweeper, accompanying convoys to Malta.  A sister was in the British equivalent of the WACs as a clerical worker.

For Donnie and his friends, however, the war meant excitement and freedom. “We viewed it as entertainment,” he says today, with candor and chagrin.

“Boys had a great life. We went out after breakfast and were out all day. School was an interruption. We knew all the men at the harbor and how much they were making. We went to weddings and funerals. We didn’t want to see our parents. Grown ups said ‘No’.  Plus, the house was cold.  There was only one coal-burning fire.”

In the late fall of 1940, when there was a massive effort to line Scotland’s northeast coast with concrete tank barriers, he and his friends helped collect flat stones for their foundations. They weren’t paid; it was to be part of the action.

Some of the excitement was tragic.

In July 1941 a Junker 88, aiming to bomb the nearby aerodrome (whose construction in 1938 had brought full employment to Lossiemouth), dropped four bombs on the town.

One blew off the back of a house, one fell in the street and one fell unexploded in a quarry. But one landed on a house and killed four people–two locals and two people who’d moved up from Portsmouth, England, to be safe.

Plane crashes were common. “Three hundred and eighty-four people died learning to fly out at the Lossie aerodrome,” Mr. Stewart said. One crash was especially memorable.

“We sat and watched this plane take off from the aerodrome near the golf course. We watched it swing around, and then the starboard wing fell off and landed on the 17th fairway. The rest of the plane went on for 400 meters and crashed on that rock,” he said, pointing as we drove along the shore on the way to the library.

It was high tide and there were no flames. A man tried to swim out to them and was drowned.  The entire crew of five died. Three of them were Australian.

“I met the nephew of one of them a few years ago,” he said. “He had come to see where Uncle Ed had died.”

He told a story about one of his classmates at Elgin Academy, where he later went to school. The boy, Danny, and a friend “played down at the rocks as we did. They found a strange object and tried to open it up. After a few tries, the other boy decided to use the traditional method, and battered it with a stone. It exploded, because it was a booby trap, dropped by the Luftwaffe along the East Coast in large numbers. The other boy died and Danny became partially but increasingly deaf.”

Twelve days after VE-Day, on May 8, 1945, a Wellington bomber testing its engines crashed in the town, killing a woman, her five sons, and two other people.

Donnie Stewart never went to war. He did spend two years in National Service after the war, earning four shillings a day. (“Egg and chips at the time cost 2 shillings 6 pence, a half-day’s pay.”)

He went to the University of Aberdeen and eventually earned a master’s degree in metallurgy. He worked at British Petroleum, and he also taught at Strathclyde University. He got early retirement, thanks to Mrs. Thatcher, and moved back to Lossiemouth when he was 60.

His wife died several years ago. He has one child and one grandchild.  And Pepper.

The tragedy at Slapton Sands