When I was done talking with Donnie Stewart (with whom I could have happily talked for another couple hours), I was turned over to Iona Kielhorn.

She is one of the people who takes people up Covesea Lighthouse, which  is just west of Lossiemouth.  It is a simple and handsome white column, designed by Alan Stevenson, the uncle of Robert Louis Stevenson.  Four generations of the Stevenson family of architects and engineers built 97 lighthouses in Scotland over 166 years. 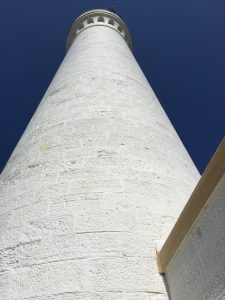 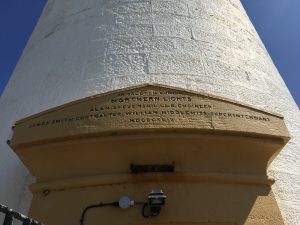 Like all old lighthouses, it’s a model of good design and mechanical efficiency.  It’s constructed from local sandstone, with a brick lining, and an air space between the two to allow the moisture-absorbing sandstone to breathe.

It was lighted with liquid paraffin, carried up the 140-odd steps in containers that look like covered watering cans.  A bigger inconvenience was that the weight driving the rotation of the light had to be wound up every two hours to keep it turning.

There were two lighthouse keepers, living with their families in attached houses at the base of the lighthouse. 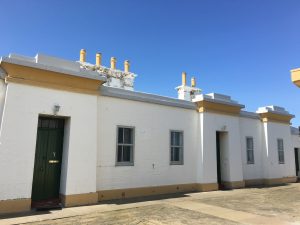 Aided by a Fresnel lens made in Paris, the white light could be seen 24 miles away on a clear night.  For part of the 360-degree rotation the light shone through a red lens.  This provided a direction toward the opening of Lossiemouth Harbor to which boats could steer. 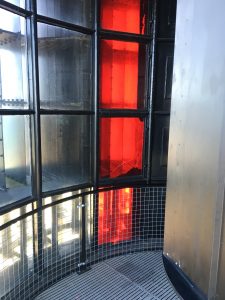 Ms. Kielhorn and another guide, Lynne Hawcroft, took me onto the outer walkway at the top.  (Iona is on the left.) 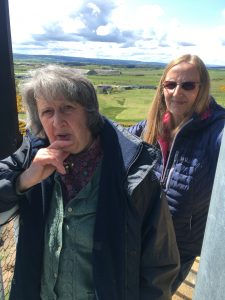 The views were great. Both prop planes and jets were taking off from the Lossiemouth air base. 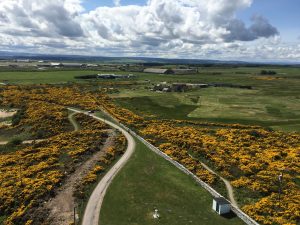 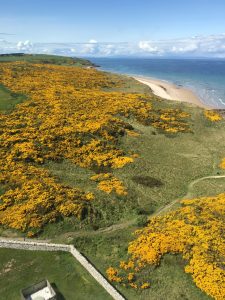 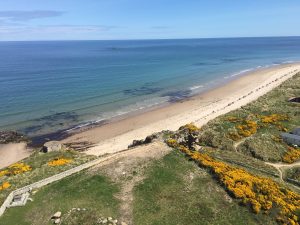 So who’s the local hero?

Iona Kielhorn is the granddaughter of Ramsay MacDonald (1866-1937), the first Labour prime minister of Britain.

MacDonald was born and reared in Lossiemouth.  His mother was a housemaid and his father was a farm laborer on the estate where she worked.  They weren’t married–and didn’t get married.

The stigma of being an illegitimate child must have been considerable in Victorian England (although Wikipedia reports that among the rural population the out-of-wedlock birth rate was about 15 percent at the time).

“Jamie”–his first name was James–left school at age 15 to do farm work, although he was “clearly brilliant,” Iona said. He didn’t last long.  He was recruited to be a teacher while still a teenager. At one point, he studied chemistry and mathematics in hopes of becoming a scientist.  But he never finished secondary school and had no college degree.

He eventually found his way to London, where he got interested in politics, knew George Bernard Shaw, and was one of the founders of British socialism.

I asked Iona how it was that the child of a single-mother charwoman could break out in the way he did.

“I would say he benefited throughout his life from the help of strong women,” she said.  “His grandmother told his mother:  ‘You don’t have to marry this MacDonald if you don’t want.  I will help you raise the child.’  His wife, too, was very strong.  And wealthy.  Plus, he was a handsome man.”

MacDonald had a complicated route through the factionalism of the early years of British socialism, gaining recognition as a journalist and political essayist, and eventually becoming a member of Parliament.  He and his wife had six children, whom they parked with his mother in a house he built in Lossiemouth while making extended visits to Australia, the United States, and Canada.

He opposed England’s participation in World War I.  The Moray Golf Club banned him from membership for life. Lossiemouth locals painted the word “Traitor” on his house.

“We eventually washed it off.  We should have left it up,” said Iona.

He became prime minister in 1924.  His term was short-lived, but is credited with showing that Labour could run a government responsibly.  He led a socialist government again from 1929 to 1931.  He resigned amidst the squabbling in the political left about how to address the economic crisis following the stock market crash.  He was asked by the king to form a National government–a coalition of all parties.

He agreed.  Elections were held and the National government won a huge majority.  Very few Labourites joined the government (but many Conservatives did).  Macdonald was expelled from the Labour Party, never forgiven.

At some point, after three stints at 10 Downing Street, the Moray Golf Club said they would have him as a member.  He refused to join.  He died two years before the outbreak of World War II.

I asked Iona Kielhorn if Lossiemouth still views him with suspicion.

“It’s coming up on the 100th anniversary of his banning.  I live in his house, and everyone wants to get in and see it.  I have them eating out of my hand now,” she said puckishly.

And right next to the circulation desk at the Lossiemouth Library is his bust. 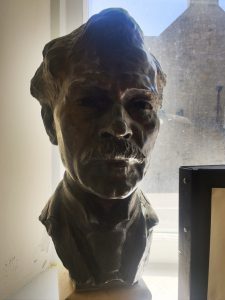