I camped the night before the last day of the walk on the outskirts of Gardenstown. I spent several hours walking off a bad Chinese meal from the only restaurant open in MacDuff, a village seven miles to the west. (I’ve concluded that at Chinese restaurants, the more choices there are the worse the food is. When there’s a lot on the menu, everything must come pre-packaged).  I’d been told to eat at the Knowes Hotel, but its restaurant was closed, awaiting a chef.

It was a very long evening, and it took a while to find an acceptable camping spot.  I should remind readers that the Scottish Outdoor Access Law allows people to cross private property (even off paths), and camp on private property away from houses and livestock. It’s an amazing public-use ethic Scotland has, and I doubt the Challenge could exist without it.

I pitched the tent at 10 p.m.  I’d left the footprint in Portsoy, so I was glad it wasn’t raining and that none was predicted. 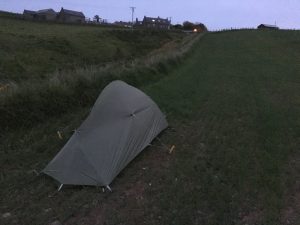 When I arose the next morning, I got the attention of two horses in a field to the left, who in unison trotted with high-stepping feet around their pasture before periodically stopping to stare at me.  It was a show.

Once underway, I found myself behind two women walking a dog.  I was just close enough behind them to get and keep the dog’s attention, too.  They picked up the pace to get him out of curiosity range.

I was badly in need of a cup of coffee, having only had a cup of instant with my Cup o’ Noodles breakfast.  I followed the women and the dog, assuming they’d go through the thick of things in Gardenstown.  I don’t know why I assumed that.

They wound around a surprisingly suburban purlieu of streets and courts with houses that seemed all of the same vintage.  They finally stopped and engaged in conversation two people who were outside adjacent houses.  I asked them if it were possible to get a cup of coffee in Gardenstown that time of day.

They said a snack bar at the harbor–a steep walk downhill–might be open. A more likely place was a gas station and convenience shop a few blocks away (and only a little uphill).

I followed their directions and found a Spar shop with a couple of pumps.  A man was checking the gas supply through a small manhole cover as I walked by.  He greeted me in a strong accent I could barely understand.

I went into the shop and got a cup of coffee from the push-button, multi-drink machine.  It was cool outside and threatening rain, and I didn’t really want to stand outside drinking the coffee.  So I picked up the shop copy of a book of old Gardenstown photographs from the turn of the 20th century and started leafing through it.

A few minutes later, the man who I’d seen outside came in, greeted me again, and beckoned me to come outside.  “Bring the book if you’d like,” he said.

I went out and he took me to a small building next to the shop.  He opened the door to a one-room, homemade museum to Gardenstown fishermen and assorted other bygone things.

The curator, and proprietor of the shop, was named Bob Watt.  (I concluded it was a common name in the region when I saw seven men named Watt on the World War I monument in Fraserburgh).  He was 53-years-old, but could pass for 43.  He was intensely social in a nervous kind of way.  I introduced myself, and he addressed me by name in nearly every sentence. 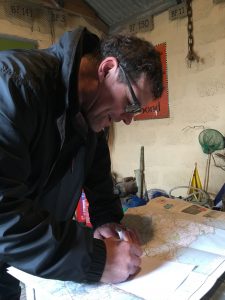 If you tap on the picture to blow it up you’ll see behind Bob, where the wall meets the ceiling, little burlap squares with BF and a number written on each one.  They are the registry numbers for fishing boats that used to be owned by Gardenstown fishermen.  Gardenstown boats were registered in the Banff district (which is what BF stands for).  They’re all gone now.  These are headstones for them. 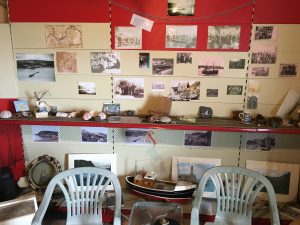 Their workweek began at midnight on Sunday.  “The people here are very religious,” Bob said.  Fishermen had to wait until the first minutes of Monday before they could go to work.  They went a hundred miles into the North Sea for prawns, cod, hake,  and monkfish.  They fished around the clock until Friday, when they came into Fraserburgh and sold the catch.

The fish were gutted, and the heads were taken off the prawns.  For years the work was done on tables on an open deck in all weather.  “It was hard,” Bob said.  He found a picture in his collection of the kind of boat he worked on late in his career.  It had a sheltered deck, where fish-cleaning could be done under cover. “It made the job as good as it could be.  We thought it was heaven.”

I asked how they could catch and hold fish for as long as five days and still have it be worth selling.  “We packed it in boxes, with ice on the bottom and ice in the top.  They were all down in the hold in tiered stacks.  When we got back it was fresh as paint.”

Bob  hadn’t been a fisherman in about 20 years.  I asked him why he stopped.

“I fell overboard,” he said.

“Did you know how to swim?”

“Yes.  But it was very rough.”  He made an undulating gesture with one hand.  “It was a dangerous situation.”   He obviously didn’t want to talk about it.

I tried to imagine what it would have been like to be in 45-degree water with no life jacket, trying to catch a line thrown from a bucking ship and hold onto it long enough to be hauled on board.  Possibly in the dark.

After that, Bob couldn’t sleep on the boat.  He’d wake up because of nightmares.  Six months later, he left fishing.  The gas station and snack  shop came up for sale and he bought it.

I asked if at least the money was good.

Bob hoped the little museum would entice tourists–bicyclists in particular–to linger at the store and learn a little about the town.  He hadn’t yet put the sign out on the sidewalk for the season.  He’d done some oil paintings of local scenes, quite good, and had color photocopies of them on display.  He’d sold the originals.  He was proud to have been a fisherman, and was proud of Gardenstown.

I inquired about the walkability of the cliff tops between there and the next hamlet, Pennan.  He wasn’t sure but advised against trying.  He drew me a map showing how to get out of town and onto the road that ran closest to the coast.  His accent was strong.  I can’t remotely reproduce it.  But he pronounced “farm” as “farum”–a word with two equally stressed syllables.

I thanked him and told him it was a pleasure to meet him.

“I hope to see you back again sometime, Dave,” he said. 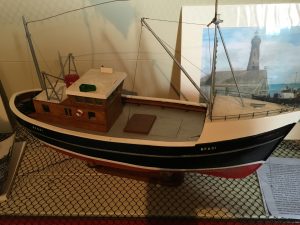