Just to the west of Tarfside, before you get to the village, is the Hill of Rowan. It is bare of trees and has on its top a conical stone monument that can be seen from far off.  Several people on the walk commented they always mean to go up and look at it.  But the lures of Tarfside–pub, hostel, socializing, the removal of boots–conspire to put a visit off until next year. 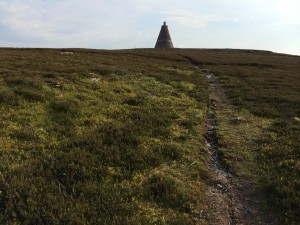 Not knowing whether there is going to be a next year, I decided to go up it.  I was with two other soloists, Andy and Lindy.   We walked along the north shoulder of the hill until a trampled path appeared going up through the heather.  They weren’t tempted to go.  The path was steep, it was hard to judge the distance to the monument, and it was after 6 p.m.

“I may regret this,” I said as I dumped my pack on the ground and the other two went on. 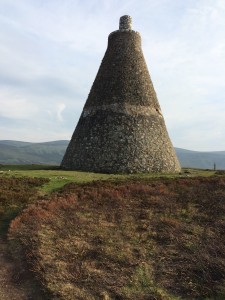 It wasn’t as far as it looked and the view, unobstructed except for the monument, was spectacular.  The  monument is the usual brown and gray stone, with a plug-like cap in white stone, probably quartz. 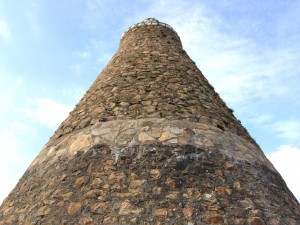 It is built for the ages.  A narrow iron gate opened into a chamber where there were some soggy furniture cushions but nothing more.  The chamber is about 12 feet high and the monument 50, so it seems to be mostly solid rock. There was no plaque anywhere.  On the grass outside were stones arranged in strange, runic designs. 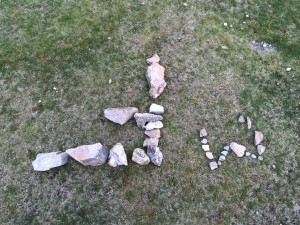 I was back at my pack 38 minutes after I left.  It was definitely worth the detour.

In the tent city on the green a couple of people asked me what the monument commemorated when I told them I’d gone up to see it.  I told them I didn’t know; there was nothing explaining its purpose.  The bar tender at the pub offered one, which I confirmed the next day at the museum down the road.

The monument is known as Maule Cairn, built in 1866 by Fox Maule, the 2nd Baron Panmure and the 11th Earl of Dalhousie.  He and his wife had no children.  His brother, who would have inherited the title, died of cholera in the Crimean War in 1854.  The earldom was “moving sideways” to a nephew.  The monument was to Maule’s soon-to-be-extinct line of the family.

The bar tender had added that there use to be a plaque on the monument.  But when the crofters had been forced off the estate to make way for sport hunting some of them had gone up and smashed it.

I couldn’t confirm the latter in a brief web search.  But from what I’ve learned of Scottish history in the last two weeks, it sounds credible.  In any case, it seemed like an Ozymandian memorial.

The next day, walking out of Tarfside, I passed another monument.   From it you can see the Maule Cairn in the distance.  This one, however, was in memory of the local parish’s soldiers who died in World War I.  They were listed by rank, one sergeant of the Gordon Highlanders and 6 privates of the Black Watch, two of whom had the same last name. 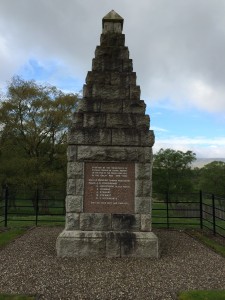 At the bottom it says:  “They did their duty and their bit”

“Their bit.”  They and 8 .5 million other men.  The modesty could break your heart. 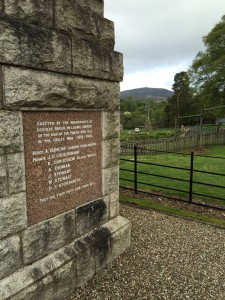