There are many jokes about Scottish weather but they all involve one of two conceits:  it’s going to change, and it’s likely to get worse.

So it was a bit surprising how wonderful the walk was from Tarfside to Edzell.  The weather was perfect and stood still, and time seemed to also.

This is typically viewed as one of the less appealing days of the crossing.  Less appealing because the sense of timelessness that sets in about Day Three has an end you can feel–and almost see–just ahead.  And also because the walk is now in the east, where Scotland is a modern country.  Behind you is the empty and harsher west, where the ghosts of the dead, not the work of the living, animate the landscape.

It’s possible to walk to Edzell, the town one-day’s distance from the east coast, on paved road.  But with a little effort one can cross to the south bank of the River North Esk, and go on dirt roads and farm tracks, some no more than two stripes of flattened but undamaged grass across a field.

That’s the way I went.

It required a walk down the paved road a few miles before one got to the first bridge across the river.  The bridge, in turn, was down a gravel road that required a near-hairpin turn to get onto.  Just after the turn there was a sign naming a bridge that was out and could no longer be crossed.

Not knowing the names of the bridges across River North Esk, I was worried the sign was saying that the bridge ahead was washed away. In which case I would have to turn around and head down more asphalt road to the next bridge, which was a private one we’d been told not to use.

Luckily, a little red Royal Mail car turned down the lane shortly after I did.  I flagged it down.  The driver–they’re in the right front of the car over here–got out.  We had a brief chat and he told me that the bridge named on the sign was the one farther up the river near Tarfside, where I’d come from.

Useful information, I thought.  I concluded the sign was there more to confirm the good judgment of drivers heading toward the open bridge than to provide actionable information for people who wanted to know whether the bridge ahead of them was open.

I thanked him and he drove off.  Ten minutes later, just as I finished crossing the bridge, he passed me, heading back to the main road.  We waved.

The next few hours passed in a benign haze.  Or maybe it’s what’s called “being in the moment.”  It’s hard to know what happened.  There was a lot of green.  A lot of grass.  Many sheep.  Many lambs.  A few gates.  Lots of sun.  And no people.  Although there were many ahead of me–I’d lingered two hours at the Glenesk Folk Museum–I saw not a soul. 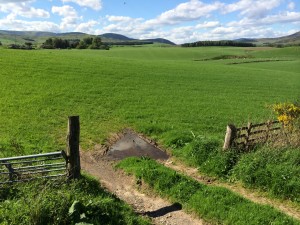 I have to say, the mix of sociability and isolation that characterizes the Challenge is one of its chief appeals.  There’s a subtle but universally understood protocol (informed, I speculate, by British reserve and self-distancing) that keeps people apart as the default condition and together by choice.  It’s an interesting state for an American.

In a telling moment a week earlier, I had been walking with two other people (one of whom was doing the Challenge with two people whom he wasn’t with much of the time).  They were faster than me and slowly pulled away.

We came to a wooden corduroy bridge over a small creek.  The end of my trekking pole went between two boards and left behind the rubber tip, wedged between them.  I didn’t notice this until on the other side each pole-plant made a metallic report instead of a dull rubbery one.

I stopped and walked back to the bridge.  Luckily, the rubber tip was still there; it hadn’t fallen through.  I retrieved it, put it back where it belonged and proceeded on my way.

When I looked up, the two people ahead of me were looking back.  They were aware enough of my presence to sense I’d stopped, and had turned around.  They’d observed my chore and one of them gave me a thumbs-up sign.  But they didn’t wait for me to catch up.

That’s the Challenge in a nutshell.

Anyway, it was a beautiful day, even for a brooder like me.

There was an exceptional number of birds on the wing.  I was walking into a the wind, and black and white birds with beautiful crests evident only when they landed seemed to be following me.  They were lapwings, also known as pewits.

For a while I thought I might be disturbing their nests and they were scaring me off (or at least showing me to the door).  But there were so many, and they kept bucking the wind and then turning to fly with that I concluded they were just having fun.

There was also the occasional curlew, a brown curve-billed pigeon-sized bird whose American cousin is extinct.  Lots of songbirds I didn’t recognize.  And oystercatchers. 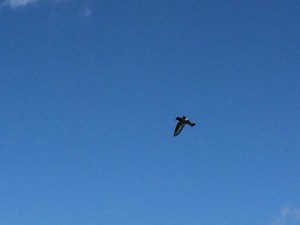 I don’t know much about birds, but I do recognize oystercatchers.  They’re hard to miss, black, white, with orange bills and a distinctive call.  But what were oystercatchers doing in a place with no oysters?  No salt water even.  I can’t answer except to say:  we weren’t actually that far from salt water.  The North Sea was just a day’s walk away.

Eventually–and eventually comes fairly quickly–my feet were hurting enough to take my afternoon break.  I’d say it was the “usual afternoon break” except I’d only done it  three or four times.  But I was beginning to think of it as the thing to do.

I stopped next to the river and made my way down to the shallows. I took off my boots and put my feet in the water.  It was too warm to do much work, so I didn’t get out the stove and make soup and tea.  I filled the Nalgene with water from the river, drank and ate my British oat cereal bar.  This is what I saw. 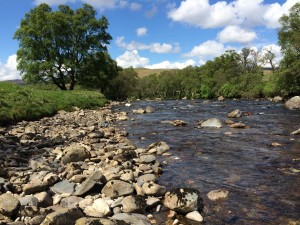 I lay down on a large rock that, by chance, was sculpted close enough to the contour of my body that I almost fell asleep. 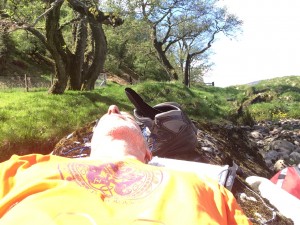 It’s a good thing I didn’t.  I still had miles to go to get to Edzell.  But I hardly remember the rest.