The trip ended on a Thursday morning after a big dinner the night before. The members of the group dispersed in various directions, many staying longer in Europe. I stayed an extra day in Genoa and Ellen and Jim stayed two.

On my last day we took an outing Ellen had found in her research.  It was to the Regional Natural Park of Portofino, an area between Genoa and Cinque Terre.  We took a half-hour train ride to the town of Camogli and then hiked along the coast to an abbey whose origins were in the 11th Century, at a place called San Fruttuoso.

We climbed out of Camogli on stone steps and ramps, past terraced gardens and olive groves. 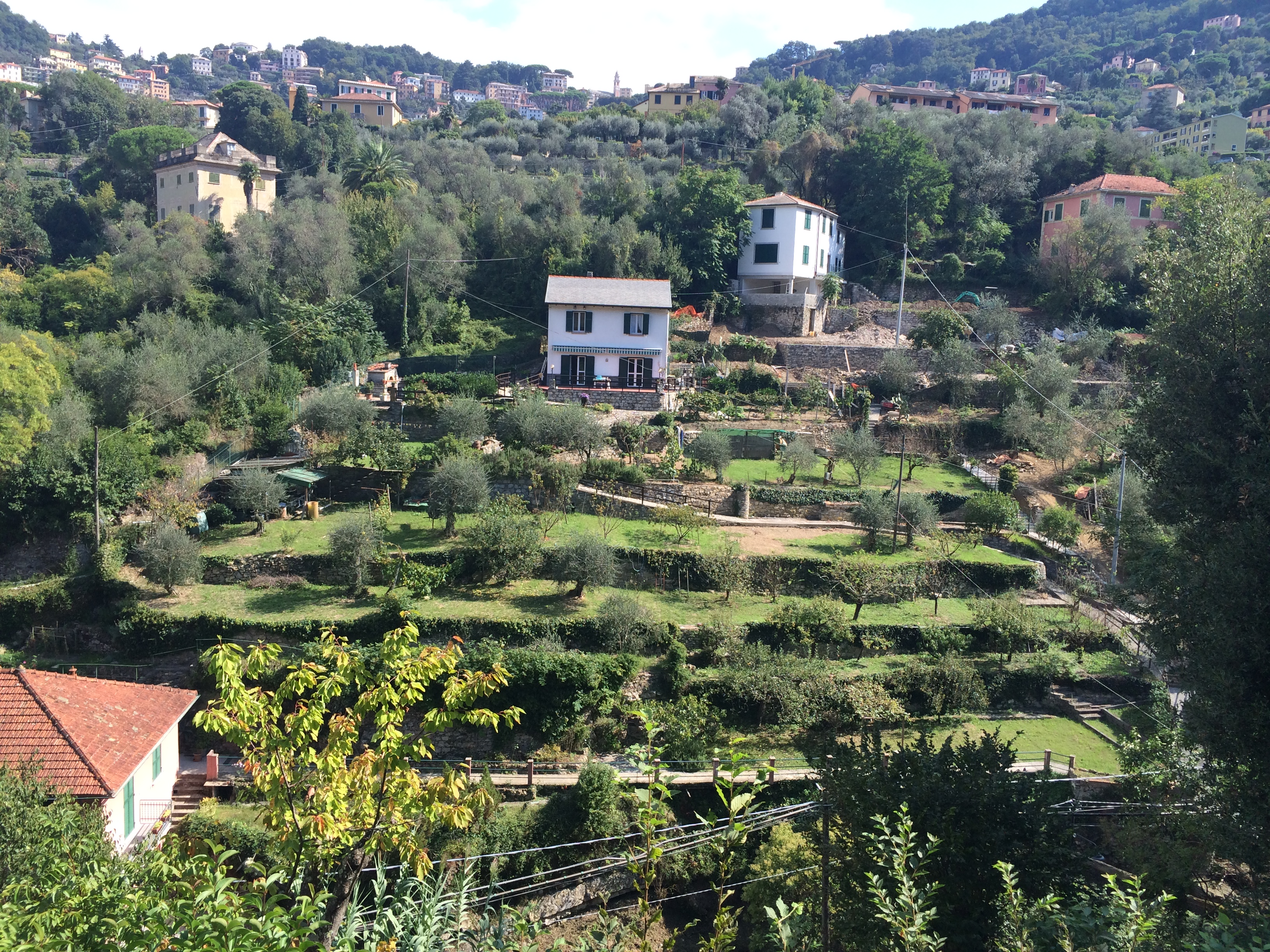 In one place the wall along the path was built so that a tree could grow through it, suggesting that parts of the path were former terraces. 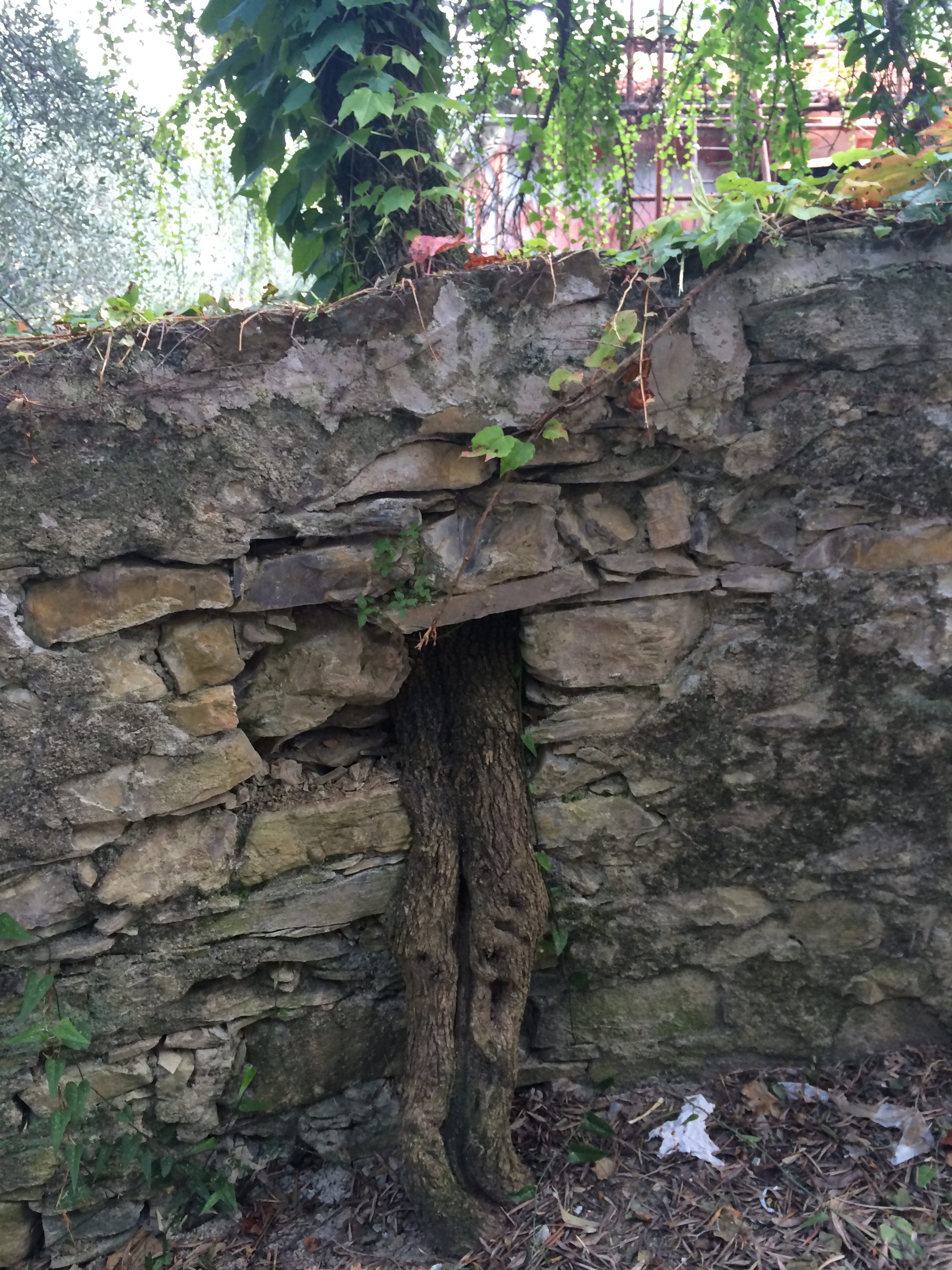 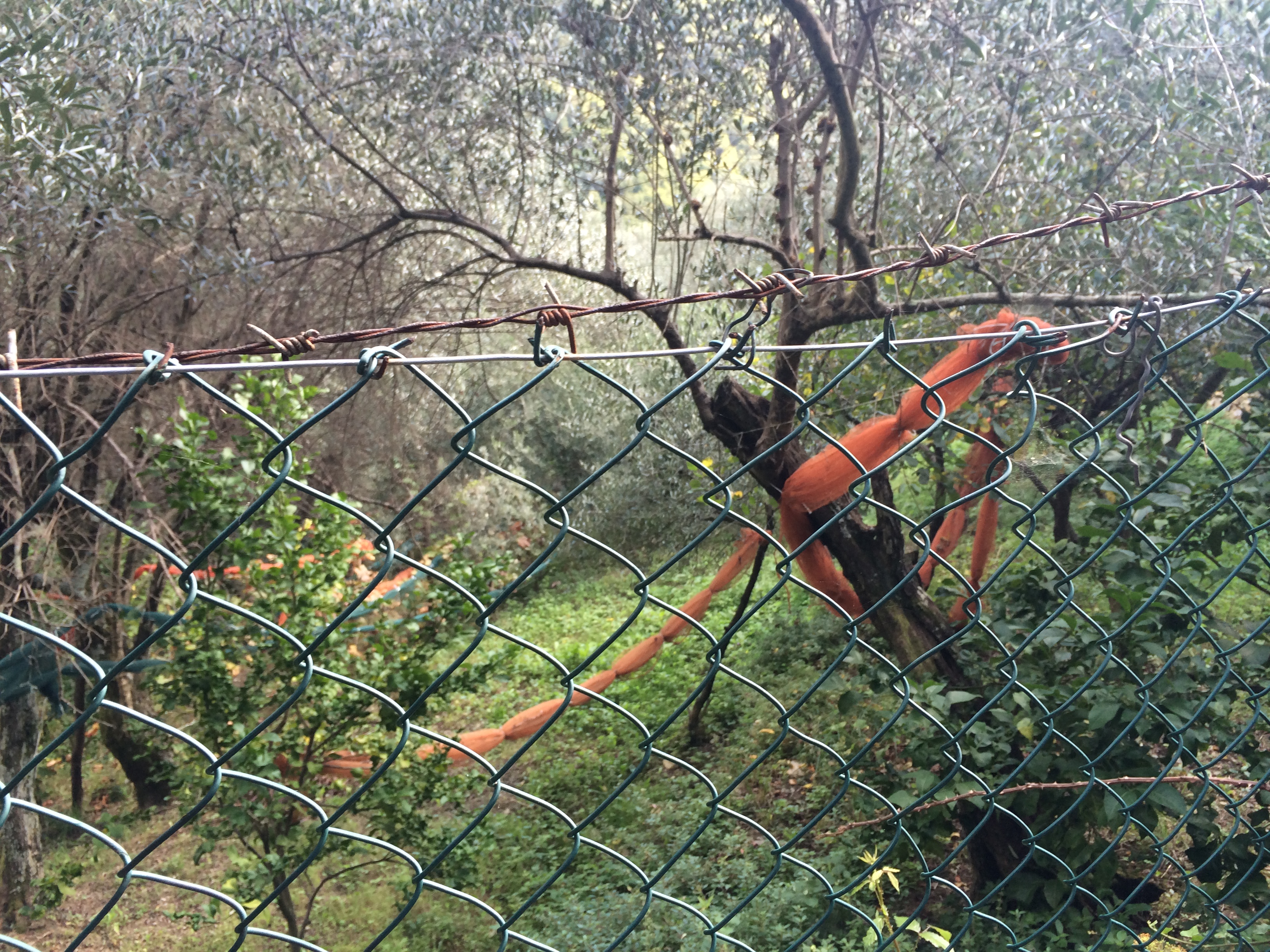 The path leveled out at San Rocco, which had a church whose idolatrous decoration helps explain why many Protestant houses of worship are plain and simple.  There were a few houses, shops, and cars too, so there was obviously another way to get there other than the one we took. 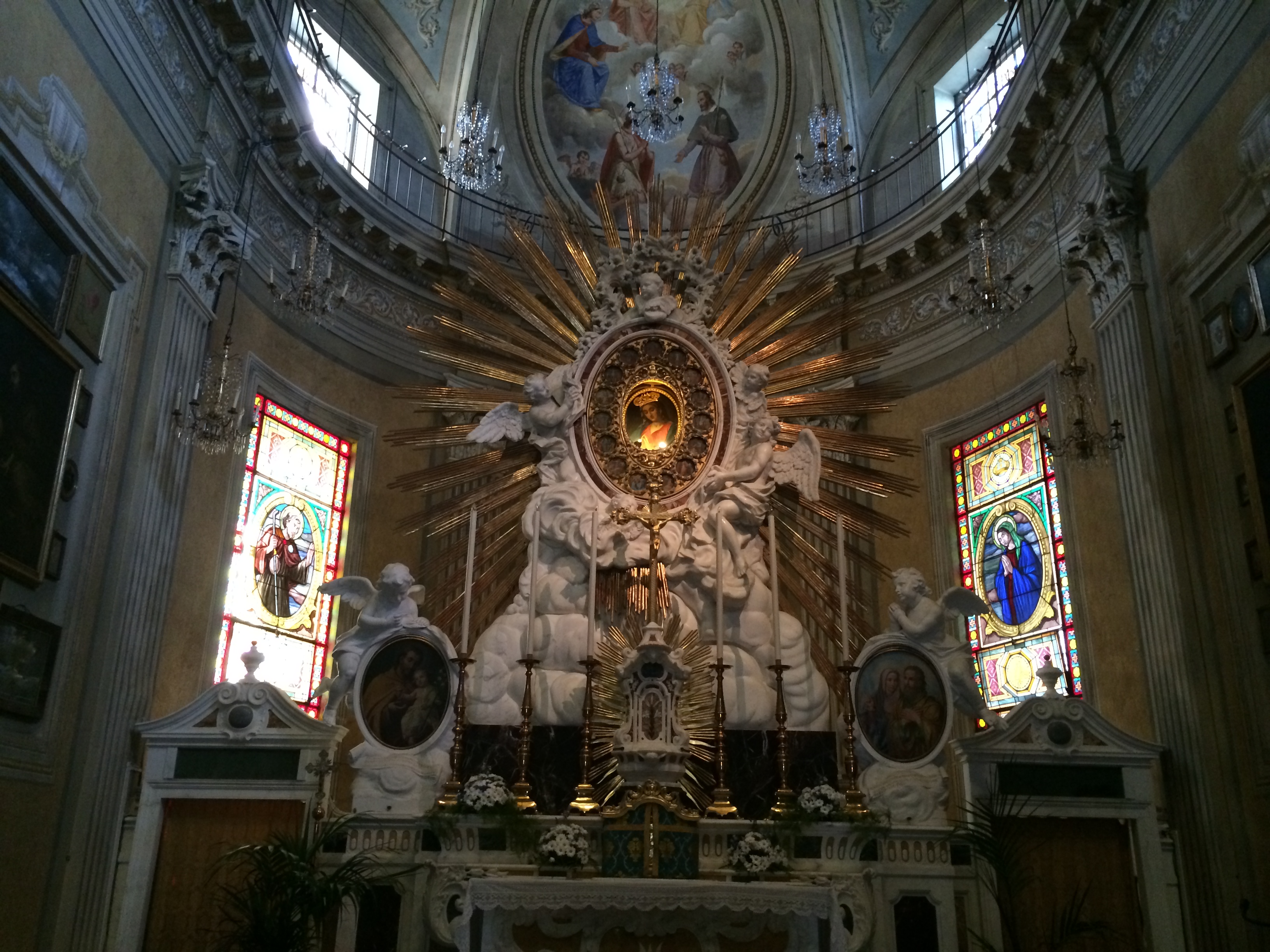 A woman at the tourist office in Camogli had told us there were two trails to San Fruttuoso—an inland one that was manageable, and one along the coast that required holding onto ropes in places.  She recommended against that one, but we decided to take it anyway.

It was steep in places (and flat and downhill in others), with spectacular views. 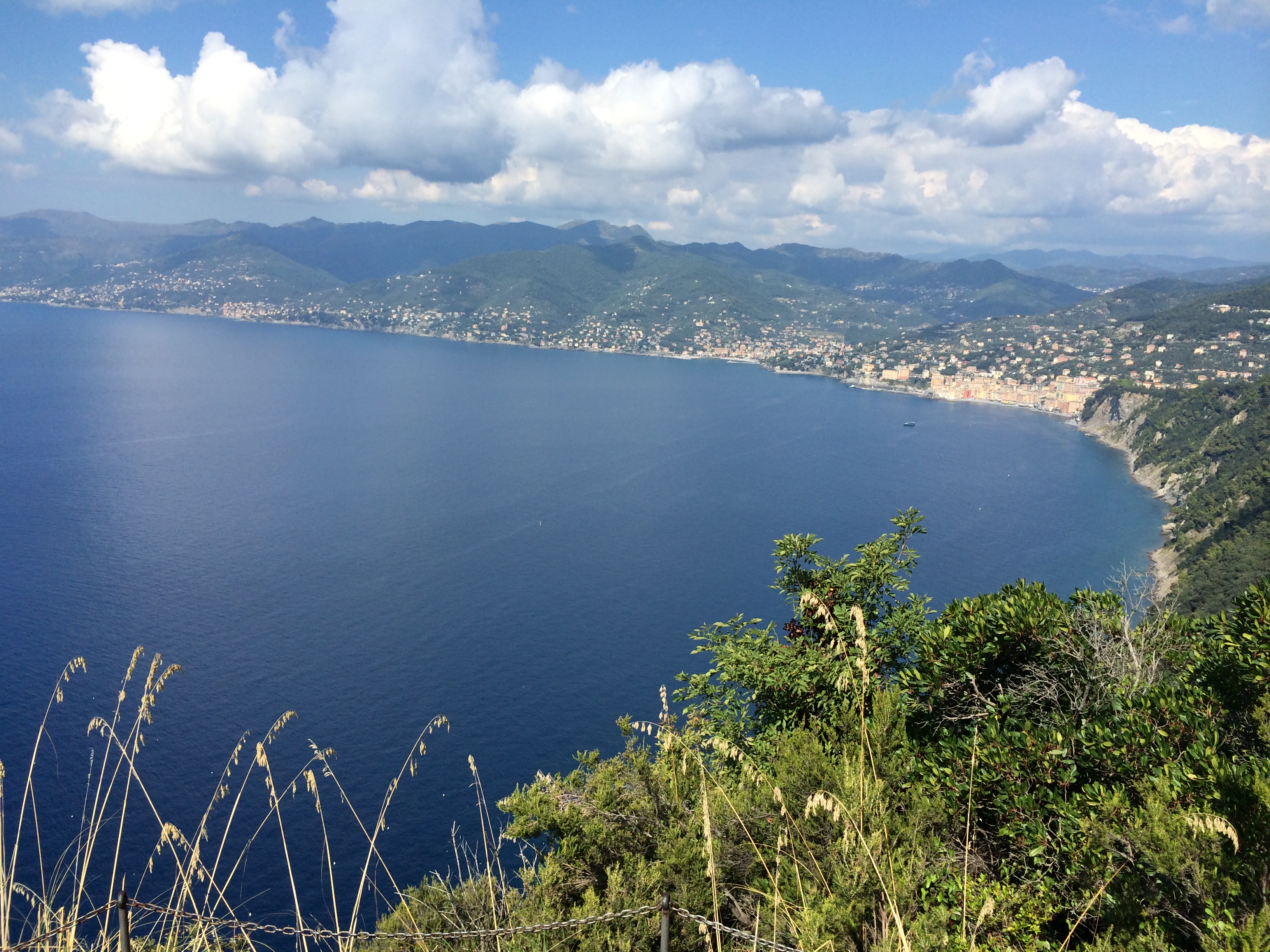 We passed some artillery emplacements with no signage and of uncertain age. 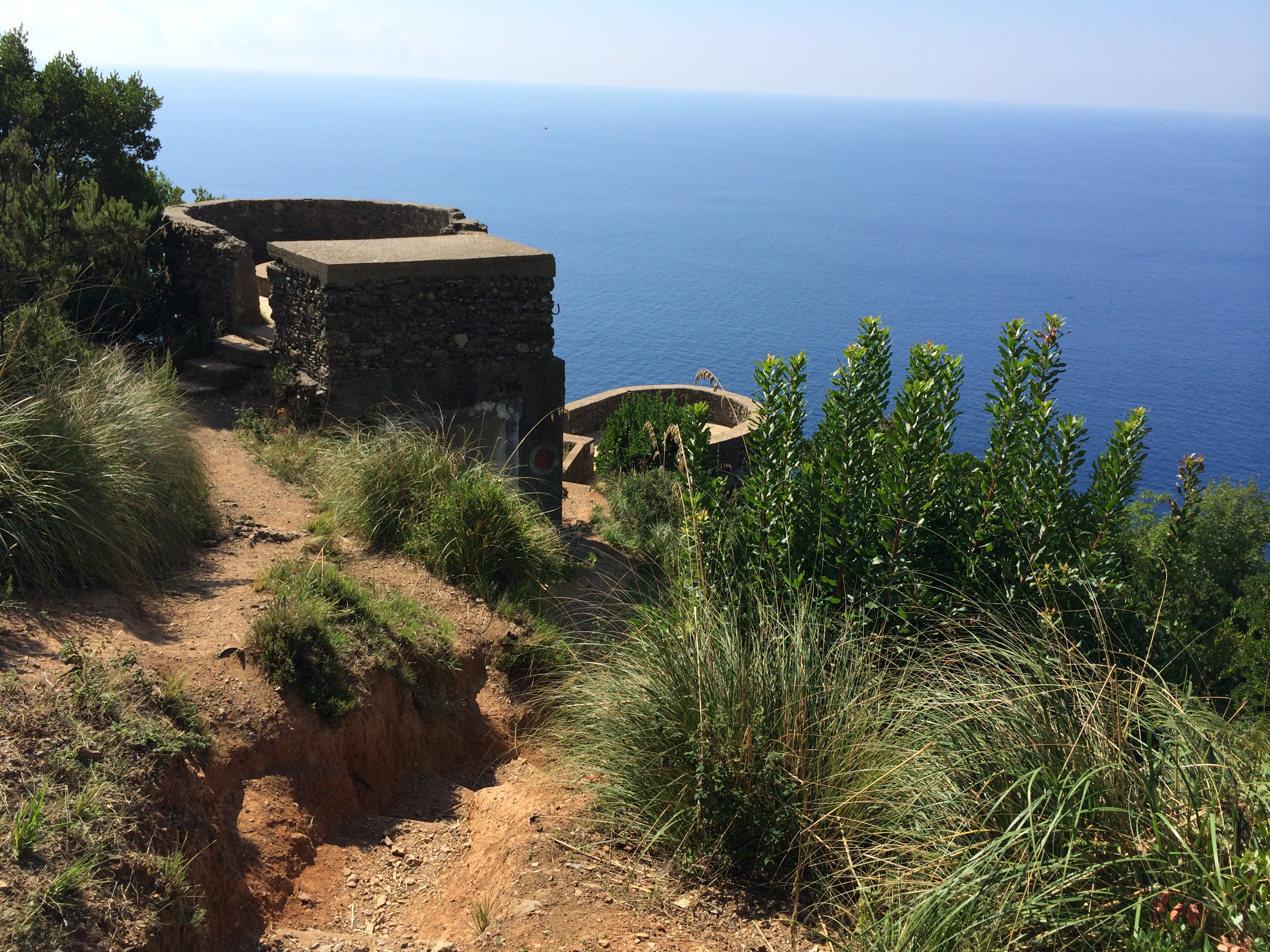 We skirted the base of a cliff made of pudding-stone—rounded stones of varying size cemented together by natural mortar. 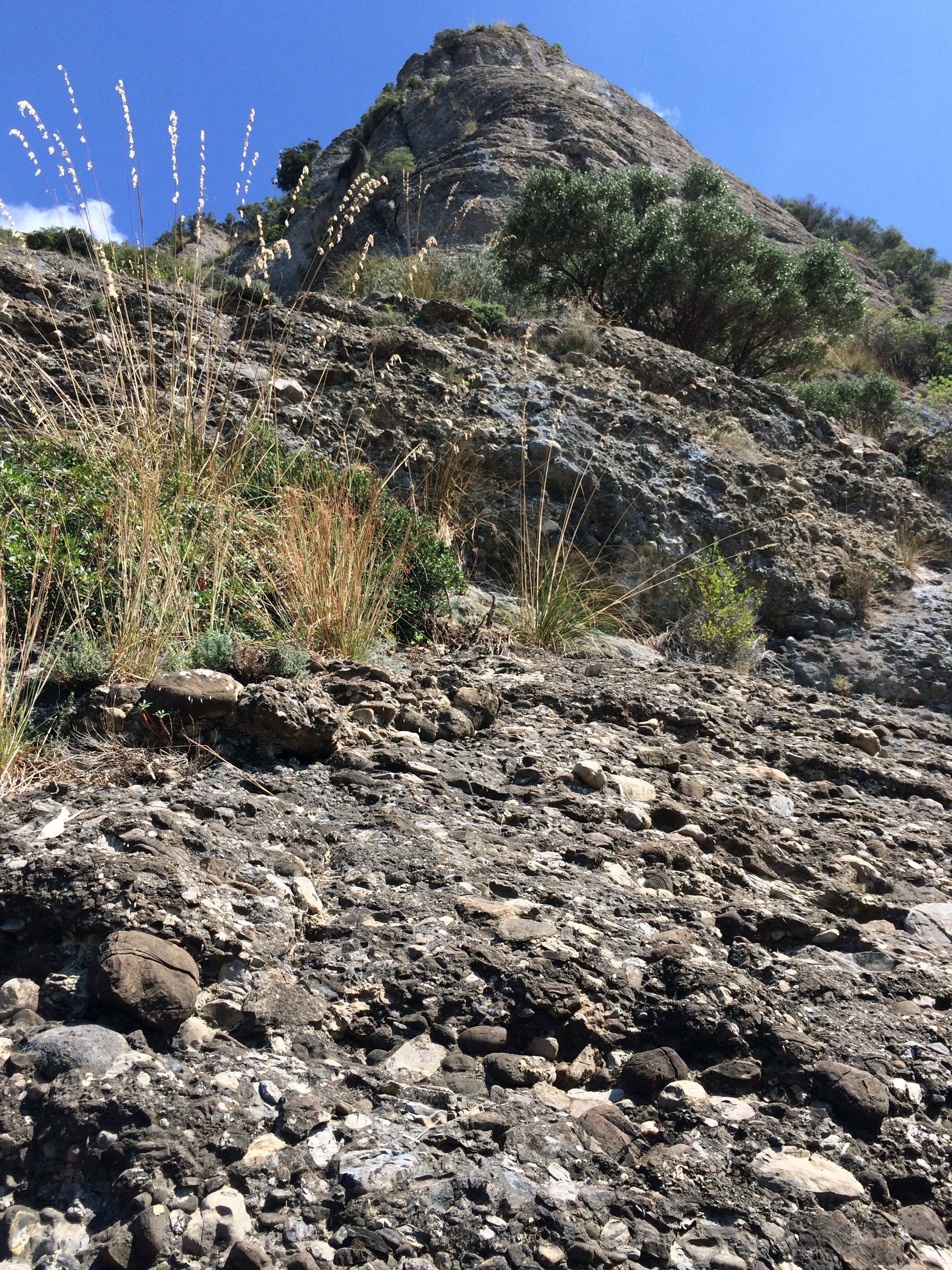 Where the path was extra-steep, canted laterally, or beside a drop-off, lengths of chain had been fixed to the rock. It was possible to get by without them, but they proved reassuring. 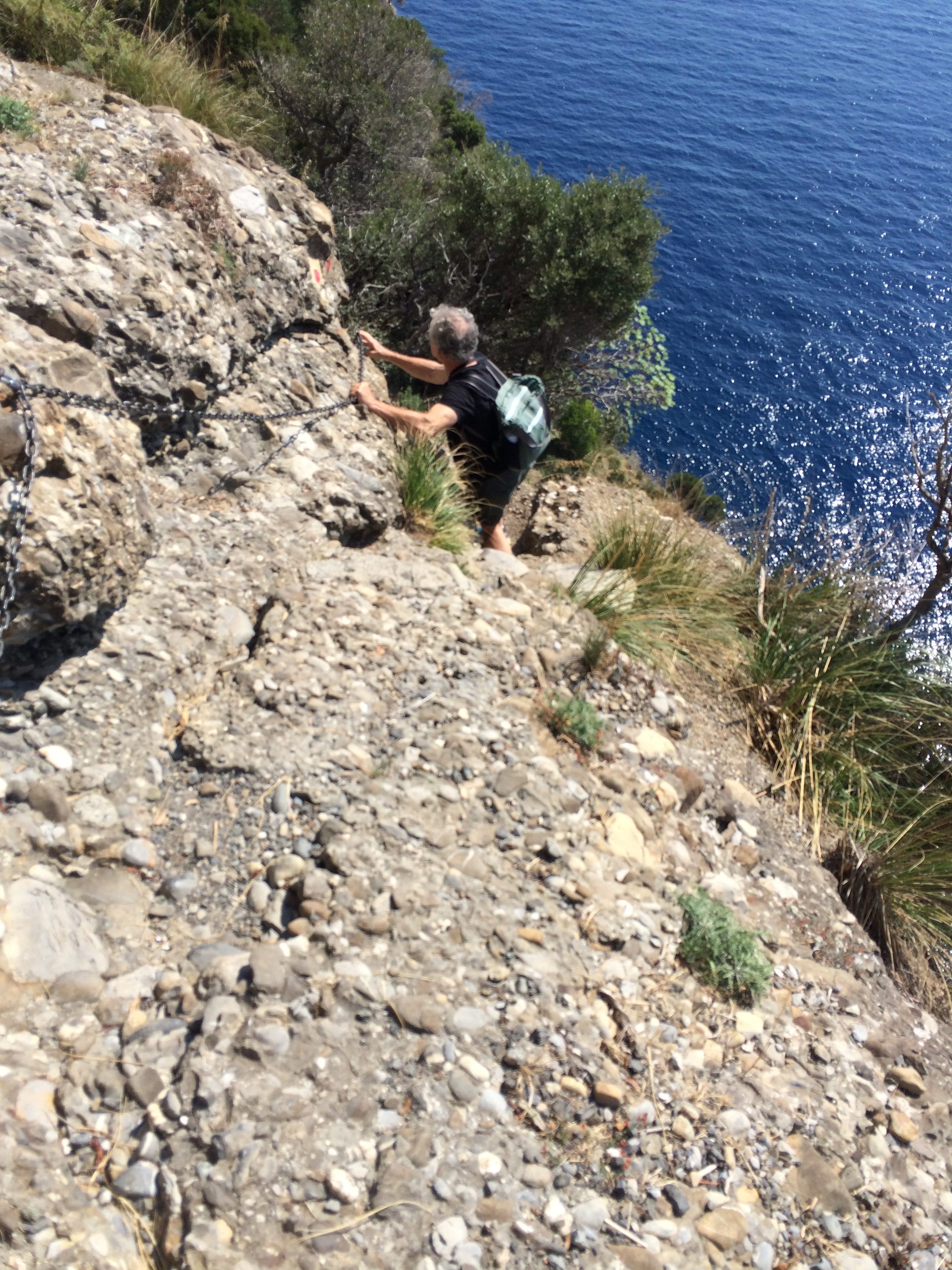 We had lunch—focaccia, beer and apples—sitting on an outcrop and looking down on a cove of azure water lapping the tawny shore. 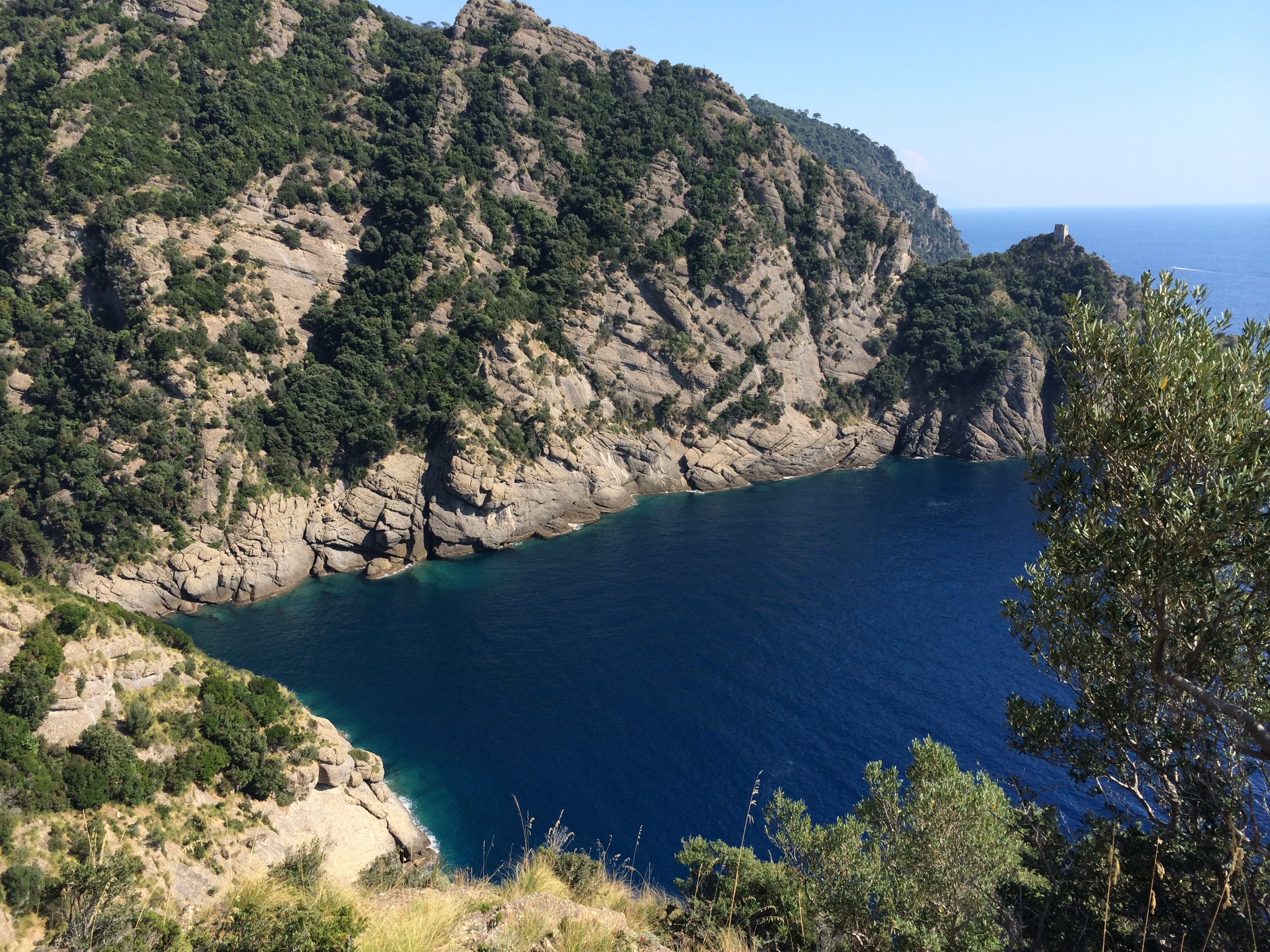 It was a spectacular hike—three hours of hard walking with views as beautiful as we’ve seen.

When we got to San Fruttuoso we poked our head into one of the chapels but didn’t pay for the full show. Instead, we went down to the stone beach and swam and lay in the sun for the hour until we caught a boat back to Camogli. 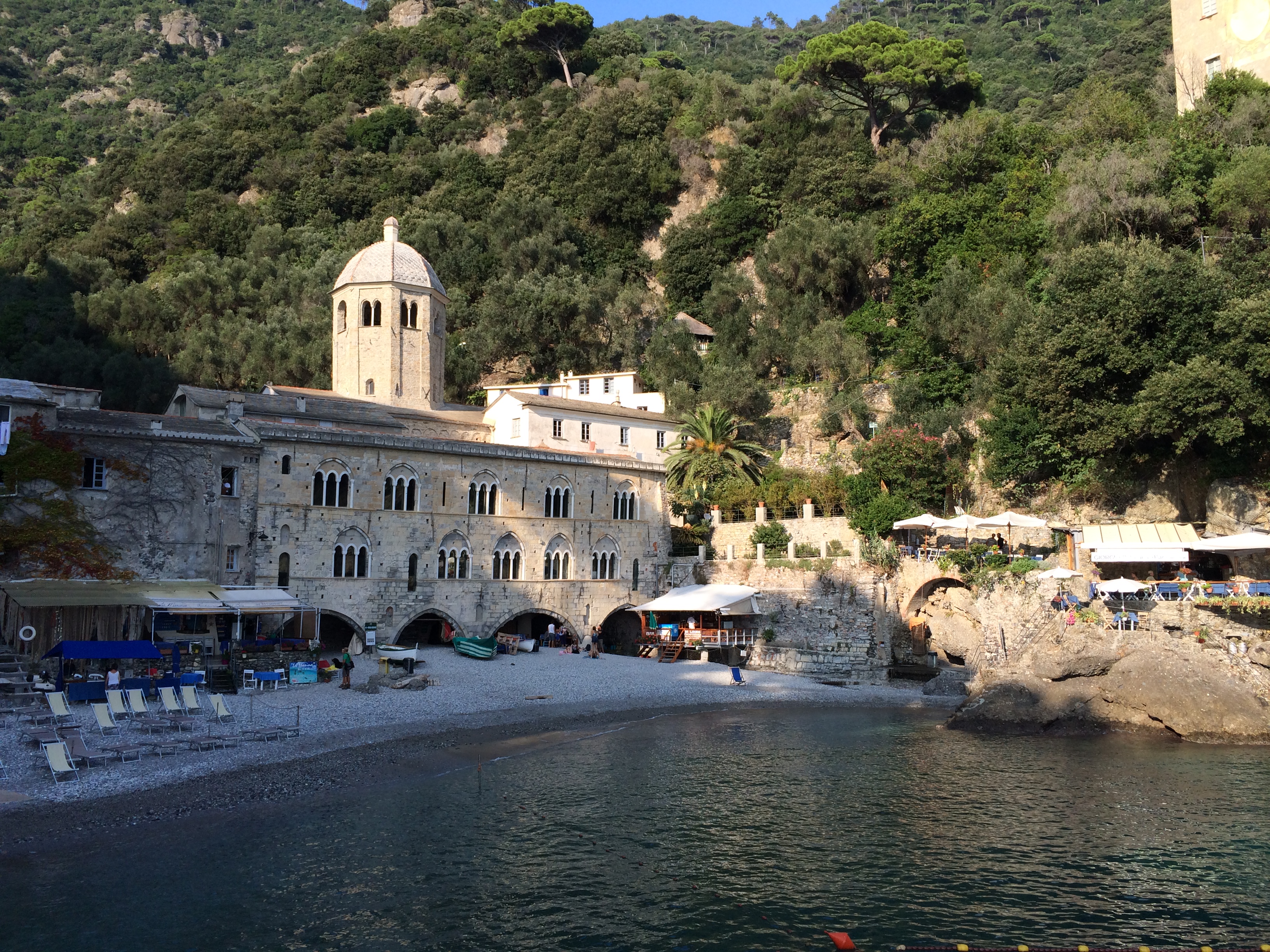 The two food-writer comedians in the movie “The Trip to Italy” visit San Fruttuoso.  The place is better known for something we didn’t see.

Offshore is a statue of Christ in 50-feet of water.  It is a memorial to people who’ve died diving.  It was placed in 1954 near where the first Italian to use scuba gear, Dario Gonzatti, died in 1947.  It can sometimes be seen from the surface.  This is a model of it in the abbey. 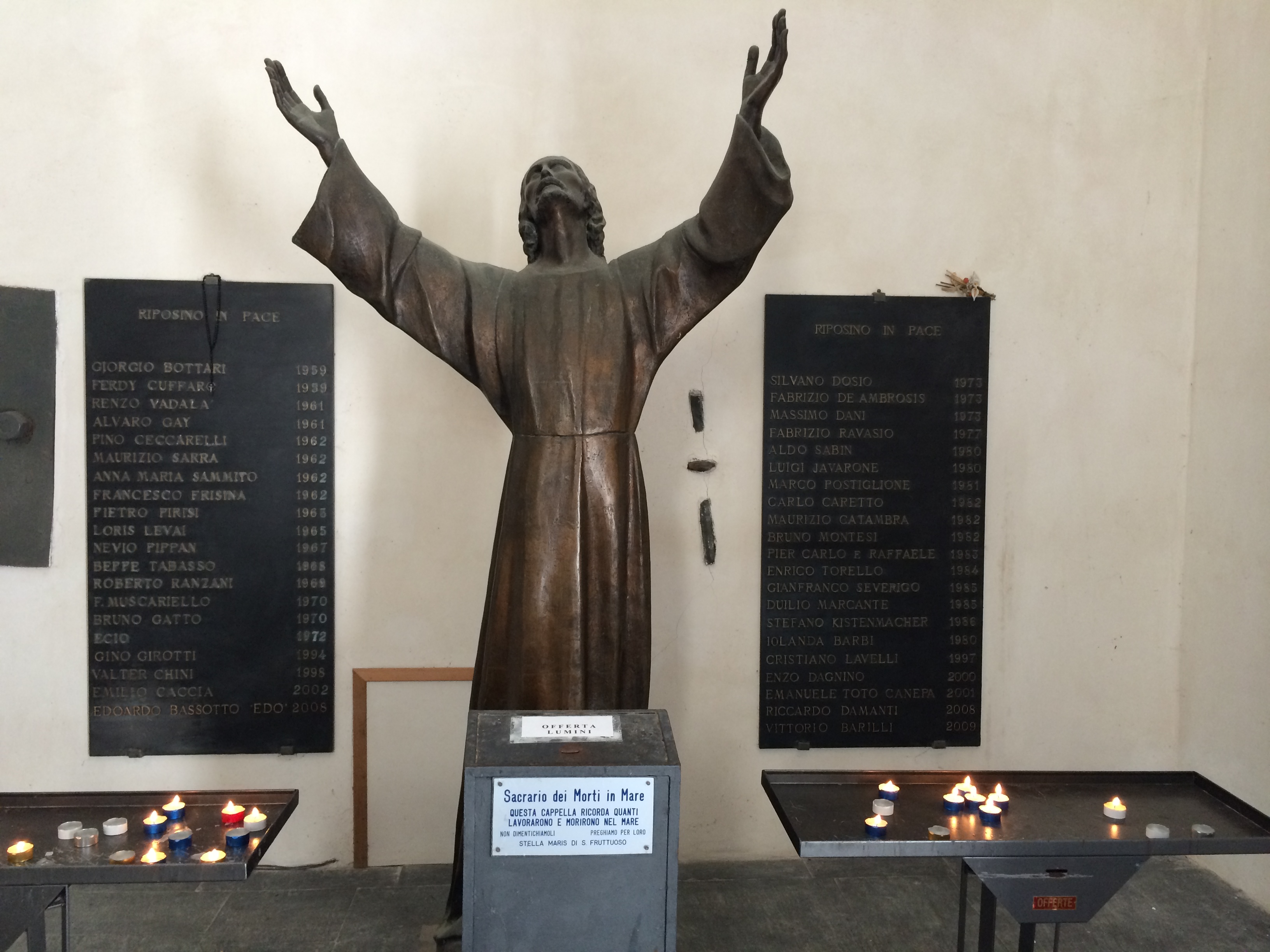 Flushed with a sense of accomplishment, we went prowling for the right place to eat that night when we got back to Genoa. We found it.  It was a restaurant called “the Cardamom” (reason not obvious) near the hotel we’d moved to after the tour ended.

It had a couple of bright but stuffy rooms and an outdoor seating area, all below street level. We decided to eat “al fresco,” which in Italy now means “with smoke.” 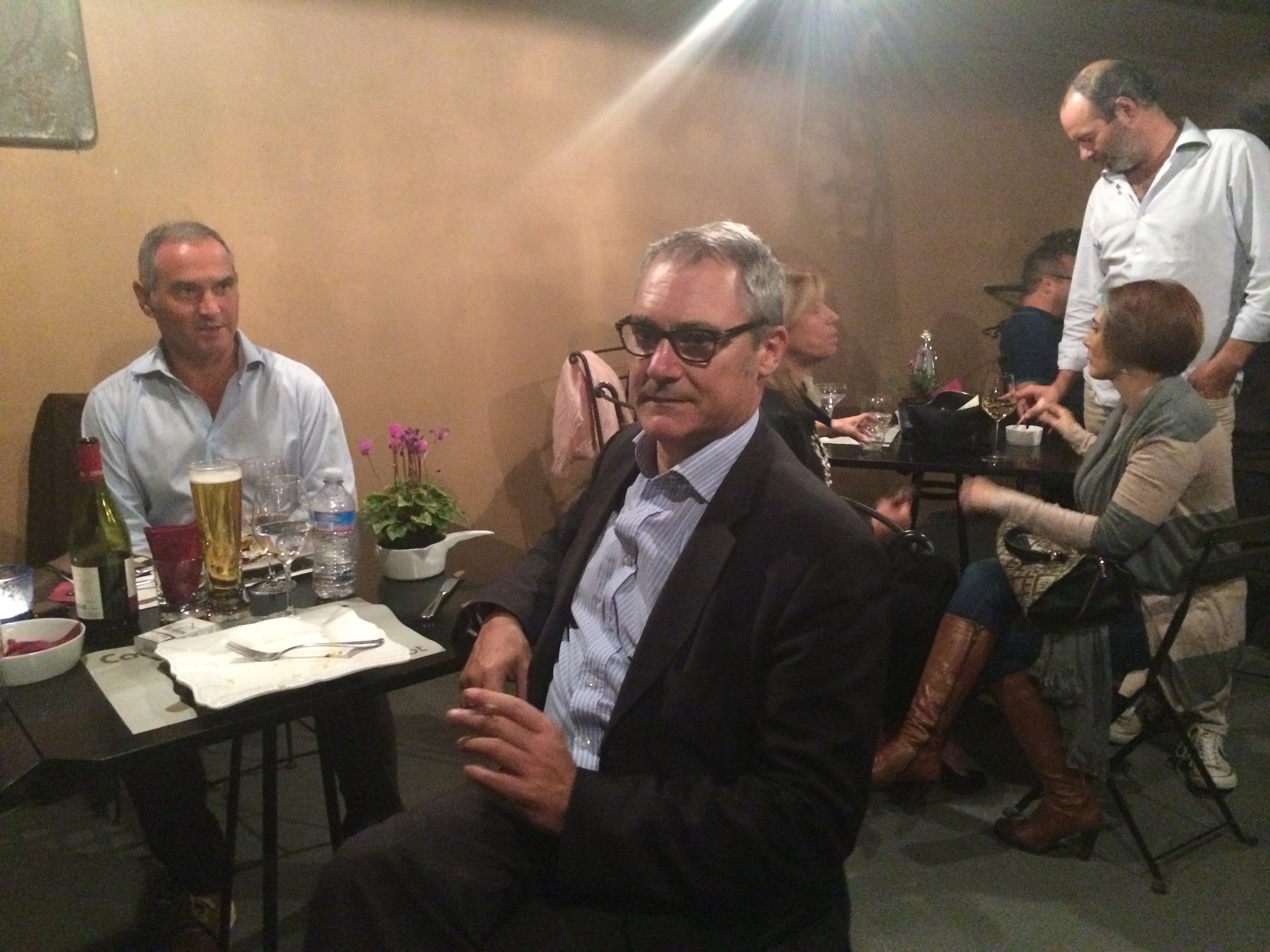 Just about everyone at the outdoor tables smoked. And they smoked the old-fashioned way, with cigarettes between courses. We didn’t mind this.  In fact we had moments of hilarity as we commented on our off-island identity. 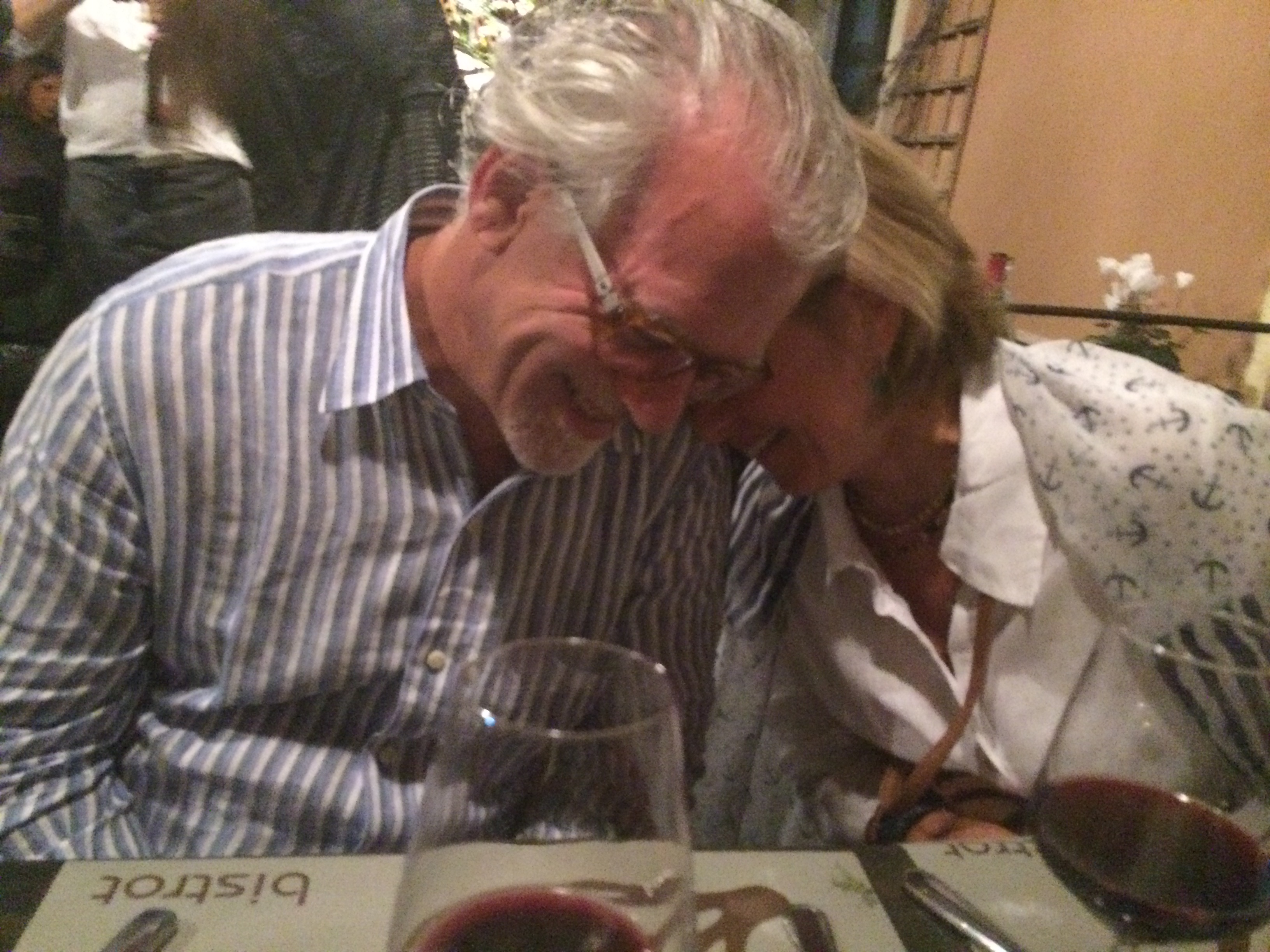 We got the last available table. It took us a while to get waited on. Nobody left when they finished eating.  And more people arrived. 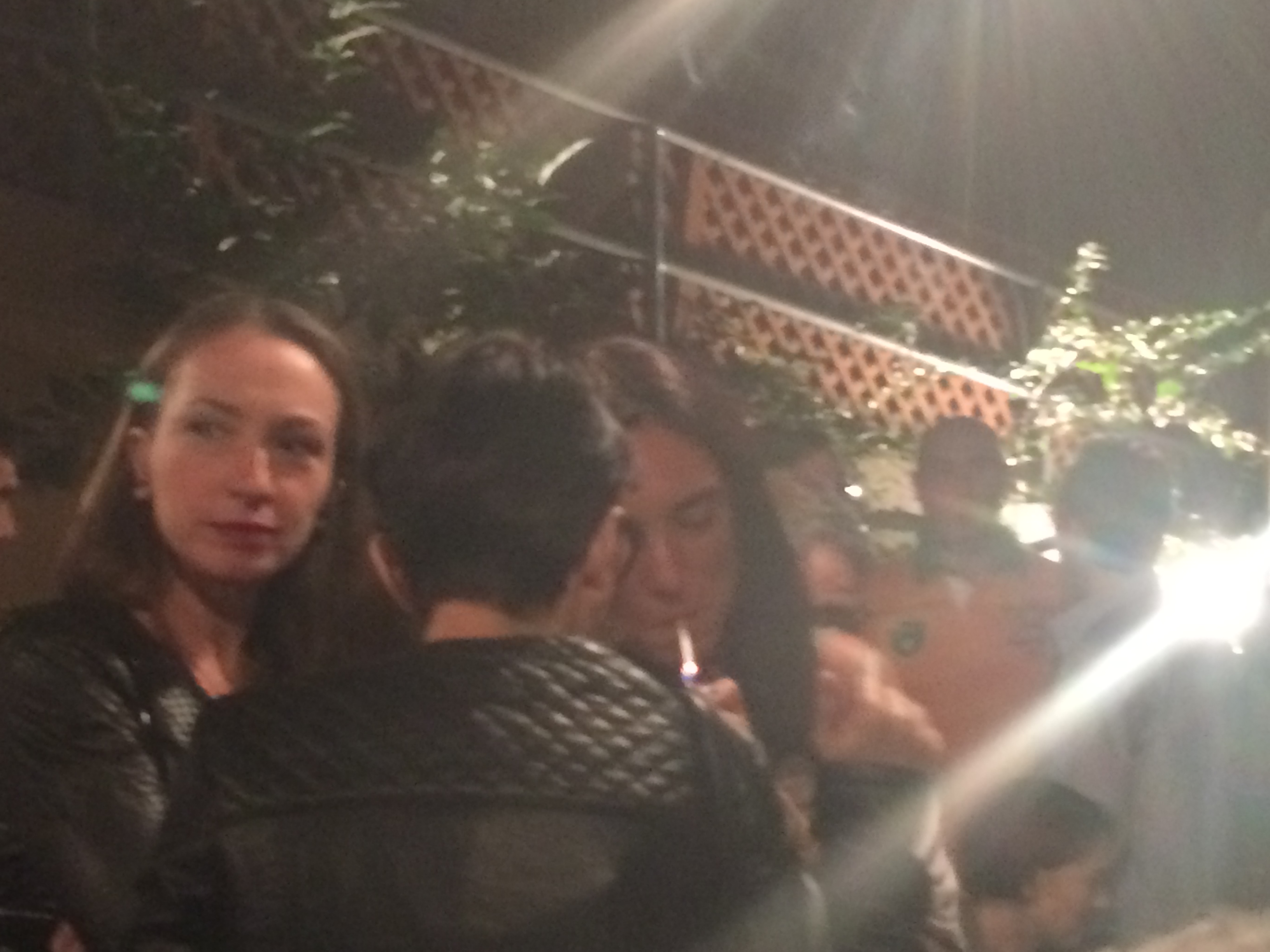 It turned out Thursday was live-music night at the Cardamom.  Tonight it was going to be the blues. The band, Snake Oil Ltd., was a local one and featured a singer who’d been in a better-known group called Big Fat Mama. (All of this from our waiter, who also smoked).

They started playing about quarter of eleven. They were pretty good. We actually went inside and danced. 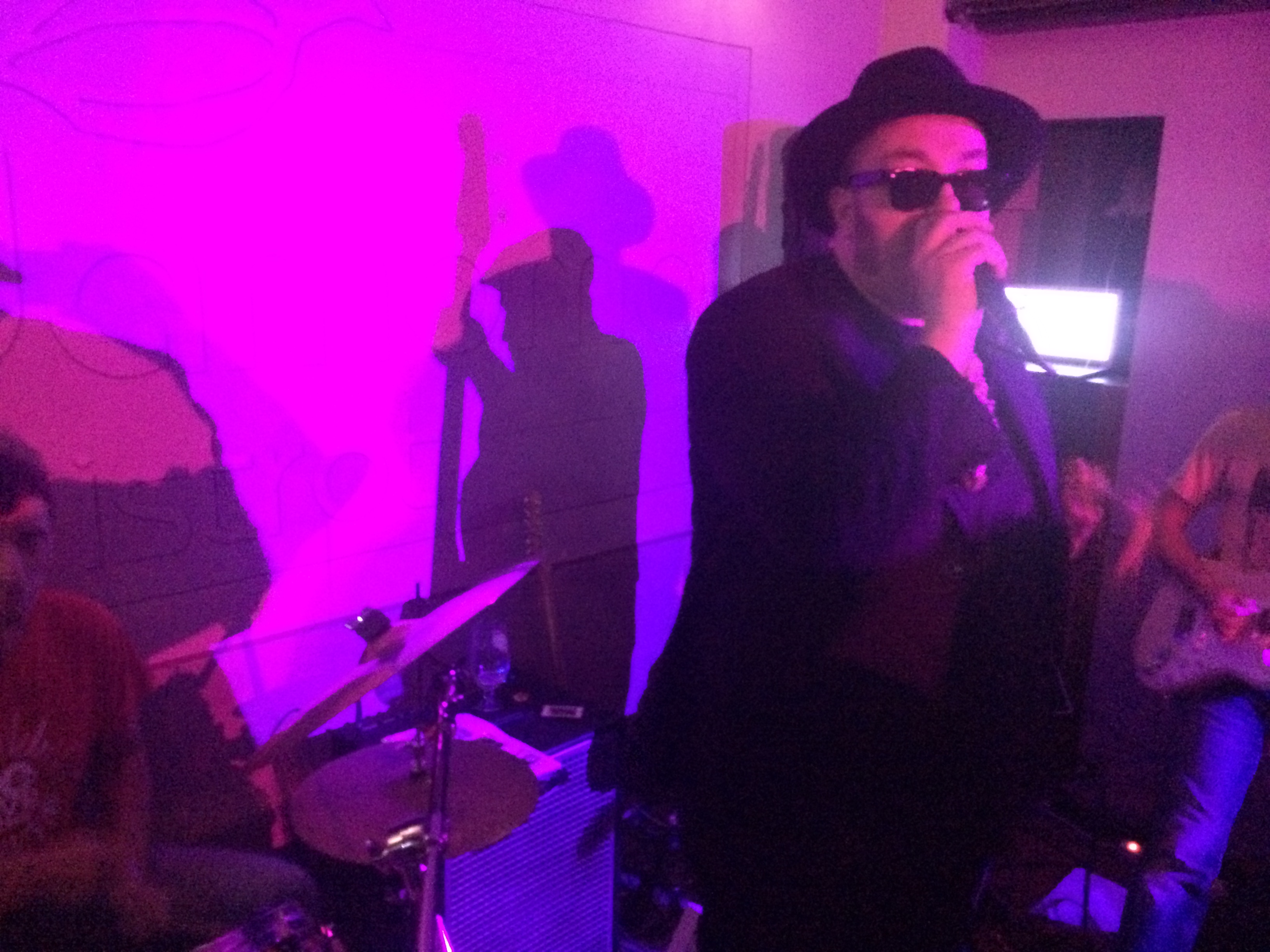 Dancing to a man dressed like Jake Blues and singing Buddy Guy—it was a scene designed to ease us out of Italy and get us on our way home.