I’ve walked across Scotland four times in an event called “The Great Outdoors Challenge” sponsored by a magazine called The Great Outdoors.  About 320 people participate in the TGOC, leaving from one of 12 starting points on the west coast and ending anywhere on the east coast between the towns of Fraserburgh and Arbroath.

There is no single route across the country like the Appalachian Trail or the Pacific Crest Trail.    Instead, hikers create a route from a variety of starting materials–footpaths, ATV trails, ancient “drovers trails” and “stalkers trails” used for herding and hunting, logging roads, paved roads, even highways.  Some routes feature stretches where there are no paths at all.  In those areas walkers must navigate by line of sight, map and compass, or GPS.

The route I took in 2014 and 2015 were borrowed en bloc from a 10-year veteran, Roger Hoyle.  I learned of the Challenge when I met him in Moscow in October 2015.  His son was a foreign correspondent there and I was visiting two foreign-correspondent colleagues from The Washington Post.  I sat next to him one night at dinner. By the time the coffee was finished I’d decided to give it a try.  I could not do this, and would not have tried, without Roger’s transatlantic hand-holding.

The chief service of the event’s organizers (all volunteers, of course) is to give advice on route-design.  That is done by experienced hillwalkers, some of whom appear to have total recall of the landscape.  A route, with “foul-weather alternatives” for sections where rains can make rivers  uncrossable, must be submitted three months in advance and be approved.  Walkers are also obliged to report in by phone to Challenge Control four times during the walk.  One-quarter of the walkers go alone.  Given the nature of route design, however, meeting people along the way is inevitable (not to mention desirable).  That was my experience anyway.

In 2014 I took a classic route, from a fishing village called Mallaig to St. Cyrus. In 2015, I started farther north, in the village of Strathcarron, finishing in Stonehaven.  Both routes are shown on this map.

In 2016 I left from a place between the two previous starting points, angled northeast to Inverness, and then crossed along the Moray Coast to Fraserburgh. It is a beautiful stretch of coastline, with sandy bluffs, wide flat beaches, and sheer rock cliffs.  The beaches were the site of the early rehearsals for the D-Day invasion. I wanted to see that and, if possible, talk to people who remember those days. I found one.

I then took two years off.

In 2019, I took a route in the far-southern edge of the permitted territory for the walk. I left from Ardrishaig, on Loch Fyne, and ended at Lunan Bay, a huge crescent beach south of Montrose. Most of the route was cribbed from Jean Macrae Turner, a retired surgeon and wonderful person whom I’d seen on two earlier crossings. At age 79 she was the senior woman finisher in 2109. 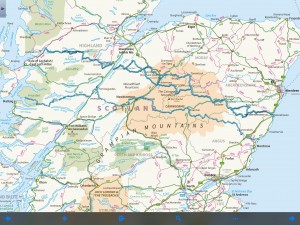